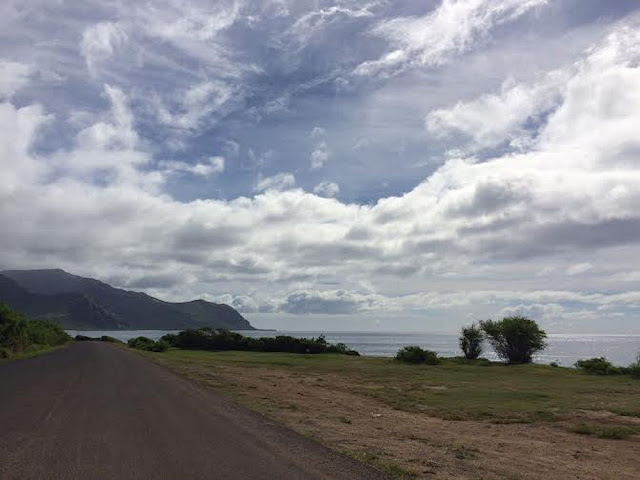 We have been home for ten days and our time in Hawaii is fast becoming a distant memory.  Sometimes Gregg and I say it is hard to imagine we were even there.  I have a whole lot of days that I will be writing about, and hopefully you won't get too bored with it all.  There will be some that will no doubt be a bit more boring than others.  It's a journal and one I intend to look at many times over the years along with my family, and friends are always welcome.  I will probably say why the heck did I put that in there ten years down the road, but I decided to go ahead and add the mundane, and hopefully you will find the whole sort of interesting.

We left the hotel early in the a.m. and returned at 5.00 p.m.  A long day for us and we had a quiet evening.  Our dinner was ham and cheese sandwiches from the little shop downstairs, and we added a small pre-prepared package of celery and carrot sticks, which also came with tiny cubes of cheese, along with a bottle of water.  It made a nice supper because we were so tired we didn't have the energy left to go to the restaurant.  I guess we are still working on that time change.

We started off going to the Ala Moana Hawaii's Center, a shopping mall which wasn't too far away.  I remembered they had a Papyrus greeting card shop 12 years ago and as they had closed the one near us, was curious to find if this particular one was still there.  Delighted to say it was, and loving their products I had fun browsing, and bought several greeting cards.  We also bought one of those selfie-sticks, which we never even used.  Long story for another time.  We also needed a few other things.  Gregg was interested in buying a book and while he went looking I sat in the coffee shop and read a magazine.  Neither of us are normally into shopping malls, except for short trips when absolutely needed.  The Ala Moana is a great one to browse around.

On our way there we passed the Hawaiian Museum of Art and it looked very interesting.  We thought we might go sometime (as it turned out we never did, we just ran out of time). 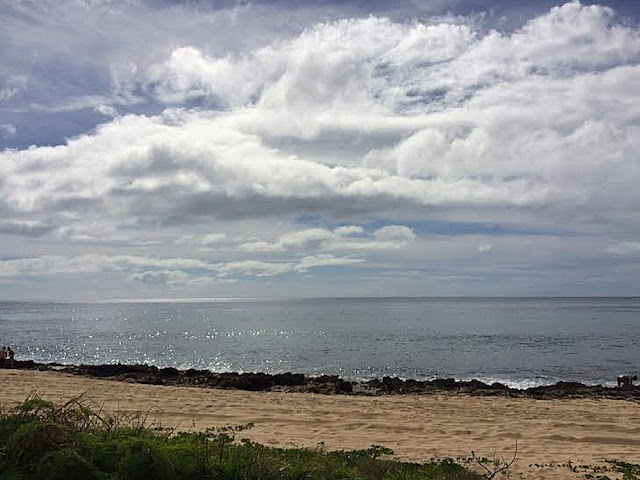 We drove on the south western side of the island today, and went as far as the road took us.  There were more gorgeous views along our route.  We saw a mongoose run across the road in a non-populated area.  No photos, they move fast! 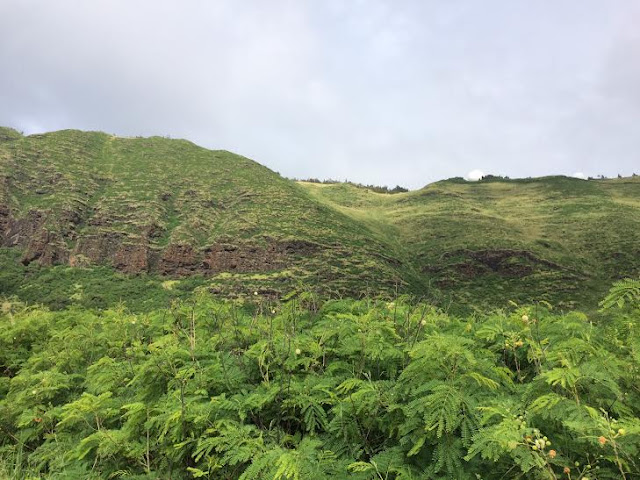 Mongoose have a very bad reputation here. Sad really but they have been devastating to the natural order of things.  I am familiar with Rikki-Tikki Tavi from The Jungle Book (the Jungle Book being one of my all-time favorites as a child), know that they look a bit like a weasel, and that they are a native of India, but that's as far as it goes. 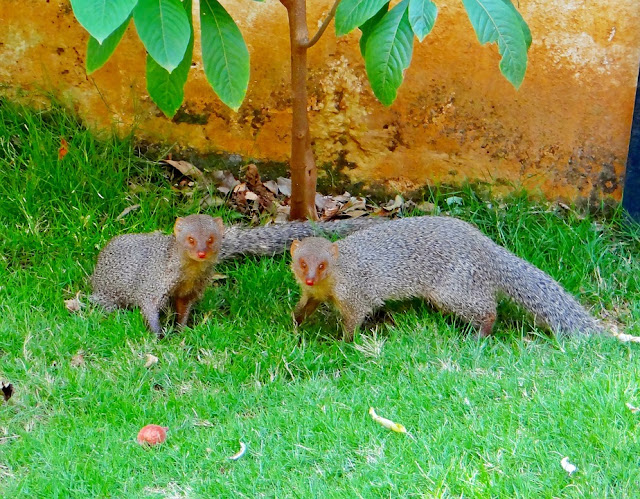 The Mongoose was introduced to Hawaii in 1883, when the sugar plantations were seeking help to control the rats in the cane fields, and like so many introduced species back in the 1800s, no one knew the incredible damage that would cause.

The effects became apparent later.  Mongoose were day-time creatures, rats were creatures of the night and there lies the rub.  The Mongoose, not controlling those rats, turned instead on turtle eggs and native birds, and their numbers increased dramatically because they have no natural predators in Hawaii.

Kauai's plantations didn't introduce mongoose there, though there have been signs.  In 2012 one was caught in a trap, and a female was found dead on a highway near Kalaheo years before.  I haven't heard of anything since and hopefully all is well, as the ground nesting birds like the Nene Goose seem to be living the good life on Kaui.  We saw many Nene, which was wonderful as I had never seen them before.

Apparently over the last 44 years there have been over 160 credible sightings of the mongoose in Kauai and more than 70 of those sightings have come in the last decade.   My only sightings of them, however, were on Oahu (three times) and I saw none on Kauai.  I would be very interested if any of our Hawaiian friends can offer more insight.  You can read more here. 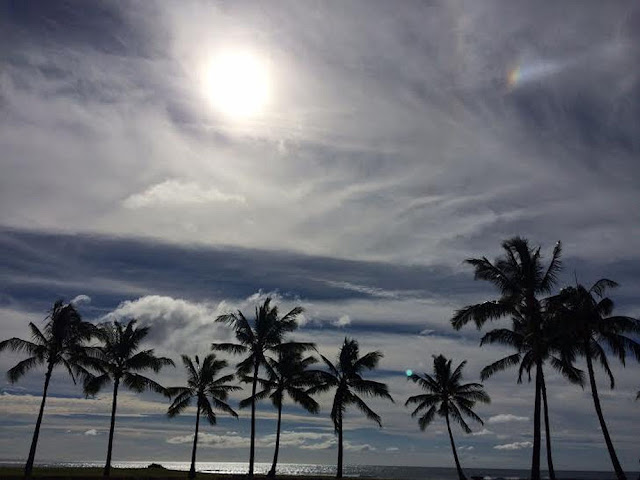 Further along on today's jaunt we were going to go to a restaurant we discovered two trips back, the Monterey Bay Canners Fresh Seafood Restaurant in Pearl City, but the traffic at this shopping area was extremely heavy (pre-Christmas shopping no doubt) and we drove around and around for a parking spot, and around and around, to no avail. 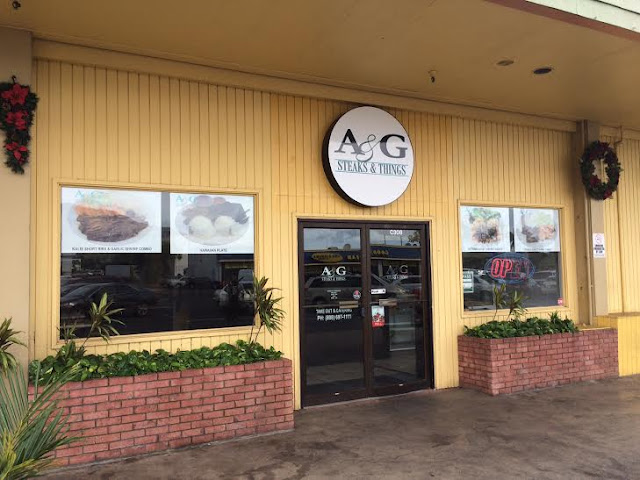 Deciding to drive on we found a place called A&G Steaks and Things in Wahiau, one of those places we had not read about but just came across. It was a fast food for plate lunches.  My meal was rice with thin slices of beef and garlic shrimp, and a salad.  Gregg's was grilled chicken, rice and a macaroni salad.

Both meals were very good.

We had intended to go to Foster Botanical Garden but it would have closed shortly after we arrived. We spent more time at the shopping mall than we had intended, so will head out early tomorrow.

That's about it for today.  Not too much else to tell.

If you missed the previous two posts and would like to read them, you can click on the links below.

Posted by DeniseinVA at 1:24 AM 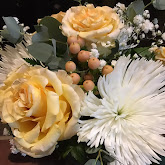