I did a daily journal when I was on vacation, in bits and dabs, here and there.  It is something I have done for years, and I wanted to remember every part of our 40th Anniversary Trip.  I will be sharing each day when I can put a post together.  The letters may seem to be in different sizes, and spacing seems a little off.  I think it has something to do with cutting and pasting from a word document, maybe.  I have tried to correct the problem, which has been difficult, but will continue to try.

Tuesday, December 16th, 2015.  1.15 a.m.  We fly to Hawaii today.  Must get some sleep.  The taxi comes at 3.15 a.m. but I am having a hard time putting my mind to rest.  The bags are packed and waiting by the door.  Have I  forgotten anything?  Will we oversleep?  Will the taxi be on time?  Amazing what runs through one's mind before a journey. 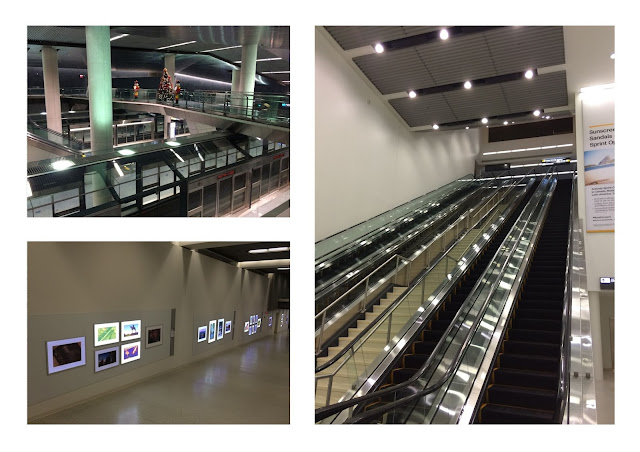 At the airport it was busy for the time of the day at check-in and security, but as we walked to the boarding gate there was hardly anyone around.

We were soon on the plane and in the air.  Not much to see, it is still dark out there. 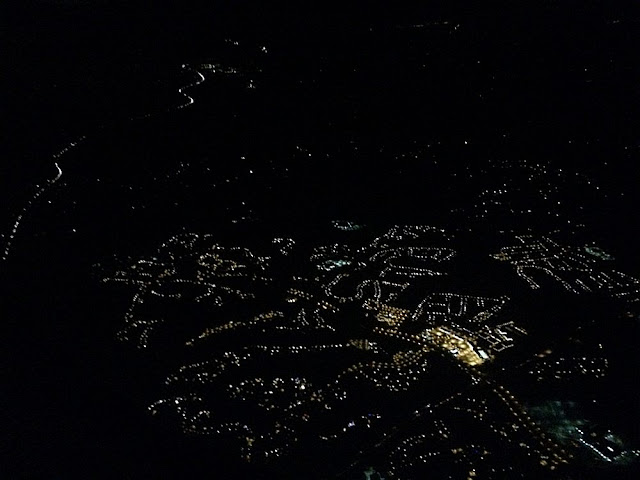 but a lot of twinkling lights at first. 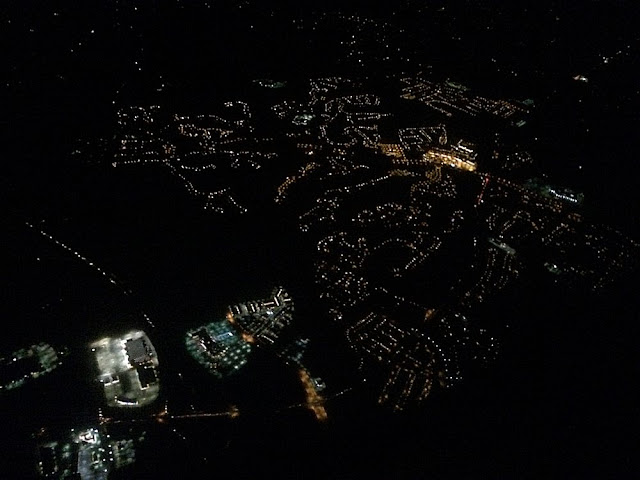 9.55 a.m. we are now in Houston and have just boarded our connecting flight to Hawaii.  It was an easy check in at Dulles, but very thorough.  The customs agents were friendly and polite.  Gregg and I were a little surprised that we were put in the express line to go through.  He said with a chuckle it must be our age.  We were 20 minutes late getting into Houston and had to hustle.  A band of bad weather caused the pilot to circle around and fly in from another direction.  We had a female pilot who gave us a smooth landing.  We had been sitting next to a lady who, with several other passengers, were in danger of missing their connection to Mexico, though there were so many of them we are hoping they held up the plane, and wished them the best.  Those of us who were not on that flight and had more time, were asked to remain seated to help those people to get off the plane first. 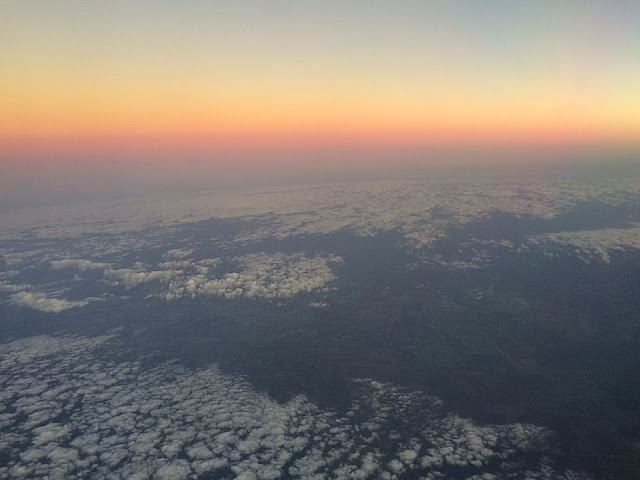 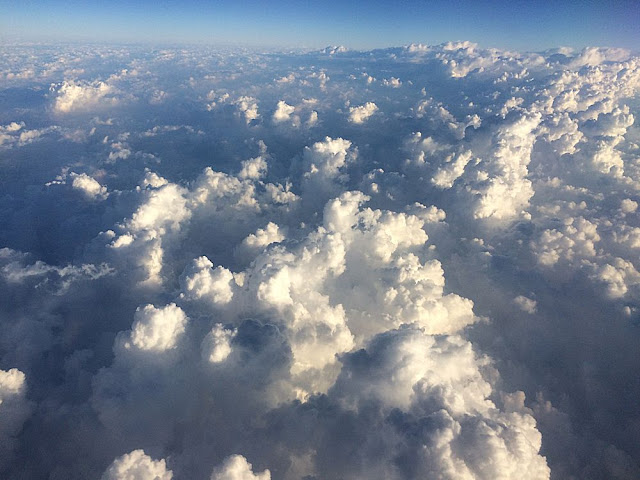 I have been very interested looking out the window. The clouds were beautiful on the other flight and there was a lovely sunrise. 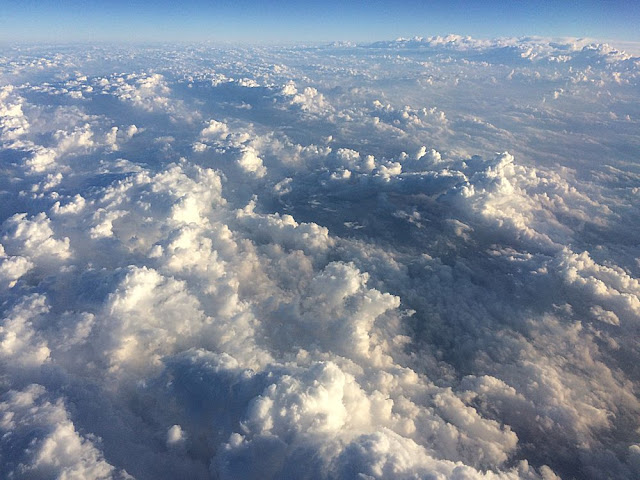 On this one we can see more of the land. 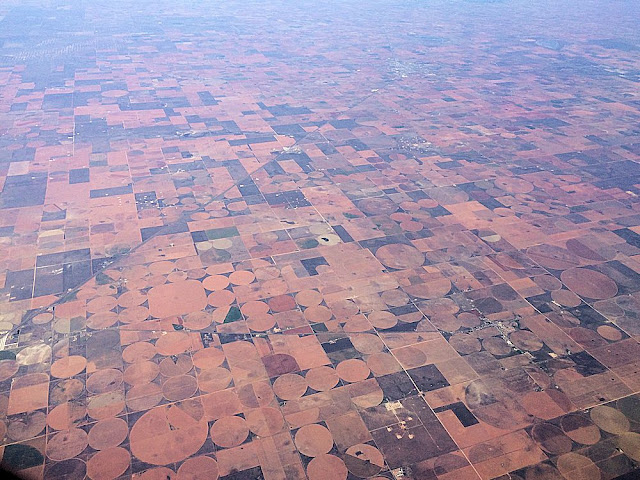 and in one area fields designed in circles, for irrigation Gregg said. 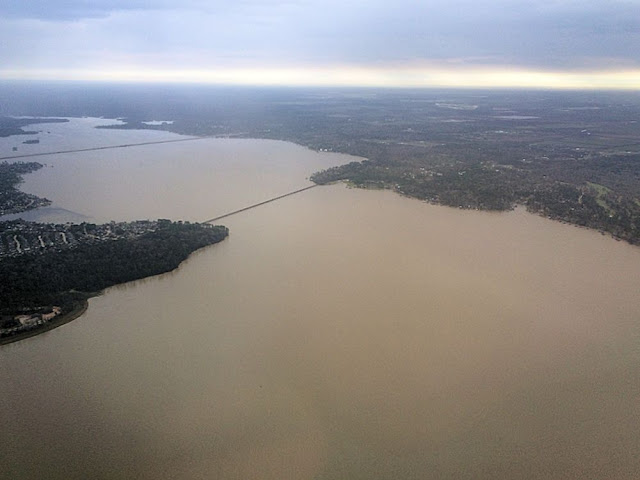 Out of Houston we crossed a great expanse of water, an opening to the Gulf of Mexico perhaps.  Not sure what the water in the following photo is.

Everyone on this plane looks tired, including us.  The smaller passengers tend to keep their parents busy.  One little chap was doing a run several times down one aisle and up the other.  Mom and dad took turns following him.  He looked like he had just learned the great adventure of running and was moving really fast.  We counted four laps before his mom persuaded him to sit in the seat, but he was still struggling to get out for a while, and then finally fell asleep.

When we get to the hotel we will have a very welcome shower, get some rest and have a walk on the beach.  Maybe a Mai-Tai at the Barefoot Bar that we remember from our previous visit.  Hopefully it is still there.  Gregg and I have made a list of what we want to do on our vacation.  We have accumulated a big folder on my laptop to look through. 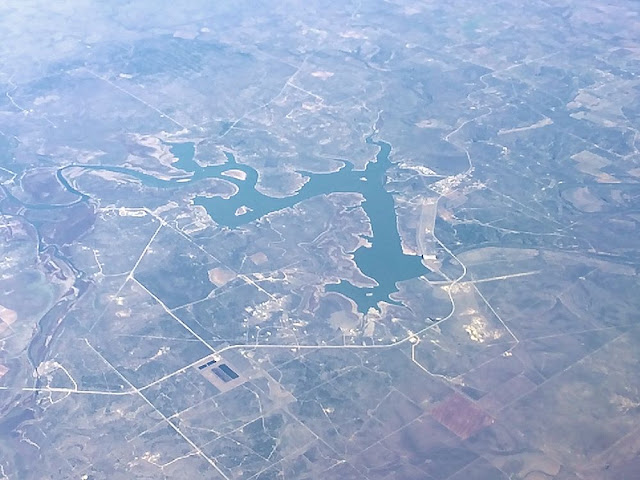 The flight attendants are bringing around food. Neither of us had time to eat breakfast and we brought our appetites. This is a big plane, a Boeing 7777-200. They started at the beginning of the plane and we are seated in row 50.  It is going to be well received. The seats are bigger on this plane and there is more room for our knees. The other plane we felt like sardines in a can, having to make room for another row of sardines. Dreadfully cramped and uncomfortable and I pity the person who is tall.  This one feels like a lazy-boy in comparison.

Our meal was a wrap and a salad for Gregg. He didn't like his red grapes or the little wrapped chocolate truffle.  Guess who had those?  I had a very nice hot ham and cheese sandwich on a hotdog roll.  We have to pay for meals, a sign of the times. 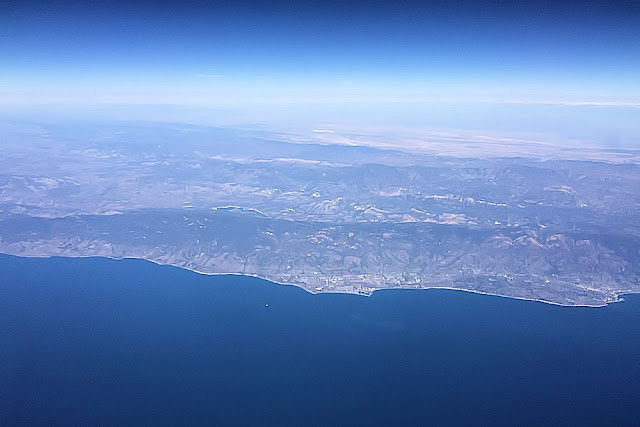 4.57 p.m. central time and we have about an hour and a half to go.  Our plane was over an hour late leaving Houston due to mechanical work on the engine.  I shall be glad when the journey is over and we are landing in Honolulu.

6.30 p.m. we landed at Honolulu Airport.  While on the plane videoing our descent, I had this very sweet conversation with the little girl behind me whose name was Grace. What a pretty name.  Grace told me she was staying with her grandma and grandpa for a while.  I told her they must be very excited.

This was the first time Grace had talked to me, by touching and tapping my arm around the edge of the seat on the window side. “Do you know what” she said “my ears hurt.  Do your ears hurt?”  We heard her ask her grandmother earlier, “Does everybody’s ears hurt?” as her grandmother said it happened to everyone when landing the plane.  Grace was just checking for confirmation I guess.  I said mine did a little bit but not to worry, she would be fine and the pain would go away very soon. Her grandmother thanked us for being tolerant.  I felt Grace's presence all through the flight and heard her ask her grandmother many questions. She gave several hefty whacks in the back of my seat, good strong kicks for a four year old - smiling here - and was a veritable chatterbox. Gregg and I assured her grandmother as they were leaving that we had enjoyed Grace and wished them a very happy time together.  For a little girl she had some very smart questions for her grandma, and made us smile all throughout.

There were many people on the plane who were getting a connecting flight to Guam.  We didn't envy them another seven hours in the air.

We picked up the rental car and drove to our hotel.  We are on the 12th floor.  Not long after we had that welcome shower and, as tired as we were, we walked down towards the ocean, stopping at one of the snack places half-way down from the hotel to the beach. 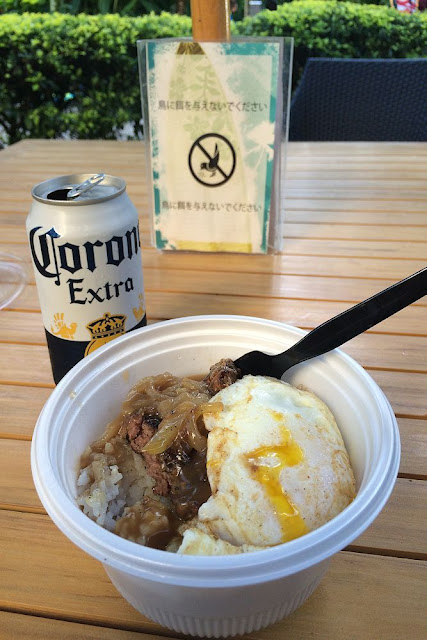 We ordered a loco moco. Our meal was a bowl of rice, topped with a beef burger, grilled onions and brown gravy, crowned by a fried egg with a soft yolk, and a can of beer which went well with our meal. 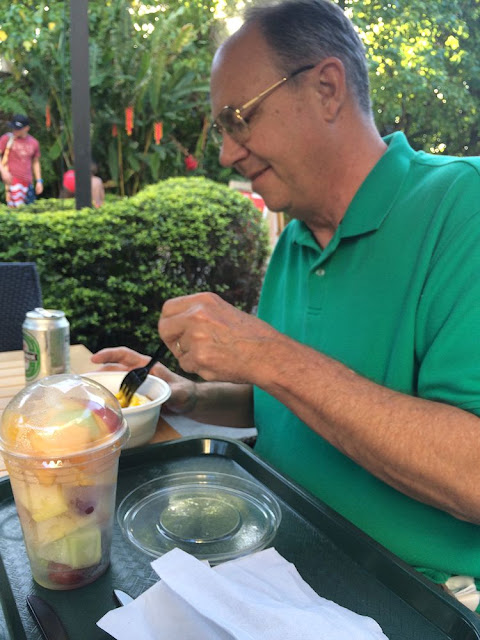 I also picked up a container of fruit which we shared.  And here's a close-up of that sign that is telling us not to feed the birds.  White doves and sparrows were walking around our feet.  People may not be feeding them but enough crumbs are dropped that it makes their efforts pay off. 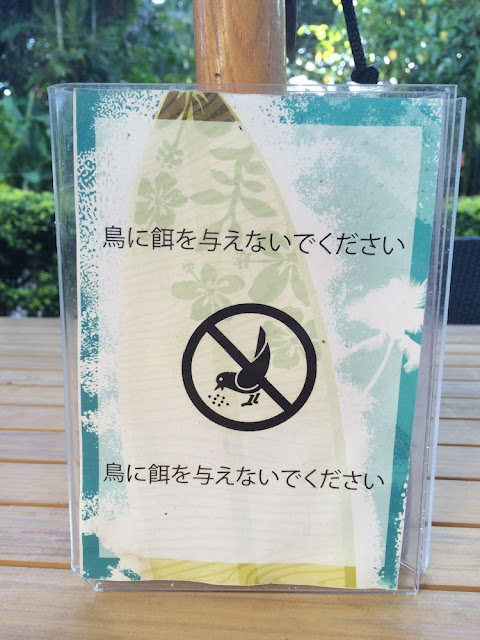 Walking down to the beach we pass many beautiful plants and flowers. 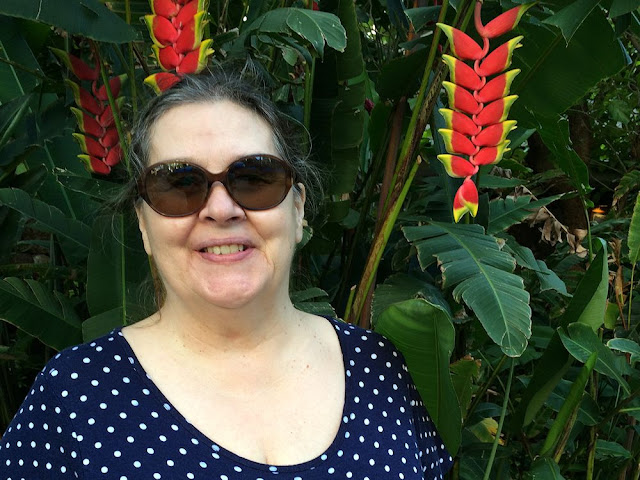 We enjoyed our walk on the beach, waded in the Pacific and looked towards Diamond Head. It was gorgeous!  Gregg said should we climb to the top again and yes he was joking?  I laughed and said not this day. We did that two trips back, about 12 years ago. It was such a fun hike, very strenuous with many people asking as we came down, how far did they have to go.  We had wondered the same going up.  It was great to be on Waikiki again.  The hill you can see in the distance, covered partly by palm trees is Diamond Head.  I'll have better shots of it later. 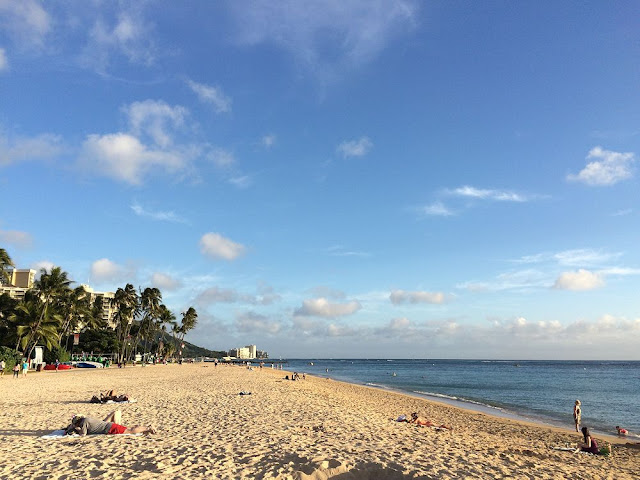 We came across a new friend. He has hundreds of acquaintances all over the island.  These cattle egrets can be found everywhere. 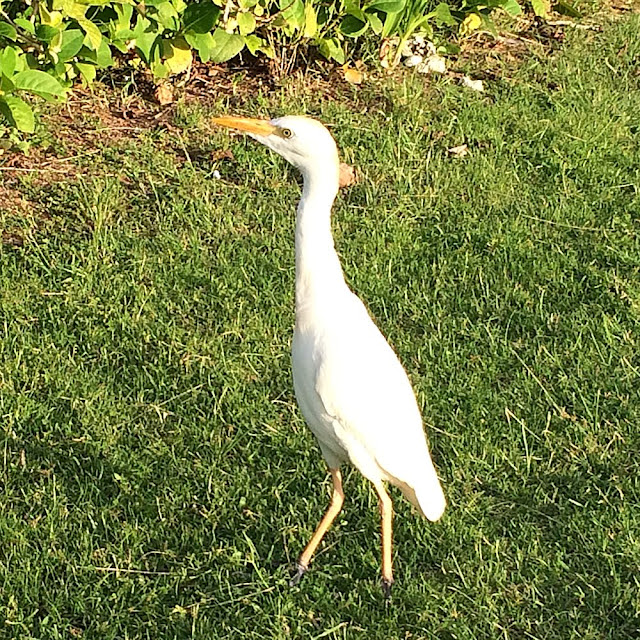 On our way back we stopped at the Barefoot Bar. Yes it was still there.  Gregg had a Mai-Tai and I had a Pina Colada. My first ever Mai Tai years before was not to my taste but I found when I took a couple of sips of Gregg's drink I enjoyed it and the next time we stopped by that’s what I had. 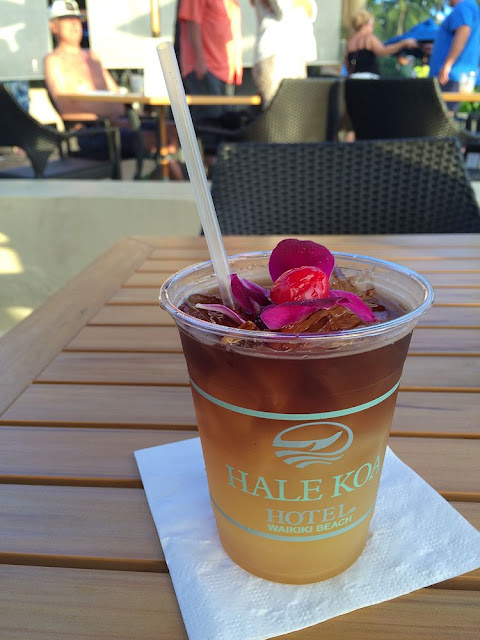 We stayed long enough while sipping our drinks to see our first sun go down on Waikiki Beach.  As if by magic all the activity stopped as everyone looked towards the setting sun. 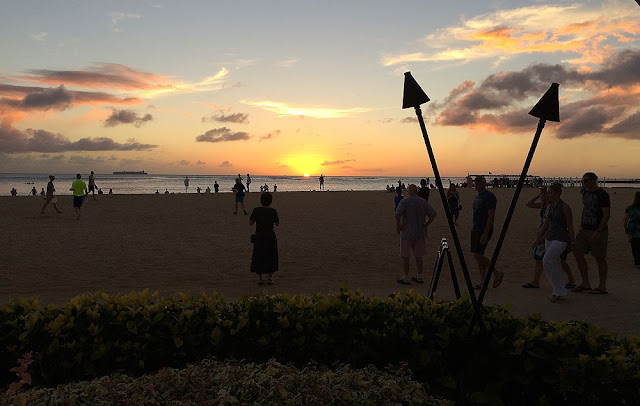 Gus, the banyan tree at our hotel, is all decked out for the holidays. 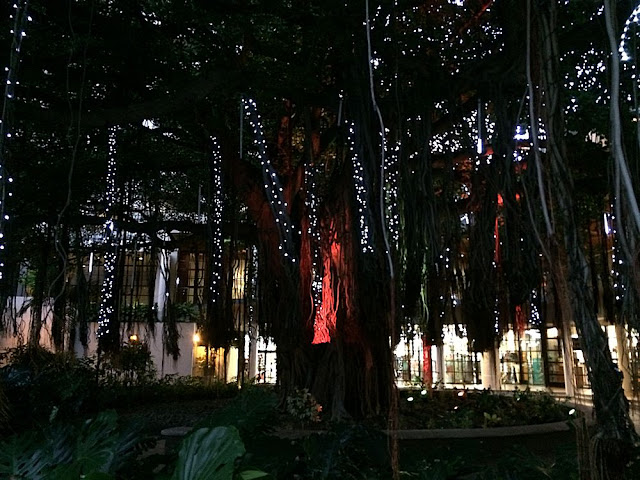 I could find no other information on Gus other than that he was decades old.  There is a narrow wall surrounding him where you can sit for a spell, and bathe in the glow of those pretty lights. 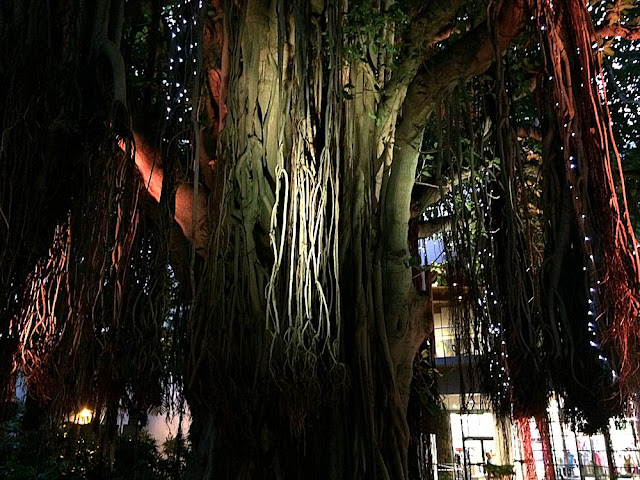 When we got back to our room it was only 6.30 pm but we were both exhausted. We are five hours behind east coast time and it would have been 11.30 pm at home. Also we both only got a couple of hours sleep in the last 24 hours.  We showered and climbed into bed and it wasn't long after that we fell asleep.  With the time difference we intend to see some wonderful sunrises.

And so ends our first day back in Hawaii.

Posted by DeniseinVA at 3:00 AM