I am resharing my photos from November 2011.  I attended a raptor demonstration given by The Raptor Conservancy of Virginia.  My other post can be found here if you haven't seen it already.  I will be sharing a few more next week. 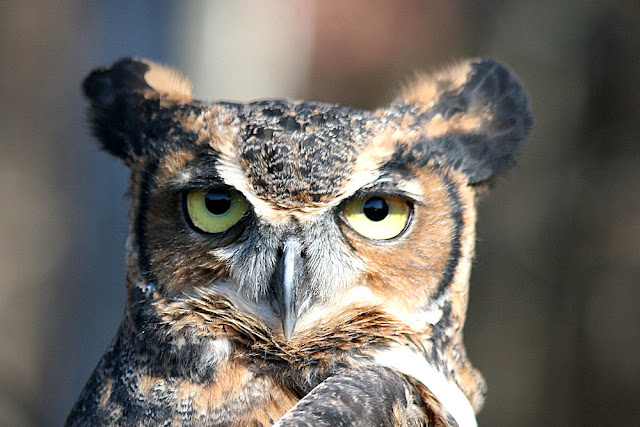 We were introduced to a selection of raptors, one of them being the Great Horned Owl. 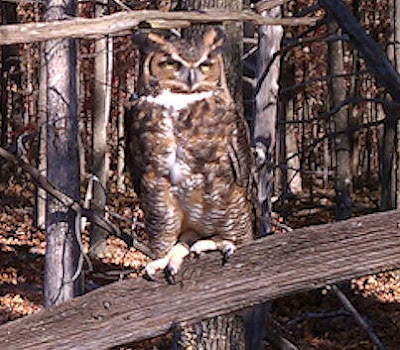 I gathered more information on this one.  The Great Horned Owl (Bubo virginianus) is the most common owl in North and South America, and has adapted to a wide variety of habitats and climates. It has an average life span of 5 to 15 years in the wild but can live anywhere from fifteen to twenty-five years in captivity. His body is 18 to 25 inches (46 to 63 cm) and his wingspan is 3.3 to 4.8 feet (1 to 1.5 cm). His weight is 2 to 5.5 lbs. (1 to 2.5 kg). The male is smaller than the female and has a much lower-pitched call. 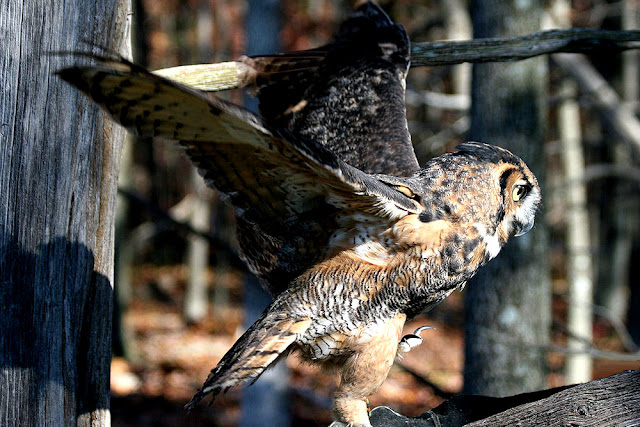 Its range is large because it can be found in Central and South America, from Arctic tree regions in the north, to the Straits of Magellan in the south.  It lives in woodlands, along cliffs and canyons, and in forests. 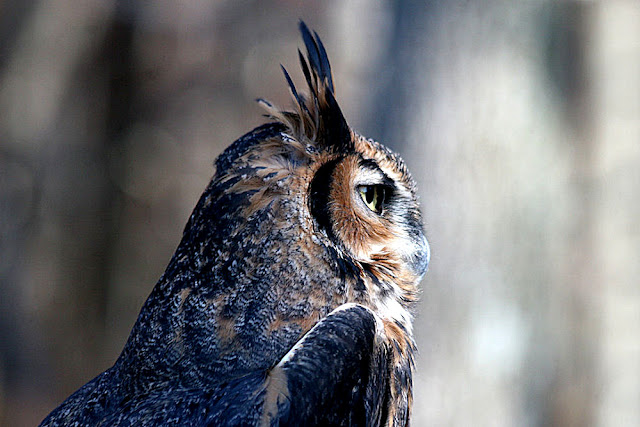 Its coloring is great camouflage as it has brown, white, gray and black markings that look like the bark of a tree. 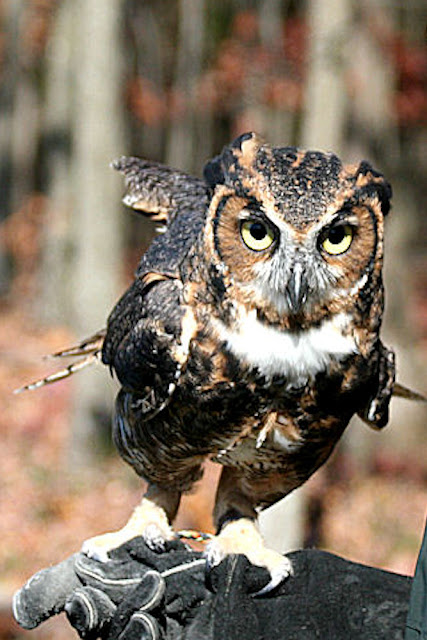 Another way of recognizing the Great Horned Owl?  It has a white patch on its throat.

As you might already know, owls have very good eyesight and excellent hearing that help it hunt at night. Its loosely packed feathers make it almost silent when flying. This makes it easier to sneak up on its prey. They also only see in black and white, but their eyes are as large as humans and are 35 times more sensitive. They cannot move them up and down like we can, so they have developed the ability to rotate their heads approximately 270 degrees. They have 14 neck bones whereas humans have 7. 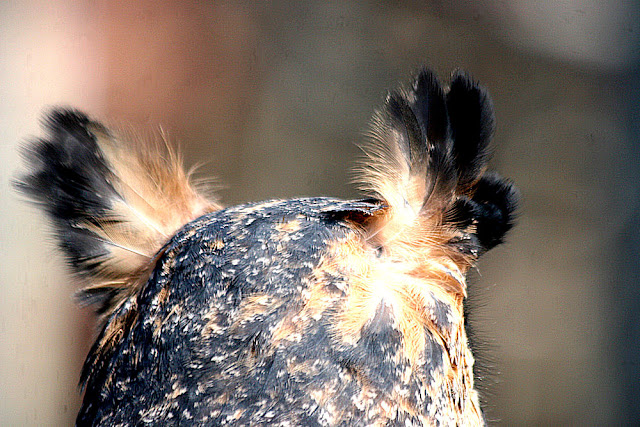 Adults have large tufts on their heads. These are called "plumicorns" and resemble horns to some and catlike ears to others. Those tufts of feathers that stick up like ears aren't ears at all. No one really knows what they are for. An owl's ears are actually on the side of its head. When an owl is hunting and hears an animal, the sound of it is louder in one ear than in the other. This tells the owl that the animal is closer on that side. The owl turns its head until the sound is equally loud in both ears, then it knows it is facing the animal. They do not have a good sense of smell but their hearing is so acute that they can hear sounds 10 miles away. 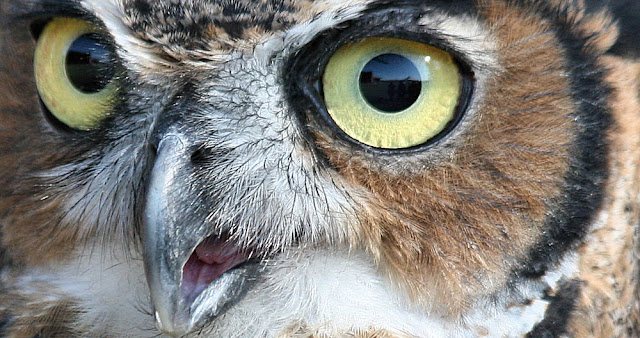 The stiff feathers around the eyes act a lot like dish antennas. They reflect sound toward the ear openings. 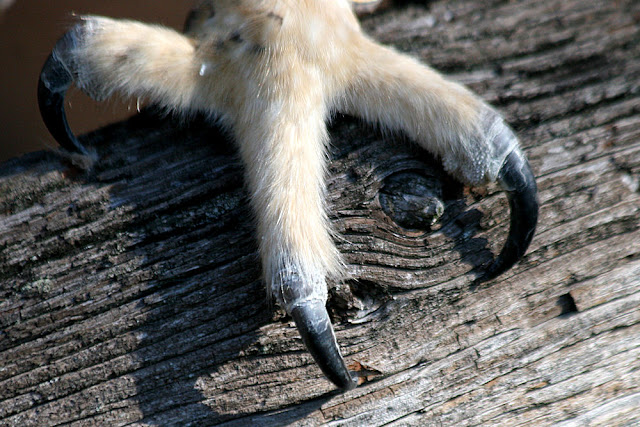 The structure of an owl's foot is referred to as zygodactyl. This means that two of the toes face forward, while two face backwards. This enables the owls to capture and grasp prey with greater ease. Sometimes the third toe can be rotated forward into a position occasionally used for perching. Of all the owls, the Great Horned Owl has the strongest talons. About 30 pounds (13,000 grams) of force is required to release the owl's grip on an object. 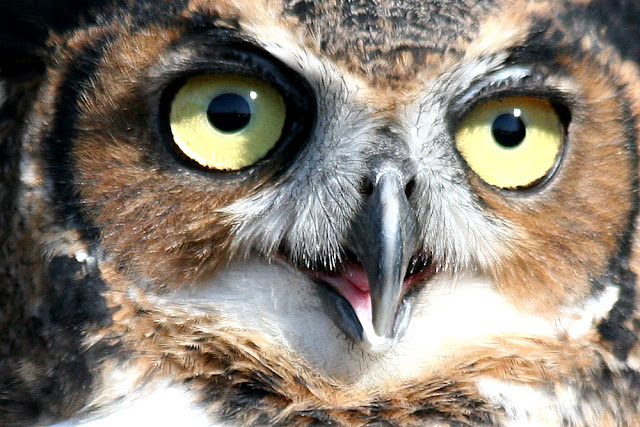 The Great Horned Owl is nocturnal and hunts for small mammals like, mice, rabbits, squirrels and skunks. It also eats birds like ducks and quail. We were also told they have even been known to make off with cats if the opportunity presents itself. It can eat small prey whole but larger prey it will tear into pieces that it can swallow. It cannot digest hair, bone or feathers, so nature fixes that. It regurgitates the undigested parts in owl pellets. You can often tell what an owl has eaten by looking at these pellets.  (This might be a bit too much information for some, but I found all the information about this bird fascinating, and I wanted to read for future reference.  One of the reasons I enjoy going back on old photos, so that I can have a refresher course on certain things I might have forgotten.) 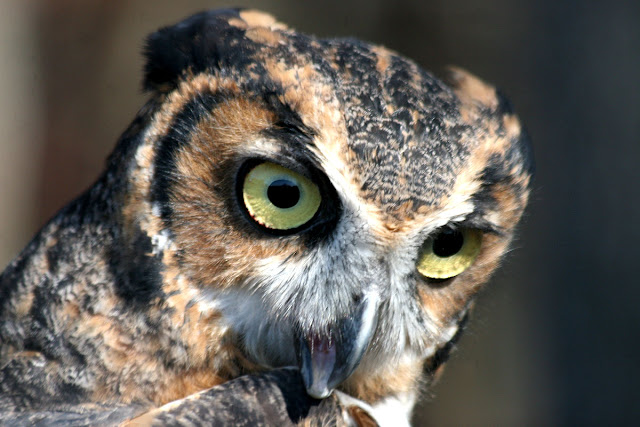 In January and early February it is mating time for the Great Horned Owl. The male and female call to each other during courtship and also bob up and down and puff up to attract a mate. They use abandoned nests of other birds, usually hawks or crows. The female lays two to three eggs. She will raise one family each year. Both the male and female incubate the eggs and provide food for the owlets. 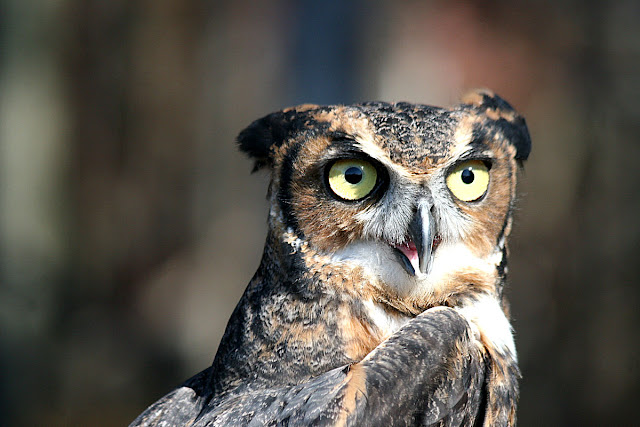 It is a very hardy species and can not only survive temperatures close to forty below zero, but it can sit in that frigid air while incubating those eggs, keeping them at a toasty 99 degrees F. (37 degrees C). A healthy bird's body temperature fluctuates more than a human's would, but a Great Horned Owl's body temperature in Minnesota during February, has been recorded from 100 degrees F (37.5 C) to 105 degrees F (40.4 degrees C). The owl's abundant, thick body feathers allow her to share her warmth with the eggs while keeping the frigid outside air out. Of course, her body is warming the eggs from above. 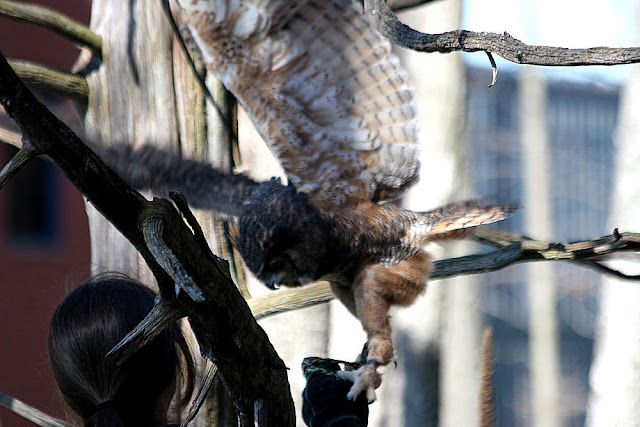 Would you like to know how it got its name? The scientific name comes from the Latin word 'bubo', which refers to an owl, and the Latinized name is for the state of Virginia, where the first specimen was taken for scientific collection. The common name refers to the large size of the bird and the feather tufts on its head. 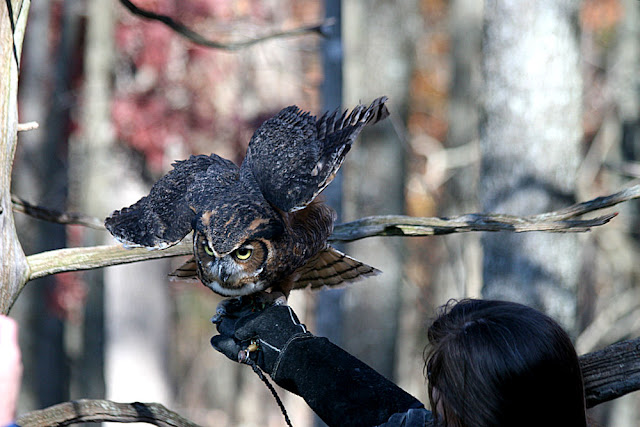 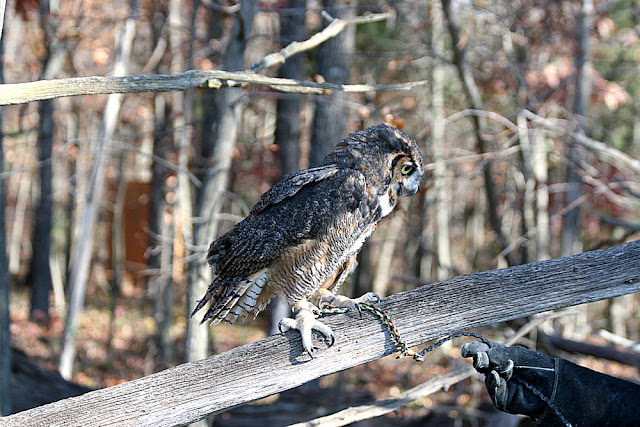 The Great Horned Owl can hoot, bark, chuckle, growl, hiss, screech, scream and clack its beak. And did you know a group of owls is called a parliament, bazaar, wisdom or study? 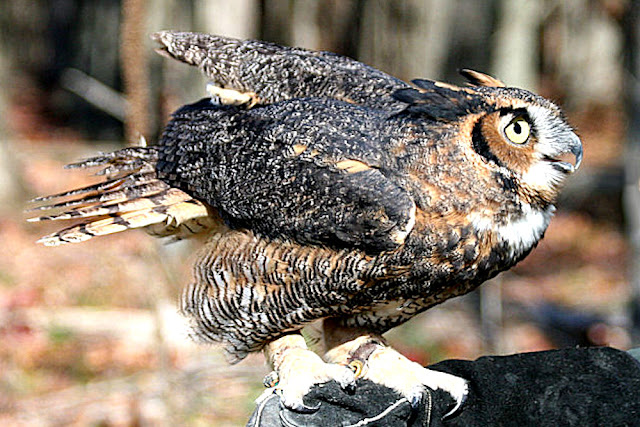 If crows, jays, magpies and songbirds find an owl roosting in their neighborhood, they will harass or 'mob' the owl until the owl finally decided to leave. This is undoubtedly because unwary crows or songbirds are likely to wind up as one of their snacks. 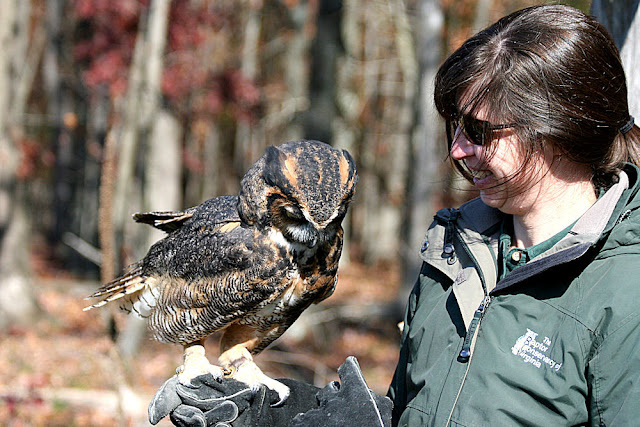 I have enjoyed learning about the Great Horned Owl. I am very grateful to The Raptor Conservancy of Virginia, and am thankful that there are places like this with such dedicated people who take in injured birds, rehabilitate and release them back into the wild if they can, and look after them for the rest of their lives if they can't.  I would also like to thank them for such a great demonstration of all the amazing raptors I saw that day.  It is a wonderful memory.

Thank you for sharing that memory with me.  Stay safe out there and have a great weekend! 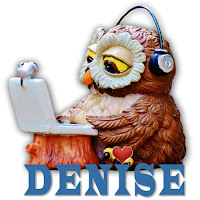 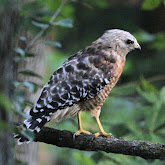