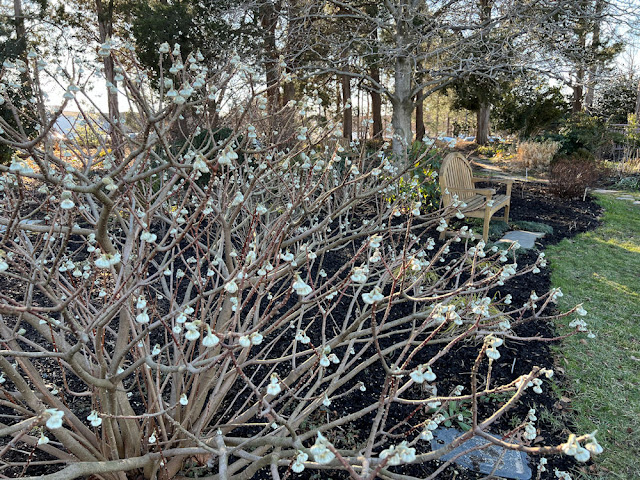 We drove over to the garden and arrived in the afternoon.  We were treating ourselves to a take-home meal from one of our local restaurants, and it didn't open until 4.00 p.m.  We had intended to come to the garden anyhow, and the idea of picking up dinner was a last-minute decision.  As soon as we got back to the car after a delightful walk, we called ahead and it was waiting for us when we reached the restaurant.  Not long after that we were sitting in the comfort of our own home, eating a nice hot dinner, as we talked about our visit to the garden. 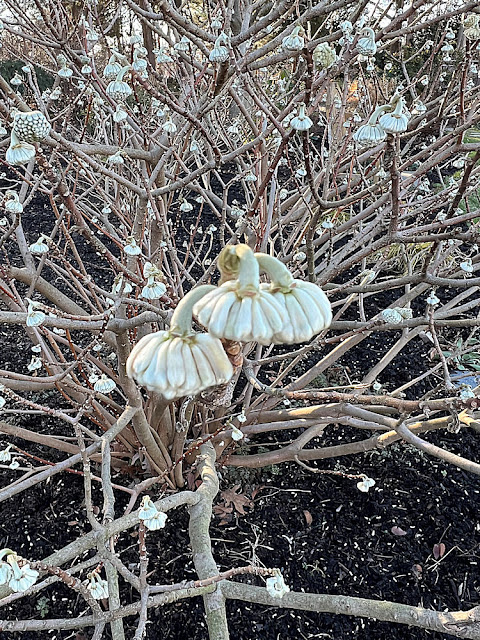 It was a pleasure to be back and we have missed coming.  We had a leisurely walk around the center green.  I will be sharing more photos, but right now I wanted to concentrate on this particular plant I spotted while walking along the path, not too far from the gazebo. 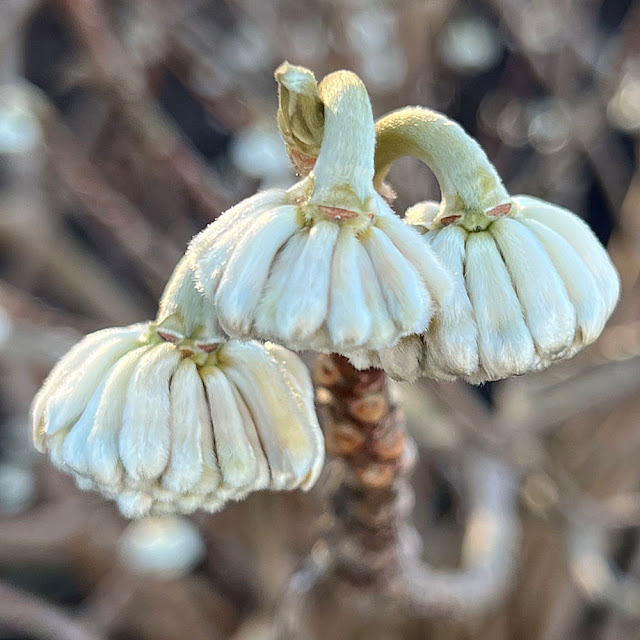 While taking photos I was approached by a lady and we started chatting about the plant.  She was very knowledgeable.  I thanked her and said how nice it was to learn about something I had never come across before, totally new to me.  I should say it had been there but I had always missed it, tucked into an area that I don’t always walk by.  It is also not right next to the path.  However, because of the time of year, I had not expected to see anything blooming.  This is why my curiosity was peaked when I saw what I thought were flowers. 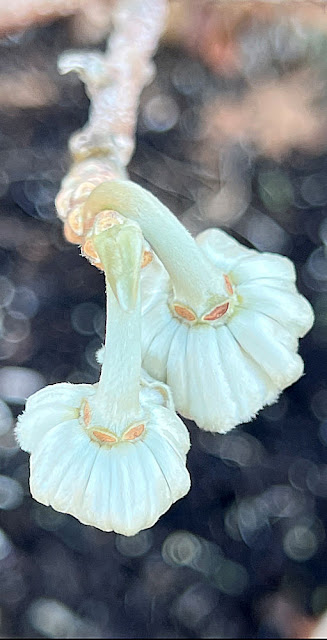 She asked if we were enjoying ourselves and I said yes, that we had been coming to the garden for years and that we loved it in all seasons.  Smiling, she told me that was great to hear as she was the manager of the garden.  She also told me that she had originally planted what we were looking at.  I don't think she realized how delighted I was to hear that.  I love these connections and to meet the person who actually put this beautiful plant into the soil was a definite plus, like meeting an artist who painted the art piece I have on my wall.  Our meeting also gave us the opportunity to thank her for all the hard work she and everyone who made the garden such a special place to visit all these years.  It truly is one of our favorite gardens, and we were very happy to pass that on. 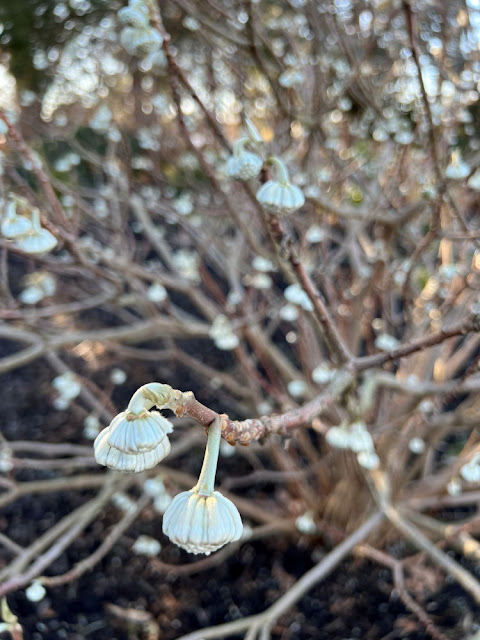 When she told us we had made her day, I was delighted we could do that.  It's always a pleasure to meet nice, friendly people.  She was a very sweet and friendly lady, and what you would want for a manager of any garden. 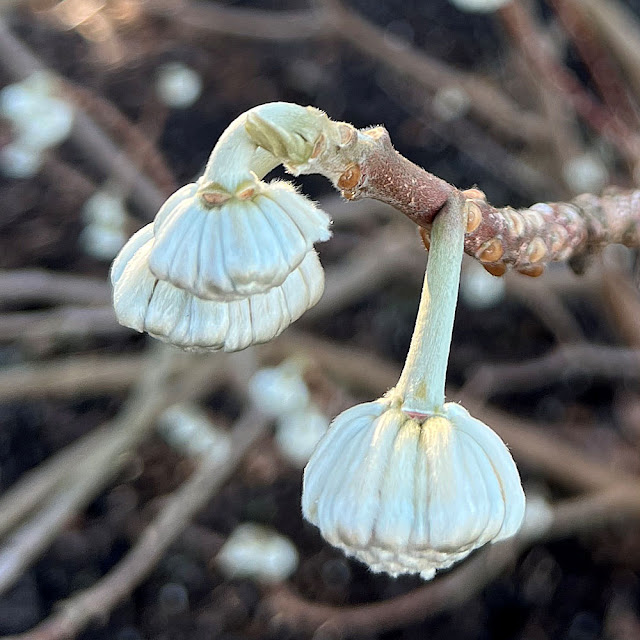 We were told its name, Edgeworthia chrysanthia.  I looked it up on my plant app later, and it is commonly called Paperbush.  I also learned that the genus is named after Michael Pakenham Edgeworth, a Victorian-era Irish botanist, and his sister, Maria Edgeworth.  Maria was a writer who penned many realist novels for both children and adults, making it appropriate that this paper-producing plant bears her name.  In addition to the links I found, which you can read if you click on their names, is this website.  There is also a photo of the plant when it is blooming.  The lives of this brother and sister are extremely interesting, another reason to thank the Manager of Green Spring Gardens, for taking the time to stop and tell us about it. I would never have known about them otherwise, and I certainly had an enjoyable time reading about them. 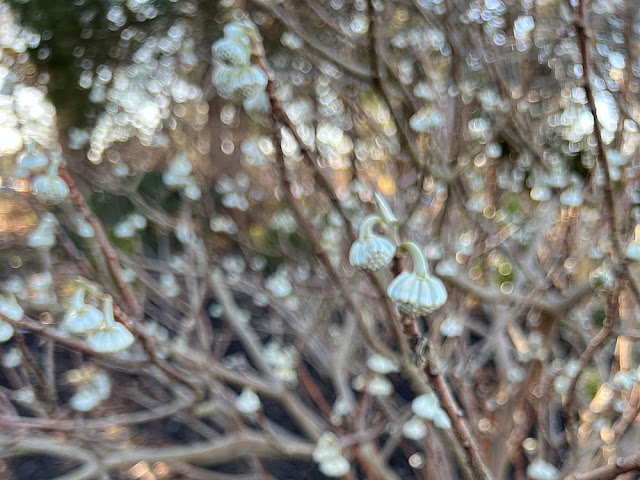 Also, the paperbush is used in Japan for the production of a wide range of functional and decorative papers known as washi.  Edgeworthia chrysantha is used to make delicate writing papers,  and also at one time for durable banknotes because of its long-lasting fibers.  The banknotes were later made with a cheaper alternative, so I read.

If you go to this link you will see more information and a photo.  It tells us that ‘it is a late-winter flowering shrub and continues to flower until early spring’.  If you scroll down to the bottom of the page and click on ‘photo credit’, it will take you to more photos.

And that's the story of this lovely plant.  Meeting the manager of the garden who was so very nice, being introduced to a new plant and finding the interesting story behind its name, added to the enjoyment of our visit.

There were Snowdrops not far away, and trees were budding.  I will share those photos in my next post.

Thanks for looking and as always, I hope your day is a great one. 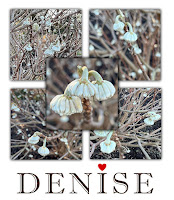