The day of the snowstorm (1-4-22), I went outside to take a few night shots.  By that time the sky was clear, and I wanted to photograph the trees with their mantle of snow.  I also wanted to experiment with the camera on a new phone I had been given for Christmas. 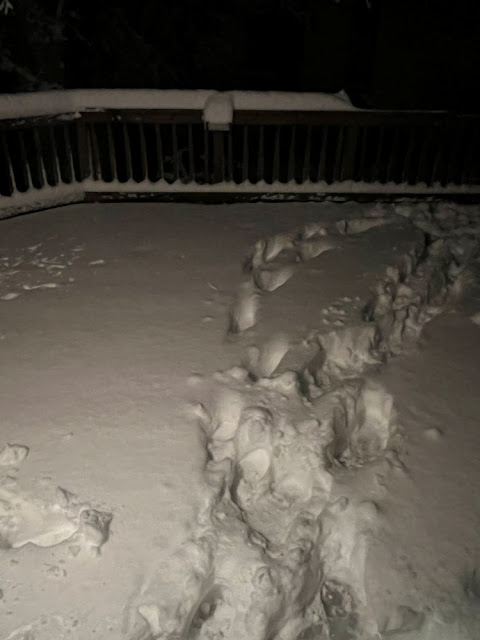 But first, I am sharing the above photo we laughingly call "bird patrol".  I wanted to put seed out, so that our feathered - and furry - friends would have something to eat in the early morning. 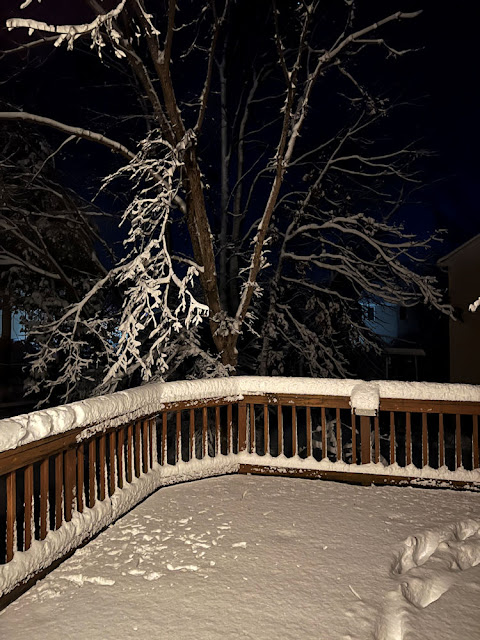 And then I turned my attention to the trees. 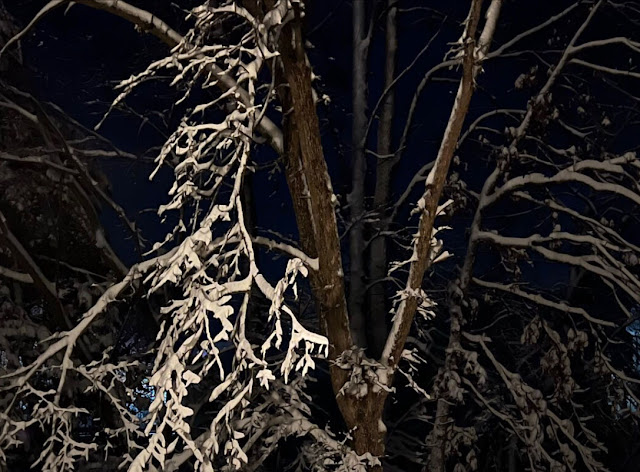 It was chilly and I didn't stay out too long.  That and the fact it was almost bedtime 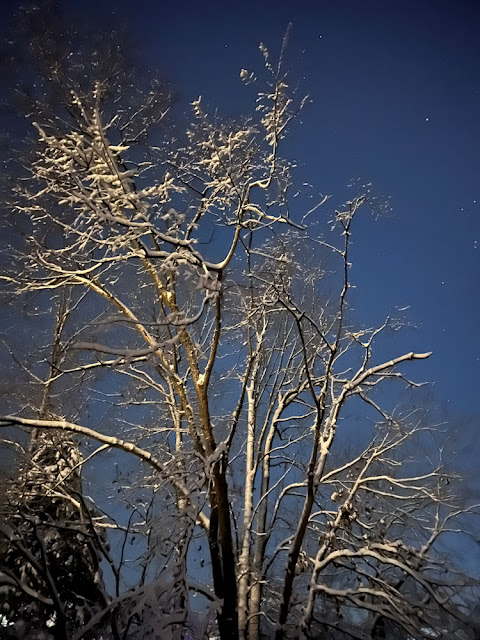 The night sky seemed even darker than usual, most likely after coming out of a lit house.  Later I was surprised how light the sky appeared in my photos.  I still liked them though and will learn about the settings on this camera feature as the days progress.   These next two photos are the same, but I tried darkening the second on Paint Shop Pro, to see if I liked it better. I am still not sure which one I prefer. 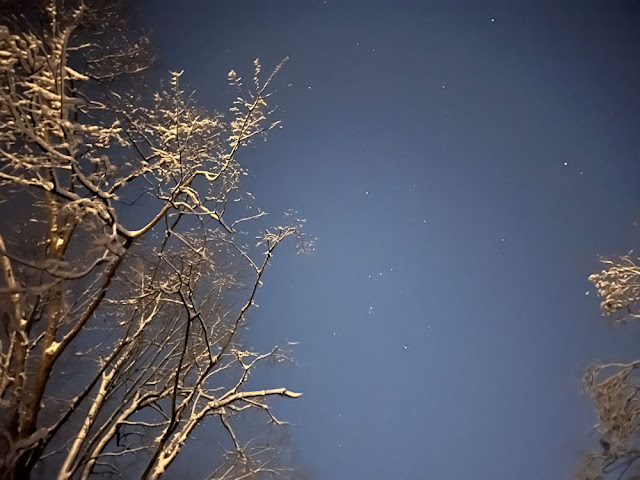 The most fun part of the evening for me was that I made a discovery when I looked at these two photos on my laptop.  I had enjoyed looking at the sky, at the same time noticing that there were still no planes flying in the direction of our nearest airport.  There had been many cancelled flights because of the storm.  Normally there would be several planes with their twinkling lights up there, but the lack of them allowed me to concentrate on something else, all those incredible stars.  When I went back inside and downloaded, not expecting anything but the trees, I was tickled pink to notice I could see Orion's Belt, and then I was able to pick out more of the constellation. 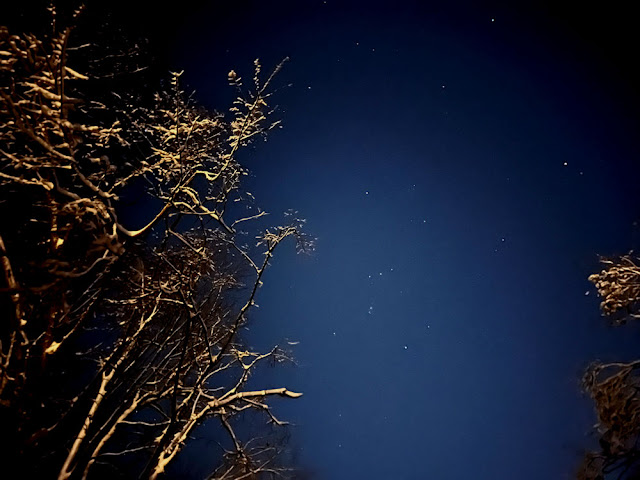 These last two photos I found online, and I have included a bit of information. 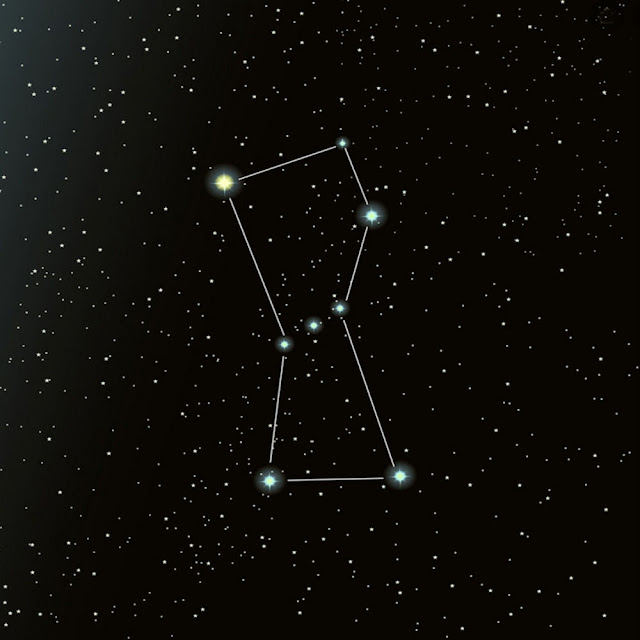 I read that Orion is located on the Celestial equator and can be seen throughout the world, clearly visible in the night sky from November to February.  The constellation is named after the hunter in Greek mythology and is one of the most obvious and recognizable constellations in the sky.  This is true because it was the first constellation I learned about years ago, and once I found the belt it was easy to pick out the other stars.  Orion is in the southwestern sky if you are in the Northern Hemisphere, or the northwestern sky if you are in the Southern Hemisphere. 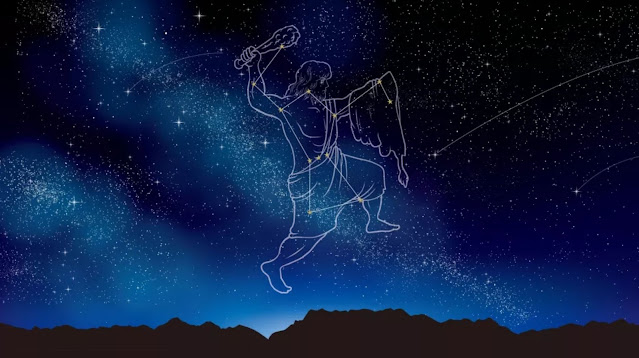 The following link, Orion's Belt, will take you to Wikipedia where there is a lot more information about this constellation.
You probably won't be surprised to know I have yet more snow photos. 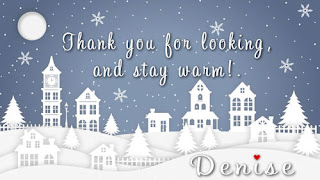