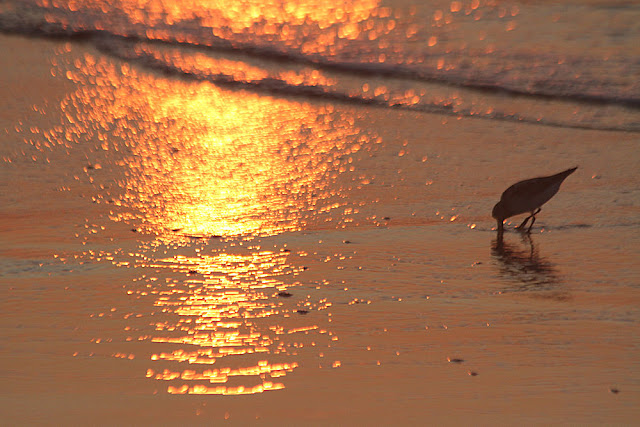 It is now 6.50 p.m. and I am back at the house.  I got up today for the sunrise. Gregg almost had to see it on his own as he left before me, with me mumbling some poor excuse about being too tired.  I mumble things incoherently when I am almost all-the-way asleep.  However, after he left I could not bear the thought of him seeing that sunrise on his own.  I heard the door close and I had immediate regret, so I kicked my lazy butt out of bed and dressed faster than I usually do, literally throwing clothes on, raced down to the beach without any thought of twisted ankles - I have a history - had momentary panic when I couldn't see him, but looked and looked and there he was. 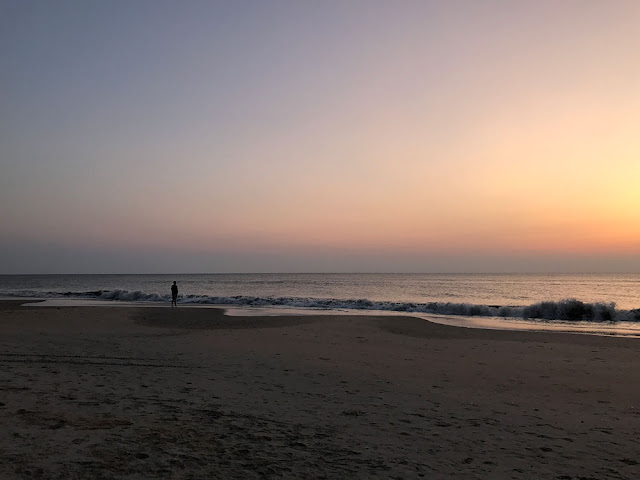 I snuck up behind him and gave him a big hug, experiencing a few seconds of thought that I might be hugging a complete stranger.  I have been known to rush up to someone - rarely thank the powers - pat them on the back, chatting away for what seems like an eternity,  thinking it was Gregg - that happened not so long ago - only to be greeted by a  strange face in complete shock at being accosted by, whomever he thought I was.  I don't blush too often but when I blush I am my own sunrise, and it was a wee bit dark that morning.  I needn't have worried.  Gregg saw me coming as he had a big smile on his face and he wasn't surprised.  He knows me better than I know myself at times.  A few minutes later here comes the sun.  Surreal! 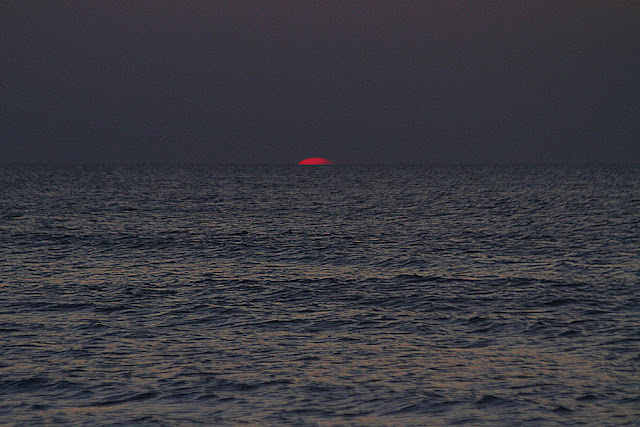 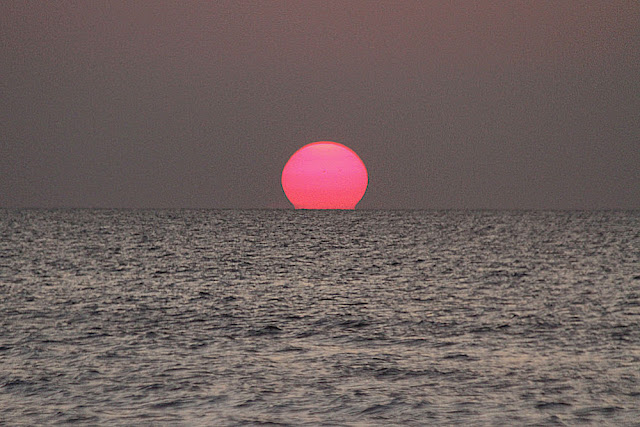 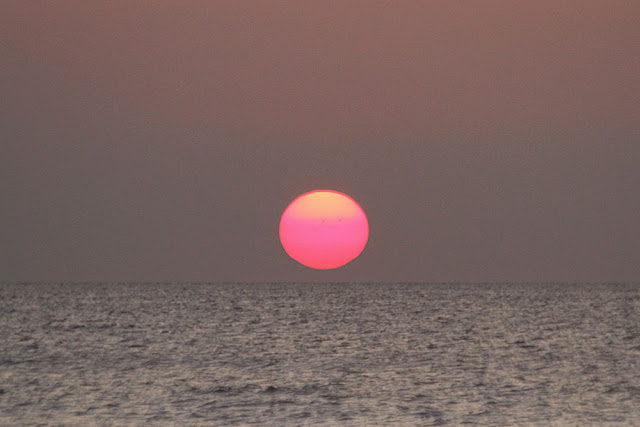 "Sunrise offered a very beautiful spectacle; the water was quite unruffled, but the motion communicated by the tides was so great that, although there was not a breath of air stirring, the sea heaved slowly with a grand and majestic motion." 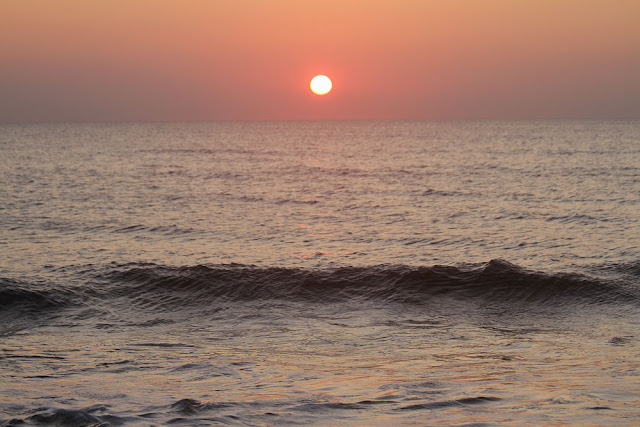 These are all Gregg's sunrise photos.  I have some of my own which I will share at a later date. 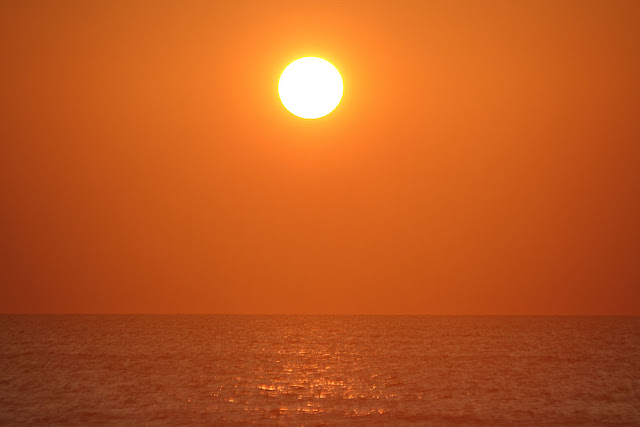 It was a lovely time at the beach in that very special light. There were a few other sun worshippers. 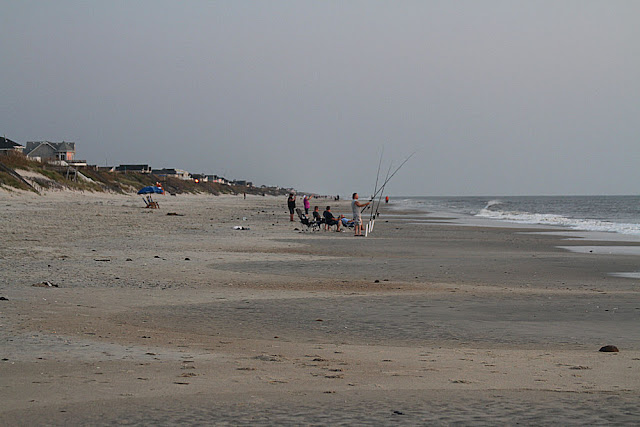 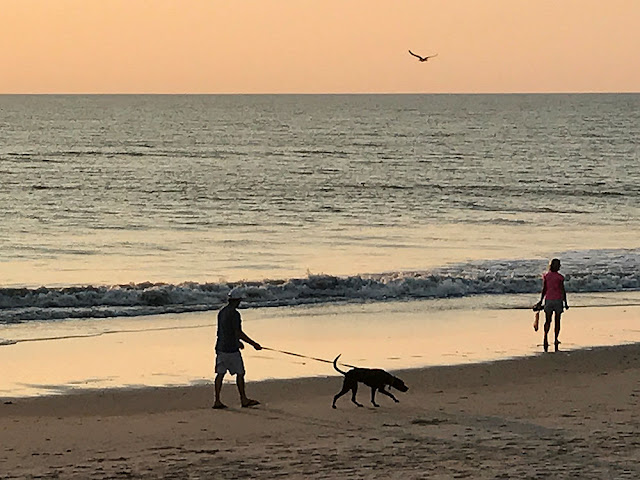 As it got lighter we could see a familiar figure approaching.  It was Gregg's sister. 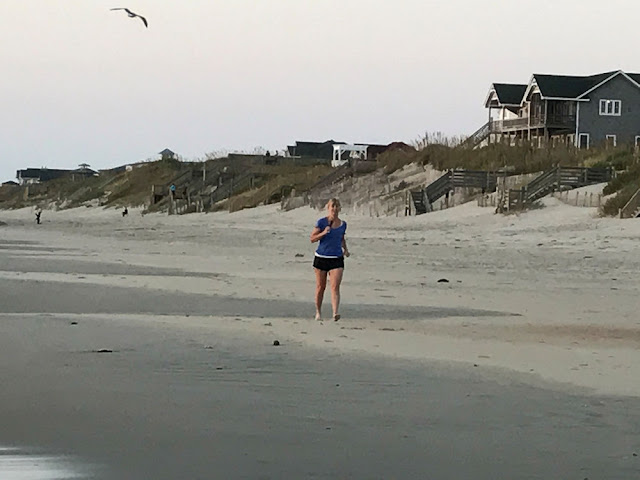 We had a nice time chatting for a while.... 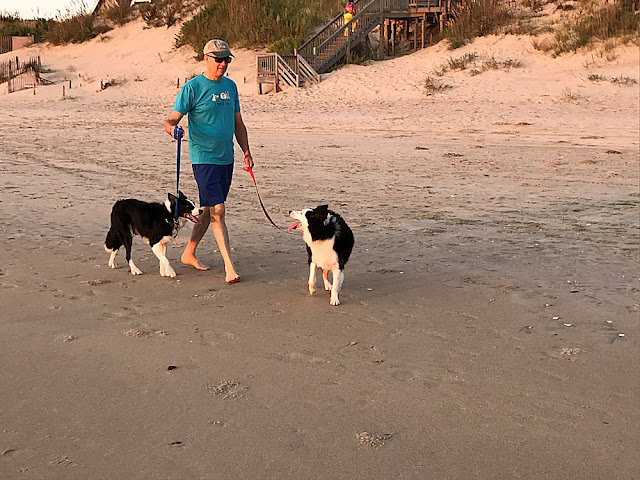 and watched as these two cute dogs trotted by.

They were certainly enjoying their walk. 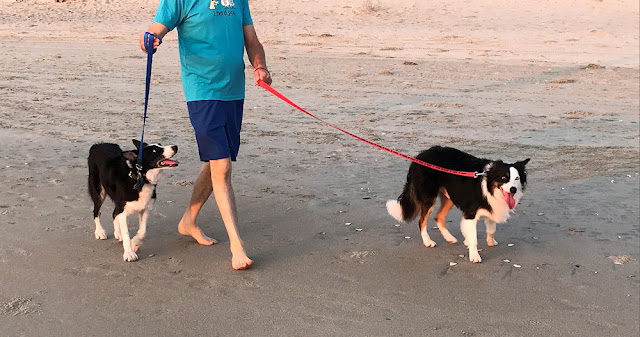 Gregg and his sister took a walk further up the beach and I meandered back to the house, taking lots of photos along the way, 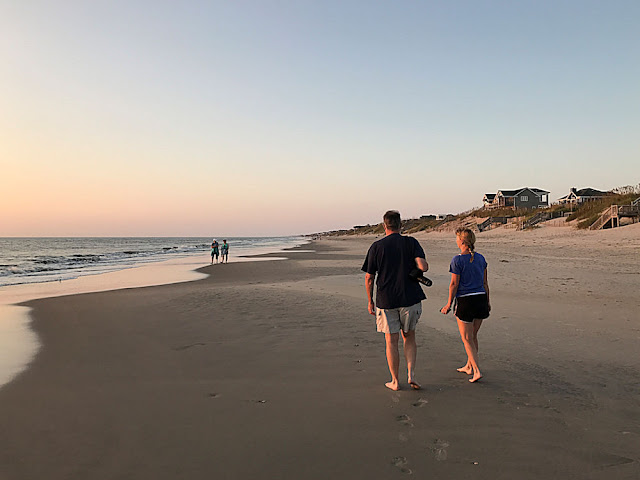 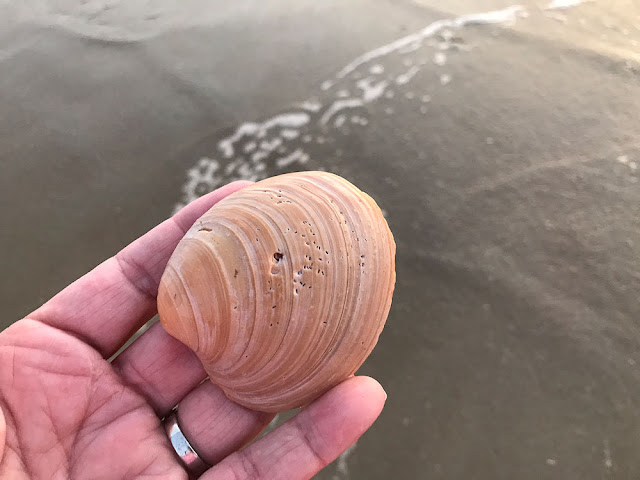 I thought this was some kind of seaweed and was very surprised to find that it was an egg casing for a skate.  I would like to spend more time at the beach to improve my knowledge of such things. 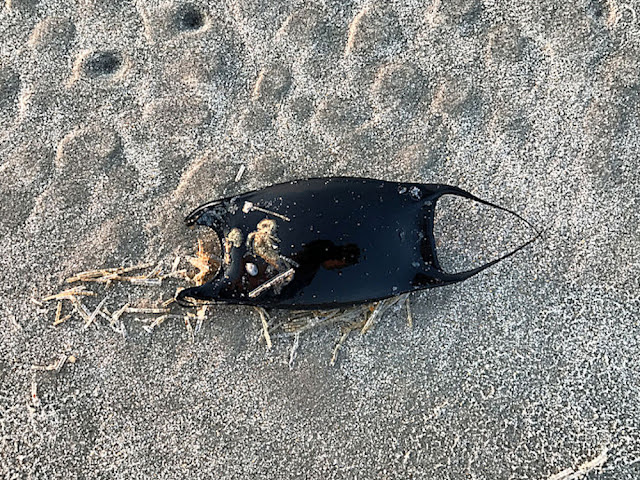 I came across the following here and here which gives more information. 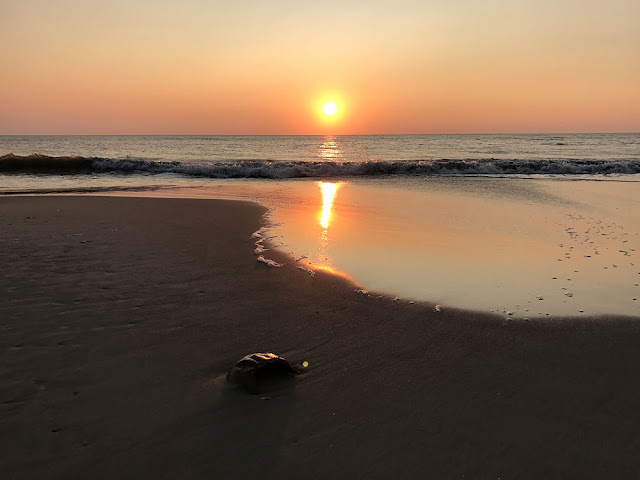 I came across the remains of a horseshoe crab earlier.  I look forward to the day when I can see a live one. 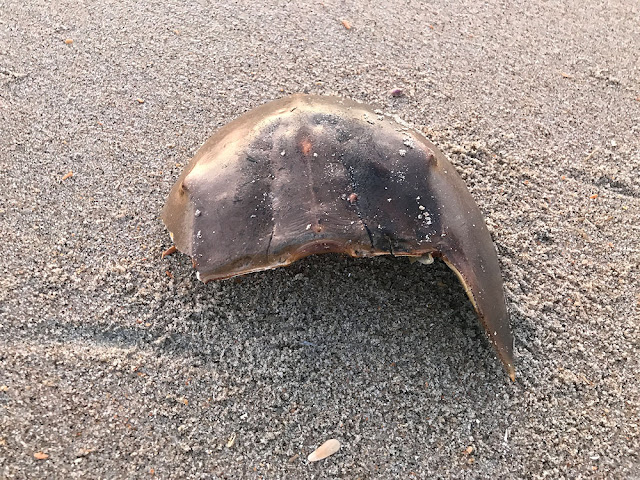 I see traces of those ghost crabs again... 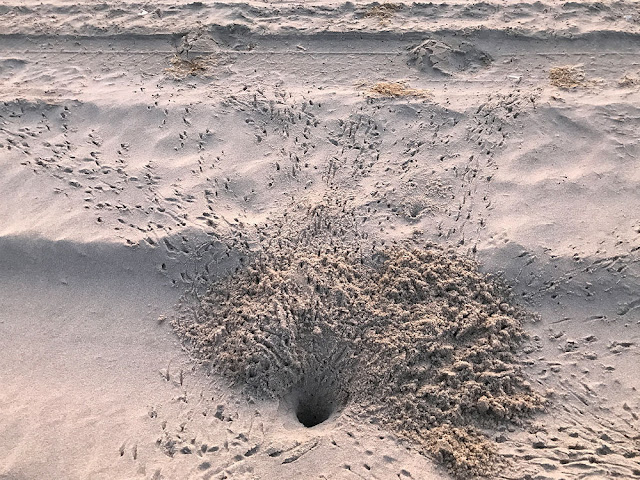 and occasionally see them scurrying down into burrows as I walk along the path back to the house. 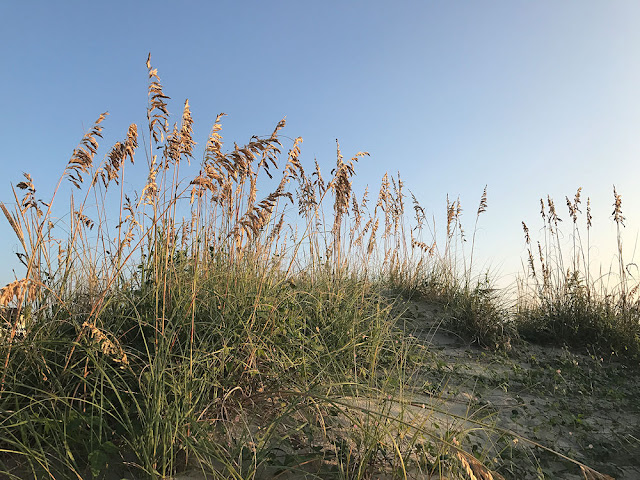 The dunes are high and you can't see the ocean when you reach the bottom level.  It is very private and incredibly pretty. 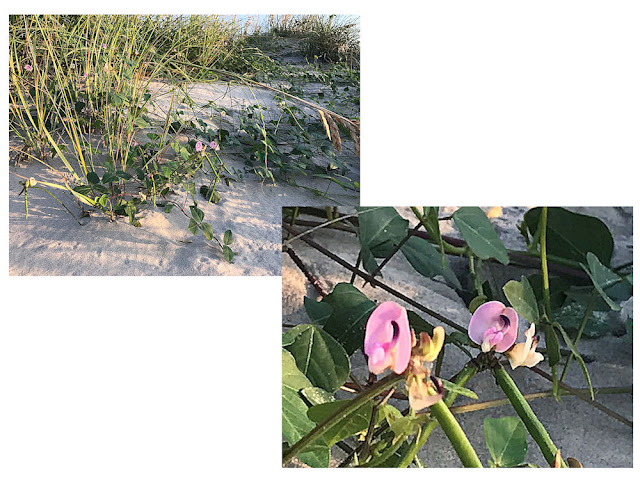 There is a row of sea oats on the top of the dunes, and I believe this pink flower, quite tiny, is a perennial sand bean.  These and the other fauna keep me well occupied.  I am not sure what the spiky plant is. 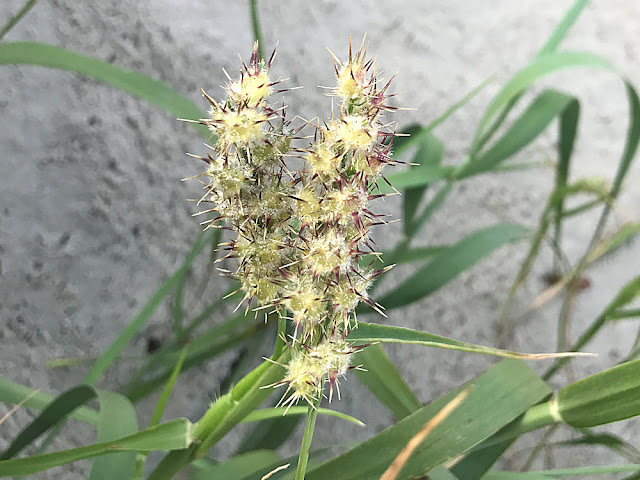 I believe these are pokeweed berries.  There is an interesting article at this link. 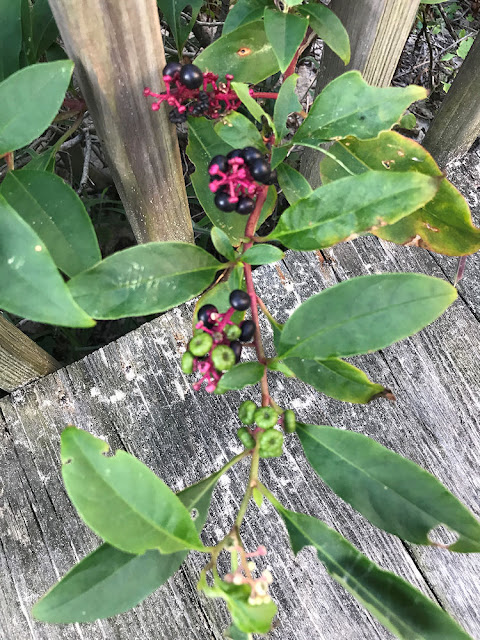 We have a private entrance and there is no one else to disturb my thoughts, and no one awake in the house yet.  Once I had finished searching for wildflowers and ghost crabs, I found a comfortable chair and sat outside for a while enjoying the peacefulness of it all, looking up at the dunes and the pretty glow that still filled the sky.  It was a perfect time of the day to do this.  I stayed there for a half hour or so, before going in and getting ready for another day of sight-seeing.

Posted by DeniseinVA at 8:12 PM