3.20 p.m. Gregg and I have just returned from the Curritcuck Lighthouse.  Fortunately we had no problem parking the car on a street nearby. 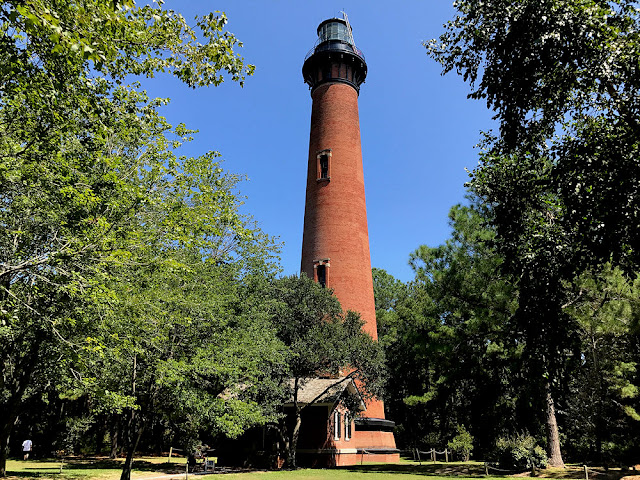 The lighthouse stands 162 feet from its base and you will climb 214 steps to reach the top, but apparently the views up there are phenomenal. 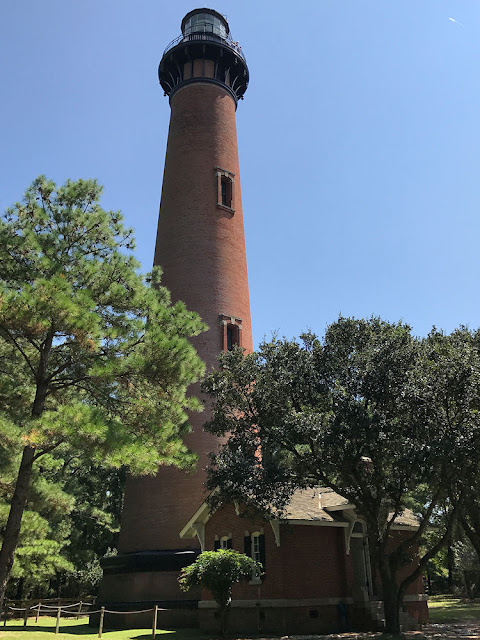 We could see people at the top but we were happy to stay on the ground and enjoy our surroundings. The last time I walked to the top of a lighthouse was in Bermuda 20 years ago.  I remember having jello legs at the top even back then, and knew that it would be my last climb.  I am not sure how I made it down.  So, I looked at the people waving above, waved back and wished them luck on their descent, silently.  They were young, need I say more?  I also quickly add that I truly admire people my age and older who can still climb to the top of these things, I'm just not one of them. 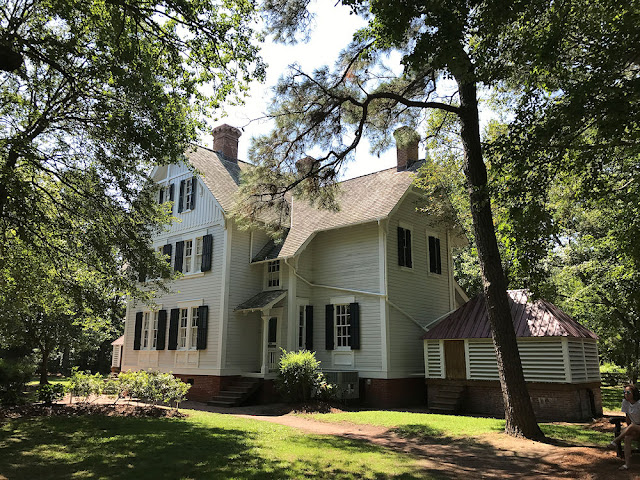 There were two pretty buildings nearby.  The keeper's house in the above photo was completed in 1876, and three keepers and their families shared the duplex.  When the lighthouse was automated in 1939 and the keepers were moved out, the house fell into ruin. Happily, restoration of the propery began in 1980 and today it looks like a house I would love to live in, as I would this house below. 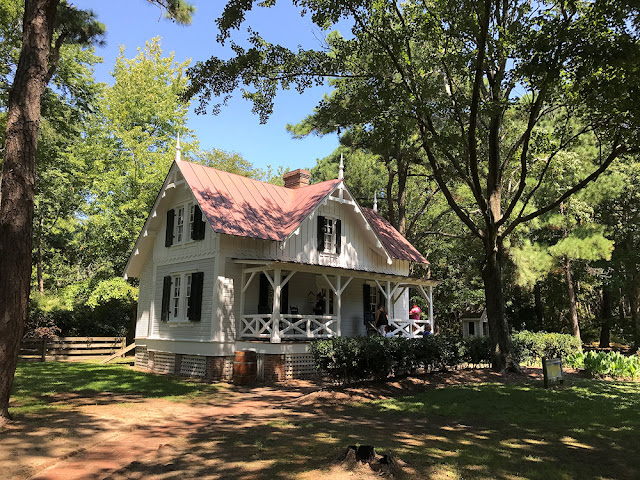 It is the keeper's smaller house which was built in the 1870's, moved here in 1920 from the Long Point Lighthouse Station on Currituck Sound.  It served as the principal residence for the keeper and his family until 1939.  There is a web page here that shows photos and history of the lighthouse and its houses.  Also this site has a lot of great info. 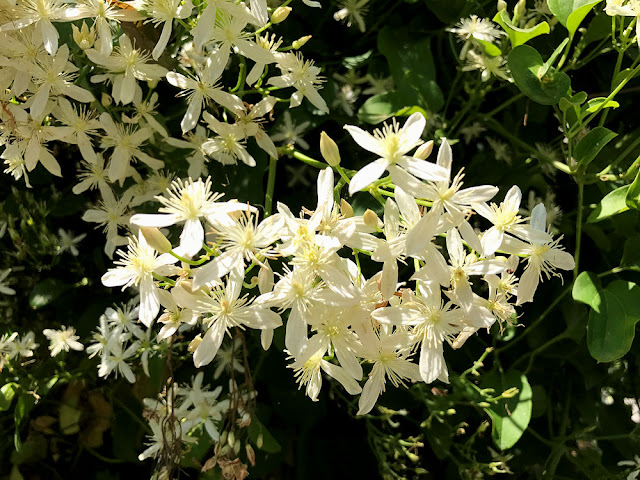 We walked up the street to an area where there were a few eateries, and we stopped for lunch. 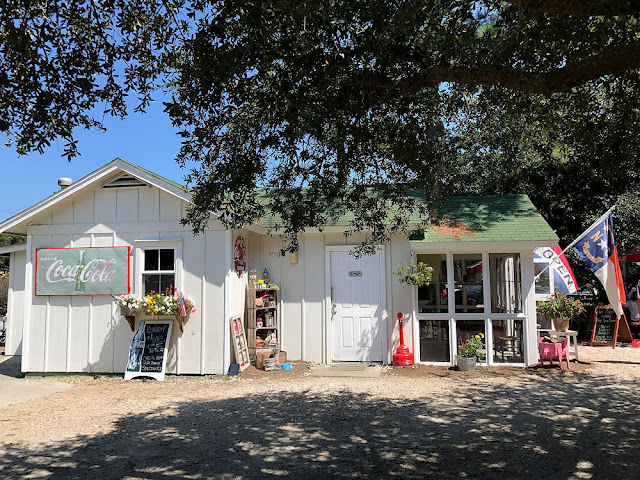 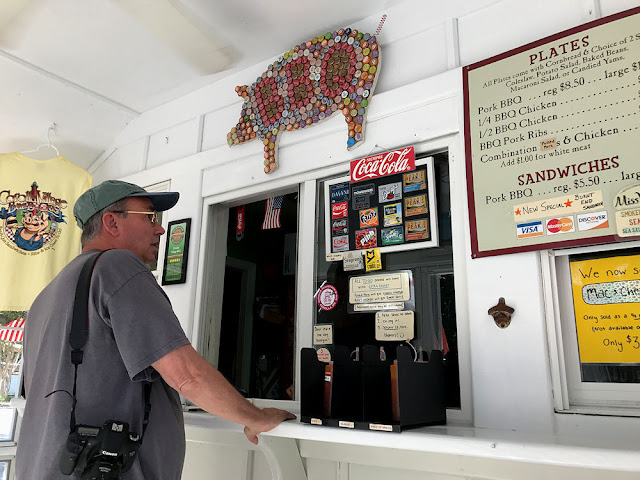 There were picnic tables outside, and we settled down to eat our meal.  No photos of the meal but I did take these. 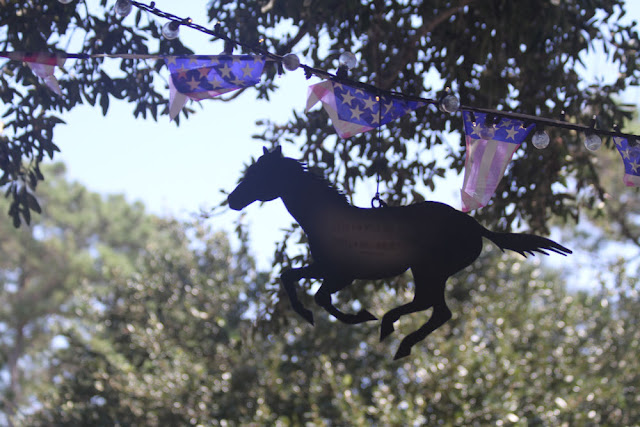 We are big fans of Colman's Mustard and it was fun to see a very large can used as a vase.  A novel idea.  Coleman's mustard was one of the things I missed when I first moved to the States.  It was very hard, nigh on impossible, to buy nostalgia foods.  Now it is being sold everywhere, as well as a lot of other British items.  You can find a whole international selection in many supermarkets. I am always stocking up on my two favorite teas,  Yorkshire Gold and P.G. Tips, and Colemans.

We are making our way back to the car but there are many distractions along the way.  We came across a playground. 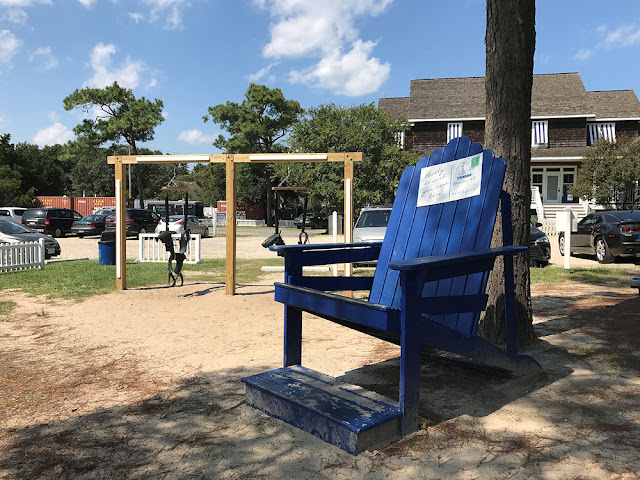 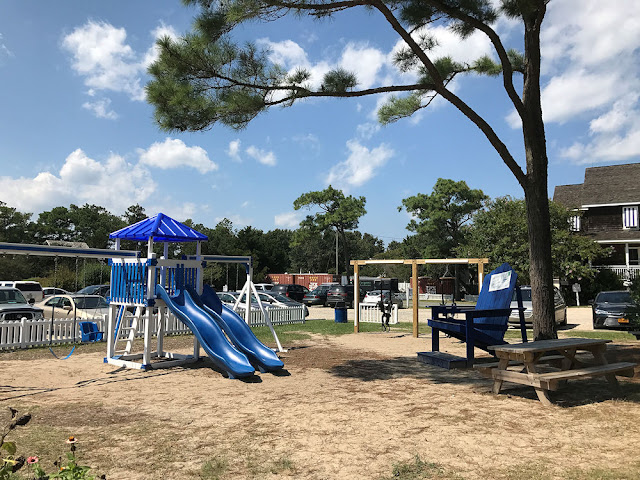 I headed straight for the chair! 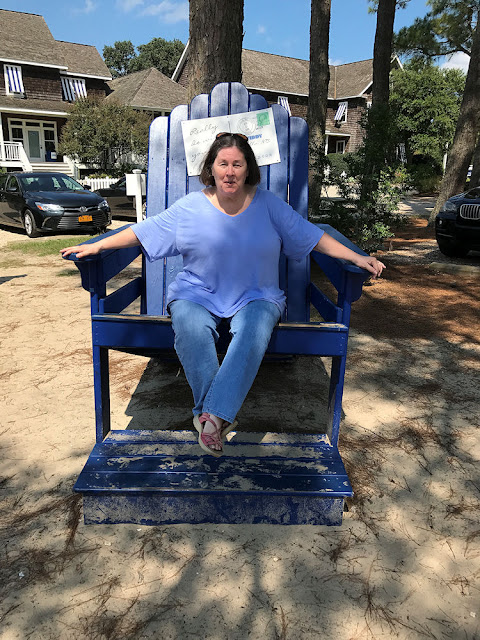 A very cute idea for little ones. 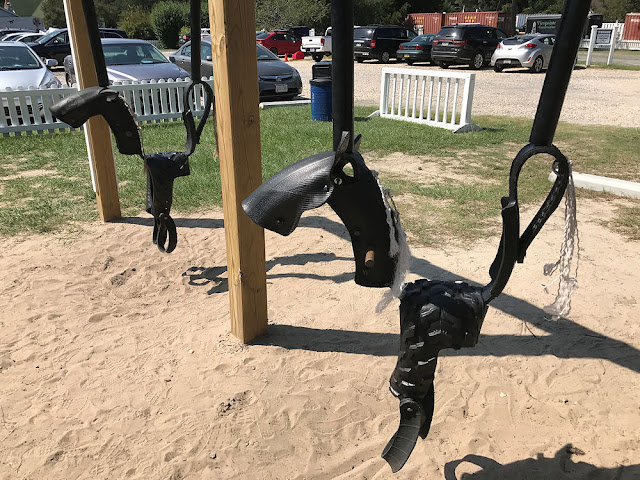 Leaving the park we came across our little friend I shared in a previous post.  There were air pumps next to the playground and his human was tending to his tires. 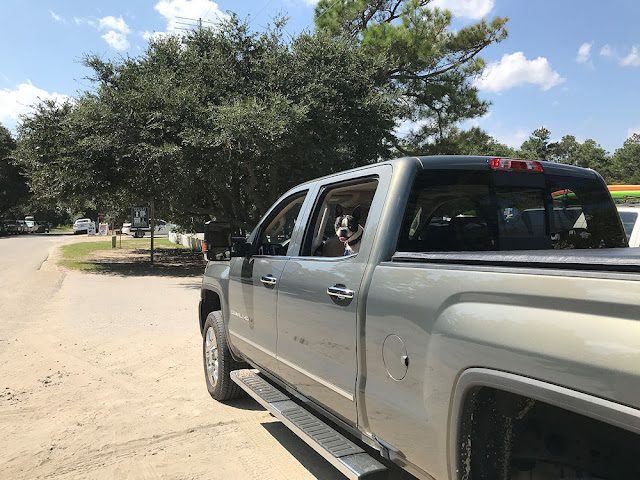 The cute little guy's body was actually wriggling furiously, most definitely inviting a fuss, but I didn't give into temptation this time.  He was, however, adorable. 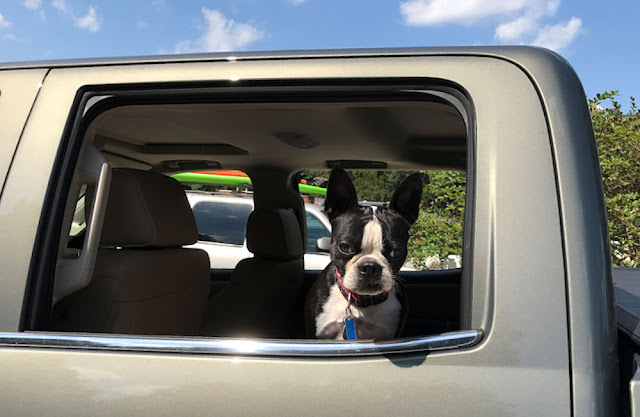 We came across the old school house, which was thought to be built between 1890 and 1905.  It was in session until 1958 when it was closed due to lack of students. 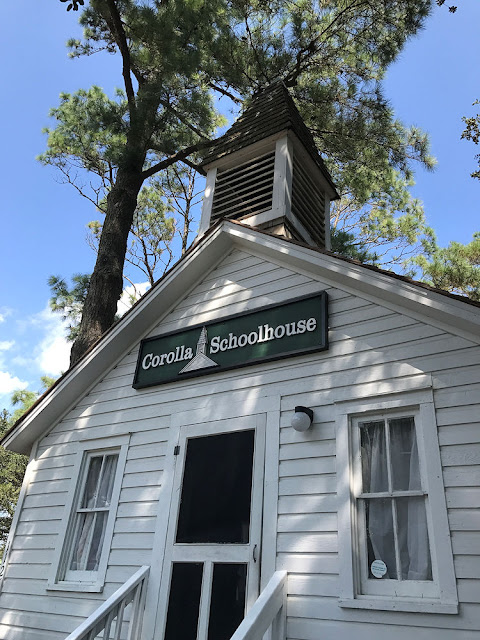 You can read about its history here. 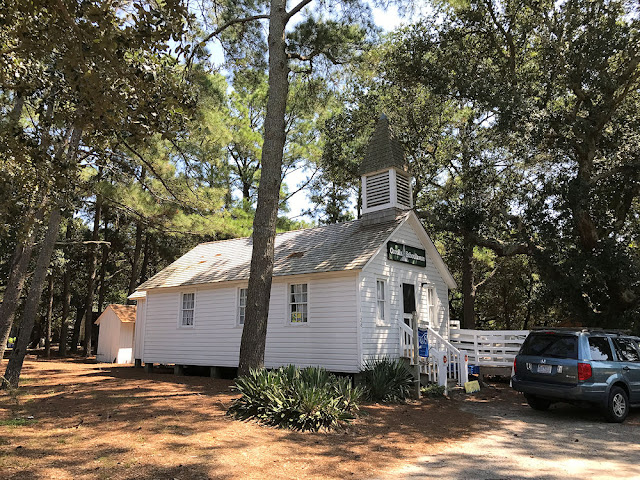 Look what Gregg found?  There are a lot of big chairs in this area. 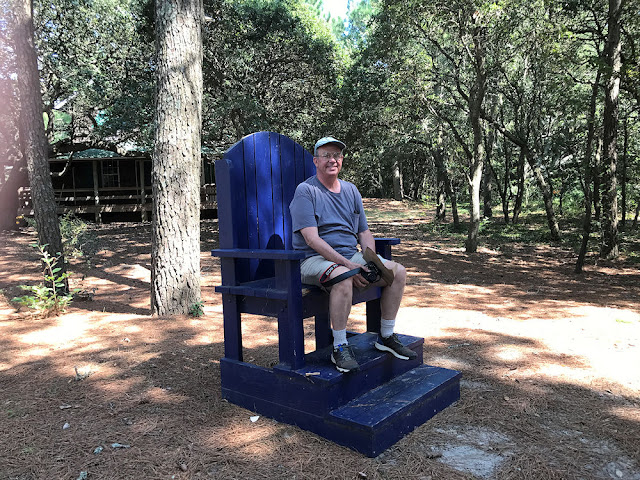 We were walking along one of the narrow roads back to our car, and we passed a few private residences.  In one particular area we startled dozens of frogs.  At our approach they jumped out of the grass into a long ditch filled with brackish water.  It ran along the whole length of a garden, and the jumping frogs continued until we walked its length. No way to get a photo, they were not only very fast but very small.  I have never seen so many frogs jumping.  It made us wary of where we were putting our feet. 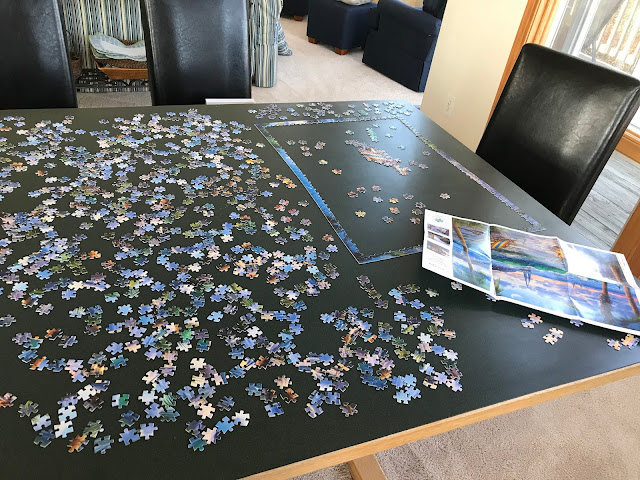 That was our day and we made our way back to the house to spend our evening with the family.  As you can see, a puzzle was in progress.

Posted by DeniseinVA at 9:55 PM