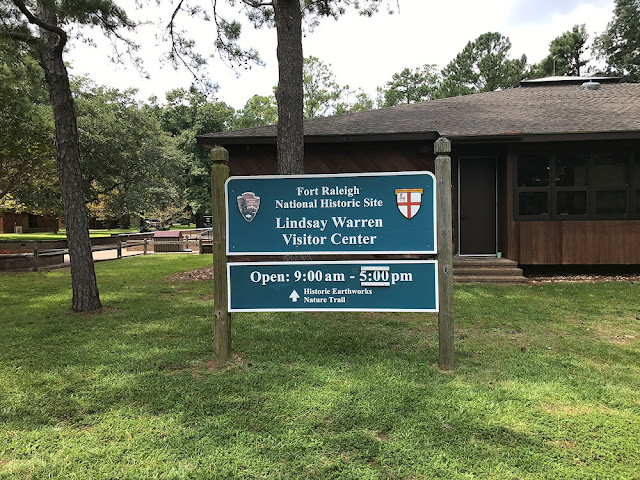 We drove to The Lost Colony in Manteo and looked around the visitor center.  It was a small building but very interesting.

The story of The Lost Colony is as follows:

"In 1587, 117 English men, women and children came ashore  on Roanoke Island, to establish a permanent English settlement in the New World.  Just three years later, in 1590, when English ships returned to bring supplies, they found the island deserted with no sign of the colonists.  After nearly 450 years, the mystery of what happened to the colonists remains unsolved." 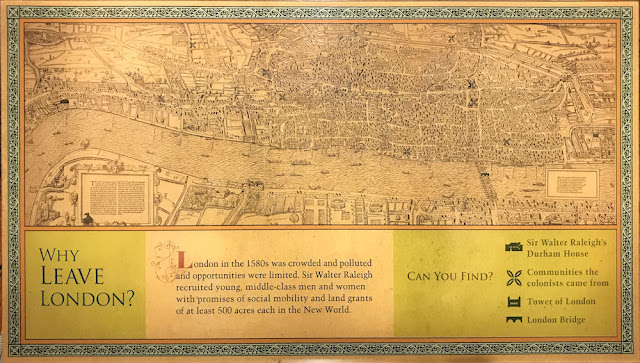 The above map shows where the colonists came from in London.  If you enlarge it you will be able to make out several places marked with an 'x'. 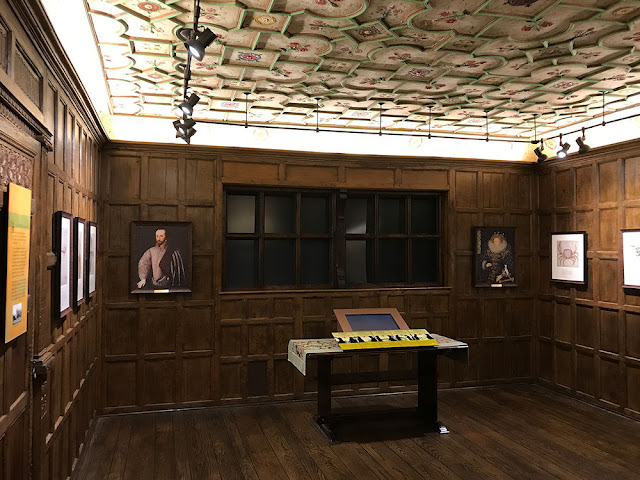 There was a room inside the visitor center with original paneling from the 1500's, portraits on the walls of Elizabeth I.   As you may know, the State of Virginia was named in her honor.  She was also known as the "Virgin Queen". 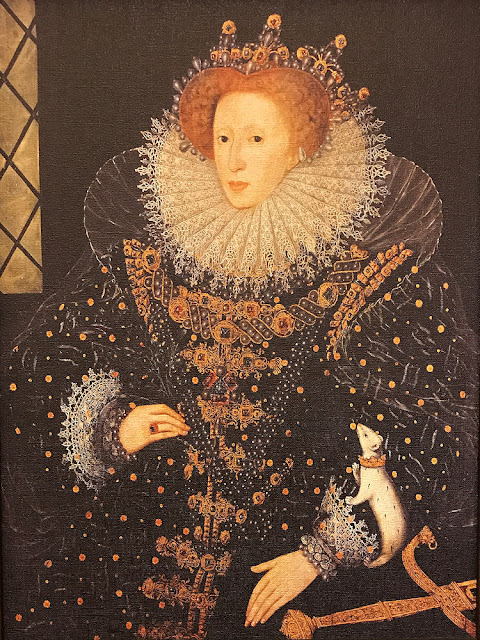 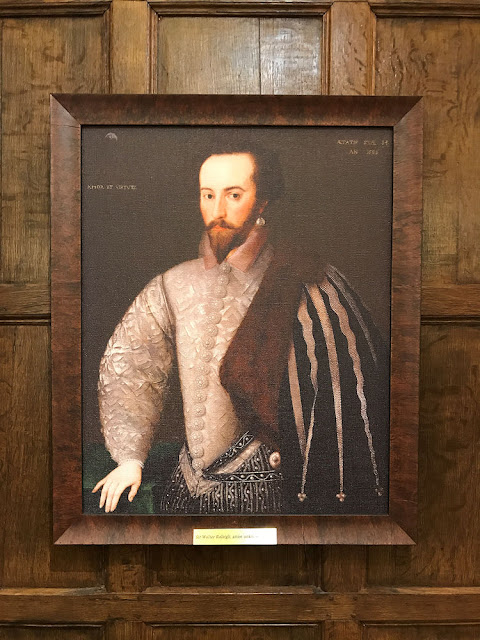 The photo below explains where the paneling in the room came from. 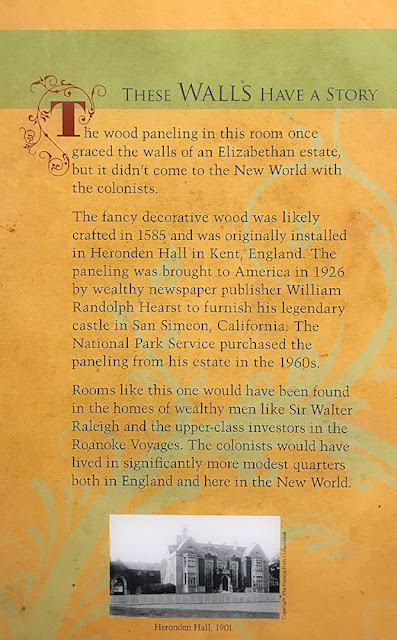 In part it reads:

"The fancy decorative wood was likely crafted in 1585 and was originally installed in Heronden Hall in Kent, England.  The paneling was brought to America in 1926 by wealthy newspaper publisher William Randolph Hearst to furnish his legendary castle in San Simeon, California.  The National Park Service purchased the paneling from his estate in the 1960s." 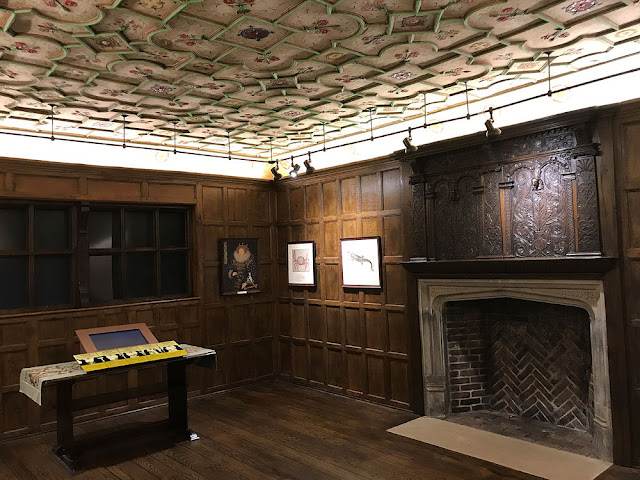 I am always interested in anything to do with Walter Raleigh.  His half-brother was Humphrey Gilbert and the Gilberts still live in Compton Castle, in the village of Compton, Devonshire, England.  I was very familiar with the Castle as it was close to my home and I passed by many times, on my way to any number of places.  My father years ago worked for a friend he knew from his police days, a solicitor (lawyer here).  When we all moved to Devon this friend got in touch with Dad and asked if he would be interested in helping him as he set up a practice. He had also moved to Devon, not too far from where we lived.  Dad worked at this practice for many years after he retired from the police force, even after his friend retired and the practice was sold.  Dad stayed on until his early 70s.  One of those Gilbert descendents was a Queen's Counsel and in my father's line of work, he got to know him.  In fact this very nice man came to Dad's funeral, which my sister and I appreciated immensely.  It showed us what a truly good person he was, and I will always think of him kindly.  My Dad was an excellent judge of character and he liked and respected him.  So, every time I see anything to do with Walter Raleigh, I think of my Dad and the connection he had to one of Raleigh's half-brother's.  A six degrees kind of thing going on, except not with Kevin Bacon but with a half brother of Sir Walter Raleigh?  You can click on the last link to see what the heck I am talking about.  Anyhoo, on with The Lost Colony and that beautifully paneled room. 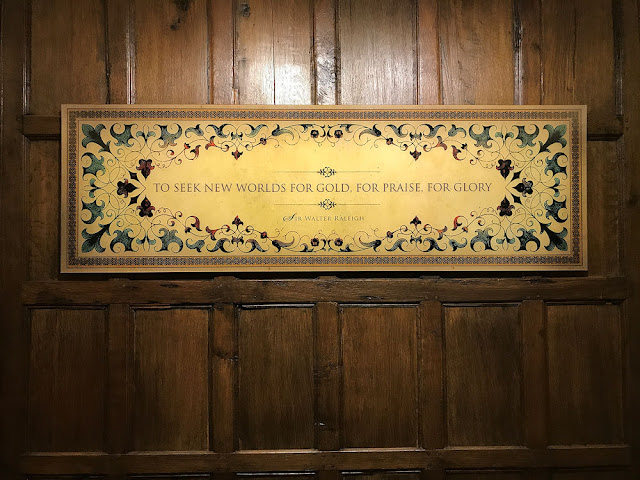 The old wooden paneling, wooden carvings over the fireplace, even the pattern of bricks inside the fireplace,  I found it all very interesting.   I also enjoyed looking at the framed pictures, and the ceiling, all truly remarkable. 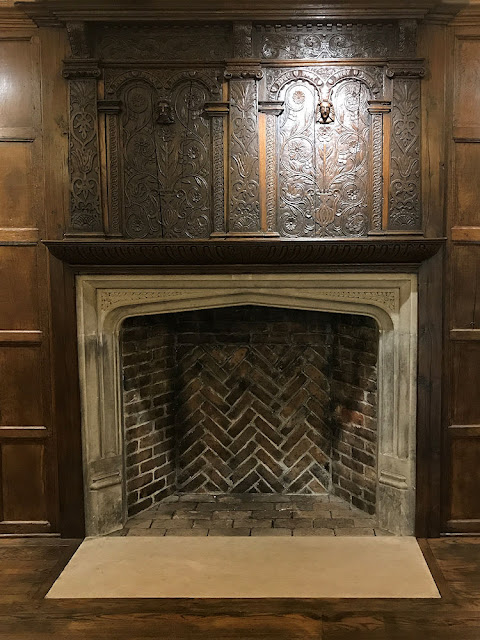 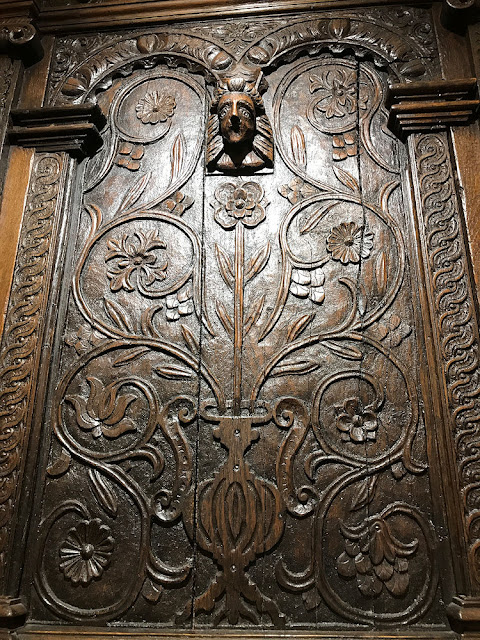 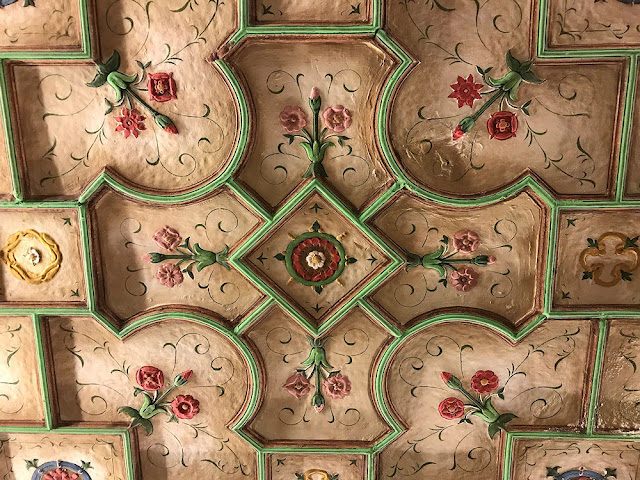 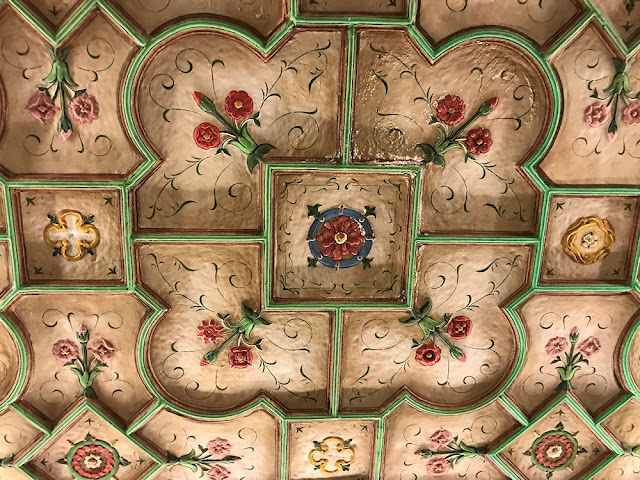 We browsed around the gift shop before we left, and Gregg bought a book telling the story of the Lost Colony.  I also bought a little rag doll representing Virginia Dare, the first baby to be born in the New World.  The date was August 18th, 1587, at Roanoke Island in colonial Virginia (present-day North Carolina).  I also purchased a few postcards. 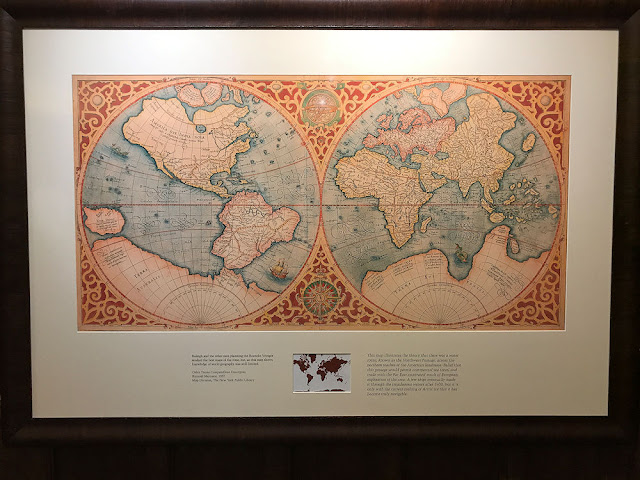 We didn't stay long as it was getting late, and we were rather tired after our enjoyable but very long day.  I have a feeling we will be visiting again.  We liked this area and we are thinking of coming down again, perhaps next year.  If we do, we will see the well-known Lost Colony play. 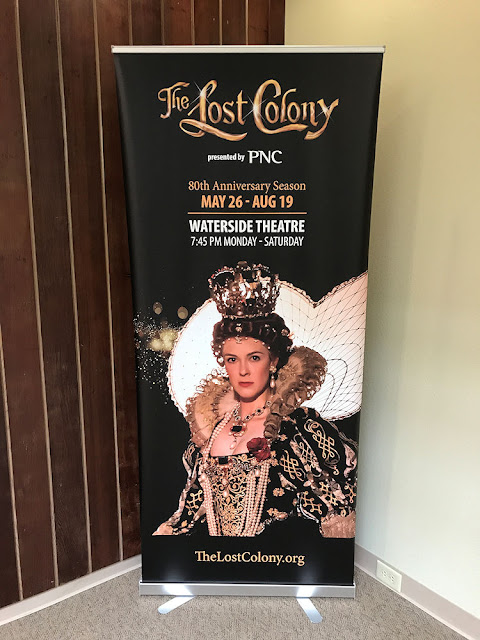 It is described as "America's longest-running symphonic drama", and held annually (the first production was in 1937 and this year was their 80th anniversary).  We were hoping to see it this time but found it has a run from May to August, and it had ended a couple of weeks before we arrived. 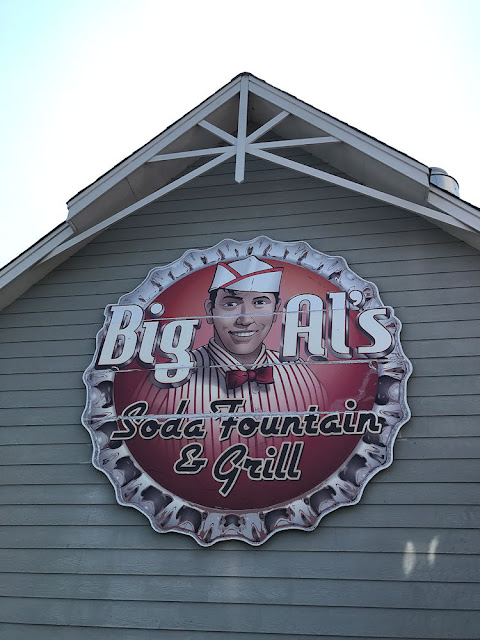 We were ready for a bite to eat, a late lunch, and we stopped at a cool looking diner, Big Al's Soda Fountain and Grill. 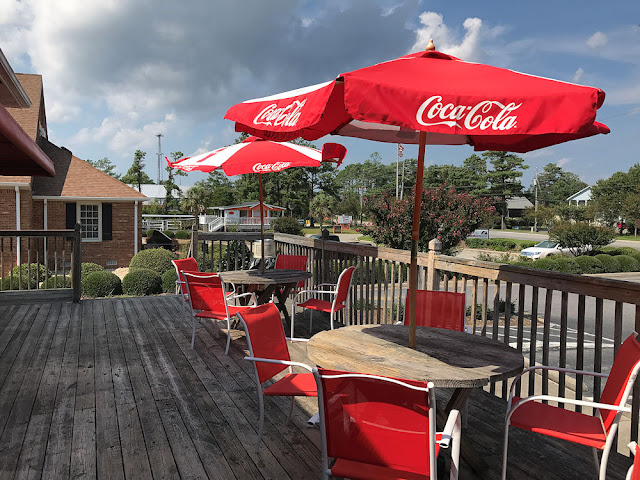 We ordered one meal to share, which came with two hotdogs, a pickle and French fries. We also shared a strawberry milkshake for dessert (no photos). 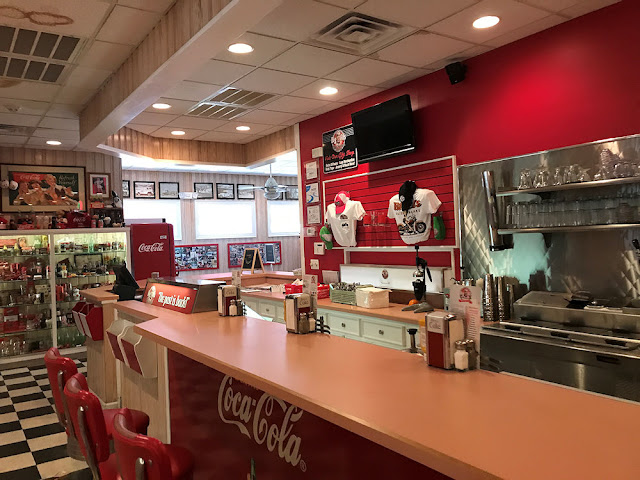 The waitress was super friendly and the decor was fun. 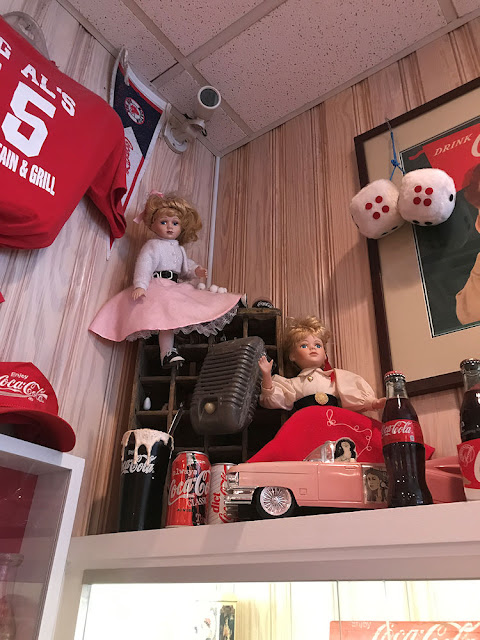 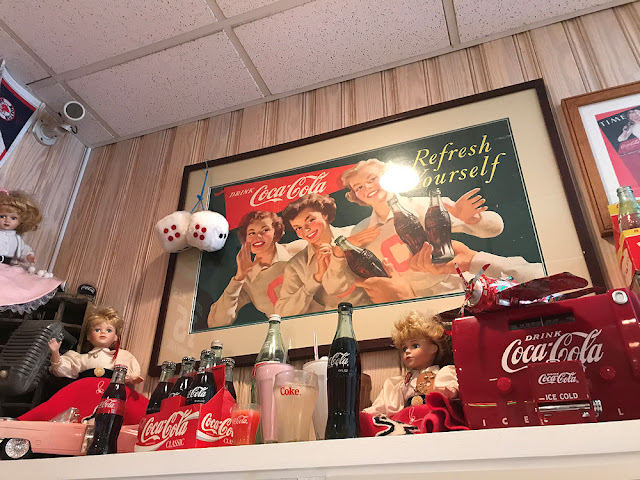 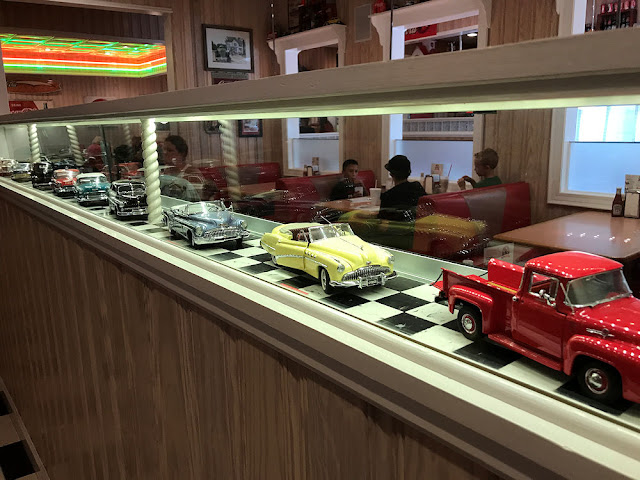 They even had a dance floor.  The lady who looked after us asked us if we would like to dance.  In the kindest possible way, we said an emphatic no and when she still tried to persuade us, we followed up with a shake of the head and a chuckle. 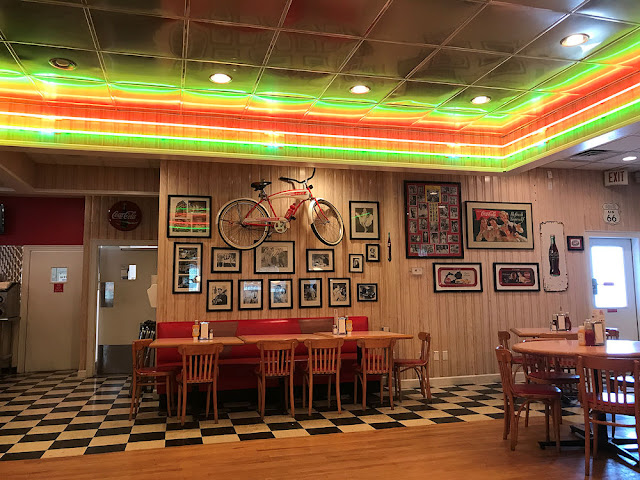 Back to the house and shortly after returning I tucked myself away in our bedroom downstairs. I was eager to see the photos from our day, and I had promised before we left home, that I would share with family and friends on a regular basis.  There was a football game on the TV upstairs, and Gregg watched the game with the rest of the family. I am not a sports person so after a while the photos were calling and begging to be downloaded.  I also caught up on laundry.

8.00 p.m.  I was called upstairs for dinner.  My sister-in-law had cooked a delicious shrimp and scallop scampi (again no photos but she is a really great cook).  We also enjoyed a glass of wine. After a leisurely meal everyone settled down to watch football again, so as those photos were still calling me, I had an early night and that was the end of my day.

Just for fun I thought I would add a YouTube video of Robert Newhart talking to Sir Walter Raleigh on his findings in the Colony.  Click here to see it.  It is years old and I remember my sister's husband telling me about it.  It was good fun then and hope you find it just as funny now.
Posted by DeniseinVA at 12:57 AM