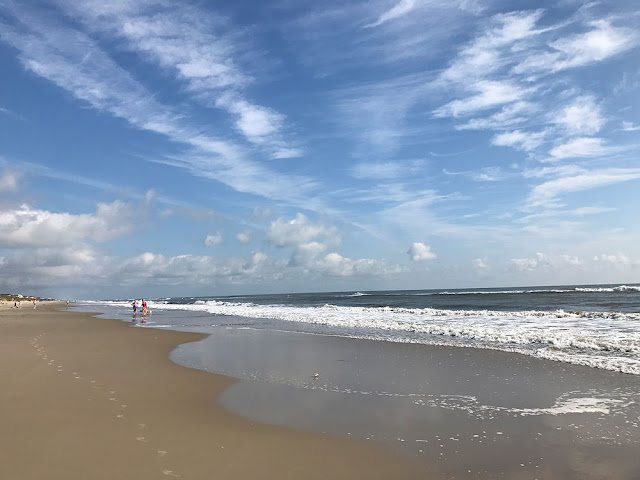 We started the day off by having a lovely walk along the beach.  The weather couldn't have been more perfect for a Labor Day Weekend.  Hurricane Irma was on everyone's mind and the weather channel was on for a lot of the time when we were all back at the house. 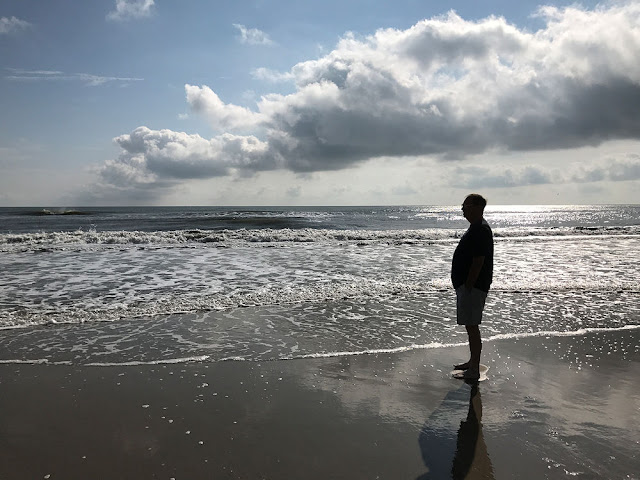 Even for a holiday weekend there weren't a lot of people on this particular beach.  Most of the crowds have gone home now that school has started.  It was like this all week. 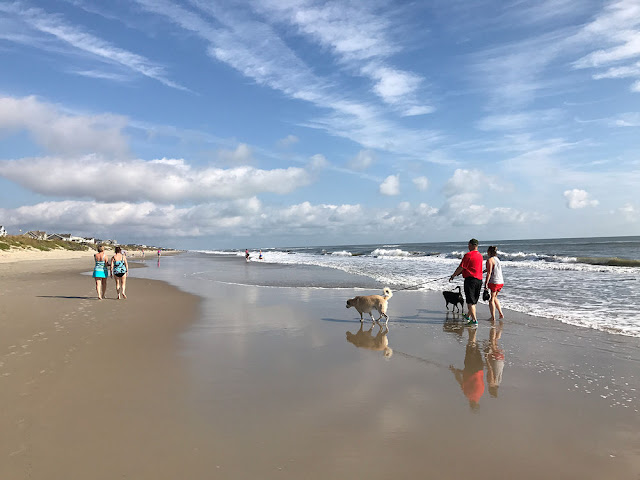 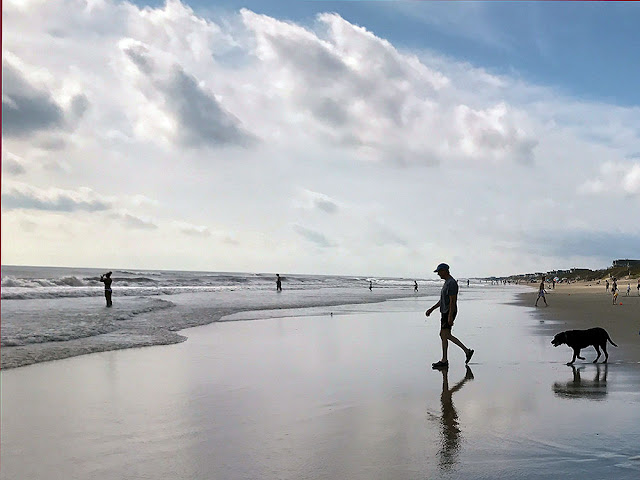 A selfie taken with the sun behind us, and outstretched arms holding camera showing in the reflection of the sunglasses.  I wish I could say this was my artsy shot but not really. 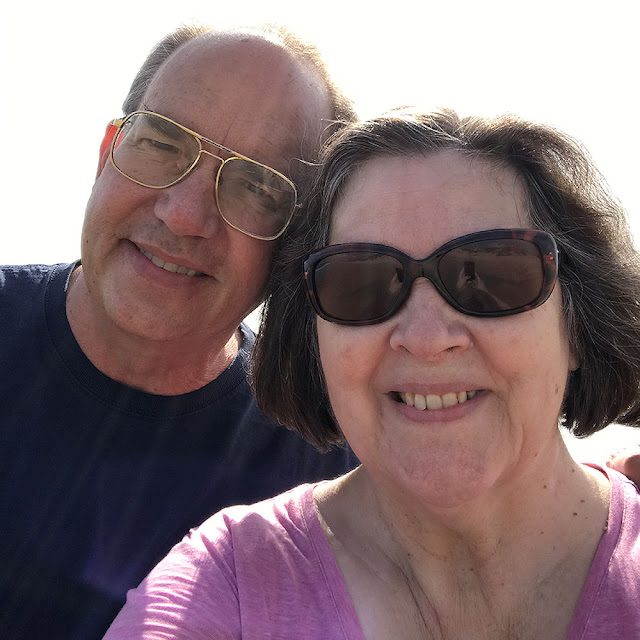 The photo below shows the top of the house that Gregg's sister and her husband rented for the week.  It was very pretty inside.  I will share some of the nicknack photos I took in a future post. 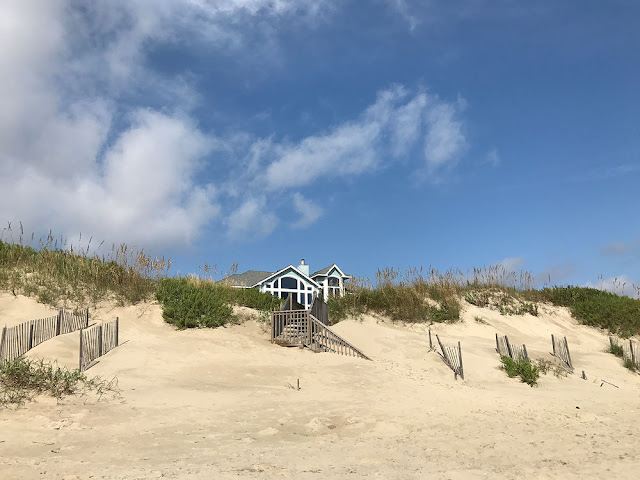 I was told the grasses growing on the top of the dunes were called Sea Oats. 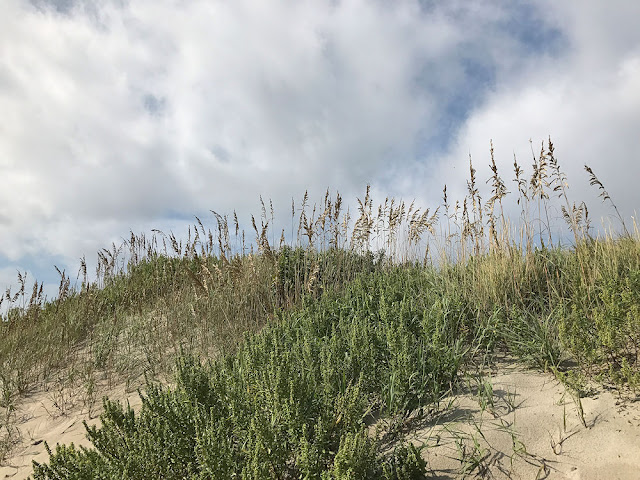 The night before our brother-in-law's brother and his wife asked us if we would like to go with them on a tour to see the wild mustangs which are famous in this area.  We happily accepted their invitation. 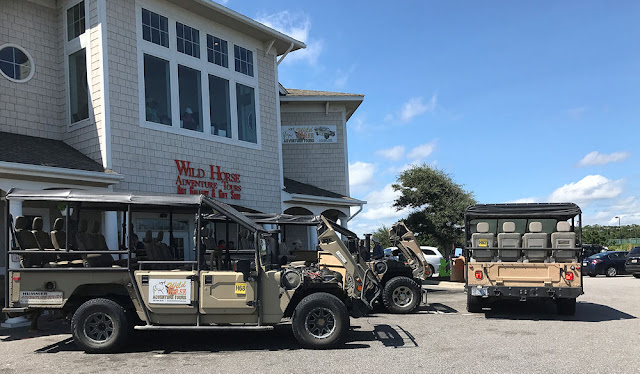 The next day we drove to the tour company where we hopped onto a multi-seated hummer, which drives along the beach as well as on a few sandy, non-paved residential roads, anywhere the horses tend to go. 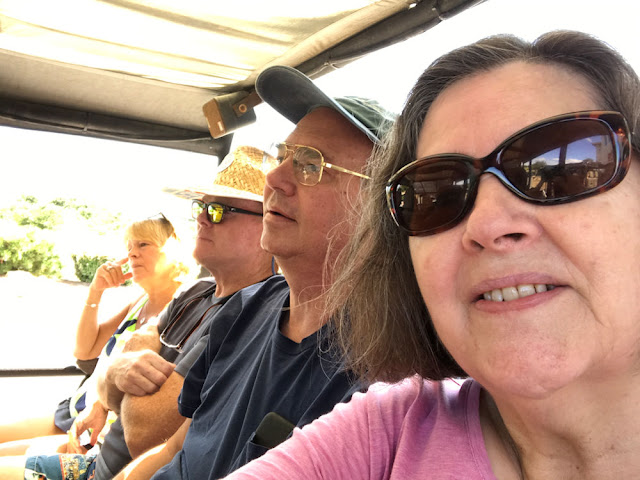 You could not drive in the reserve without a four-wheel drive and those big, wide tires. 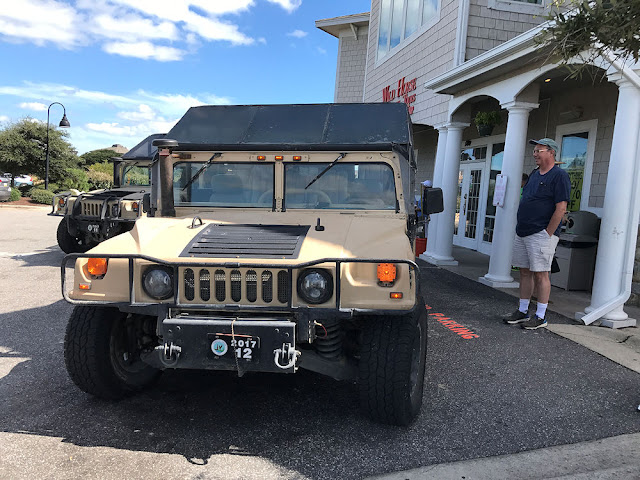 To get to our seats which were at the back, and after climbing up a step ladder to actually get on the hummer, on our side we had to climb over three rows of seats, which included that of the driver.  Thankfully they had been laid flat.  I wish someone had been filming us, or maybe not.  It would have fitted well into a comedy routine. 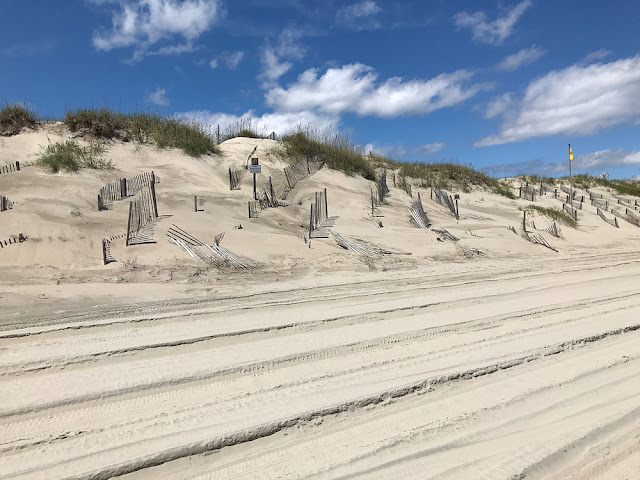 We drove towards the reserve and eventually found ourselves on the beach with other Labor Day beach goers, all parked in the middle of the wide sand. 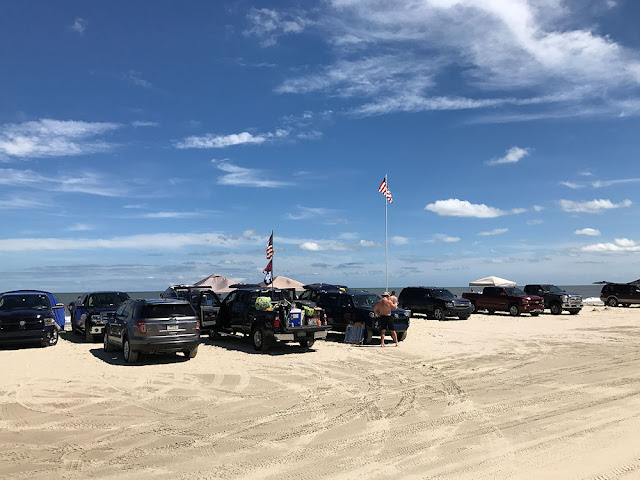 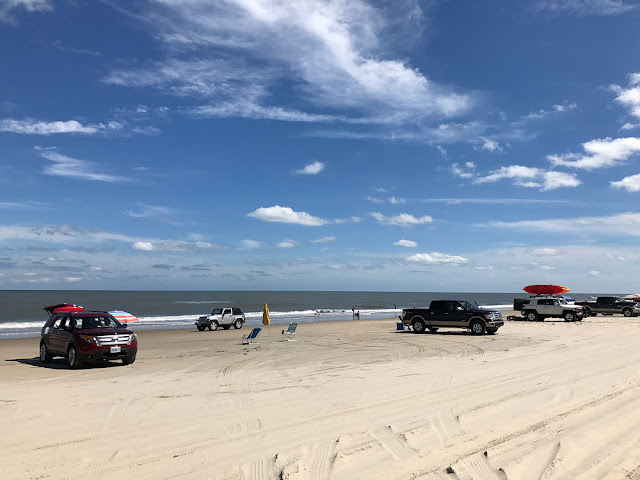 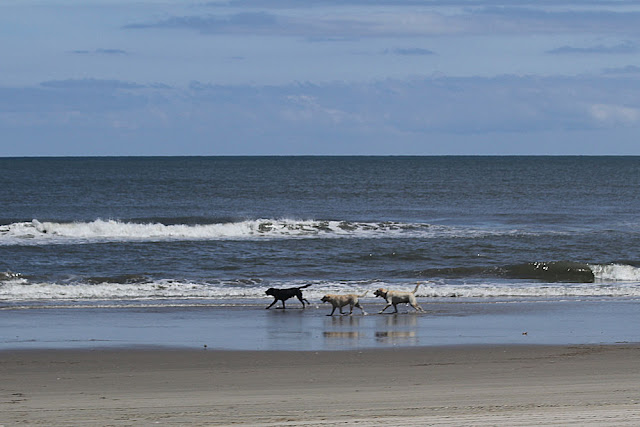 We were hoping to see some horses on the beach but they were probably hiding from all the tourists. 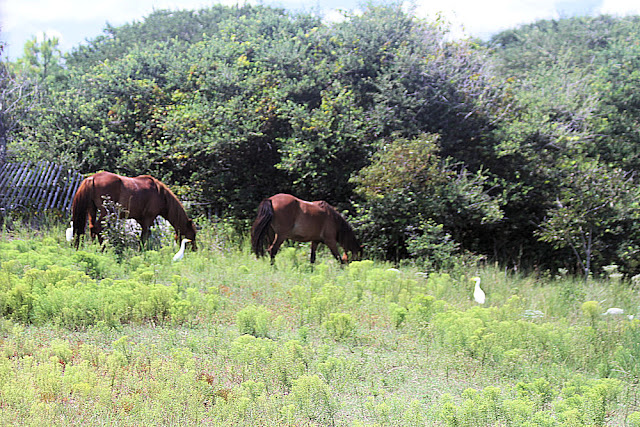 We eventually found a few of them in the residential areas. 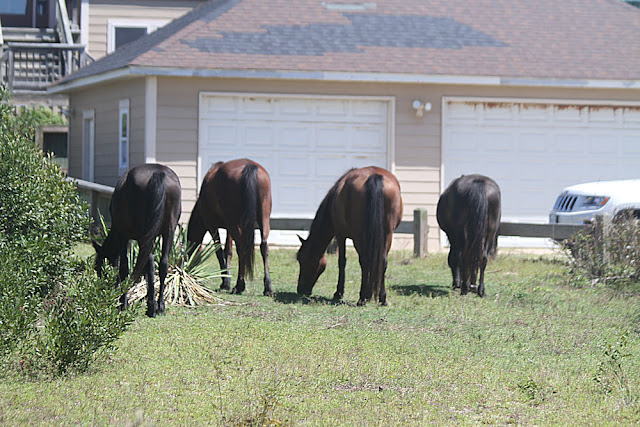 Through DNA testing these beautiful animals have been proven to be the descendents of the Spanish mustangs brought to the New World by explorers and colonists, as long ago as the early 1500s.  There were also many shipwrecks along this coast and it is thought that when those ships hit the rocks, many horses were able to swim to shore.  You can read about one shipwreck in an article here, which I found very interesting. 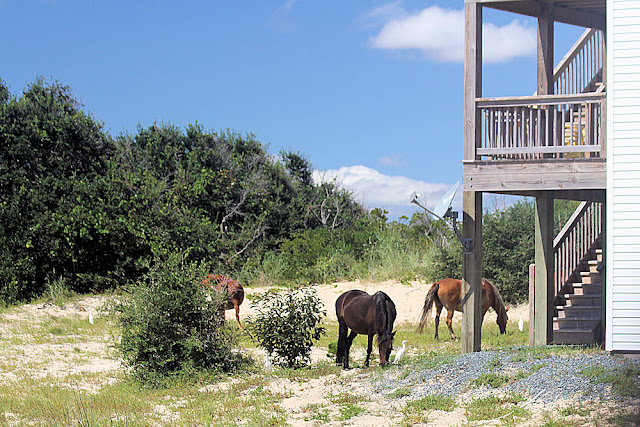 Several horses were happily munching grasses in people's gardens.  The driver told us that they also like to rest in the shade of car ports... 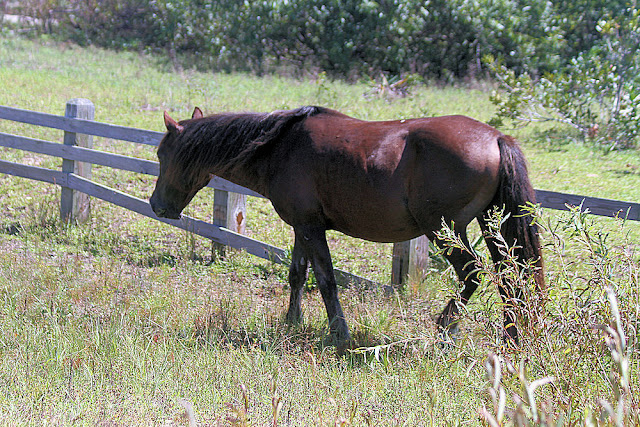 and constant companions seemed to be the cattle egrets. 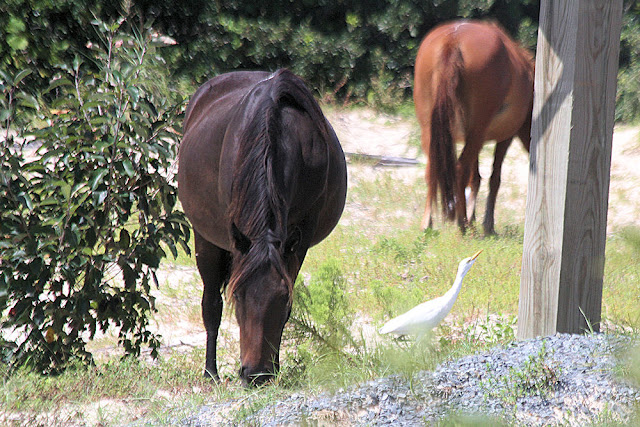 I will have another post in the near future.  I took a load of photos, too many to share today. 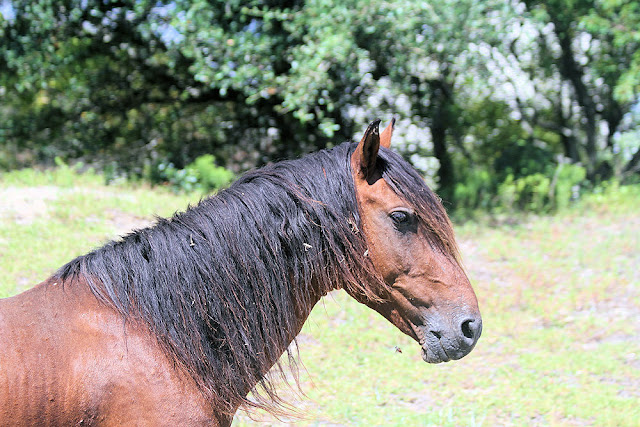 We had a fun time driving back along the beach again.  In this short video you will see a hummer nearer the waves.  This was from the same company and identical to the vehicle we were riding in.  If the video doesn't show, you can see it on YouTube here.

At the end of our ride and just before we exited the reserve, we saw this lovely sight. 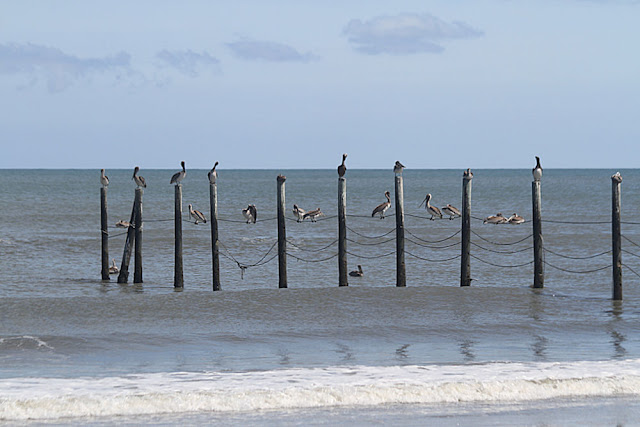 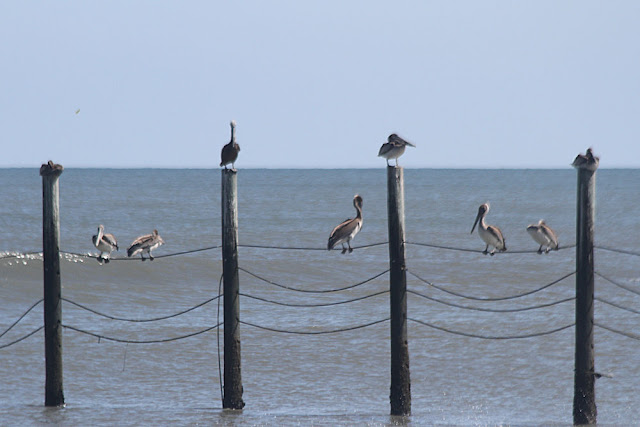 I can highly recommend Wild Horse Adventure Tours.  Our guide was a wealth of knowledge not only about the horses but about the area also.  I am having trouble remembering his name but Gregg thinks it was Charlie.  He only did the tours part-time and he was a grandpa.  Charlie was great but if you look on Yelp you will see that there are many positive reviews about the tour guides.   They have a Facebook page which you can see here.  There are very nice aerial views at the top of their page.  It gives you a great feel of what you will experience if you are in the area. 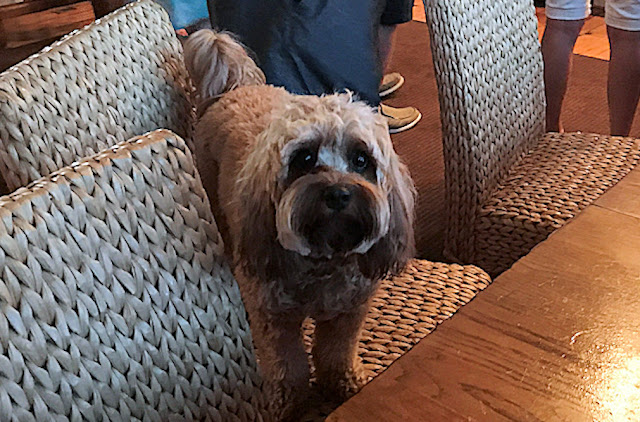 In the evening we went to the celebration I mentioned in my first post, and this little cutie was one of the guests.  More on that next time.