We are happy to enlarge our walking areas, each within a not-so-long car ride from home. Occoquan Bay National Wildlife Refuge is one we discovered last year, and we were happy to add it to our favorites list, where we go for exercise in their beautiful surroundings.  Marvelous places in any season, always changing and always something new that keeps feeding our love of nature. 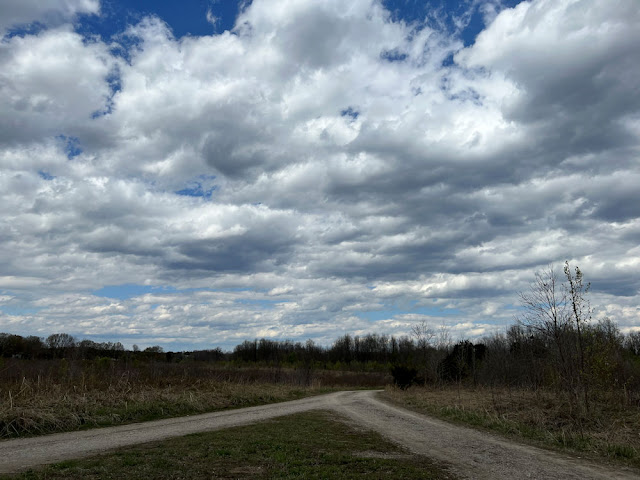 The weather was starting to warm up.  The sky had lots of clouds and we were glad we went early, as rain was forecast. 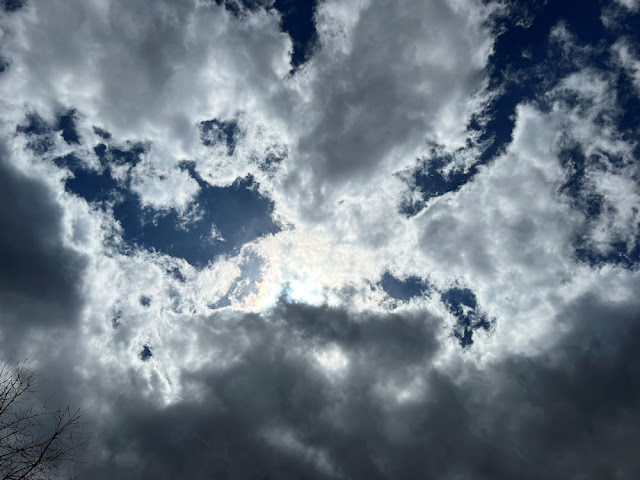 Our intention was to walk to the pond. 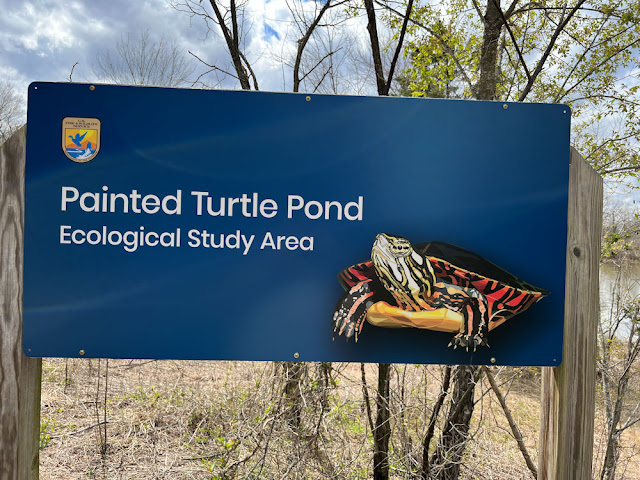 Our short cut was still a bit of a trek.  When we arrived two other gentlemen, both with tripod and camera, were the only other people around.  One had been sitting on the steps leading to a small dock. The other was in long grass in a field, looking toward the trees and pointing his camera in the direction of the many bird calls.  I am not sure if he got any photos, and we didn't want to disturb either of them, they were so focused. 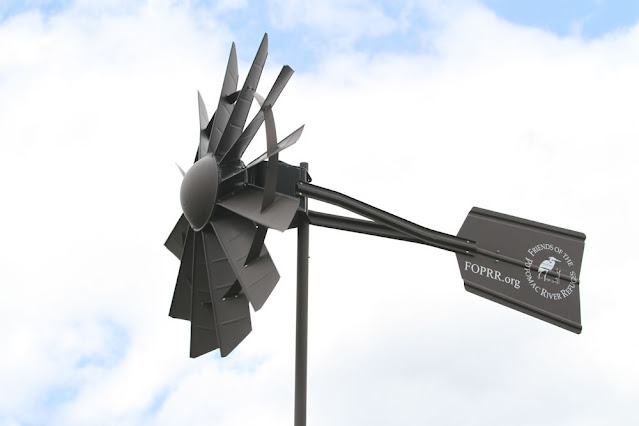 Gregg left to take photos in another direction.  I took a seat under a sheltered picnic area, and watched them from the shadows. The two men seemed to know each other but left separately.  A short while later Gregg joined me. He took a photo of the windmill right next to the picnic tables. I thought to take a shot of it but the moment passed and I was glad Gregg took this one. 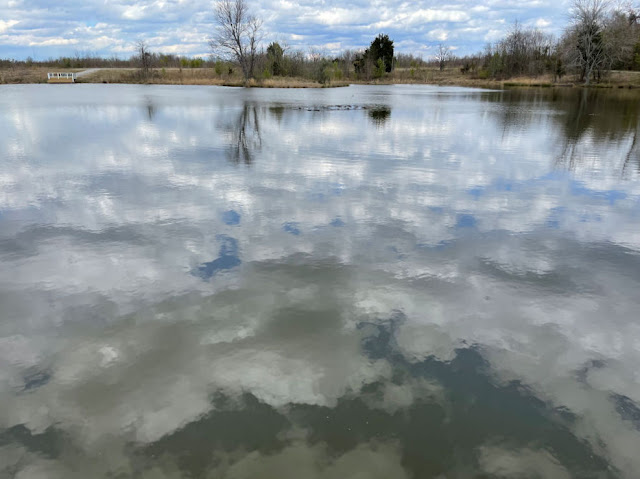 The photo (above) with the beautiful reflection of the clouds that day, was also taken by Gregg.  You can just about make out a round circle resting on top of the water, not too far from shore.  Here is a closer look.  We think it is some kind of filter system where several turtles like to rest.  There weren't as many as the last time we were here.  The photos with the inserts are what he took, and I put the close-up circles into the photo, because I had time to play with my Paint Shop Pro for an hour. 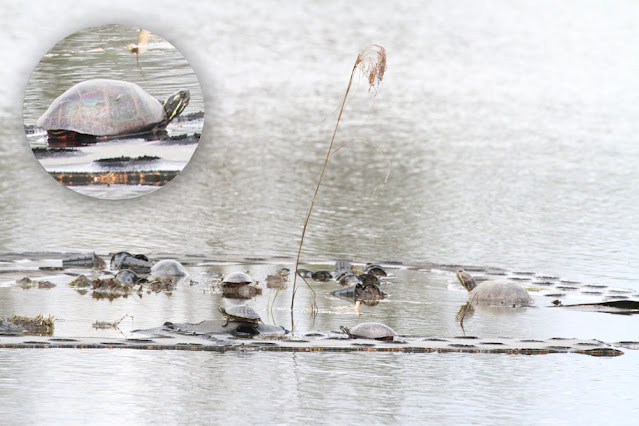 On the other side we saw a duck and we stared, and we stared and we stared, ever hopeful that he was going to be joined by his companions.  It took us a few minutes to realize it was a decoy.  There were no other birds on the lake. 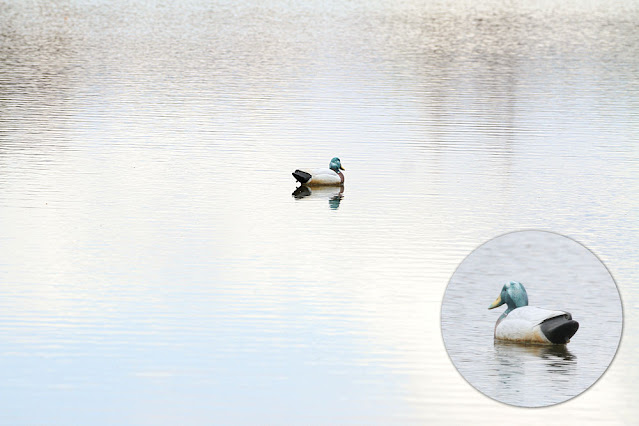 There were Turkey Vultures flying overhead. If you click here you can read interesting facts about them.  They are not everyone's cup of tea but they do look magnificent in flight.  Their scientific name is Cathartes Aura, which means in Latin "cleansing breeze".  Researchers have determined that they can travel up to 200 miles in a day.  Also, their average height is 2-1/2 feet tall with a 6 foot wingspan and yet as big as they are, they only weigh about 3 pounds.  Here you will also read how they are considered nature's clean-up crew. This last site is the Wildlife Rescue League. 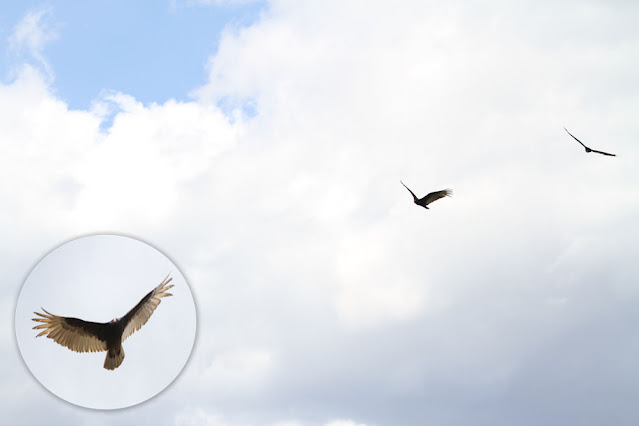 American Robins always seem to be present.  Normally I see them hopping around on the ground, but Gregg found this one high in a tree.  I have mentioned this before but they are unrelated to the European Robin, and ours are actually part of the thrush family.  Early colonial settlers named them American Robin because of its resemblance to the smaller European Robin they were familiar with.  You can read a lot more at the above website. 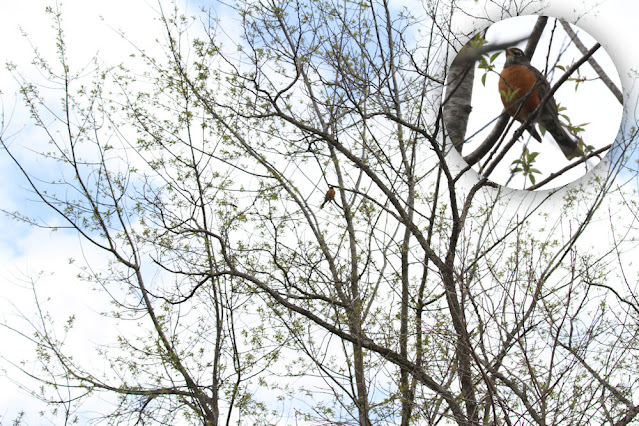 Later I spotted a Downy Woodpecker.  It was nice to see one other than at my feeders out back.  I couldn't get a closer shot as Gregg had the camera with the zoom, but I wanted to practice with the zoom on my phone.  It worked pretty well considering. 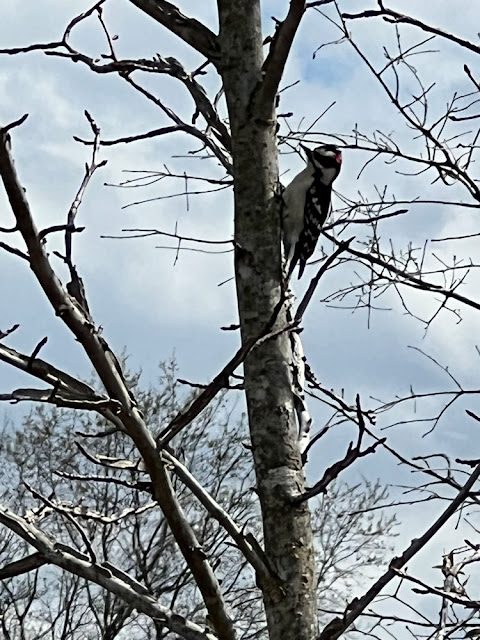 You can just about see the little splash of red on the back of his head, (enlarging the photos help) which tells me that he is a male.  There is a lot of interesting information at this website, where I found the following.
"Legend has it the red patch of the male bird inspired legends with many Native American Tribes across the United States, from being a fire detective to bearer of a warrior's badge of courage.  This bird has been a symbol of bravery and hard work.
Special feathers around their nostrils keep them from breathing in wood chips.
Their brain is protected from shock by a pad of spongy elastic material between their bill and their skull.
Woodpeckers may hammer on a tree as much as 10 times in a minute.
Downy woodpeckers create nest hole openings that are hidden by fungus or lichens, which resembles green spongy moss."
A lot more interesting information can be read at the link above. 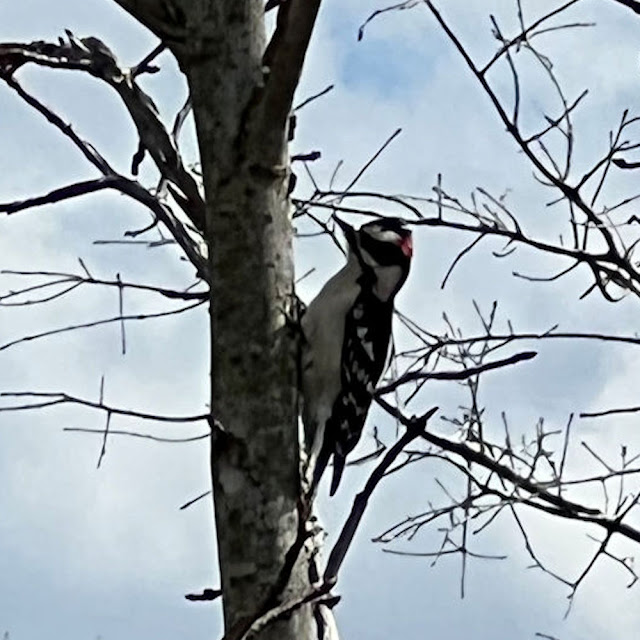 Searching online, the closest I came to identifying the flower below was the Common serviceberry (botanical name Amelanchier arborea), and are native to Eastern North America, according to The Spruce website, found here.  There is a very nice illustration of the different types. 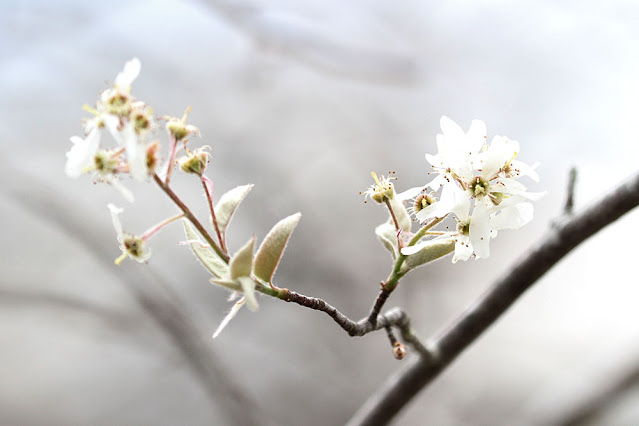 Below is photo from a different tree on the same trail but is also a Common serviceberry.  My plant app (PictureThis) came up with the name, and then I did an online search to compare.  Their berries are an important food source to birds, when other types of fruit are not yet ripe. 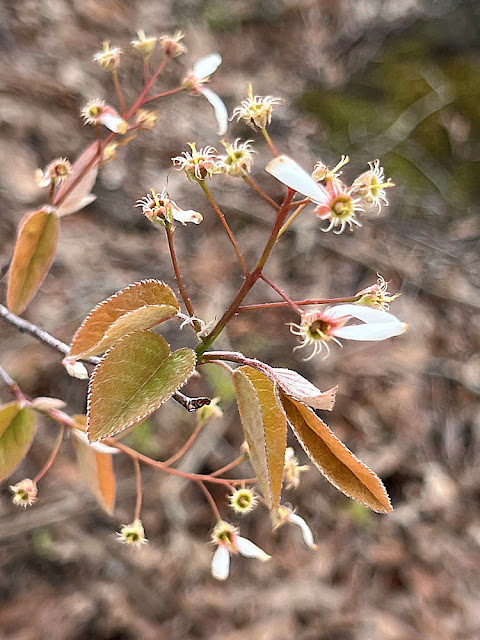 My next picture you may have seen in yesterday's post.  The bud is still opening and soon it will be more easily identifiable as the Flowering Dogwood.  There is a good website at this link giving more information.  Its botanical name is Cornus florida, and common names are American boxwood, Flowering cornel and Virginian dogwood.  It may grow from 15 to 25 feet tall, and is native from southeastern Canada to eastern North America to eastern Mexico. The genus name comes from the Latin word for horn, cornu, most likely in reference to the tree’s hard, dense wood. 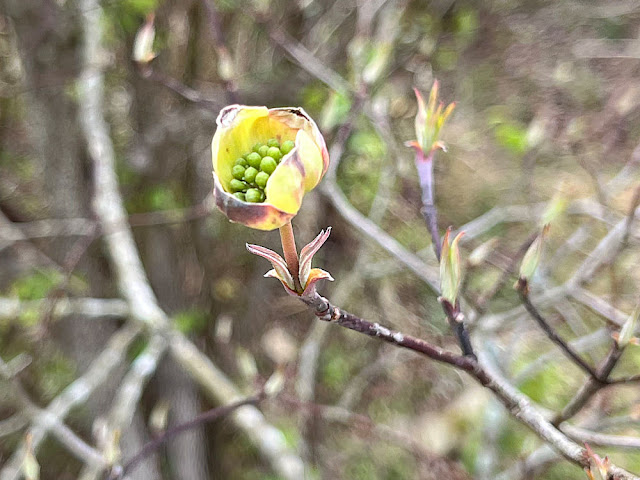 We are coming to the end of our walk and the skies have been the most beautiful blue with lots of puffy clouds, but we knew that rain was on the way.  When we were driving home it started to sprinkle but it was a gentle rain and didn't last that long.  By the time we got home it had stopped. 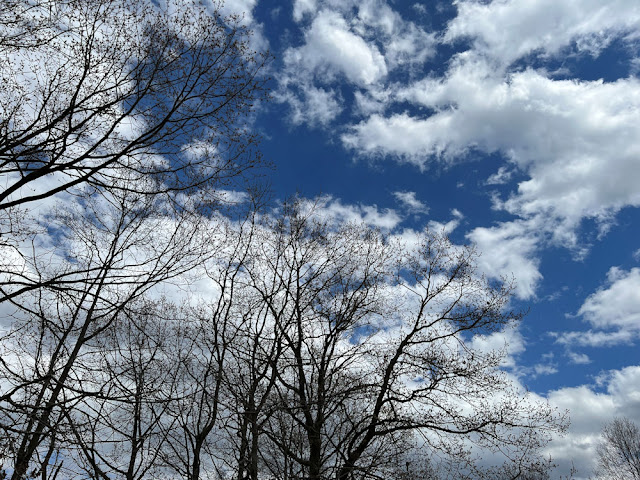 We have seen many Ukrainian flags hanging outside people's homes, in our neighborhood, in other neighborhoods as we drove to Occoquan.  They were everywhere, and we saw them along country roads on our way home. 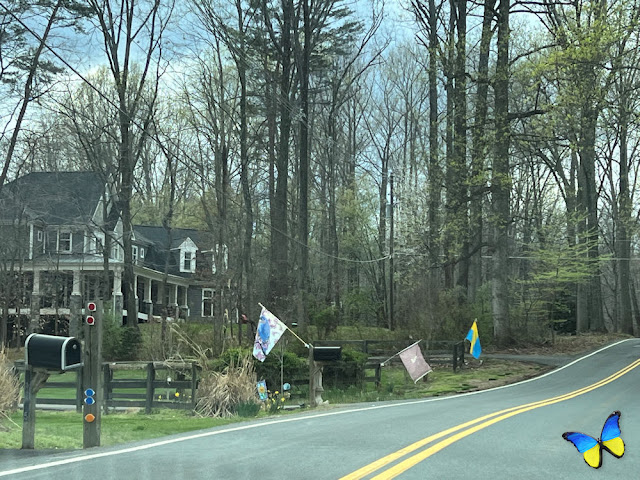 Still praying that peace comes to them very soon.
Thank you for visiting, and I hope your day is a happy one.