With more time at home I am enjoying going through our travel photos.  The following were from a trip we took to the Grand Teton National Park in August of 2007. We stayed at the Jackson Lake Lodge.  Since this trip we have been back a couple of times but not for quite a while now. 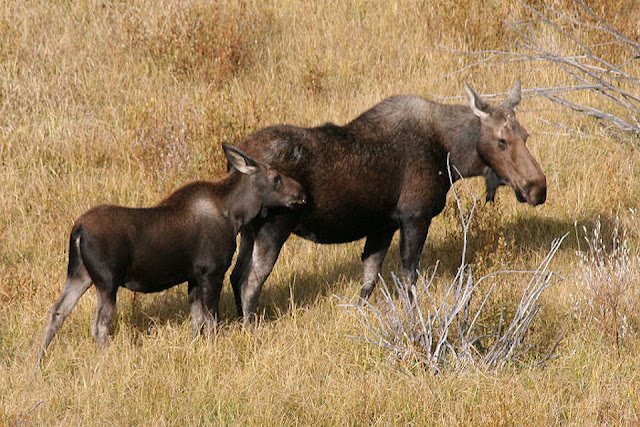 One day we saw what only can be described as a buzz of activity from several people with cameras  on the overlook. We had been in the sitting area of the Lodge, where the windows reached from floor to ceiling. 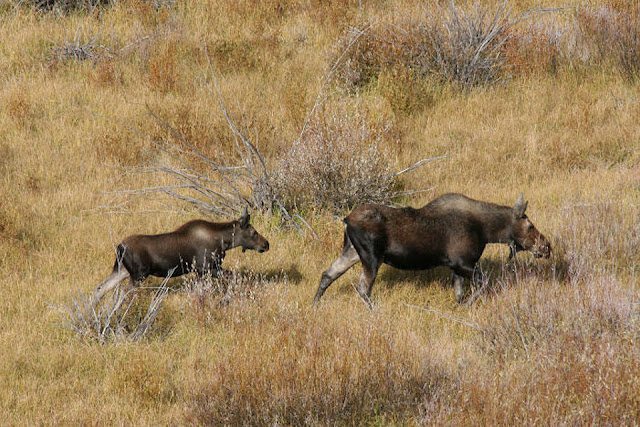 When we looked to see what was going on we saw Mother Moose and her calf not too far below. This was our fourth sighting on this vacation, and they were closer than the other three. It was very exciting and I just about fell out of my shoes when I saw them. Before this trip I had only seen these amazing animals in photos or on nature shows, and as I looked at them this wave of happiness came over me, I can't describe fully how I felt. 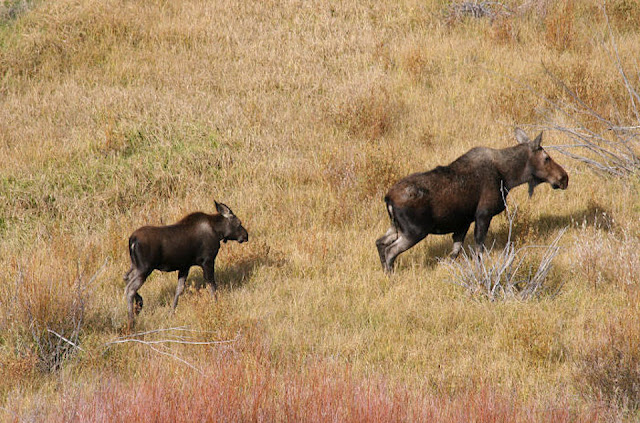 Mother, in the photo below, is doing what any mother would, waiting for her little one to catch up when he or she lagged behind. 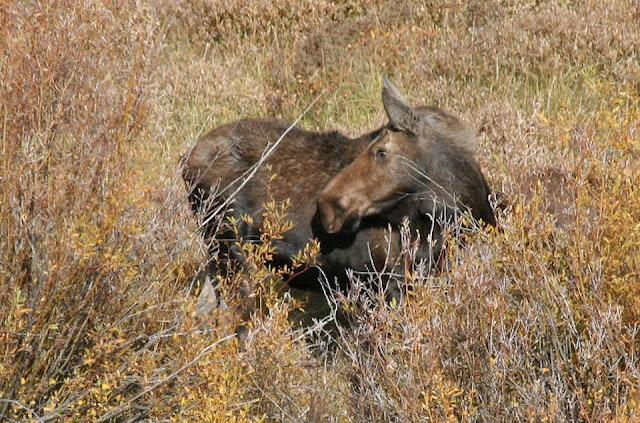 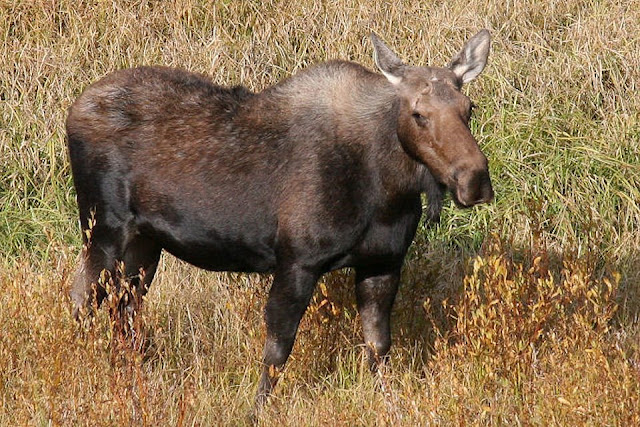 The following photos show another mother moose and calf from the previous day, when we were near a dam. We weren't as close here but it was our favorite moment as it was such an idyllic spot. 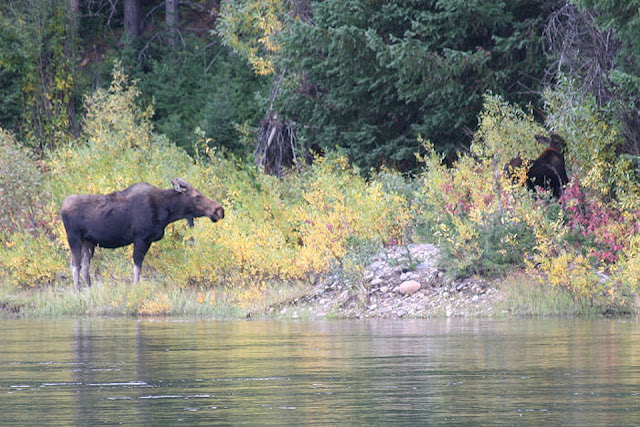 I was already happy as a sandpiper having been in the company of two adorable chipmunks who had joined me as I sat next to the river enjoying my surroundings. We were obviously not going to get any closer as we didn't want to disturb them but also for our own safety.  I made the most of my new zoom lens, which we had invested in just for this vacation. 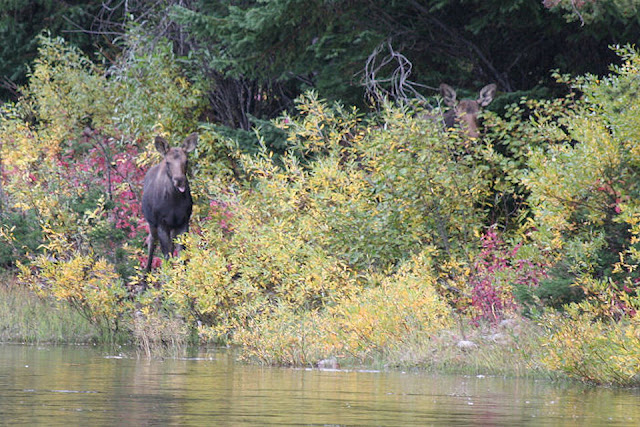 Do you see the extra set of ears to the right of baby? Mum is keeping a watchful eye, come to think of it so is baby. We have been spotted and it wasn't long afterwards that they disappeared back into the brush. What a magical moment they shared with us. 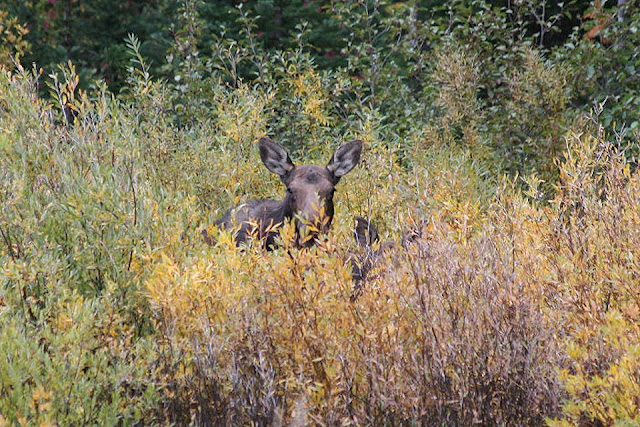 On our way back to the Lodge more people on the side of the road and of course we had to join them. In this scene there is a standoff. On the left is another mother, in the middle is her calf and on the right is a very cantankerous bull moose. We watched him as he galloped up and down and stomped his feet, he was not a happy bull moose and this went on the whole time until after about half an hour we decided to move on. Mother was having none of him being very protective of her calf. Bull Moose was not a happy moose. 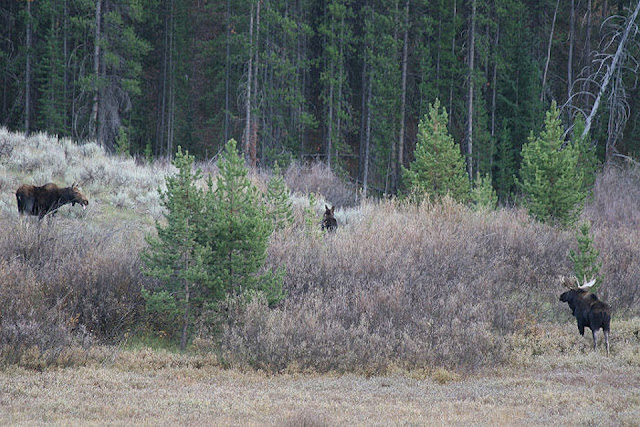 In the last two photos we were in the northern part of Idaho on our way here.  It was our first sighting ever of a very unexpected moose. Gregg had decided to follow his nose and get off the map that I was following, just to see where this road took us. Sweet Other Half is a 'follow your nose’ man, and I am a 'butter my bread from corner to corner' kind of girl.  I follow those directions to the ‘T’. We are a good balance he says and meet each other somewhere in the middle but I have to admit, I get a little fussy when I know we are off the beaten path because I don't like getting lost. "Are you sure you know where you're going." "Are you absolutely positive we're not going to get lost?" I always have visions of having to sleep in the car and we were in the wilderness. I know that wouldn't be so bad to sleep in the car, as believe me I have done it before (maybe when I was ten), but I really don't like getting lost, and we were also in bear country. With Gregg we always get off the beaten path, his sense of direction is excellent and I should know better by now, but I can't help myself. I really don't like getting lost! Have I mentioned that before? 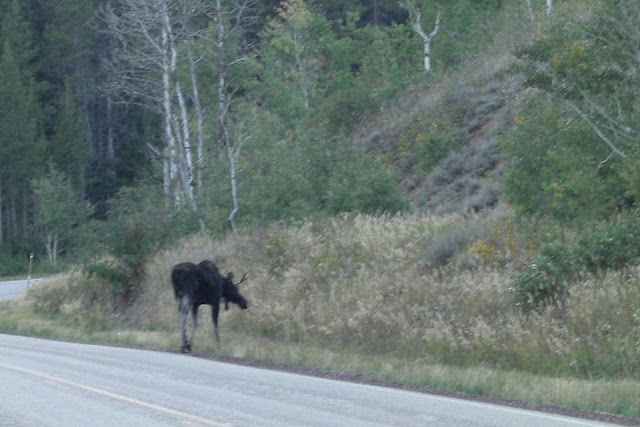 Well, here we were lost! But it was the best thing that happened because this is what greeted us when we came around a bend. Our very first sighting of a moose ever. No, he wasn't close and these photos were the best I could get but oh my, I just about did a double flip and I looked at Gregg after the moose had disappeared into the woods and I hugged him and thanked him for getting off the beaten path. It always works out somehow, and it wasn't long after that we got back on track and were heading for the Grand Tetons.  I knew these gorgeous animals are big but he was huge! 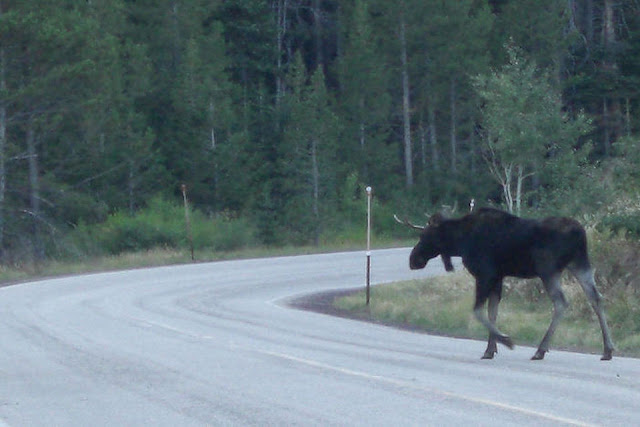 With all the thanks I could muster to my Sweet Other Half, he really is the best 'get off the beaten path' husband who always ends up finding his way, and next time we go on a road trip I will zip my mouth because you just never know what is around the next bend. "Yeah, right!" I hear him say, and yes we are both smiling.

Writing in August 2008, I wrote that Gregg is on his own trip right now. He just called me from the airport about ready to get on the plane for Kansas City. It's going to be a quick trip as he heads back tomorrow (this original blog post was before retirement when he used to travel quite a lot on business so no, Gregg is safe at home with me and we are following all the safety guidelines).

Thanks for traveling back with me a few years ago, and I hope your day is a great one. 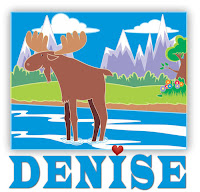