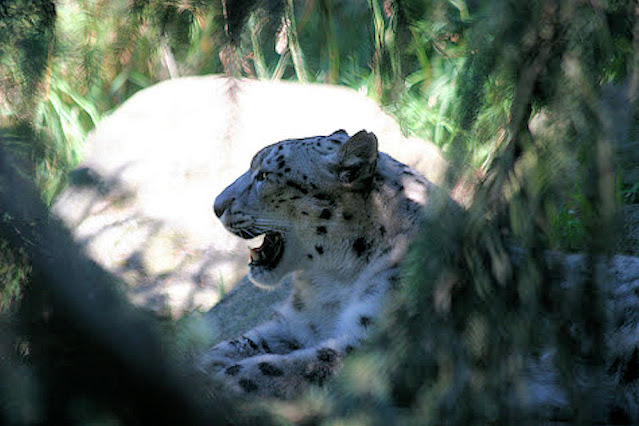 These are a few photographs we took at the Woodland Park Zoo in Seattle, in August 2010, in the Big Cat area.  I thought it so beautiful and for a hot summer's day, seemed very relaxed. In their own natural environment they are well adapted to their cold environment.  They can be found in the mountains of Central Asia, and its habitat extends through twelve countries: Afghanistan, Bhutan, China, India, Kazakhstan, Kyrgyzstan, Mongolia, Nepal, Pakistan, Russia, Tajikistan and Uzbekistan.  Not sure how up-to-date this information is but the article I read said there are only between 3,390 and 6,390 snow leopards left in the wild. 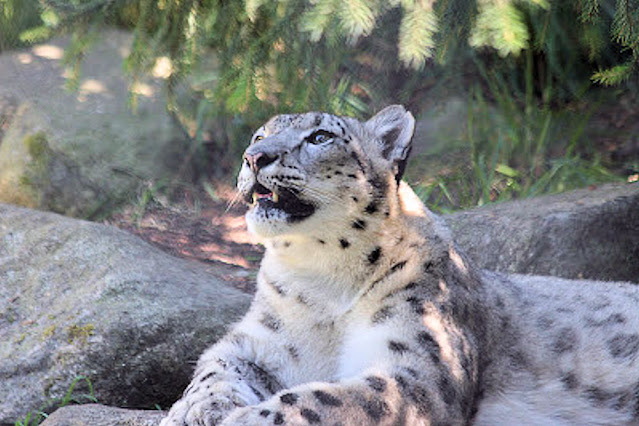 They are medium-sized cats.  This means that they will be around 24 inches (61 centimeters) at the shoulder, and between 39 to 50 inches (99 to 129 centimeters) from the nose to the base of the tale.  A snow leopard will weigh between 60 and 120 lbs. (27 to 55 kilograms).  Their fur keeps them well insulated in cold weather.  It is nearly five inches long on their stomach, shorter on their back and sides.  It has short forelimbs, long hind limbs and a thick tail 31 to 39 inches long (around 89 centimeters).  The tail aids in balance and they also wrap their tails around themselves for added warmth. 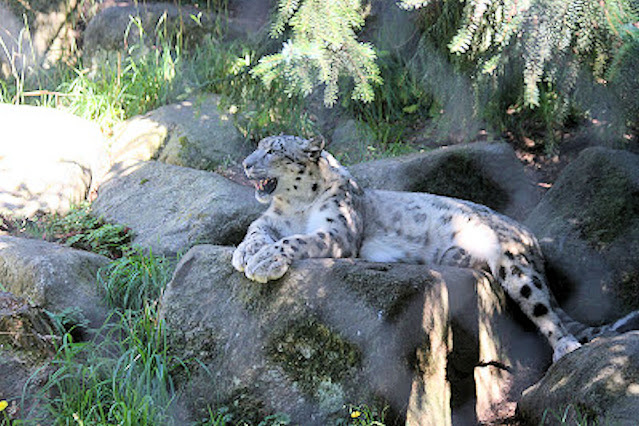 Interesting Facts about Snow Leopards
They are often called the "ghosts of the mountain" because they are so rarely seen and spend most of their lives in solitude.
They can't roar.  Instead they growl, yowl, mew and prusten (also called chuffing, a non-threatening vocalization made by blowing air through their nose).
A study recorded snow leopards living at the highest altitudes ever documented for big cats - 5,859 meters (about three miles) above sea level - about the same height as Canada's highest mountain.
Their thick, massive tails, which shield them from the harsh weather and help maintain balance, are almost as long as their entire body.
They can prey on animals up to three times their own body weight.
Their paws will be larger than an African leopards, or a cougars.  Their wide feet act like snow shoes.
Their fur varies from white to cream to pale yellow or grey, sprinkled with rosettes (open spots) of charcoal-grey to black.  In the wild they blend perfectly with the rocky slopes where they hunt.  Each snow leopard has a unique spot pattern, its own personal ID.
The snow leopard's tail is its most distinctive physical feature.  It is thickly furred and that makes it possible for them to use their tails as a kind of a muffler, wrapping it around their bodies for extra warmth (as mentioned above).  The long tail is also useful for maintaining balance in the steep, rocky terrain that snow leopards like. 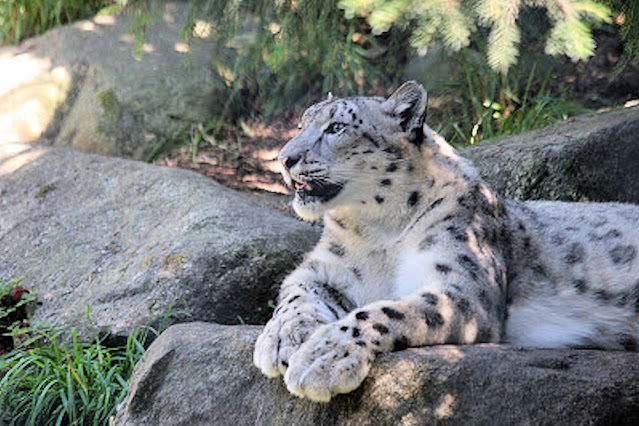 There is a very interesting YouTube on this beautiful animal at this link.  And another here.
I enjoyed learning more about the amazingly beautiful Snow Leopard.  I hope you have too.  I will never see one in the wild (hopefully in my next lifetime if the world can keep them going).  I still consider it to have been an incredible gift and am so grateful that I actually saw one with my own eyes.