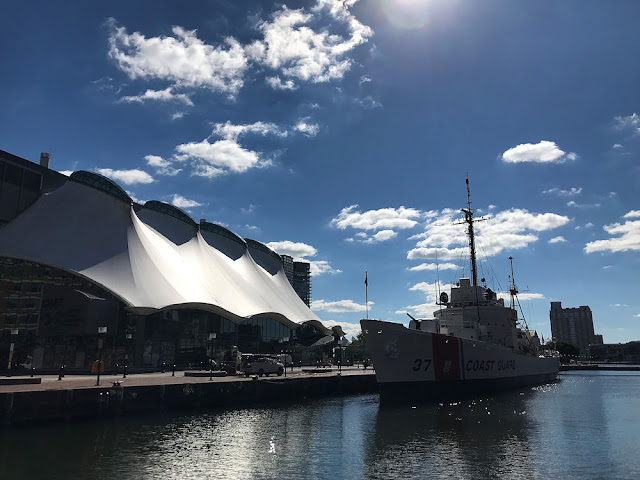 Last Friday we decided to take a trip to Baltimore, Maryland.  Even though we have been into the city a few times, it has been at least 10 years since we visited Baltimore Aquarium, our primary destination.  The sun was directly in front of us and barely seen is the Coast Guard ship in the above photo, which is a permanent fixture.  I learned it was decommissioned in 1986, and has served as a museum ship in the Inner Harbor of Baltimore, Maryland ever since.  She was designated a National Historic Landmark in 1988. 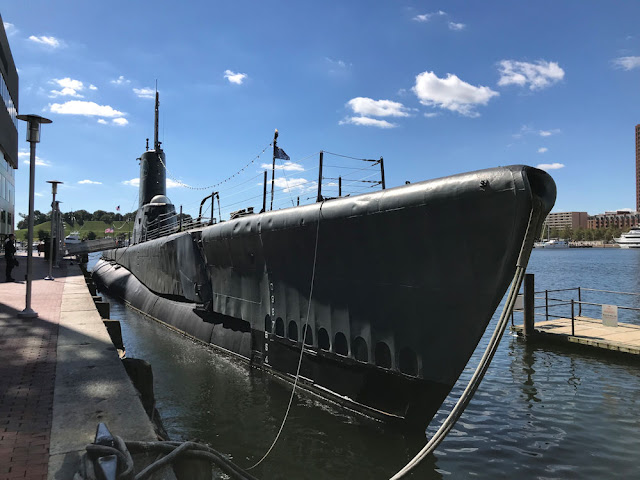 In addition to the Coast Guard ship there is a submarine.  It is the USS Torsk (SS-423) and, just like the previous ship, is part of the historic fleet on display in Baltimore.  It is one of two Tench-class submarines still located in the United States.  More can be learned here. 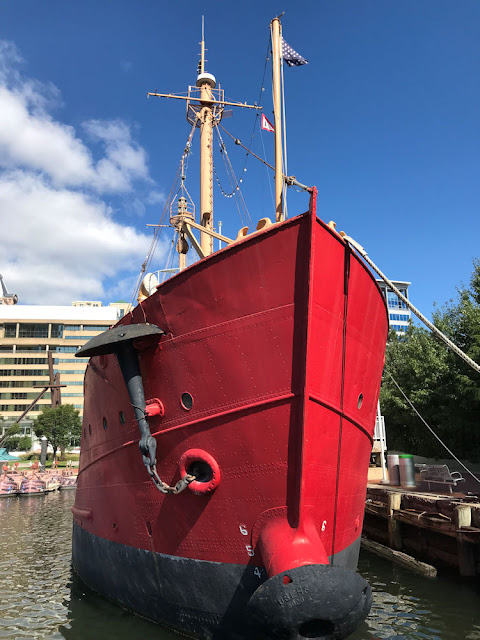 This is the Lightship Chesapeake built in the 1930s.  She spent her time at various posts near Cape Cod, at the mouth of the Chesapeake Bay, off of Delaware Bay and in Cape May.  It is owned by the National Park Service and is on a 25-year loan to Baltimore City, and operated by Historic Ships in Baltimore, Maryland.  Since 1820 several lightships have served at the Chesapeake lightship station, and all have been called Chesapeake. 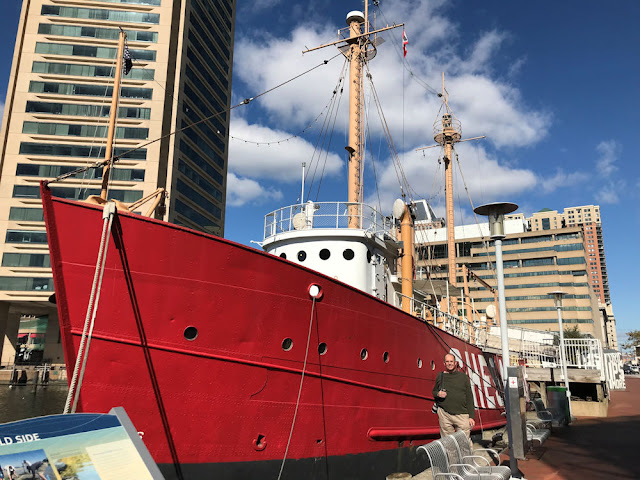 With ongoing help from volunteers, Lightship Chesapeake has been wonderfully restored.  You can go on board and see the crew's mess and staterooms.  It was designed to accommodate 10 seamen, five officers and one cook, but was rarely at full capacity because crewmembers rotated for shore leave.  The ship was equipped with mounted electric lamps, a foghorn and a fog bell to assist sailors.  For stabilization during extreme storms, it was designed with two 5,000-pound (2,300-kilogram) mushroom anchors. 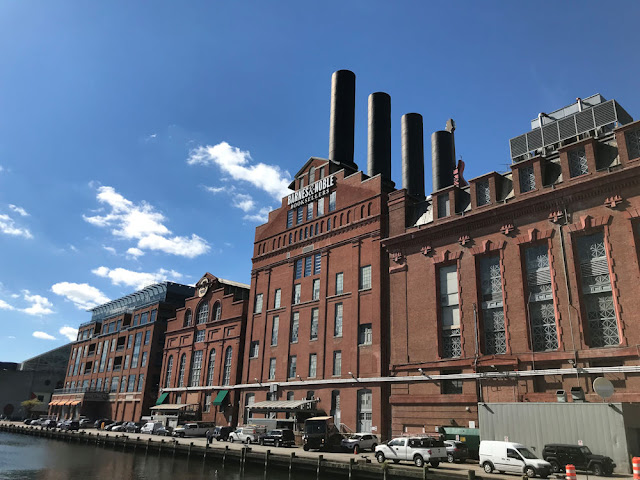 There are wonderful buildings in the area.  This is looking at the back of it, and was on the other side from where the coastguard ship was docked. It is the old coal-burning power generation station, originally built in 1900-05, for the old United Railways and Electric Company. Now it houses several restaurants, office spaces and specialty shops.  The front entrance is on the other side and we had lunch after looking around the aquarium, choosing Phillips Seafood Restaurant.  More on that later.  And now for the aquarium.  What an impressive place! 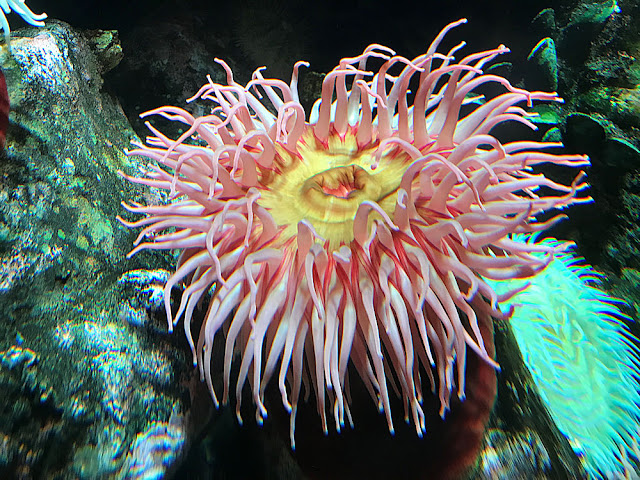 These are called Painted Anemones, also known as the mottled anemone or Christmas anemone.  Its scientific name is Ticina crassicornis. 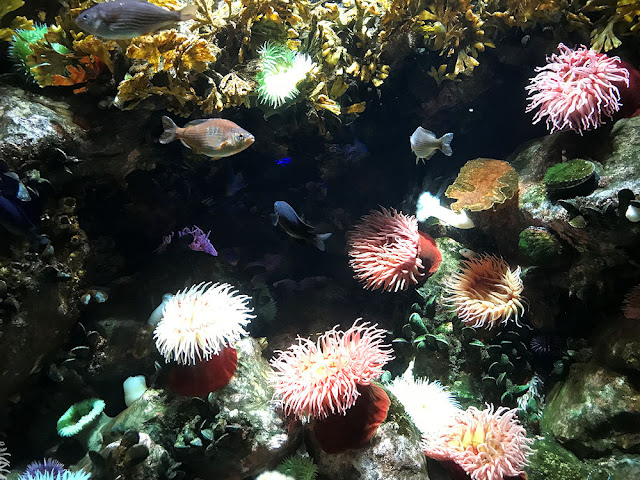 Its habitat includes a large portion of the coastal areas in the northern hemisphere, mainly polar regions.  It lives a solitary life for up to 80 years. 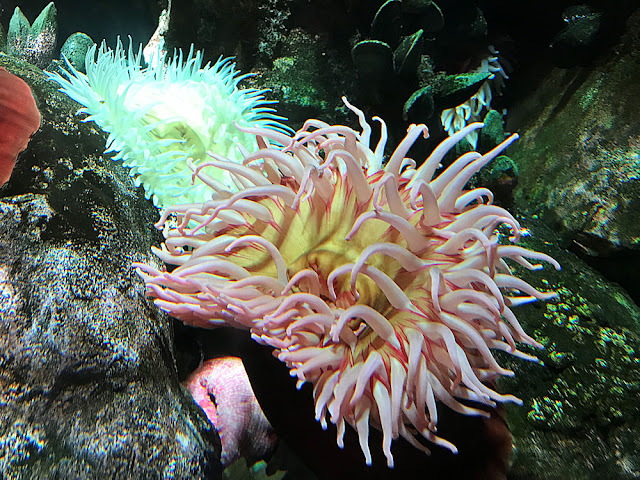 Its stinging nettles paralyze crabs, muscles and fish that wander too close.  Then the tentacles guide its helpless prey into its open mouth.
An amazing creature, and talking about amazing creatures, this is our friend from yesterday's post.  It is a Moray Eel. 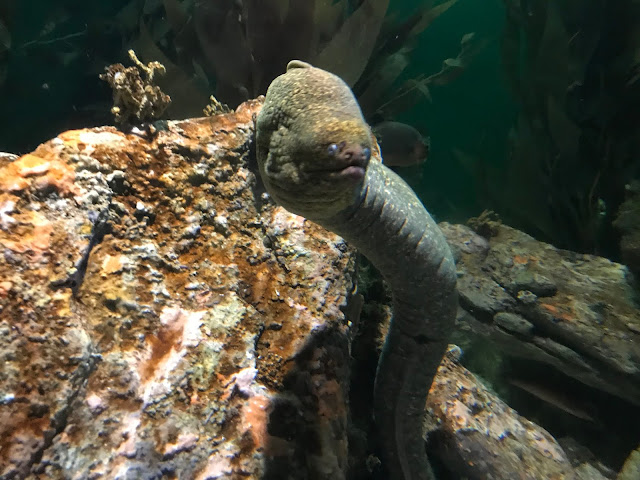 Moray eels (Muraenidae) are a family of eels whose members are found worldwide.  Approximately 200 species in 15 genera are almost exclusively marine, but several species are regularly seen in brackish water and a few are found in fresh water.  I found my info on Wikipedia.  Always fascinating to learn something new. 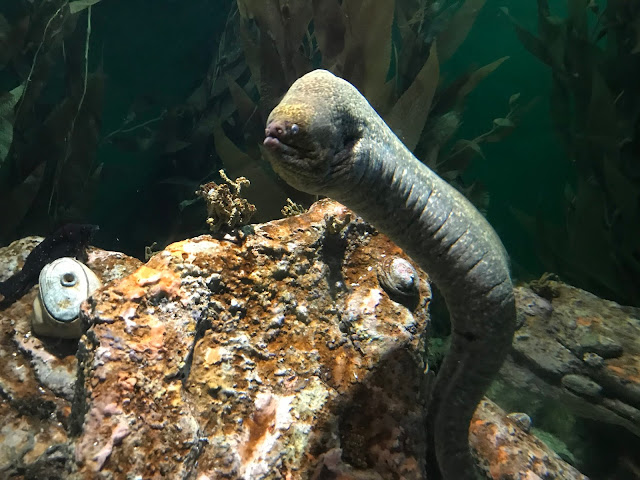 This is the first time we have actually seen one in real life.  We noticed its head at first and thought it a regular sized fish, and as he slowly ascended out of the hole in its rock, we found it incredibly eerie, especially as our surroundings were so dark.  Fascinating but eerie and very cool. 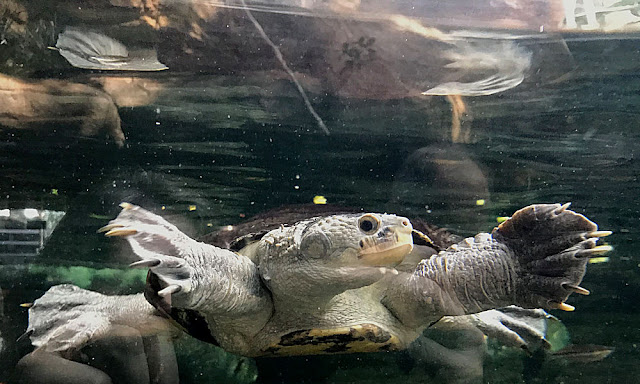 There were other cool creatures, like this turtle.  Look at those claws?  I am trying to find out what kind he is.  We came across him at the beginning of our visit, before I thought about taking photos of their information at the side of each tank. My search online hasn't found anything exactly identical. 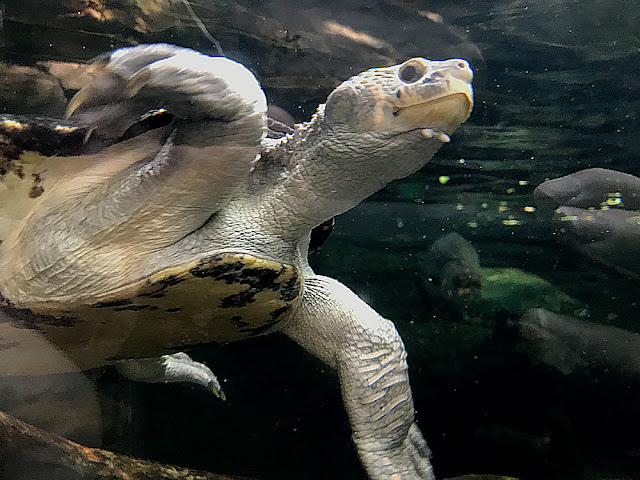 The following fish is an Australian lungfish (Noeceratodus forsteri).  It grows up to 4.9 ft (1.5 m).  These primitive fish have a lung-like swim bladder that allows them to switch to air breathing.  This helps them to survive the low oxygen conditions of drying pools in drought conditions. 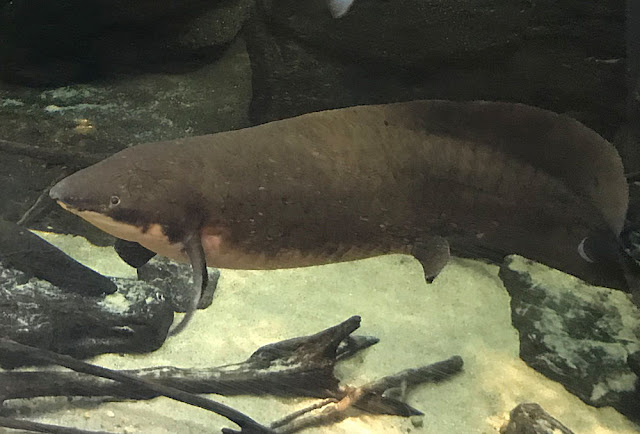 There were lessons to learn about our environment all over the aquarium, and how we need to protect it. This mural was floor to ceiling. 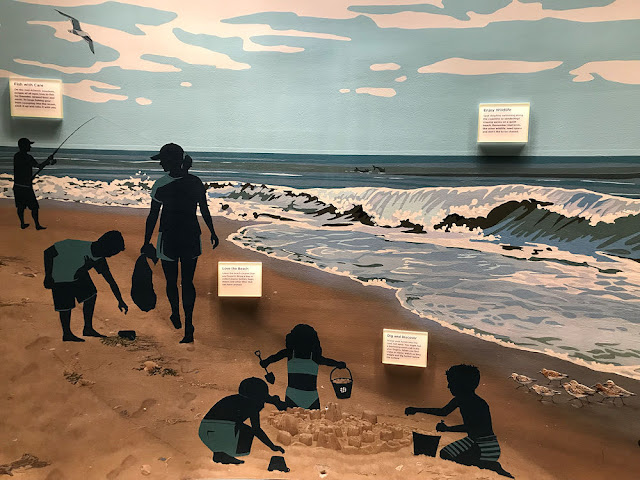 Each note by a figure had things we should do when we go to the beach. 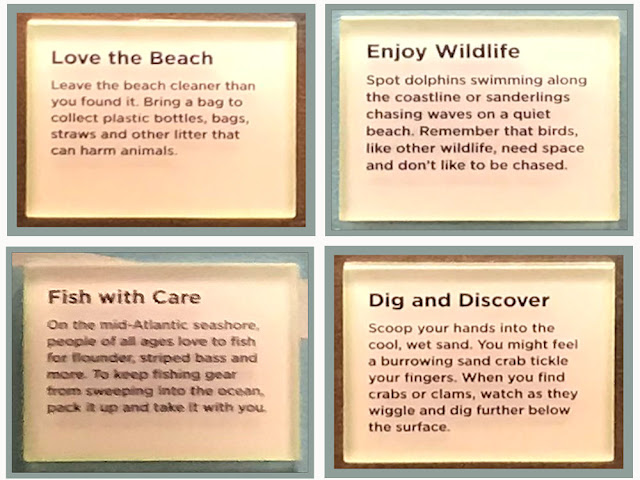 This collage of background lit photographs was in another darkened area coming out of one of the exhibits. 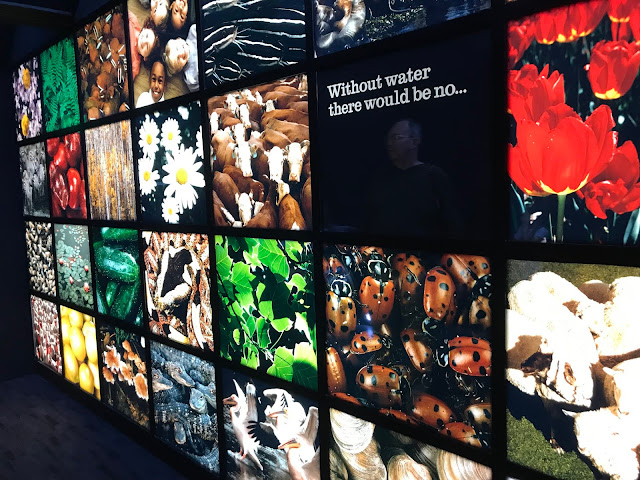 And just for fun I took a video of Gregg as he descended in front of me.

Part 2 of our trip to Baltimore Aquarium will be on Tuesday.
Posted by DeniseinVA at 2:30 AM