MORE FROM THE ELIZABETHAN GARDENS IN MANTEO, NORTH CAROLINA

I have a doozy of a cold so if your comment is late in appearing, it is because I have the pace of a snail 🐌 right now. Thank you all for visiting and thank you everyone who leaves a comment.  I probably won’t be posting again until Monday. 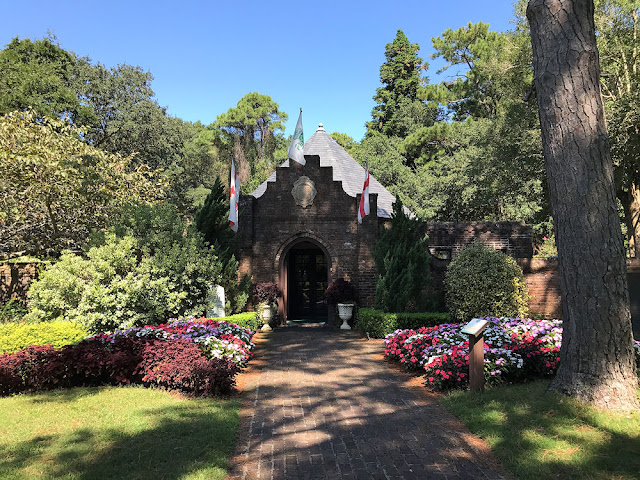 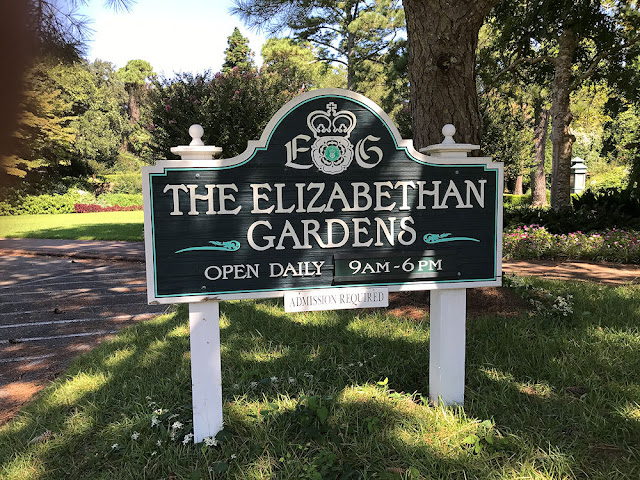 Right outside the gift shop/entrance there was a very large selection of garden ornaments.  I would have enjoyed taking a few of these home but managed to keep myself in check.  We are downsizing and trying not to add anything else right now. 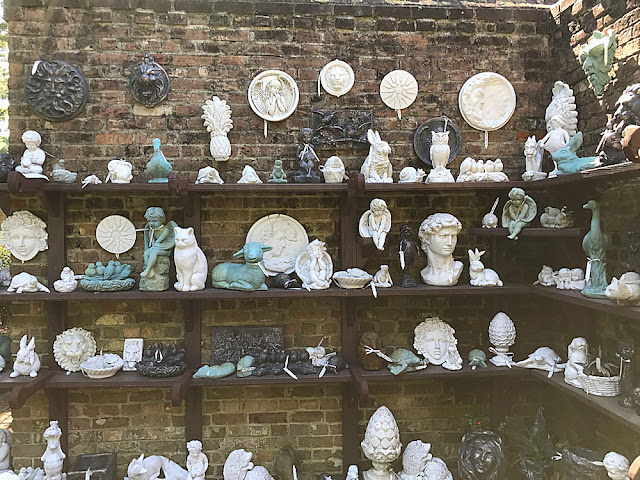 They were fun to look at though. 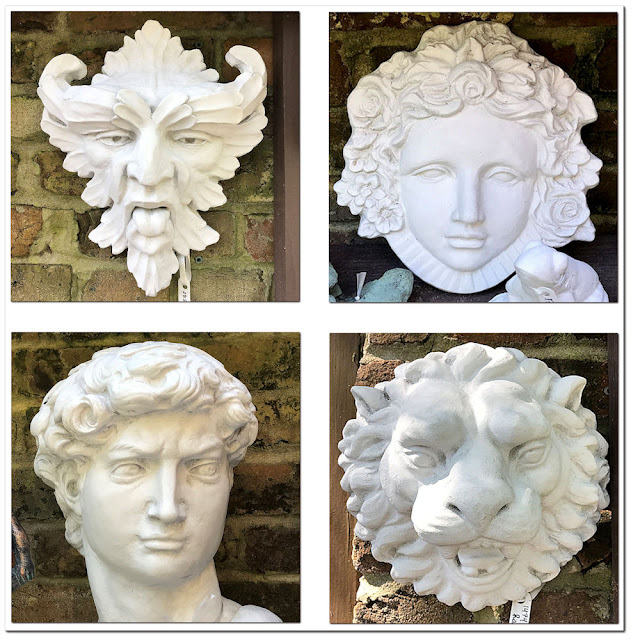 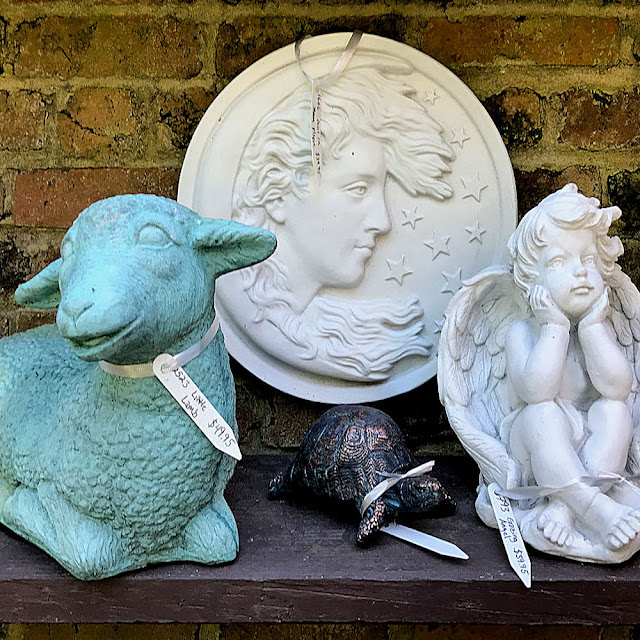 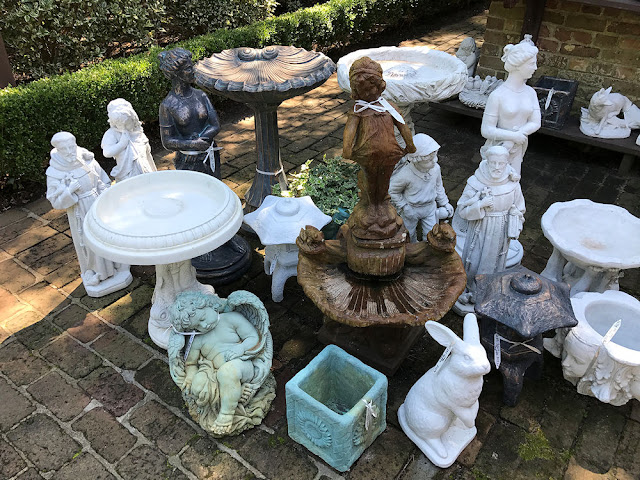 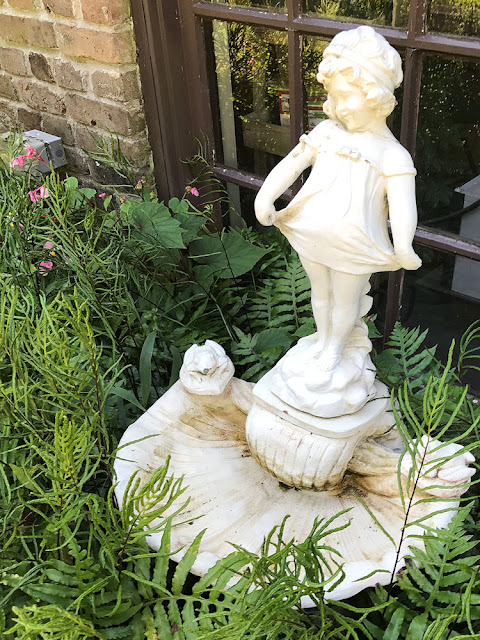 So, I tore myself away from all the garden goodies and started to explore. 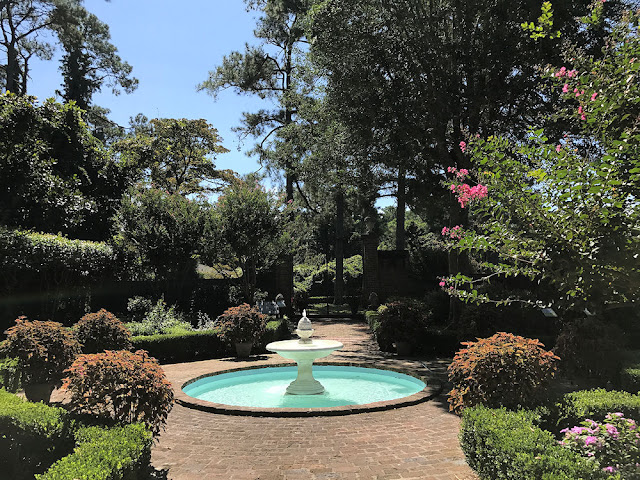 These beautiful gardens can be found within the Fort Raleigh National Historic Site, on 10 acres next to the  Roanoke Sound.  There are hundreds of native plants, and many others from around the world.  We didn't see any wildlife apart from a few squirrels, but it is home to a variety of birds and animals. 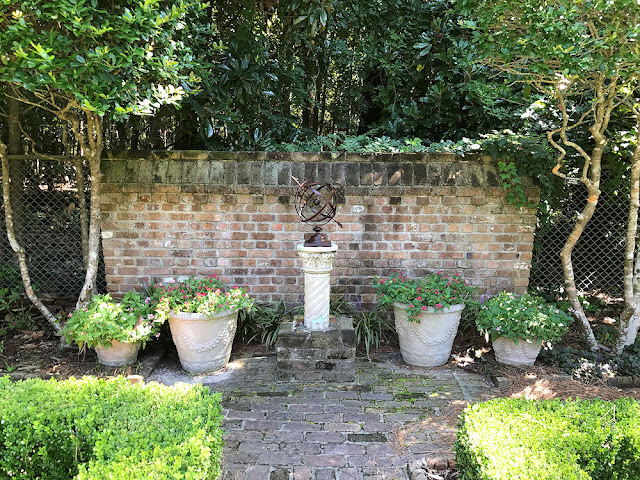 The Elizabethan Gardens are only yards away from the original homes of the 1580's Lost Colonists.  In the photo below is the building that contains the gift shop where we bought our tickets. 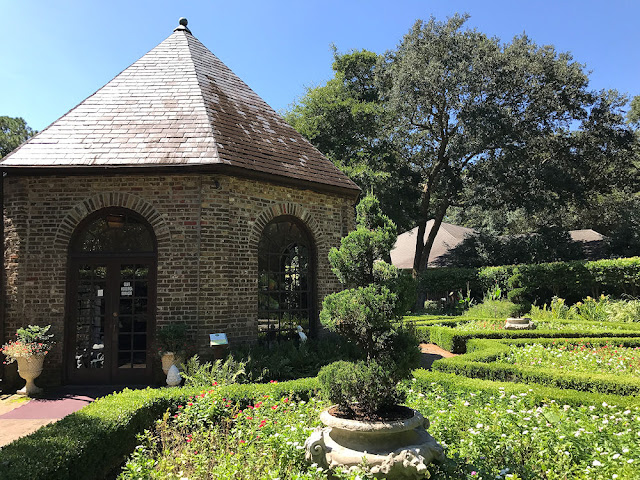 The following photo showing the iron gates were once placed at the French Embassy in Washington DC, and they gave them to the garden as a gift. 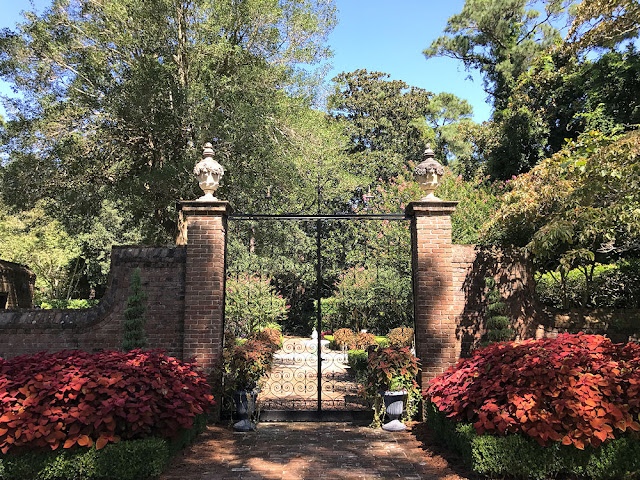 We came across a statue of Virginia Dare.  The original sculptor's vision carved her as an adult, with fishing nets draped around her waist.  He saw in his mind-eye, what he believed she would look like had she grown up on Roanoke Island. 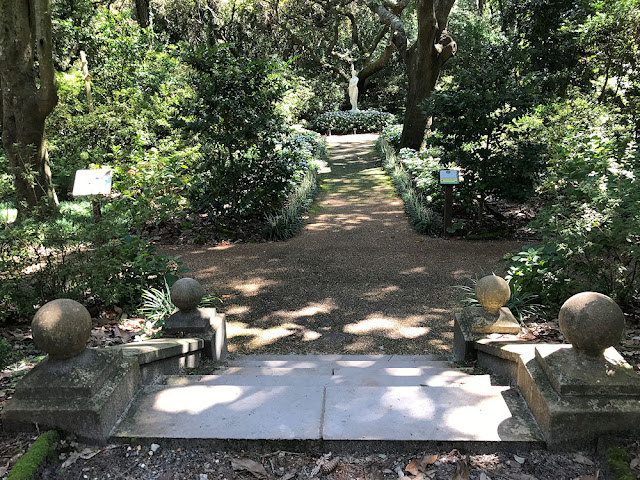 Virginia Dare was the first baby born to the colonists in the New World, and was only an infant when she and the other colonists disappeared.  (There is a very interesting history here.  And there is also an urban legend of Virginia Dare and the White Doe here.  As legends often are, it is a rather sad and fanciful tale.) 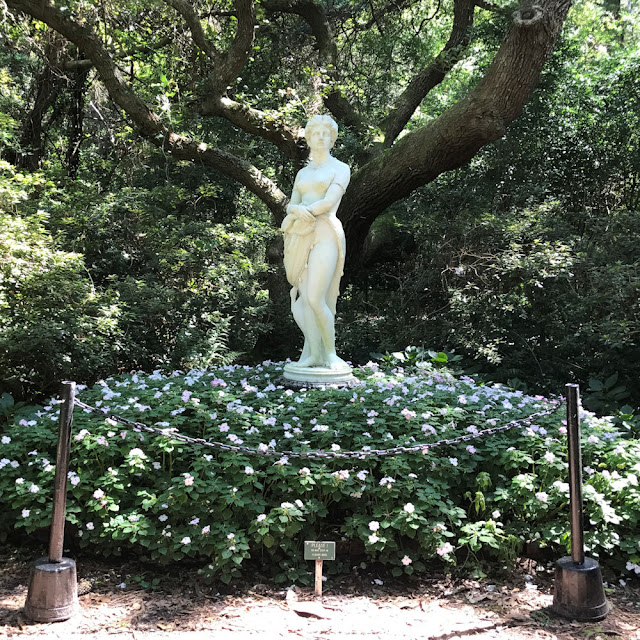 This statue itself has an interesting history as it was carved in 1859 in Rome and was eventually donated to the gardens.  First, however, it survived a Spanish shipwreck, was a controversial display in the Raleigh State Hall of History, and then had a long stay with the Pulitzer Prize winning playwright, and original author of the Lost Colony play, Paul Green.  There is a popular belief that Virginia Dare survived and was assimilated into the local Native American culture, that maybe others were too. 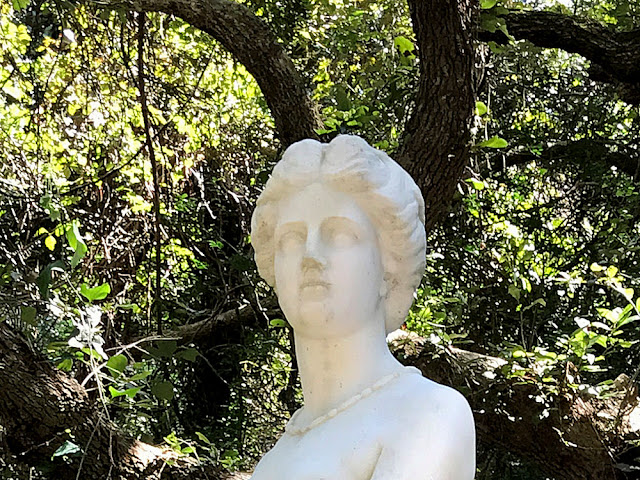 The Garden itself was officially opened to the public on August 18th, 1960, on what would have been Virginia Dare's 373rd birthday. 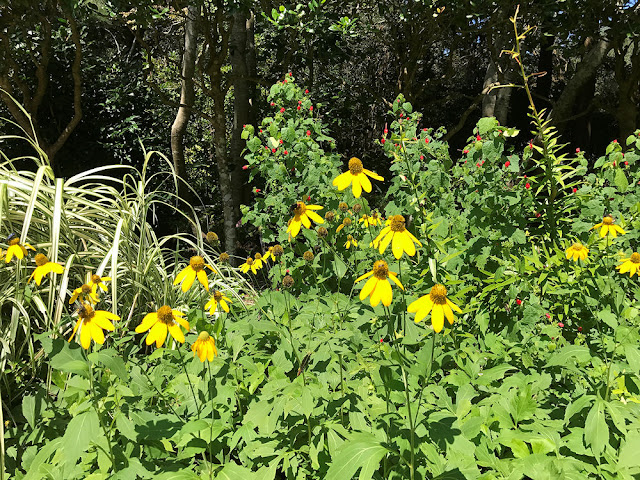 There were a lot of nooks and crannies to find, and more flowers to share, but I will leave those until next time. 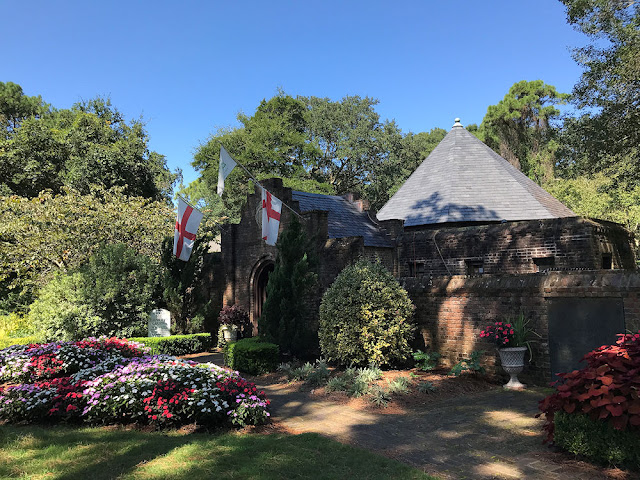 If you would like to see my other posts from the garden, you can click on the label below this post that reads, "The Elizabethan Garden_Manteo_NC.” 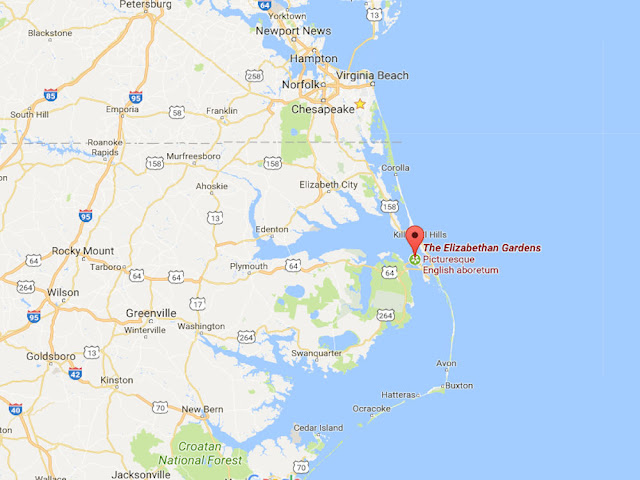 I have also included two maps of the area and where it can be located. 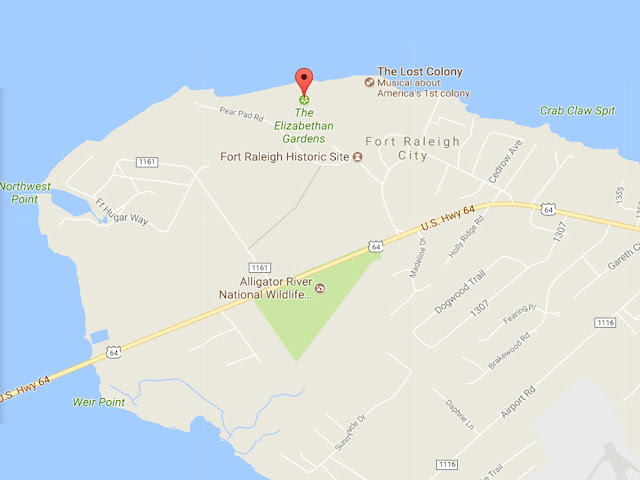