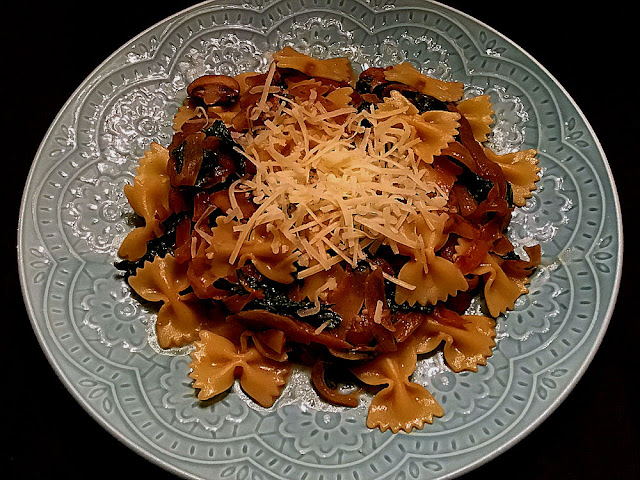 Today's recipe came from Julia who hosts Julia's Album. You can see the original here.  I highly recommend visiting Julia's recipe to see the very interesting information and helpful tips she shares. Plus, I want to make more of her tantalizing recipes.  We gave this a 10 out of 10, most definitely a favorite! 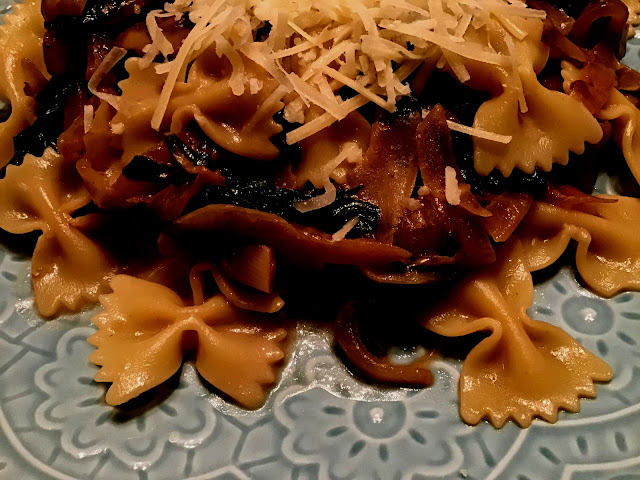 Add sliced onions and cook on high heat for about 10 minutes, constantly stirring with the spatula. The onions should be starting to brown.

Reduce heat to medium and continue cooking the onions for 10 more minutes.  Keep stirring so that onions don't burn.  Add a pinch of salt over onions.

For another 10 minutes continue to cook on medium or low heat.  Stir occasionally so that the onions don't burn and stick to the bottom of the pan.

The onions should have cooked for 30 minutes.

Remove skillet from the heat and sprinkle onions with a splash of balsamic vinegar to deglaze the pan.

Using a spatula, stir the onions, scraping the bottom of the pan.  Make sure the onions are coated with the balsamic vinegar you have just used.

Remove these onions and put in a bowl or plate.  Set aside until needed.

Get a pot of water and put on a separate element.  Heat to boiling on high.  This will be for cooking the pasta. I used the back one opposite to what I am using, so that it was out of the way.  I always also turn the handles of my pots away from me, so that I don’t accidentally catch them with an arm.  I know I am preaching to the choir, so to speak, but this is for any new cooks out there.

Next step, the mushrooms and spinach.

Sprinkle with a pinch of salt.

Cook mushrooms for about 5 minutes, stirring occasionally until mushrooms are soft.

If the water is boiling at this point, cook the farfalle  pasta according to package directions.  Ours said ten minutes for al dente but we added an extra two minutes to get it to our taste.  It was still al dente.

When the pasta is cooked, drain thoroughly in a collander.  Put in a bowl and set aside.

Back to the skillet, add the fresh spinach to the mushrooms.  Stir on low heat, just until spinach starts to wilt.

Add half-and-half to the mushroom and spinach mixture and bring to a quick boil. Immediately reduce to a simmer.

Keep stirring on simmer until the cheese melts, which happened almost immediately for us.

Add cooked and drained farfalle pasta to the creamy sauce. Stir on low heat for a couple of minutes to reheat, and to evenly distribute.

Serve with additional shredded Parmesan cheese sprinkled on the top.

Julia's useful notes can be read in the original recipe.

I had no half and half and no heavy cream, so used 1 cup whole milk.  It still tasted very creamy.

Also from Julia's Album, you can make caramelized onions ahead of time, refrigerate them in an air-tight container, and use within the next 3 days.  (I will do this next time, making this meal even easier to prepare.)

You can also freeze caramelized onions for up to 2 months and thaw them whenever you need them.

I also enjoyed our host's information on this pasta which reads as follows:

"Farfalle is a bow-tie shaped Italian pasta. Farfalle pasta can also be described as butterfly-shaped pasta. In fact, "farfalle" means "butterflies" in Italian.

Farfalle dates back to the 16th century in Lombardia and Emilia-Romagna Regions in Northern Italy.

Farfalle is often used with cream sauces and in tomato-based sauces.  It is also popular in salads."

If you prefer to cut and paste the recipe, I have left the whole address below.

Very happy with this. We liked that it was meatless, which we are trying more of lately.  It would go well with chicken or seafood, but it was such a comforting and filling meal, we didn't miss it.
There are also leftovers for tomorrow.
Thank you Julia's Album for a delicious meal which has gone into our make-again folder.
Thanks for looking, and
have a great week! 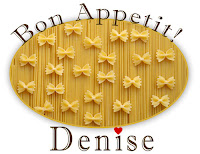