I have just eaten breakfast.  On a weekday I usually have a bowl of steel cut oatmeal, with a tablespoon of dried chopped dates, a tablespoon of chopped pecans or walnuts, sliced banana (not this morning as I need to buy them on the next shopping trip), or another piece of fruit, and topped with half a cup of oat milk.  On the weekends we splurge a little.  Something with eggs (poached eggs on toast is a favorite with both of us). What's your favorite breakfast?  I am always looking for ideas.  Do you have time for breakfast?   Many of us are so busy that it's hard to fit it in. 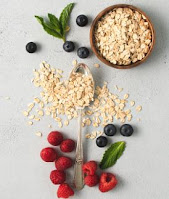 I had a lot of photos in our camera that I hadn't downloaded in a while.  These photos are a variety over the last couple of months. 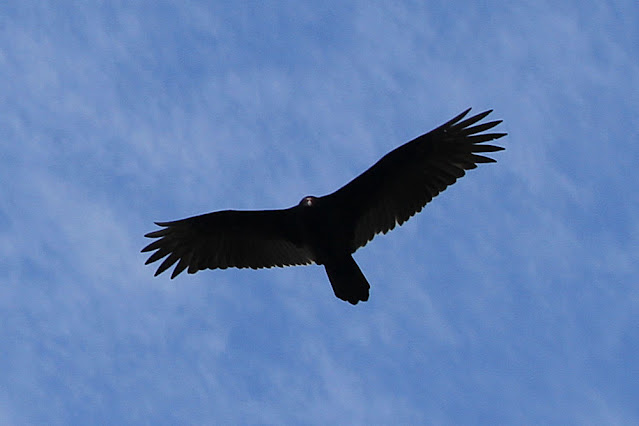 This Turkey Vulture was at Green Spring Gardens at the beginning of December.  Gregg took the photo.   I liked the dark contrast of the bird with that pretty blue sky. 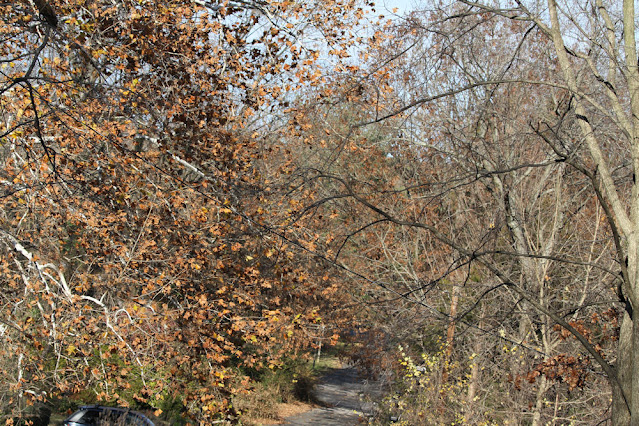 Another of his when it got very breezy, and the leaves were falling like rain. 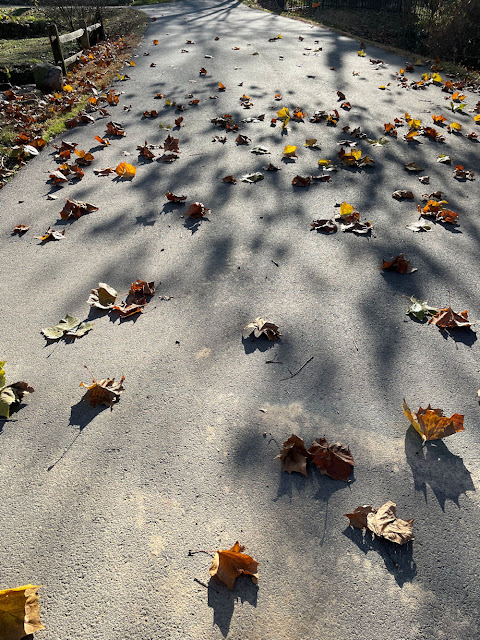 It was beautiful!  And some of the leaves were the size of dinner plates. 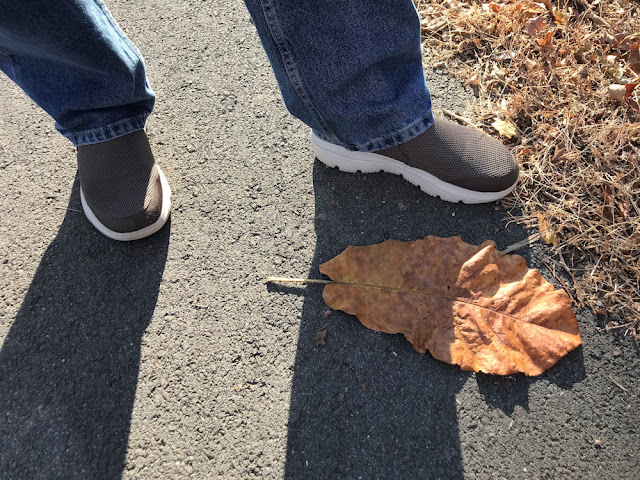 Gregg's foot is next to a magnolia leaf. 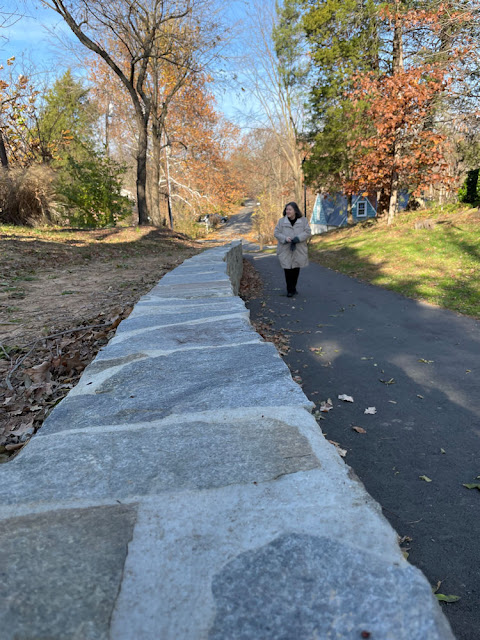 Gregg likes to take candid photos.  Here's one of me walking up the hill.  We only visited the pond that day. 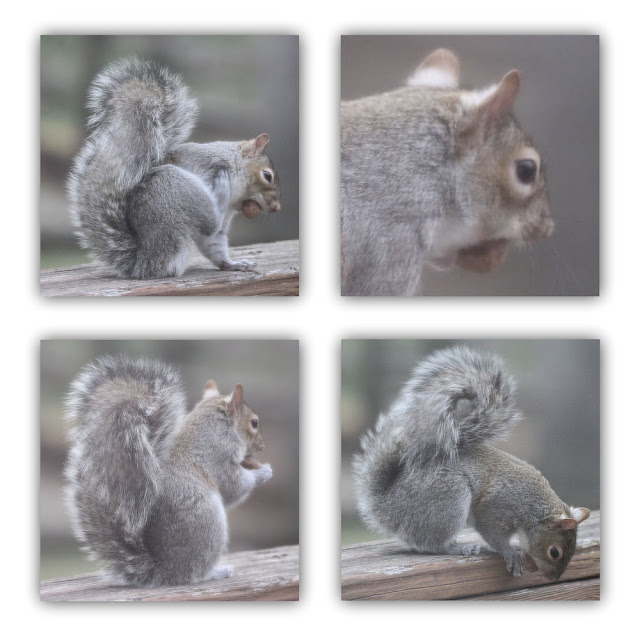 I took the photos in the squirrel collage with our other camera, not the trail cam.  I thought you might like to see the one I use (below).  I get a lot of enjoyment out of it and position it where I put the seeds.  You can see it on Amazon here. There are many to choose from, depending on what you are looking for.
Added note: Ginny's of Let Your Light Shine told me in her comment that this camera is no longer showing.  Thankfully there are many others to choose from.  Thank you for letting me know Ginny! 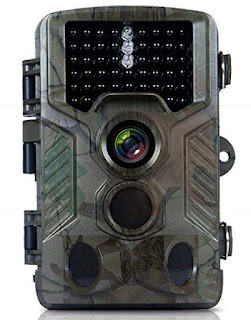 Lately I have been thinking of buying an additional cam, to put on one of the trees on ground level, to see what night animals we might get.  I was toying with the idea of getting one with a wifi.  The cam I have now is described as: "Flagpower Trail Camera 16MP 1080P Hunting Game Camera with Night Vision Motion Activated IP66 Waterproof 120 Detecting Range Motion Activated Night Vision 2.4" LCD IR LEDs 32 GB Memory Card."

Everything stops for birds.  Whatever I might be doing inside, when I see furry or feathered friends, I stop and grab the camera.  By the time I'm finished I have forgotten what I was doing originally, and usually put the kettle on for a cup of tea.  I sit down and watch the birds for a while, and after I have finished with my tea, I remember what I was doing and start again from there.  This is how she rolls these days!  I have about ten cups of tea during the afternoon and yes, I am joking.  Above you can see two Goldfinches and a house finch.  These were taken when the weather was warmer a couple of months back. 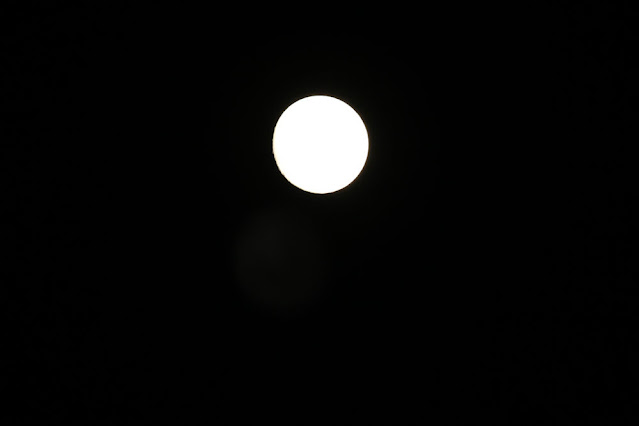 A few weeks' ago, my sister-in-law let us know that the International Space Station would be doing a pass over the East Coast.  I didn't think I had a hope of seeing it, my eyes not being very sharp, but I said why not?  The weather cooperated and the skies were clear.  I strained my eyes and after seeing some dots said, well, maybe that was it!  But truthfully there were so many planes coming into Washington-Dulles Airport, it's anyone's guess.  I did take a moon shot which came out so-so, a bit washed out.  I am always very impressed with Ginny's Let Your Light Shine moonshots, and a week later I took another that pleased me more.  This was on a different night, and the stars were aligned, so the old saying goes.  I should get more practice when the moon is fuller.  I used the one below for my post yesterday, with the saying. 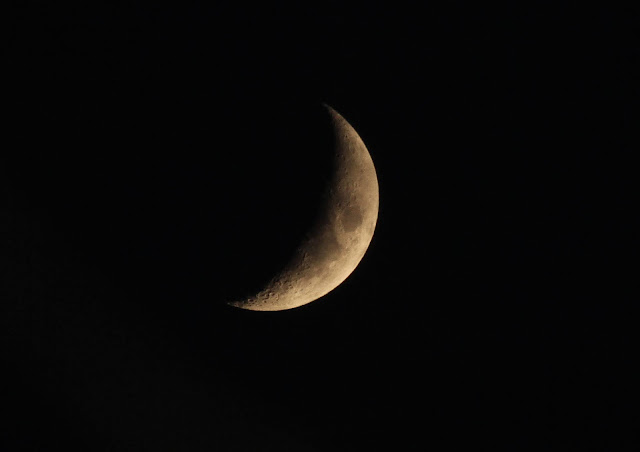 The next photo is of a male Downy Woodpecker that stayed on one of the rails out back, in that position, for 10 minutes.  My thought was that there may have been a hawk flying around.  There were no smaller birds in sight.  I haven't actually seen a hawk in months. 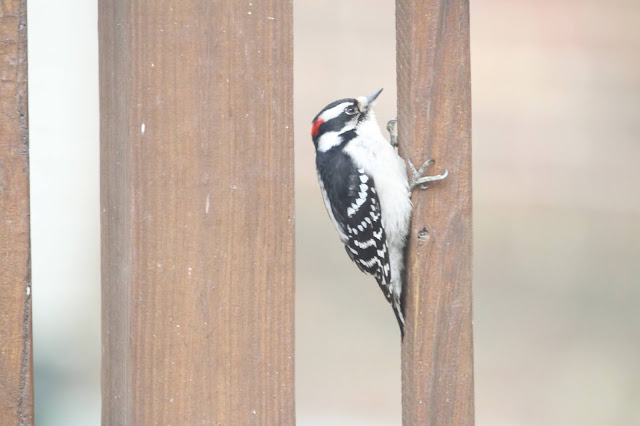 The other thing that has been happening around here in bird-land, is that the Mourning Doves have been flying into the patio door window.  This is a new thing.  All bounced back off in flight and none landed on the deck.  At first I couldn't figure out what the marks were on the glass.  When I looked closer, I could see the outline of a few feathers on each side where a bird's wings would have been, their oils had transferred.  I washed the window and the next day there was the same outline.  When I was sitting in my spot looking at the doves lined up on the deck, I actually saw one fly towards the glass with a bit of a thump, but it flew off again immediately and didn't seem the worse for wear.  I also put a small Christmas tree next to the door.  Could they try to be landing in that?  I suppose anything is possible!  There are decals on the shopping list! 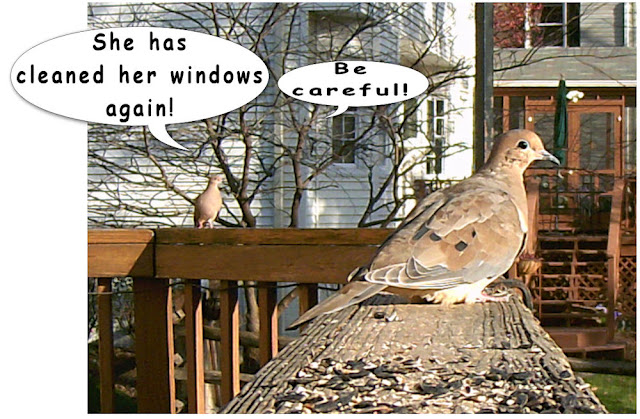 That's it for today's post and thanks so much for stopping by.  Enjoy your day! 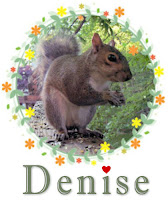