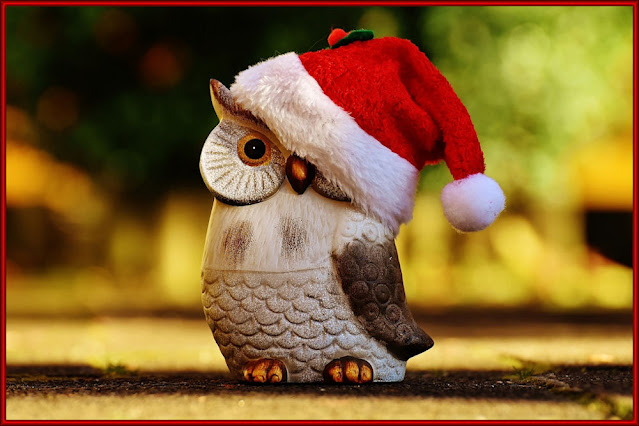 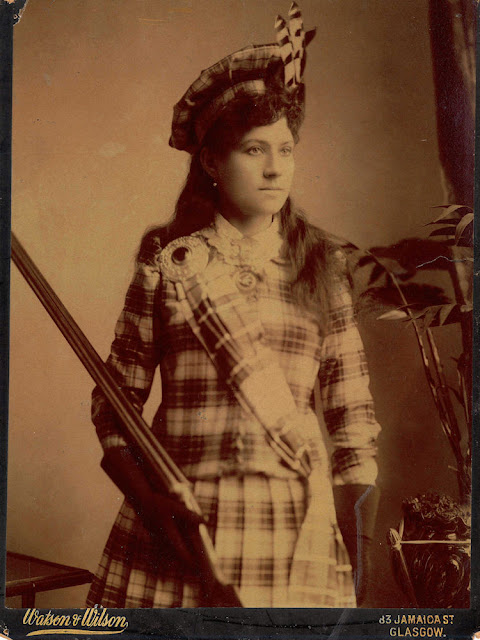 Annie Oakley, as many of you already know, was an American sharpshooter and trick-shot specialist, who toured with Buffalo Bill's Wild West Show.

On her first visit to Glasgow, Scotland in 1891, she had a special tartan outfit made and, as the show was in town over Christmas, she had herself photographed wearing it, at the Watson & Wilson Studios, in Jamaica Street.  She liked this photo so much that she had the photo turned into her own Christmas Card, sending it all over the world.  This card is acknowledged to be the world's first photographic Christmas Card.

My information came from this link, and Annie's biography can be read here.

And the history of Christmas cards can be found here.

Question: Which country started the tradition of putting up a Christmas tree?

Germany is credited with starting the Christmas tree tradition as we now know it in the 16th century, when devout Christians brought decorated trees into their homes. Some built Christmas pyramids of wood and decorated them with evergreens and candles if wood was scarce. It is a widely held belief that Martin Luther, the 16th-century Protestant reformer, first added lighted candles to a tree. Walking toward his home one winter evening, composing a sermon, he was awed by the brilliance of stars twinkling amidst evergreens. To recapture the scene for his family, he erected a tree in the main room and wired its branches with lighted candles.

More information about the origins of the Christmas Tree can be found here.

Answer: a kitten or kit

Rabbits can have up to 15 babies, but the average litter size is 7. The female rabbit is called a doe, giving birth is called kindling and baby rabbits are called kittens. Rabbit kits are born with their eyes and ears sealed shut, and completely furless.

Other names for baby animals?

A baby antelope is called a calf

A baby beaver is called a kit

A baby coyote is called a puppy

A baby eel is called an elver

A baby fish is called a fry

A baby pigeon is called a squab or a squeaker

A baby rat is called a pup

A baby spider is called a spiderling

A baby zebra is called a foal

Question: What is the smallest country in the world?

Vatican City is officially called the Vatican City State, an independent city state and enclave located within Rome, Italy. It became independent from Italy with the Lateran Treaty in 1929, and it is a distinct territory under "full ownership, exclusive dominion, and sovereign authority and jurisdiction" of the Holy See.  It covers an area of 49 hectares (121 acres), and is the smallest state in the world by both area and population, which is about 825, according to what I read on Wikipedia on 11-26-21.

That information and much more came from here.

According to Greek mythology, who was the first woman on earth?

In Greek mythology, Pandora was the first human woman created by Hephaestus on the instructions of Zeus.  Her other name - Anesidora - "she who sends up gifts" ('up' implying "from below" within the earth).  As Hesiod related it, each god cooperated by giving her unique gifts.

Pandora's box I have known of since childhood, when I first became interested in Greek mythology, sometimes taught at school.  It is an artifact connected with the myth of Pandora in Hesiod's "Works and Days".  He reported that curiosity led her to open a container left in care of her husband, thus releasing physical and emotional curses upon mankind.  Stories are varied and have focused more on the contents than on Pandora herself.  "A present which seems valuable but which in reality is a curse."

Thanks so much for joining me today.  I hope you enjoyed the quiz.  Have a great weekend! 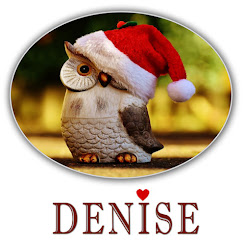 (The owls came from pixababy.com)
Posted by DeniseinVA at 12:00 AM