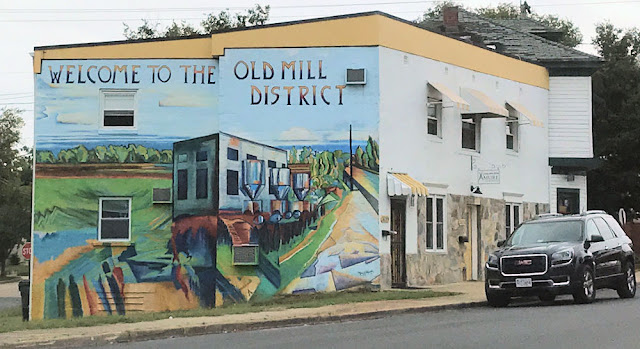 (You can click on any of the lettering in red, to read more information if interested.  The first few photos are places we saw not too long into our journey.) 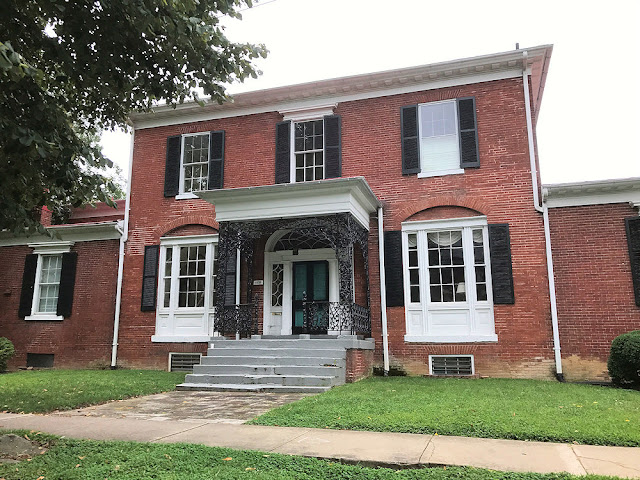 The morning started out with me leaving the house just before nine to get my hair cut.  Nothing like leaving things to the last minute, but I have been busy getting ready for the trip this past week, and forgot all about it.  I did not want to go on vacation without noggin being tidied up.  I was disappointed to find that my old hair-stylist had left, but the new lady was warm and friendly and gave me a great cut. I will be going back. 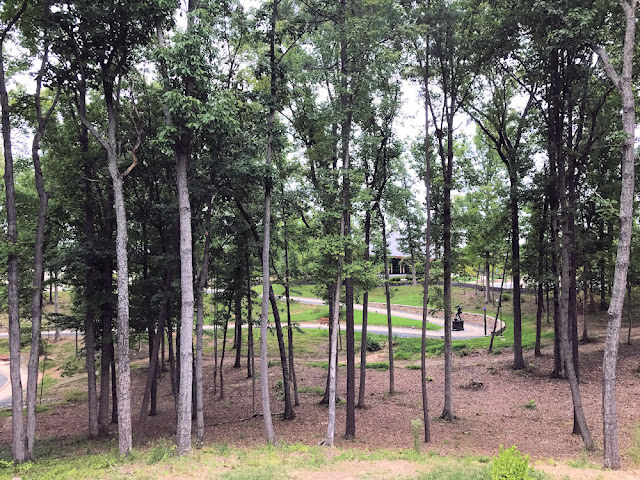 Now on to our trip.

We received an invite to a special celebration from a dear friend,  taking place in Corolla, North Carolina. This friend is also a very close friend of Gregg's sister, since their 1st Grade school days.  (I met this sweet lady when she was 15. Gregg and I hadn't been married for very long. I had only just come to the US.)  Gregg's sister and her husband rented a house in Corolla, and very kindly invited us to spend the whole week with them.  We had a wonderful time. 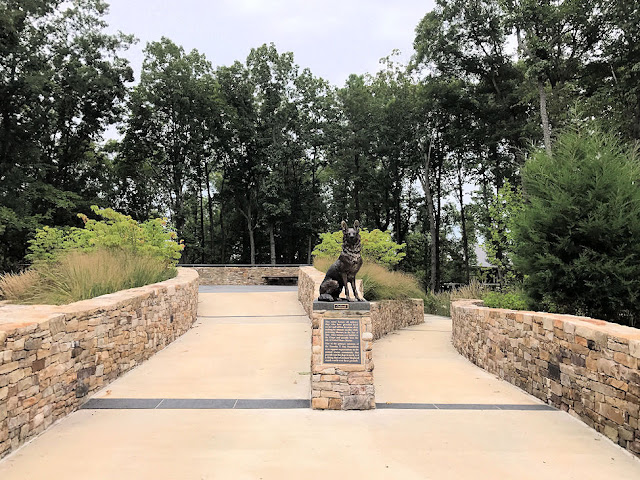 Not too long after we had started our journey, at around 12.45 p.m. we took a wrong turn getting off the freeway.  We will often take to the countryside when the traffic is horrendous. To double back we turned left into the entrance of the Marine Corps Museum in Quantico. We had to drive towards the museum to find a u-turn, but I noticed the statue of a dog not too far off the road.  I asked Gregg if we could stop for a quick look-see. It was at the Timothy T. Day Overlook. The dog statue I saw was called Caesar, a military dog, and a memorial to all the service dogs in the Marine Corps. 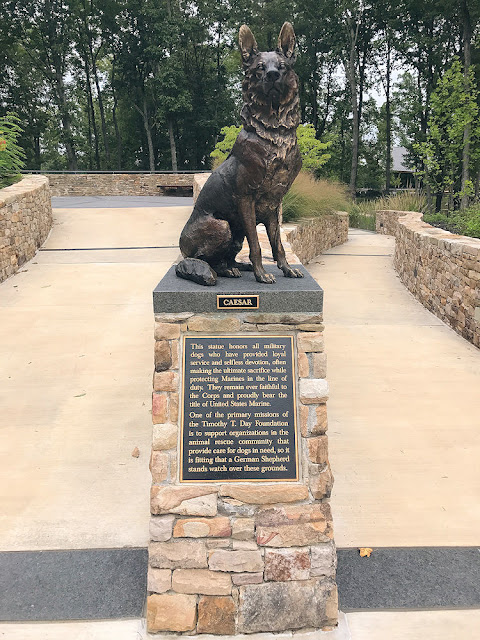 "This statue honors all military dogs who have provided loyal service and selfless devotion, often making the ultimate sacrifice while protecting Marines in the line of duty.  They remain ever faithful to the Corps and proudly bear the title of United States Marine. 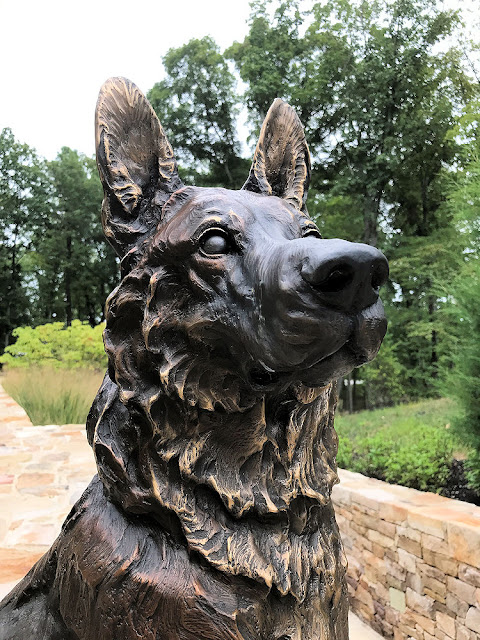 One of the primary missions of the Timothy T. Day Foundation is to support organizations in the animal rescue community that provide care for dogs in need, so it is fitting that a German Shepherd stands watch over these grounds." 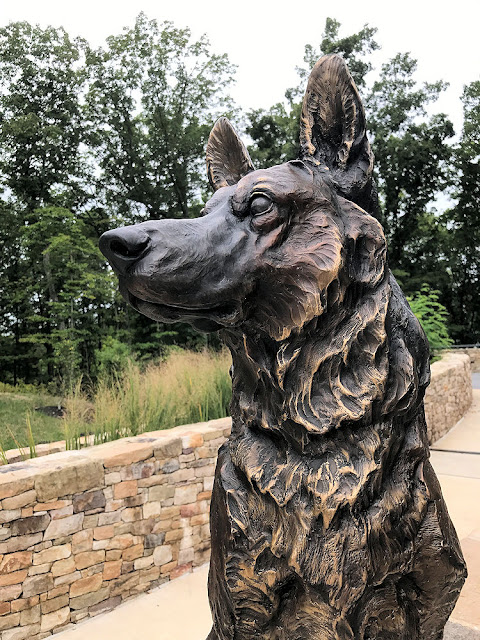 1:45 p.m. we stopped at Hornes Restaurant.  Anytime we are passing through this area when we journey south, we more often than not stop here. 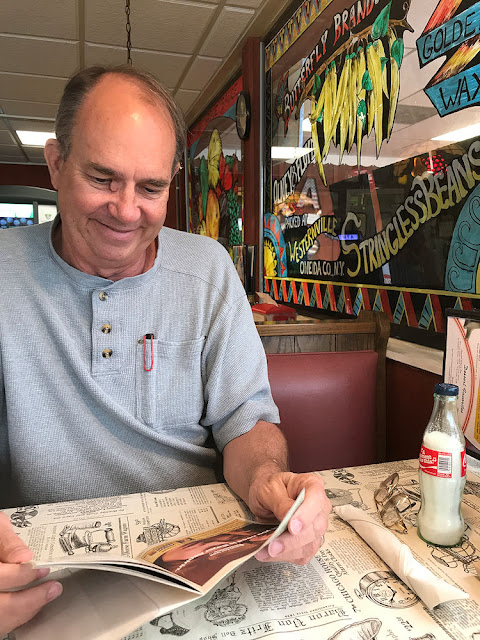 Our reading material while we waited for our food. 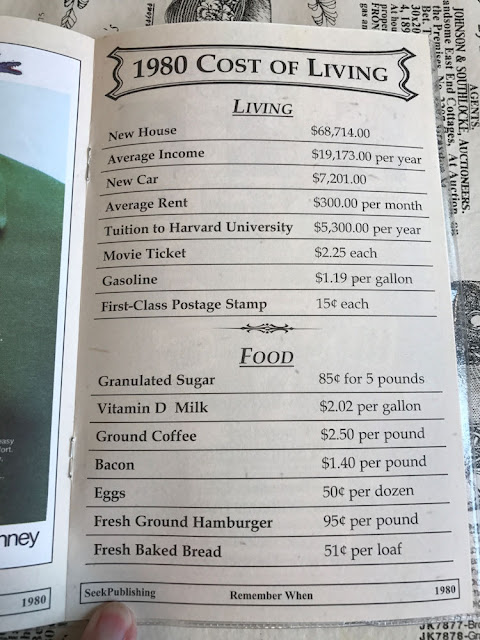 Gregg had a cheeseburger and  fries, and I had a BLT with fries. 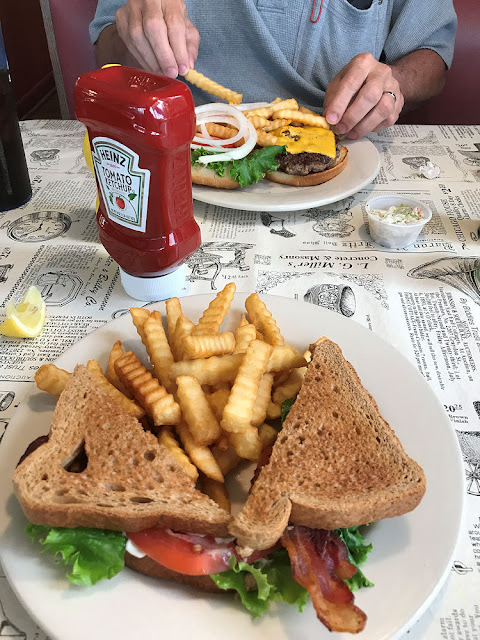 It was excellent and the lady who took our order was very nice. She kept calling me Sweetie.  Gregg reminded me yet again of a time when another nice lady called me Honey many, many years ago.  This time I didn't bat an eye at being called "Sweetie" and Gregg took note and couldn't resist a tease.

This is one of our family jokes/smiles, how 41 years ago, when I first came to America, I looked startled the first time someone called me "Honey".  "As you often tell me, it's a culture thing"  I told him at Hornes, and "I've come a long way baby!", that is until I ask for a glass of water.

"Pardon me?"  "A glass of 'wawter' please."  Blank stare.  One young lady who looked like she was 16, this not so long ago, had a panicky look on her face when she repeated her question two or three times.  She backed away nervously and asked me to wait a minute.  Next thing her boss appeared as she disappeared out of sight.  "What do you want?" said the boss.  "I would like a glass of 'water' please?"  "Warter?"  Nodding in the affirmative I watched as the light bulb went on and she started laughing. "She didn't understand you" she said, and a few minutes later she brought me my glass of water.

I try to remember to use my John Wayne American inflection on that one word but often forget - John was my Dad's hero by the way (he loved his John Wayne movies), and thank you Mr. Wayne from both of us.

This affected John Wayne accent also works with Siri, and still cracks Gregg up when we are driving along and I am talking to my phone, which probably gets me going even more.  She sure as hay does not understand me on a regular basis but Siri may be getting better as I don't have to do it quite as often.  Or maybe Siri is training me?  If you are English born you will understand.  If you are American born, I apoligize for murdering the American accent.  It's a culture thing, even after 41 years.  Well, enough of that subject.

We saw the historical marker where John Wilkes Booth met his end. He was hiding in a barn that was set on fire by Union troops.  He had another man with him and when given the chance to give up, the other man left the barn but Booth refused.  The sergeant in charge became a celebrity afterwards, and Booth thought he was going to be hailed as a hero after he assassinated President Lincoln.  Maybe he was in the South at that time. I need to ask my history buff (Gregg).

We have great conversations on the road, and a lot of it is all about the history of the places we pass by.  Gregg will tell me what he knows, and I will often learn more on line, about various towns we are passing through.  I read out loud so that we can both enjoy this new information.  It makes for an interesting ride.

The Booth markers are just a little ways from Horne's restaurant.  We overshot the pull-in and there was too much traffic to stop for a photo.  Next time!  We said we should go on a historical marker road trip. 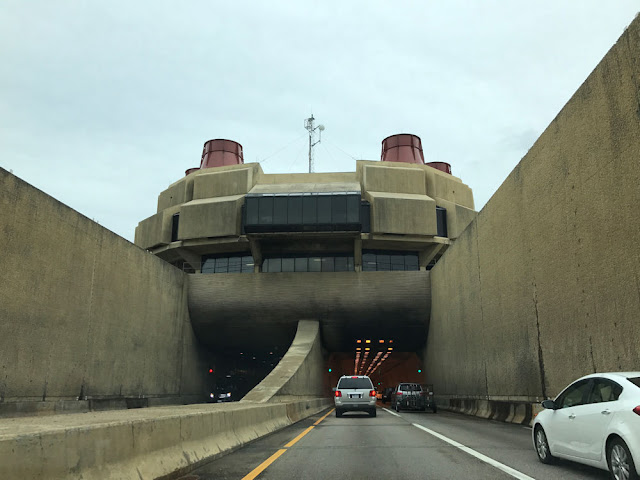 We were driving through the Monitor-Merrimac Tunnel in Hampton a couple of hours later.  It "is the 4.6 mile-long (7.4 km) Hampton Roads crossing for Interstate 664 in the southeastern portion of Virginia (USA).  It is a four-lane bridge-tunnel composed of bridges, trestles, man-made islands and tunnels under a portion of the Hampton Roads harbor, where the James, Nansemond and Elizabeth Rivers come together." according to a paragraph at this link where you can read more interesting info. 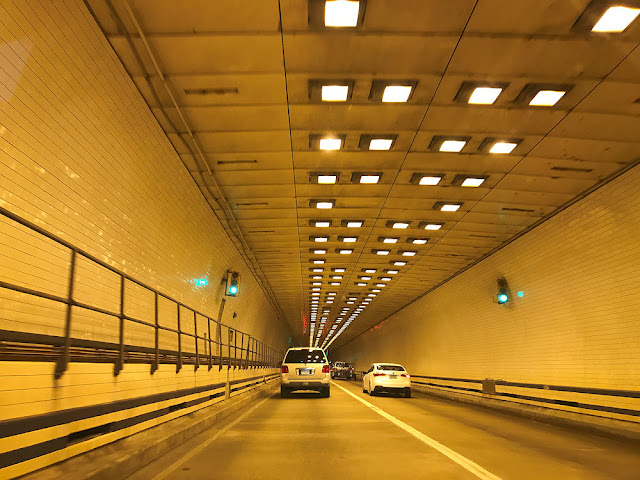 A while later we were east of the Great Dismal Swamp and saw long stretches of greenish covered water, and one witch had flown into a pine tree! 
A little early for Halloween.  Maybe it was either left over from last year, or a reminder to drive safely. There were lots of police patrolling the roads, and they had stopped several cars, but we kept cruise controls on, as well as "Waze".

The Waze phone app is great.  Travelers put in where the police are (slows people down which is a good thing, keeps the road safer and helps the police out in my humble opinion), also hazards pop up in the area, shows where vehicles are stopped on the side of the road, construction, that kind of thing.  It also tells you your speed and also the speed limit on the part of the road you are traveling on.

We've come a long way from "I Spy", though the old games are fun too, but new technology has moved us along and history is our main focus.

7.25 p.m  A good day traveling. It rained very lightly off and on. Heavy traffic in parts but managed to travel several miles on Rt 17, which was lovely.

We are staying the night in Elizabeth City in North Carolina.  Blackbeard ️used to sail these waters and Orville and Wilbur Wright stopped here for provisions on the way to the Outer Banks before their famous flight.  I thought that was very interesting. 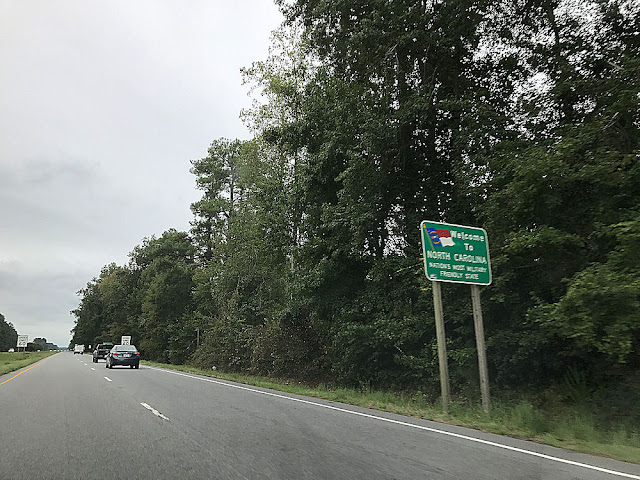 I took a photo of the sign as we entered North Carolina.  It came up fast and is a bit blurry but I like to get a record of each state we enter.

Gregg told me that 19 trillion gallons of rain fell during Hurricane Harvey and if you were to put that much water into the Great Lakes, the lakes would rise 11 inches.  (Now we have Hurricane Irma - those of you who are and have been in its path, you are very much in our thoughts.) 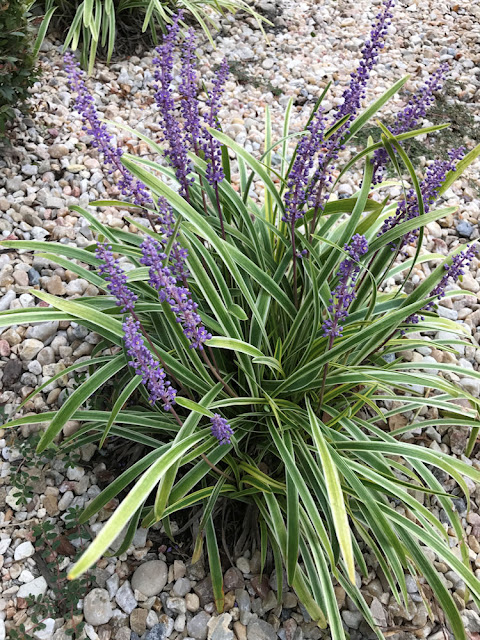 When I was getting out of the car I noticed these pretty flowers.  They were part of the hotel's landscaping.  I am forgetting the names of my flowers laterly.  I found similar but not exact ID's on line.

9.57 p.m. There was a thunderclap so loud I nearly fell out of  bed, when I was just dropping off to sleep.  I have never heard one that loud before.  My heart felt as though it jumped out of my chest.  It has been raining hard for some time now.   Hopefully it will have stopped by the time we get on the road tomorrow.