As this very interesting lady was in my December quiz questions and answers, I thought I would share an old post.  On the recommendation of a fellow traveler, we visited the Buffalo Bill Center of the West in Cody, Wyoming, in August-September 2013.

I purchased the postcard above in their museum gift shop.
Here are a few facts:
"Born Phoebe Ann Moses (or Mosey) on August 13th, 1860, in Darke County, Ohio, the woman who came to be known as Annie Oakley, developed her superb marksmanship as a teenager.  She earned money and helped her family by hunting game for a grocery store.  By the time she was 15 she was able to pay off her mother's mortgage. Also at 15 she won a shooting contest against experienced marksman Frank E. Butler, a top shooter and vaudeville performer.  They married in 1876.  When his partner fell ill, she was the replacement and took on the name Oakley.  She would later become a star attraction for Buffalo Bill's Wild West show for years, renowned for unparalleled shooting tricks, a revered global figure.
When she met Sitting Bull in 1884, he was so impressed with her manner and abilities, that he "adopted" her and bestowed upon her the additional name of "Watanya Cecelia" or "Little Sure Shot."
She and her husband joined Buffalo Bill's Wild West Show in 1885, which they toured with for more than a decade-and-a-half.  She received top billing and her husband worked as her manager and assisted Oakley with her stunning displays of marksmanship, such as shooting off the end of a cigarette held in her husband's lips, hitting the thin end of a playing card from 30 paces, and shooting distant targets while looking into a mirror, and more.
Annie entertained such royals as Queen Victoria and Kaiser Wilhelm II, and shot a cigarette out of his mouth.
In 1901 she was partially paralyzed in a railroad accident.  She recovered and continued to perform.
She retired with Butler in 1913 settling in Cambridge, Maryland, and adopted a dog Dave, who would become part of their later shows.
She was the top earner for the Wild West Show and along with additional exhibition work, she shared money with her extended family and gave donations to charities for orphans.  After her death it was discovered that she had given all her fortune away to these two.
During World War I, Annie volunteered to organize a regiment of female sharpshooters but her petition was ignored.  Instead, she helped to raise money for the Red Cross with exhibition work at army camps.
In her retirement Annie pursued such hobbies as hunting and fishing, and taught marksmanship to other women.  In the early 1920s Oakley and Butler were involved in a car accident in which they were both severely hurt, but she did manage to perform again for a time in 1924.
She passed away on November 3rd, 1926, in Greenville, Ohio of pernicious anaemia.  Her husband died soon after, when he was so heartbroken he stopped eating, and he too passed away on November 21st, 1926.
Photos taken at her exhibit.  Annie Oakley is standing on the right-hand side of the photo holding her rifle.  Click to enlarge for a better look.

One of her costumes inside a display case. 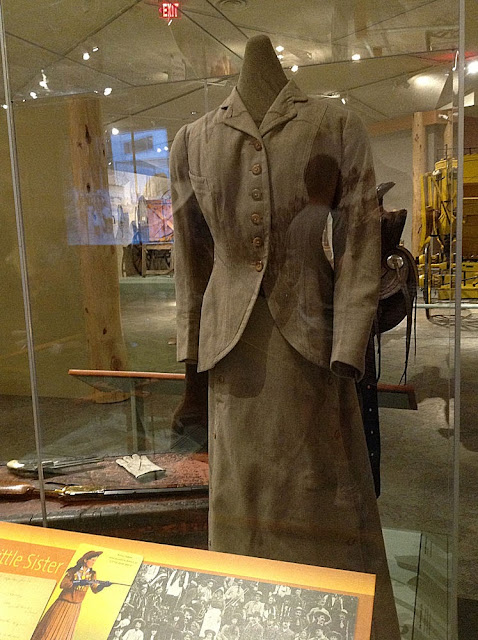 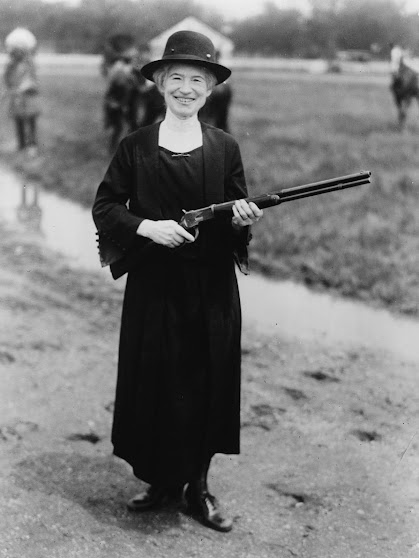 You can learn more if you click here.
Thanks for stopping by and enjoy your day. 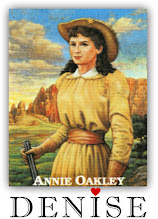