NEABSCO REGIONAL PARK - WE FOUND A NEW PLACE TO WALK

We had heard about Neabsco Regional Park in Woodbridge a few weeks ago. It is another place we found not too far from home, a 40 to 45 minute car ride.  I had read about it in one of my online magazines.  Last Sunday we decided that this would be a fun place to take a walk.  You can also read an article in the Prince William Times if you click on this link. 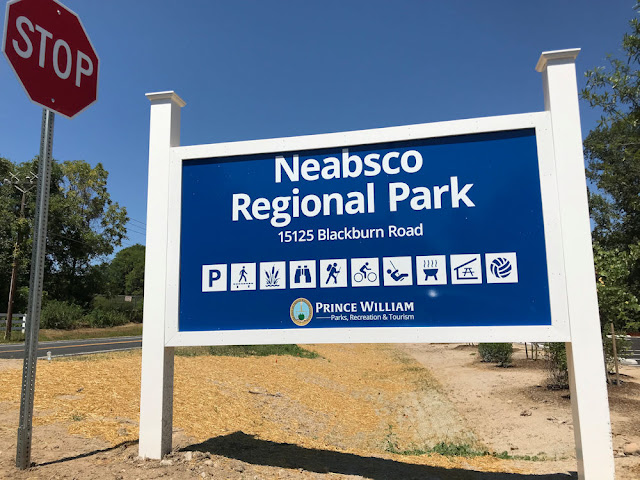 The park is practically brand new, having only been open since June 1st of this year.  It is a work in progress but a wonderful place for a walk, and includes the Julie J. Ketz Wetlands, the Rippon Lodge historic property and the Rippon Landing Neighborhood Park. The boardwalk itself is three-quarters of a mile long, ten feet wide and is elevated well above the marsh.  There is also a two-story observation deck. 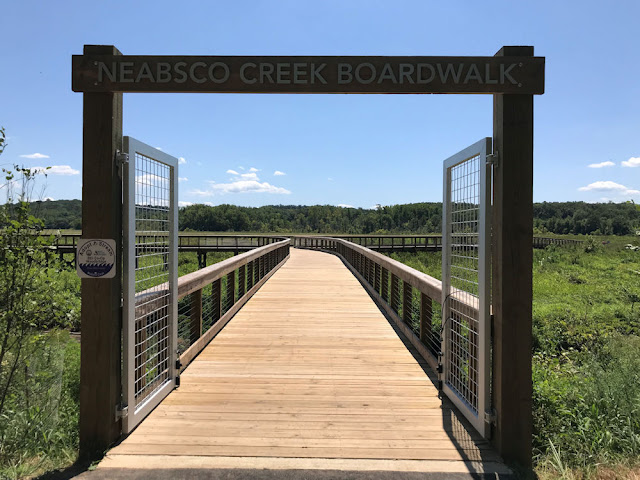 I noticed something hovering as soon as I stepped on the boardwalk.  My first thought was that it must have been a bird.  It was way up here and hard to make out.  After looking for a few minutes I realized it was a drone.  This was the first I had actually seen.  I recognized it thanks to looking at them on sale in the camera section of several shops, and all the advertising they get elsewhere.  Other people were in the area but none seemed to be holding a remote control device, or even interested in what was above them.  So the owner was a mystery and it left me wondering what range they have.

At the beginning of the boardwalk I looked to my left down a waterway, and could see several Egrets and at least one Great Blue Heron.  Too far for a decent photo but it was fun to look for a while. 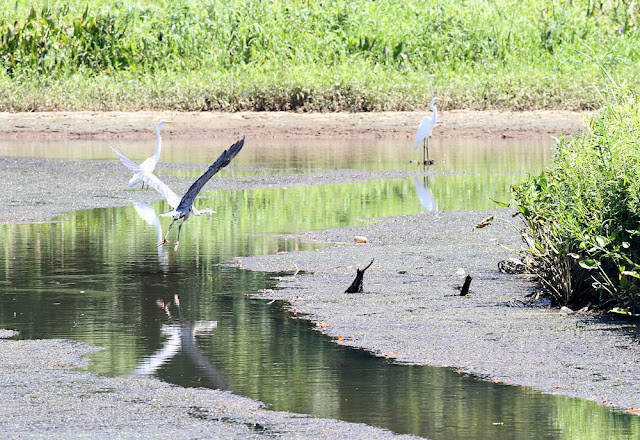 We saw a large flock of Red-wing Blackbirds flying low in the distance, about a hundred of them, recognized by lightning flashes of red on the wing.  I have never seen so many of these birds in one place.  A safe haven for them obviously, and I didn't even attempt a photo as I knew they would be too far away.  Tiny specks if they showed up in frame at all, but still fun to see that many tiny specks swarm across the wetlands and disappear into the rushes. 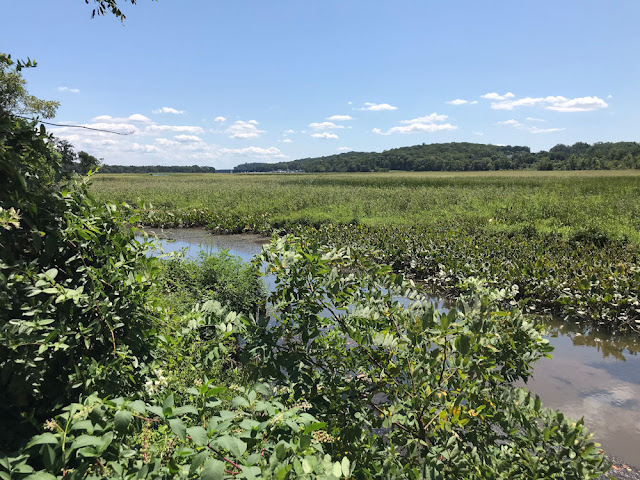 We were impressed with how well made the boardwalk was.  Gregg inspected it pretty thoroughly, right down to the rail where it had been smoothed and rounded off. 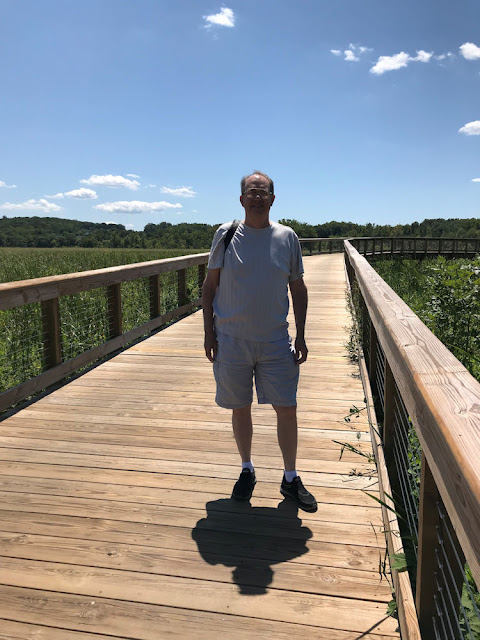 We passed other people, and noticed that dogs were allowed also.  Not sure how long this will last, wondering about the well-being of surrounding wildlife, but it was nice to see them.  Dogs aren't allowed onto the boardwalk at Huntley Meadows, but there would be a safety issue as the boardwalk there is much narrower, and also there are no safety railings (well I almost got that cute dog in full frame). 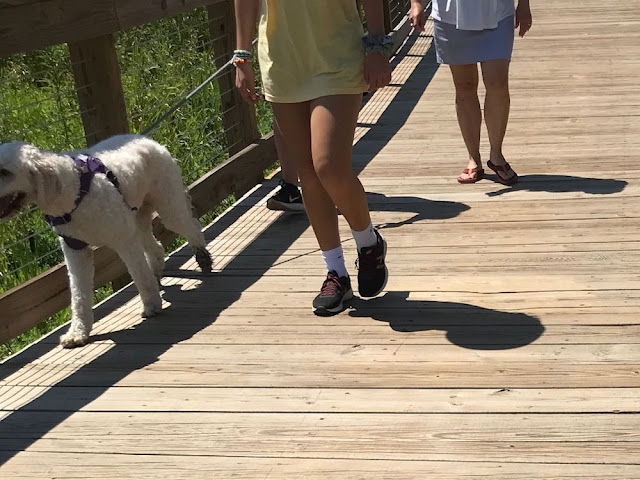 As this place is brand new, and there are those safety issues taken care of that I mentioned, and if the owner's are responsible, it would be nice to see a dog or two.  But then I am a dog person. I could see no rules posted but may have missed them.  We are also in another county, so perhaps things are done differently here.  We'll have to see as time goes on. The boardwalk connects to the area's tidal wetlands and wildlife habitats such as fox, deer, muskrat, beaver, herons, egrets, ospreys, eagles, hawks, snakes, as well as fish and other birds, like those Red-wing blackbirds that we saw.  Also critters like the one in the photo below.  I spotted it when I looked over that nice, smooth rail. I thought perhaps a Handsome Meadow Katydid and the closest to its ID was here.  What confused me was the touch of red on its head, back and legs.  I haven't seen one like it before.  Any help with a correct identification would be appreciated. 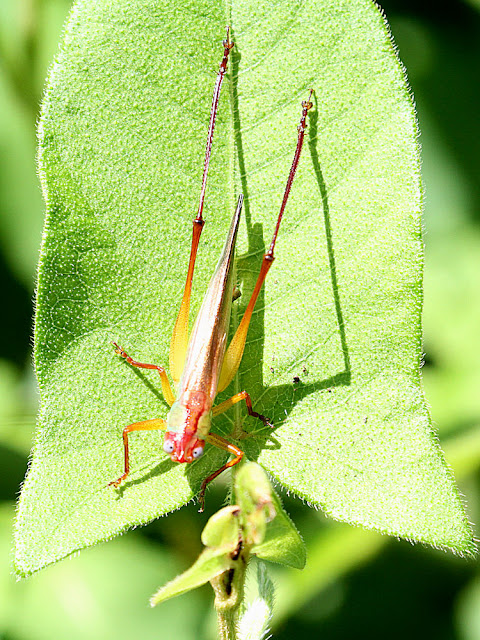 There were also lots of butterflies and some actually stayed long enough for a photo. 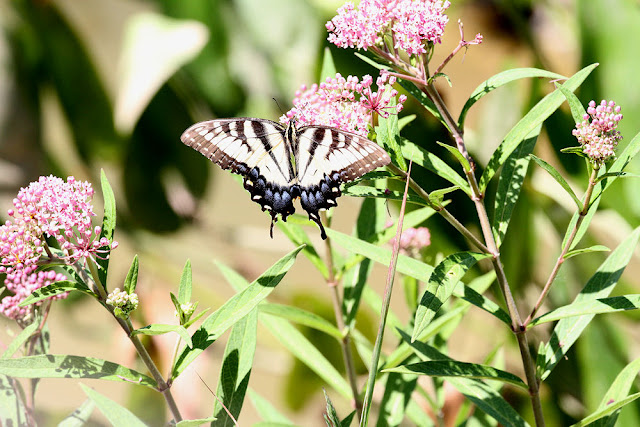 A female Eastern Tiger Swallowtail and the pink flowering plant they are enjoying is Swamp Milkweed. 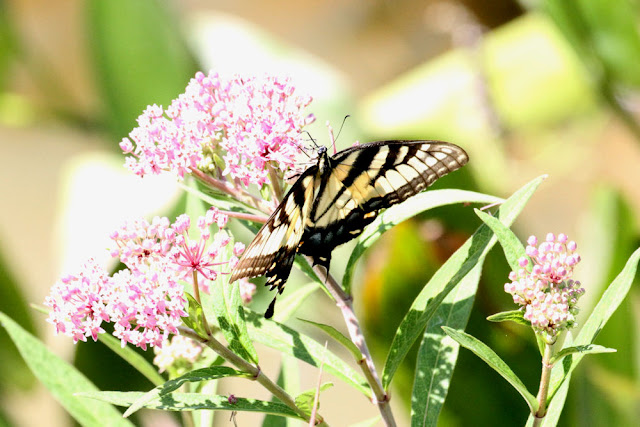 Gregg took this photo of a Great Blue Skimmer. 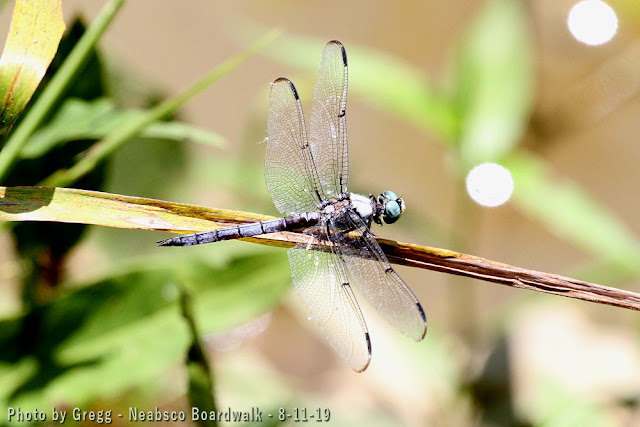 Other wildflowers seen, plenty of these Green-headed Coneflowers, with the added bonus of a tiny Skipper on the left-hand side of my photo.  Thanks to blogging and reading my plant books, I know quite a few but I sometimes forget what I have learned and need a refresher.  I am getting a lot of help with identifying plants thanks to a new app called Picture This - Plant Identifier.  My next step is to compare what they tell me on Google, and I also go back to my nature books. 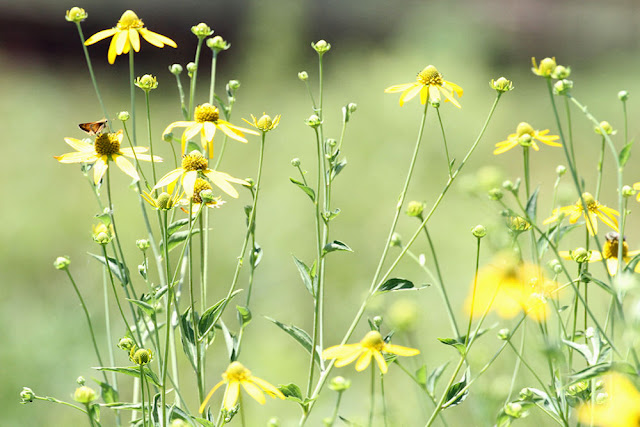 The following photo shows a purple plant that is called New York Ironweed (also called Tall Ironweed).  It has lots of medicinal uses, and for centuries it was used to treat many health issues by the Native Americans, particularly the Cherokee.  They brewed teas from the leaves.  The roots from the plant were often used to treat mouth and stomach related problems.  You can read a lot more information if you go to this link.  I know many plants were used for medicinal purposes, but am no authority on such things.  Interesting to read about though. 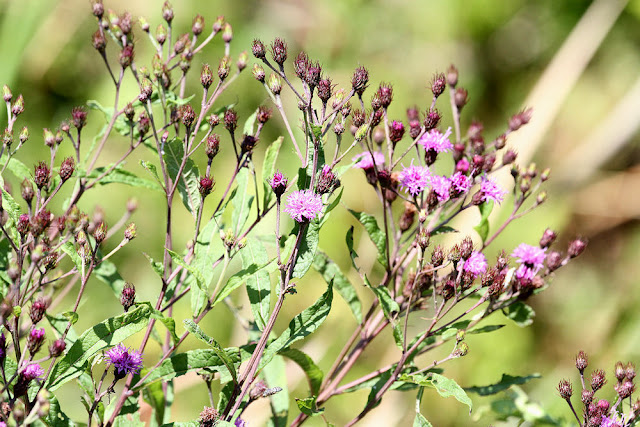 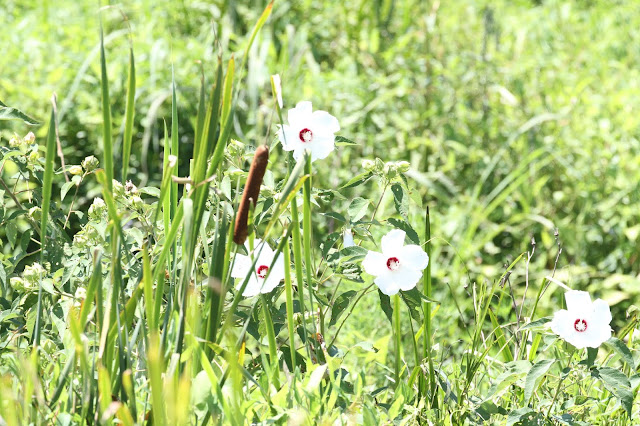 I also found four of my favorite things on one blog (yes I know I have a lot of favorites), a Great Blue Heron, Swamp Mallow and the Handsome Meadow Katydid.  They are outstanding photographs, all taken at one of those favorite places, Huntley Meadows, by its host Michael Q. Powell.  Love checking things out online and fun to discover new blogs.  The Swamp Mallow has an interesting seed pod. 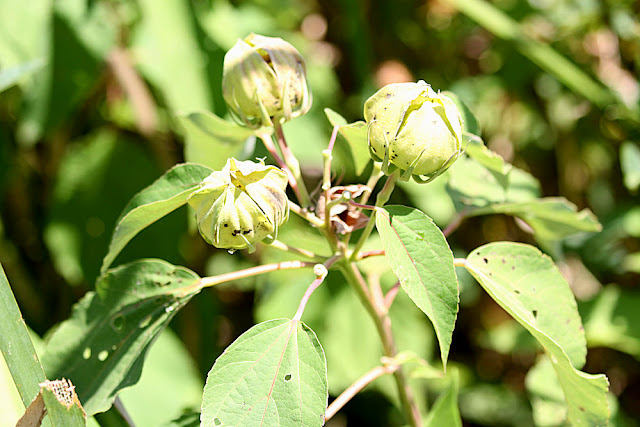 Behind me in the distance you can just make out the boardwalk where we were a few minutes before.  It was hot and humid so I had to wear my sunhat.  I was very glad I had carried a flask of water for us in my backpack. 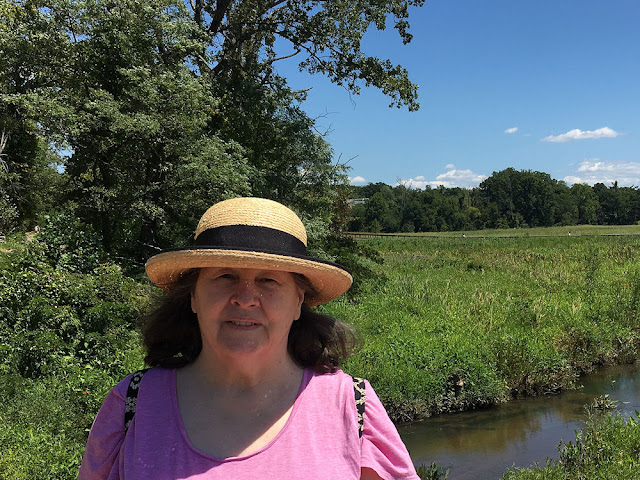 We looped around and made our way back to the car. 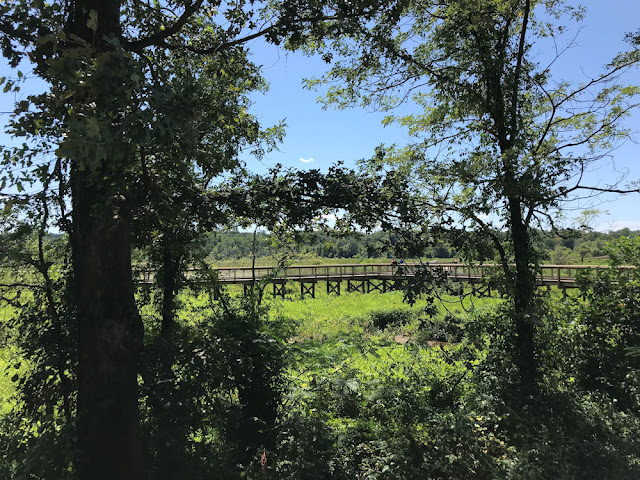 It was a fun walk and well worth the visit. 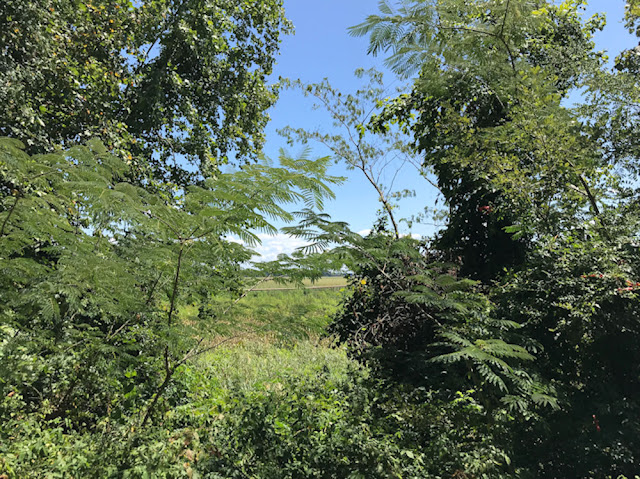 We are both looking forward to going again sometime. 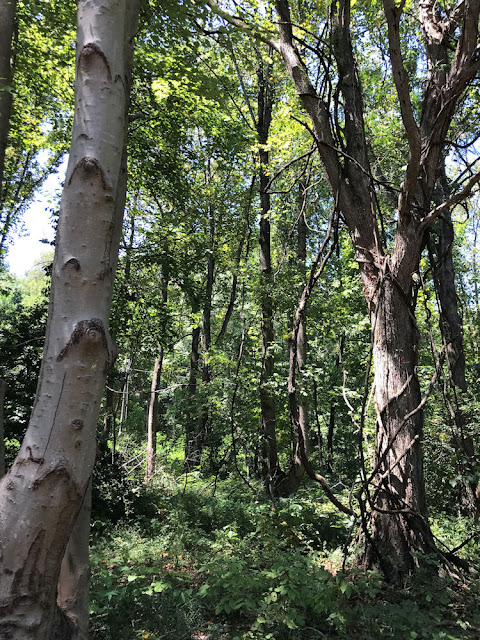 A collage of photos shown below.  Not all of my family and friends read my blog, so I make these to include in an e-mail, or print out for snail mail as we lovingly call it these days. 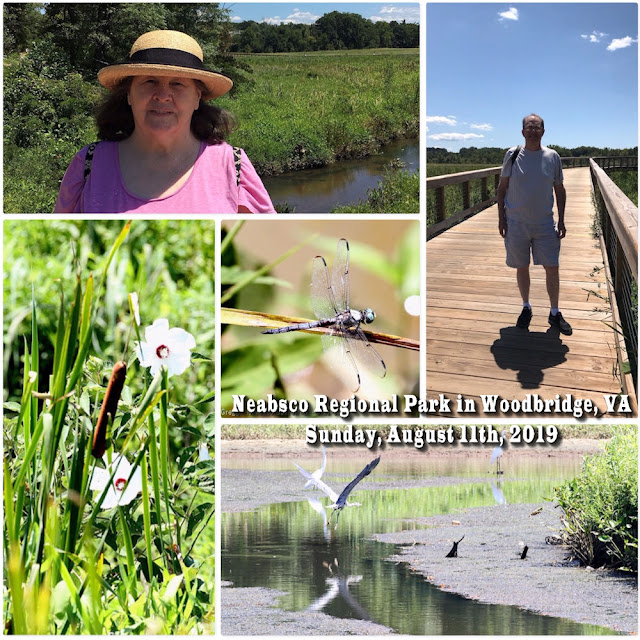 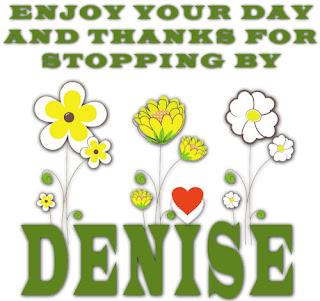