This is a video I took yesterday as we looked out our sliding window/door.  We opened it for just enough time to show you.  The snow was coming down fairly heavily.  Just looked at the clock and at 11.48 p.m. it is still snowing.  Our son and daughter-in-law sent us these photos also.  They have new parkas and were trying them out, and new snow boots.  They are taking a trip soon and need to be prepared. 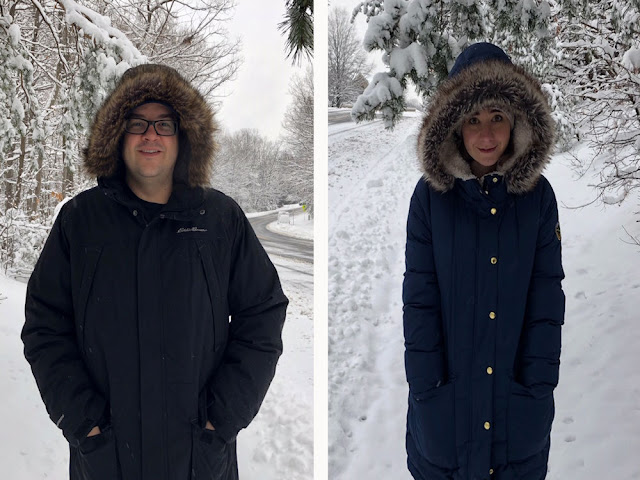 Gregg was out when it was light and was shoveling the driveway. I showed him the advertisement of two local young men/college age students who are earning extra money to do just that, and they have all the equipment. He prefers to get the exercise right now, as was our next door neighbor and a few others around here.  I am unable to help unfortunately.  Too many falls on icy surfaces that have left their calling card even now.  Still waving that phone number around just in case he needs it tomorrow. 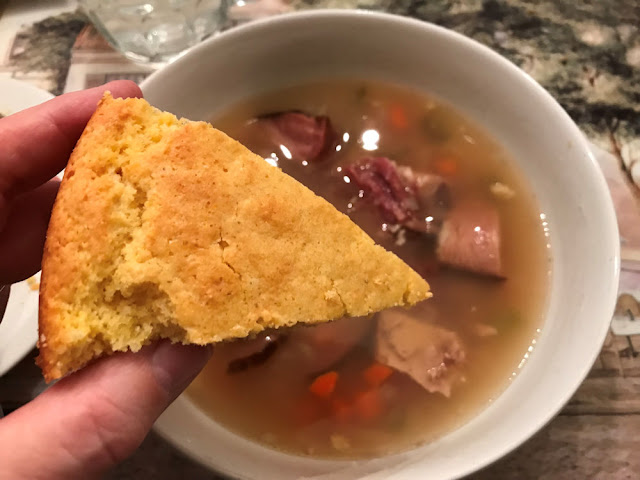 Now onto this weeks recipe.  I am revisiting an old one, great comfort food in this weather.  It is one that I make every year, generally after Thanksgiving.  I had a ham bone in the freezer which I thawed out overnight, along with pre-prepared dried beans left over from another dish and also frozen and thawed overnight.  A nice easy meal.

Recipe as follows: from mum-in-law many years ago.

Put 1 lb. of dried navy beans into a strainer and rinse under cold water.  Pick out any bits of grit or dark beans.

Pour the beans into a large saucepan, cover with water and bring to a boil.  Turn off the heat, cover and let sit for 30 minutes.  Carefully pour back into the strainer and rinse again.

To the saucepan add the beans, one finely chopped yellow onion, 6 peeled whole cloves of garlic, 3 grated carrots, 2 diced ribs of celery and a large meaty ham bone.  Cover with water, bring to a boil and simmer for about two hours.

Take the bone out of the pot, remove any meat and cut into small bit-sized pieces.  Put the meat back into the pot and discard the bone.

When I learned how to make this bean soup years ago from watching my mother-in-law, she used to tell me her favorite seasoning was Lawry's Seasoned Salt and also Lawry's Seasoned Pepper.   I have been using both when preparing various meals ever since, and though I don't use a lot of salt, I always add a little and more pepper.  I would use your own seasonings if you already have a favorite, and only use enough for your own taste.

I also made a cornbread and served it with the soup, but a slice of crusty bread would go very nicely.