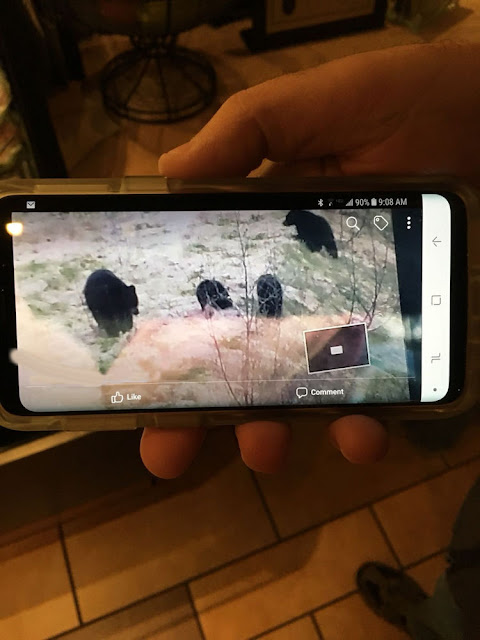 though there was great excitement downstairs this morning. Gregg went for my coffee and his iced tea while I was getting ready, and found a crowd at the window. He was told a mama black bear and her three cubs were just below. They had moved on by the time he looked, but a man let him take a photo of his photo which he showed Gregg on his iPhone screen, and there they were quite clearly. 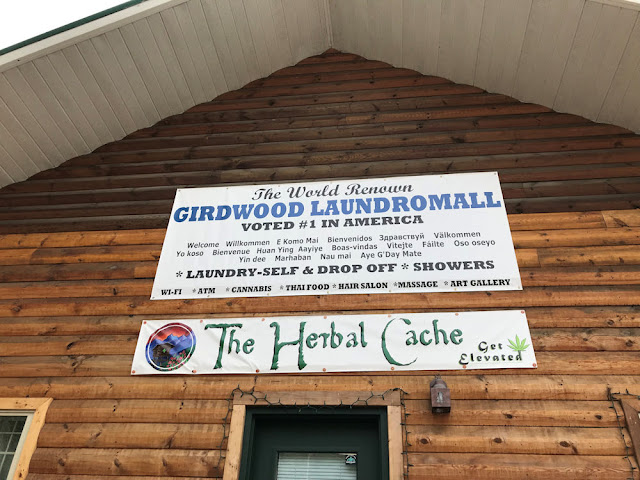 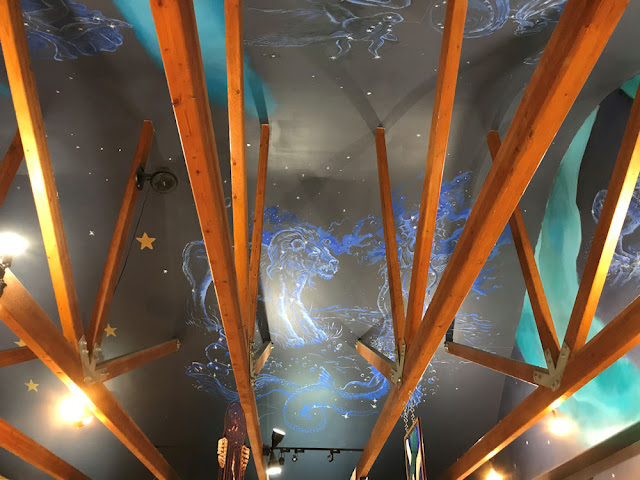 Gregg and I found a laundromat not too far away in Girdwood, and the ceiling was painted like the sky with constellations.  Of course I took photos! 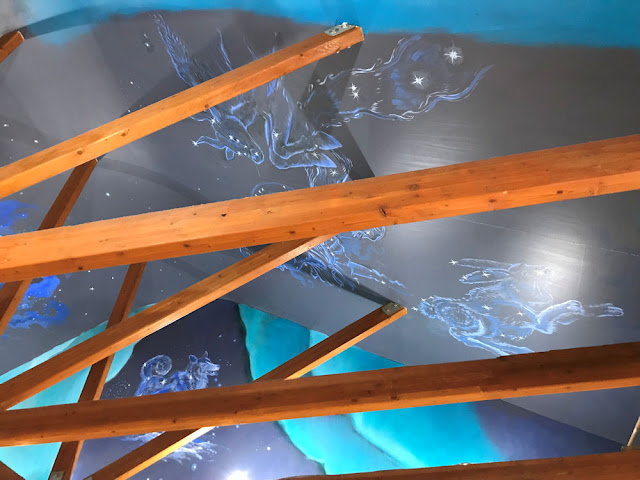 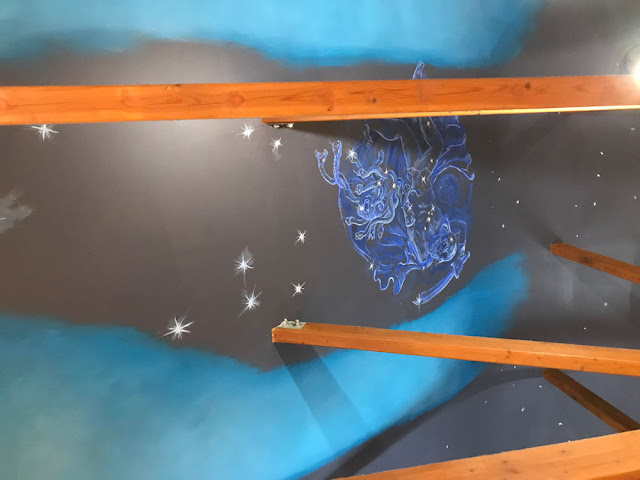 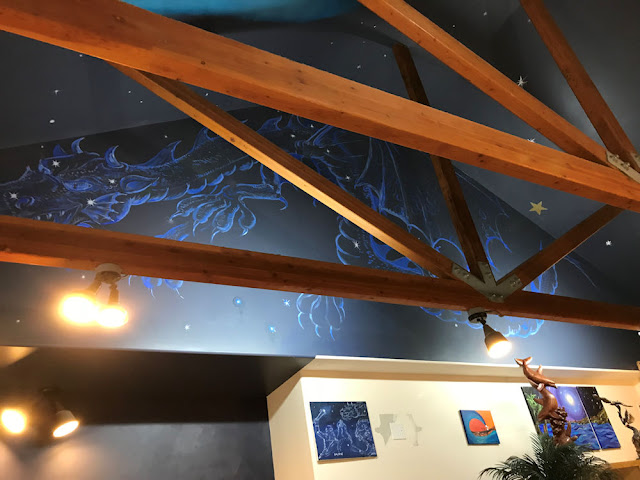 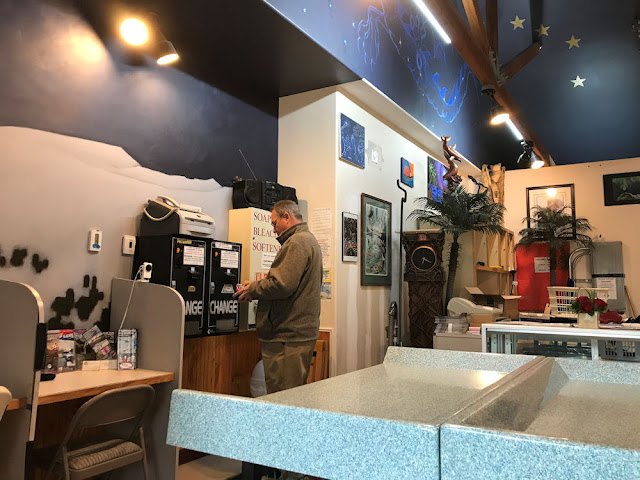 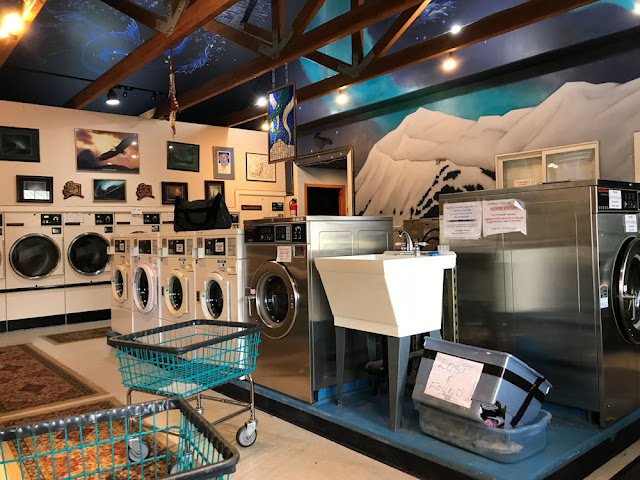 It took 20 minutes for a wash cycle.  I brought my iPad to read while we waited, but rather than hang around for the dryer to finish with our clothes, we decided to check out the mercantile store nearby. 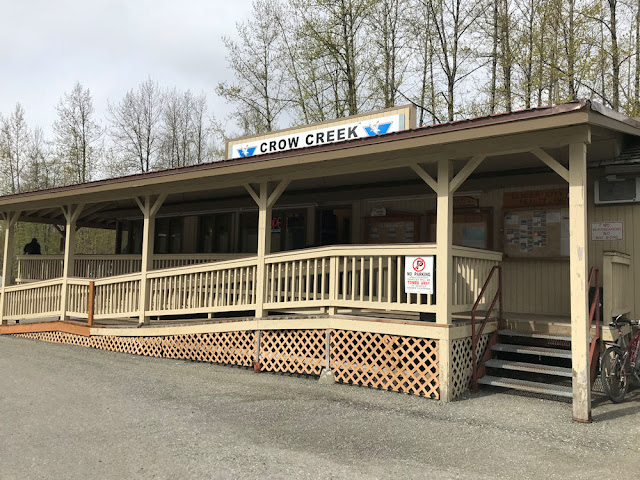 Next we had breakfast in a small restaurant next door, where we ate a breakfast biscuit with home fries. 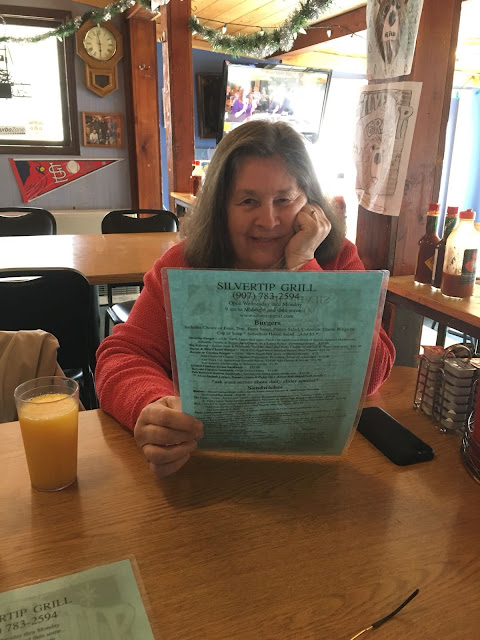 and chatted with locals outside. 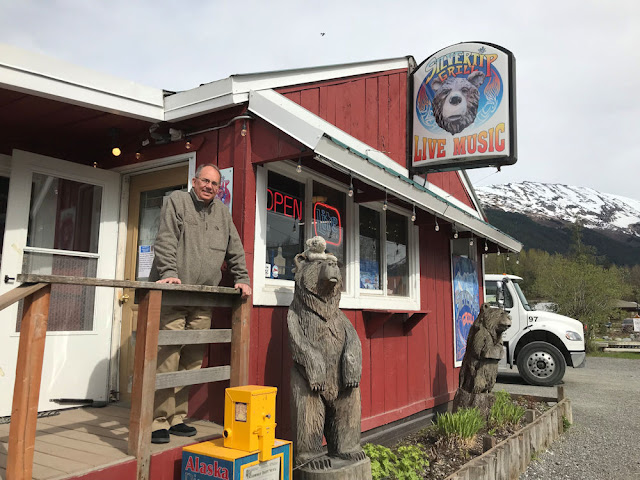 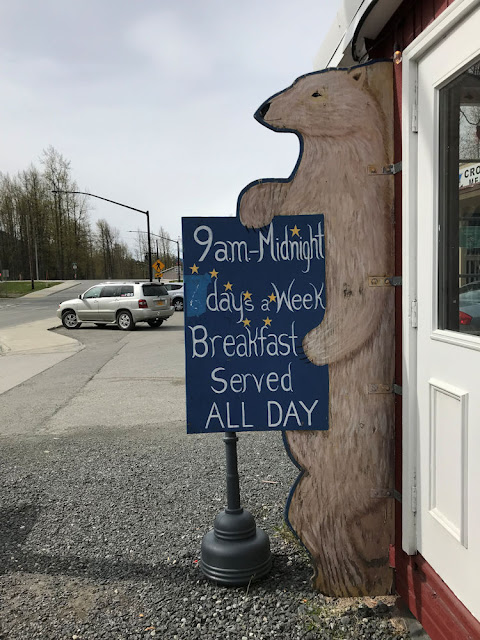 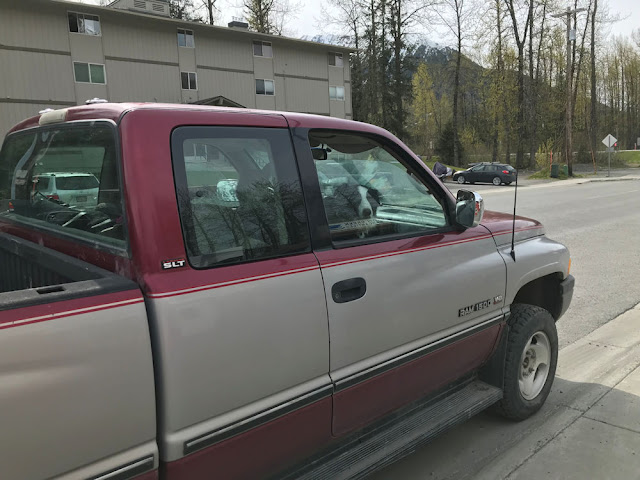 but they were anxiously waiting for their humans to come back, so we didn't want to interrupt.  Want to come home with me?  No?  Too bad, I would treat you like you were the center of the universe, and give you kisses as many as there are stars in the sky, and constellations in the heavens, just like in the laundromat. 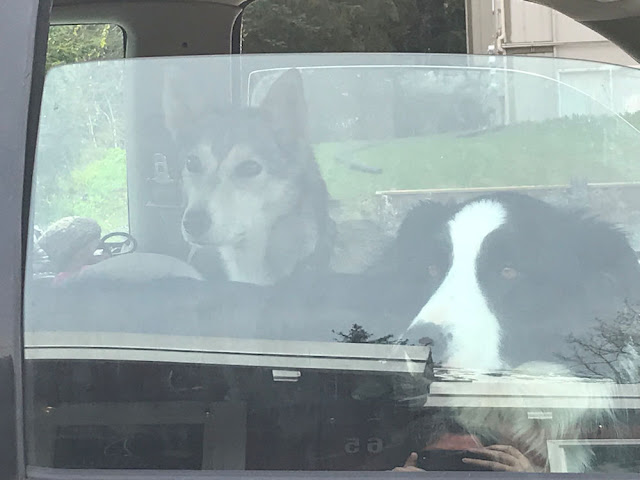 After we ate we picked up our newly washed and dried laundry, then back to the hotel to see if my computer had soaked up some electrons. It had not! I am having trouble as the screen won't turn on, and we think my computer is kaput!  Ugh!  Of all the luck! 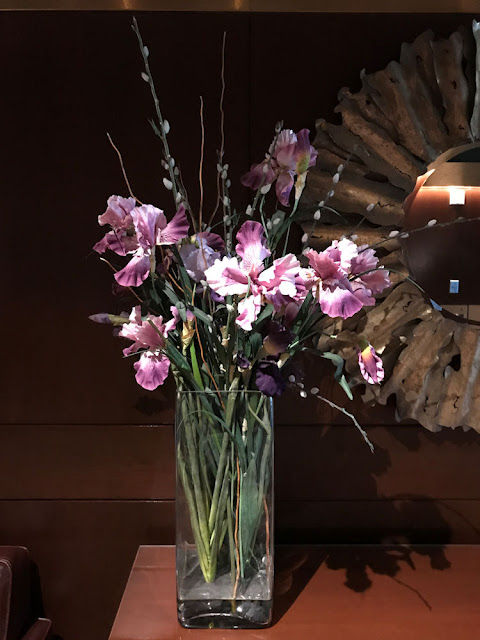 (There are vases of flowers placed all around the hotel.  Very pretty!)
Fortunately I had downloaded everything to the portable hard drive before leaving home.  As for my photos, as a precaution I keep them on my camera card without deleting after downloading everything to my computer.  Breathing a sigh of relief because this is exactly why I am super cautious. I learned my lesson when it happened before a few years ago. You just never know when your computer is going to throw its hands up and say, enough already!  I am going to have to wait until we get home before I can do anything.

(These are photos that are in our room.  Love them!)
1.44 p.m. Gregg just got off the phone to a cousin.  They connected through Facebook.  Her grandmother and Gregg's grandmother were sisters.  We are meeting up on Sunday as she lives in Anchorage, and when she saw that we were heading this way she invited us over. 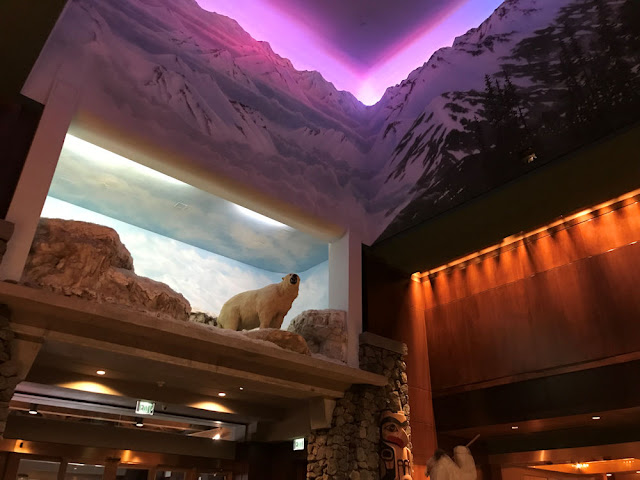 (I say hello to polar bear when we come back from looking around.  He's always a welcome sight.)
5.31 p.m.  It has been a quiet day.  I had a text from niece to say that they were about to board their flight back to Germany.  They had to change planes in Seattle and had a 12 hour layover. 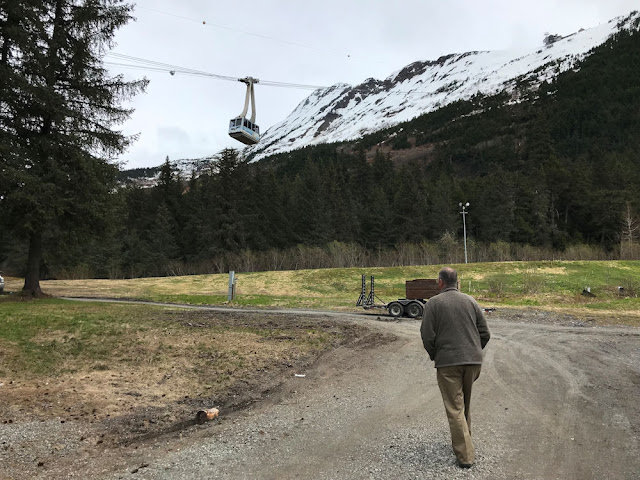 We have been taking walks in the evenings on the hotel grounds.  Many of the trails are closed due to avalanche warnings. 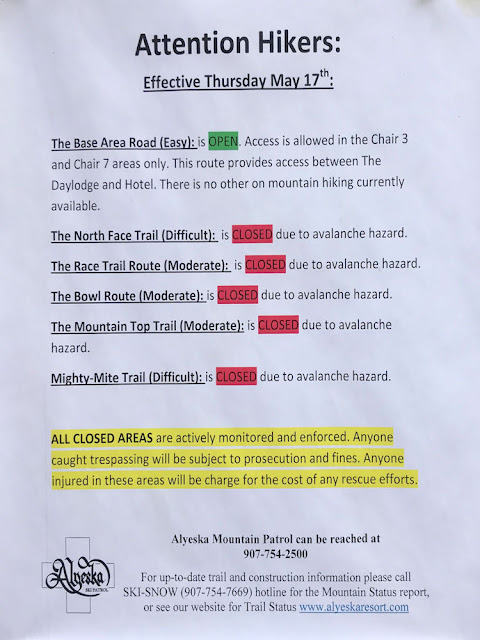 We have seen a gradual snow melt since we arrived, but there is still of lot at higher elevations. 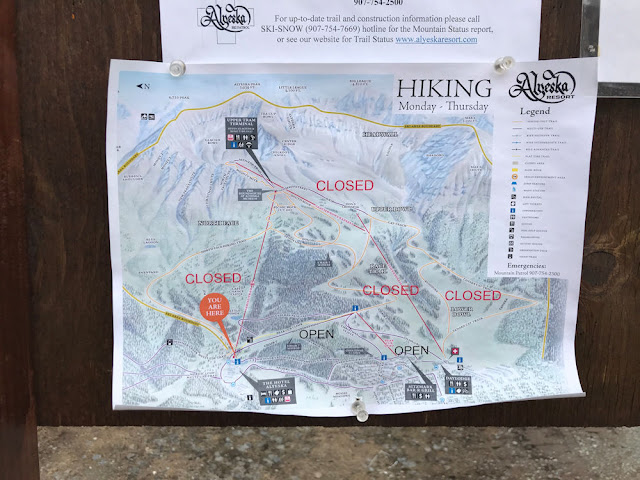 These warnings are in strategic places all around the hotel. 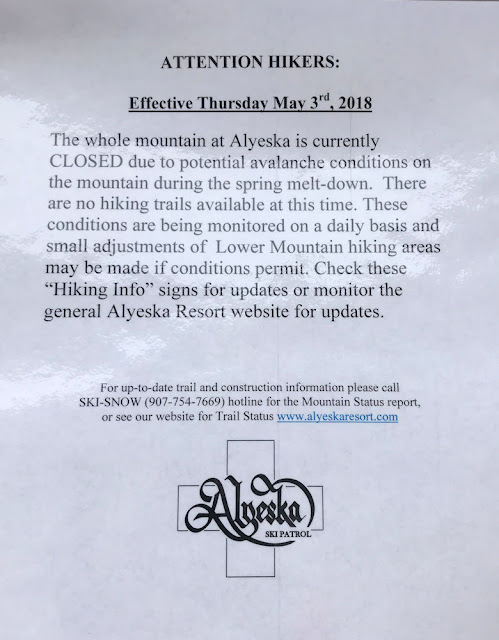 On our walks we talk loudly and don't wander too far, especially because of the sighting of the bear family earlier. We have seen people park (not staying at the hotel) and walk on the trails which are open to the general public.  Some of them have bells tied to their walking sticks. Also they often have one or two dogs. 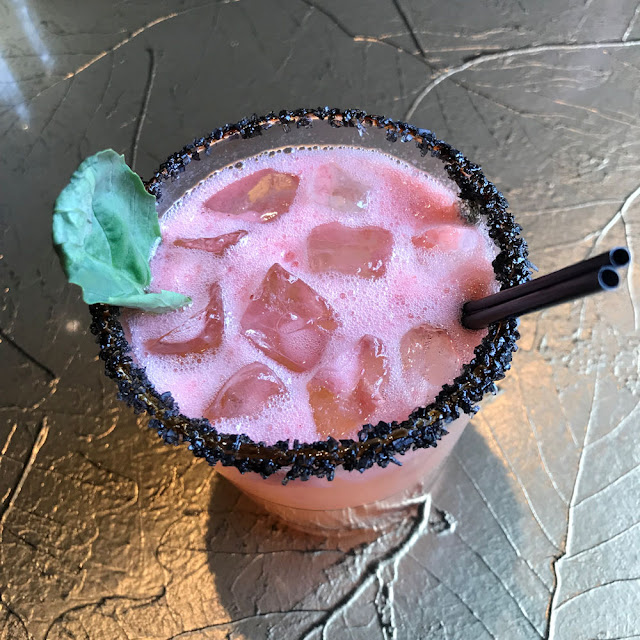 We went for a cocktail later and Gregg asked the barman if he had seen the bear family again.  He told us no, but when they were there this morning, he saw people outside getting their photos taken with their children, with the mama bear and her cubs not that far away. He could tell even at this distance looking down through the widow, her body language was showing agitation. Oh dear, they might seem cute and cuddly to some, but they are still wild animals.  The barman was trying to give us a gentle warning not to get too close and we thanked him, even though we would not have. 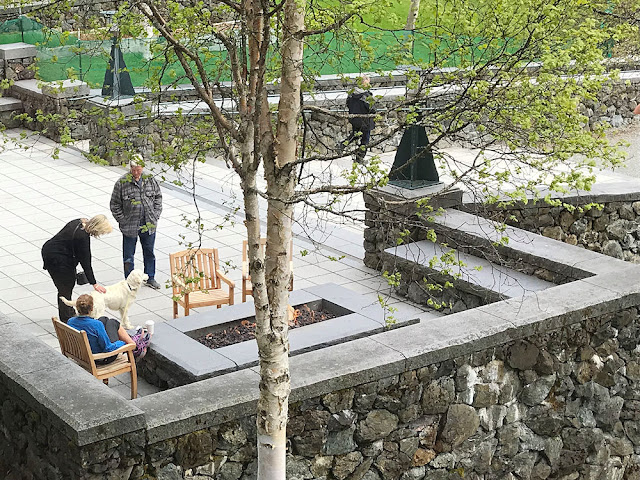 (This is the view from where we are sipping on our cocktail.  There are two large fire-pits, one here and the other at the front of the hotel.  They give off lovely heat as you walk by, and it is a relaxing place to sit for a spell as you can see with this lady and her dog.)
We leave for home next Tuesday the 29th.  Three full days left after this one.  The countdown has begun.