Happy Labor Day, with grateful thanks to those who work to keep everything going, especially in these unpredictable times. 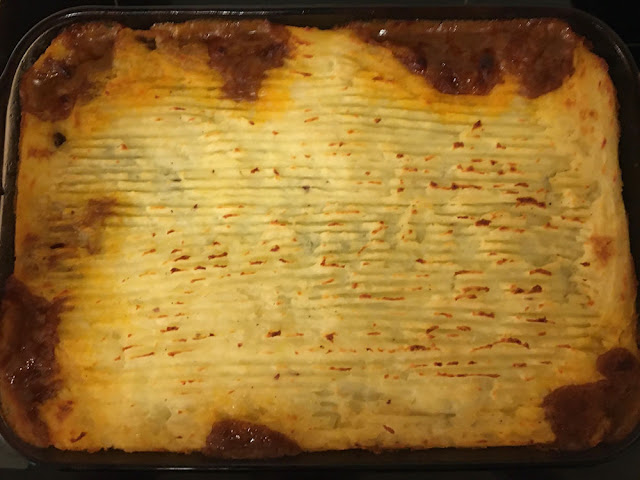 I found my recipe on YouTube this week, at this link.  Normally I don't follow a recipe as this dish is something I learned when my Mother used to make it when I was a child.  She always called it Shepherd's Pie and that's all I knew it as for a very long time, but there's history behind the name and I'll share that below the recipe. 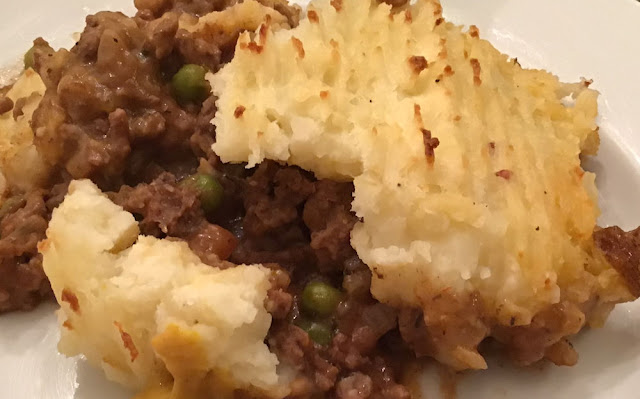 Wash and prepare the vegetables.

Cut your peeled potatoes into four pieces.  Put into a large pot, add 1 teaspoon of salt and cover with water.  Put the lid on top of your pot and bring to a boil, lower heat and cook until tender, about 15-20 minutes depending on the consistency you like for mashed potatoes.

When potatoes are cooked, drain carefully in a colander and put back into your pot.  Or you can use a large mixing bowl if you prefer.   Add 1/4 cup Cheddar cheese, 1/2 cup milk, 1 egg yolk and mix until you have the mash to your liking.

Put 3 tablespoons of olive oil into a large frying pan and heat to medium-hot.  Carefully add chopped onion and sauté for 2-3 minutes, then add the garlic and cook for another minute.  We don't want the garlic to burn so turn down the heat a little if necessary.

Add the diced carrots and cook until tender, stirring occasionally.

Add lamb and cook until meat is browned through, stirring to break up the meat.

Add 4 tablespoons flour.  Stir until combined and cook for two minutes, to get rid of that 'flour' taste.

Transfer to a baking dish, spread out evenly, and use back of spoon to flatten a little.

On top of this add the mashed potatoes And as above, spread out and flatten so that when you cut the pieces into single portions there will be the same amount of beef mixture and potato on each plate. Score all over the potatoes with a fork.  This will make the top brown and have a nice crust.

Not forgetting your oven gloves, take out of the oven and place on a cooling rack for about 15 minutes, or as long as it takes so that you don't burn your mouth when eating it!  Yes I know, I sound like a Mom. 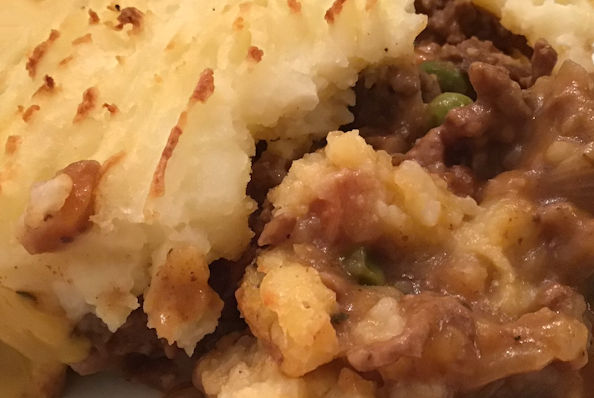 We changed a few things.  We didn't add the amount of oil called for, maybe a tablespoon. To the cooked potatoes we didn't add the cheese or the egg yolk, just salt and pepper, butter and a big spoon of sour cream.  Add whatever you do when making your own mashed potatoes.

I suggested that we add a couple of tablespoons of Daddies Sauce to the meat mixture when cooking next time, or Worcestershire Sauce.  I felt it needed a little extra something.  The ones my mother made all had a seasoned gravy mix, but one of the reasons I chose this recipe was that I wanted to make it from scratch

If you are not used to the salt in foods, you can leave that out. I always try to cut back on ours and don’t usually add the amount called for in a recipe.

Also perhaps a little more thyme and rosemary.  I had fresh rosemary on hand but not fresh thyme, so I used dried.

We both gave this dish a ten out of ten.

According to its history, we turned our Shepherd's Pie into a Cottage Pie, because I used ground beef instead of lamb.  Mother always used beef in hers, and always called it Shepherd's Pie.

Cottage Pie originally came from England, dating back to 1791.  Shepherd's Pie appeared in Ireland and dated back to 1870.

According to what I read online, sliced potatoes were traditionally layered on top of a Cottage Pie because people of limited means lived in small cottages, and the potatoes were done to resemble a cottage roof's shingles.

A Shepherd's Pie topping was always mashed potatoes.  I am not sure why it is called 'pie'. Lamb was used and shepherds looked after the lambs, that's where the name Shepherd's Pie came from.

As for choice of vegetables, I have always used onions, carrots and peas, but some say no peas and some say no carrots.  Some say both and I am in that category, plus the onion which again goes back to how my mother made it.

My Sweet Other Half wanted to use additional vegetables, plus hot sauce and I balked at the idea.  I can be adventurous in cooking but not when it comes to my mother's recipe. "You can add anything you like once it's on your plate" said I with a smile.  His suggestions were a bridge too far, as I didn't want to mess with mother’s shepherd's pie, and the thought of putting hot sauce might sound good to many, but not to me.  I quickly add I enjoy hot sauce in other recipes.  His mom also made Shepherd's Pie and he remembers that from childhood.  It was very similar to the one made by my mum, and my mother-in-law and my mother put together excellent meals.

If you have made this, how do you do yours?  I suppose we make them to our own tastes and that's what is important.

Vegans and Vegetarians have been known to call a meat-free Shepherd's Pie as 'shepherdless' pie.  For those, using Quorn, mushrooms, lentils or a selection of other vegetables could be used.

There is also a Cumberland Pie topped with mashed potatoes, with the addition of breadcrumbs and cheese.

Wikipedia has a great write up here.

However you make your 'pie', I wish you Bon Appetit!

Finally, thank you for looking at my recipe.  Have a safe, happy and healthy September, and a great week ahead.