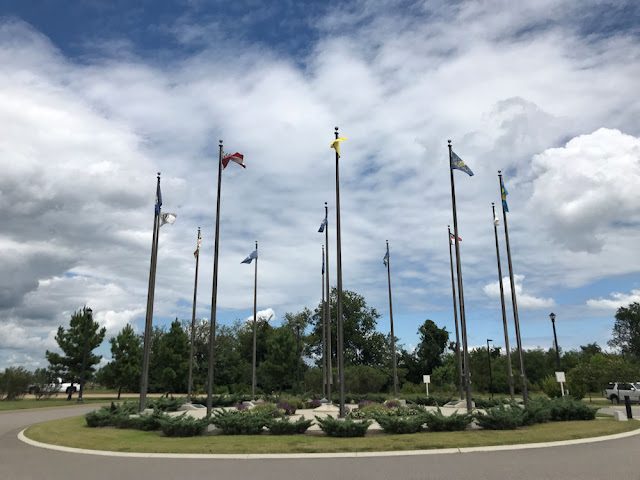 The last time we were at this museum was three years' ago, when we took my brother-in-law who was visiting from Germany.  The museum was open but a lot of items from the exhibits were still in their storage cases, crates were positioned upright and open.  We could at least see what was inside them.  Rooms were being set up. 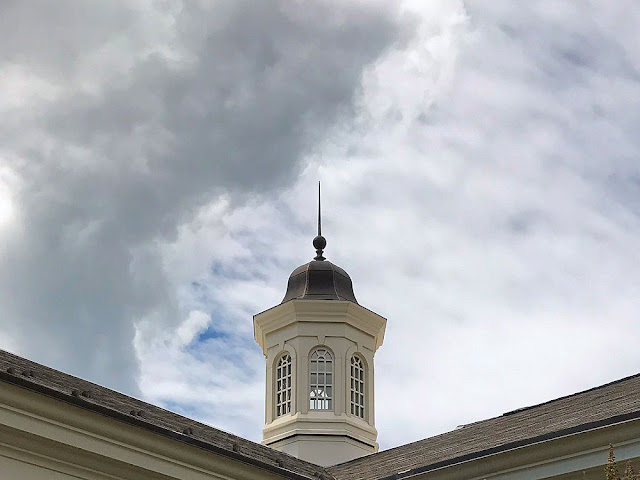 On that visit we spent more of our time outside.  People in costumes were roaming the small colonial village (a living museum).  They answered all questions with lots of patience.  It was crowded that day and they were kept busy.  I remember being impressed at how knowledgeable they were. 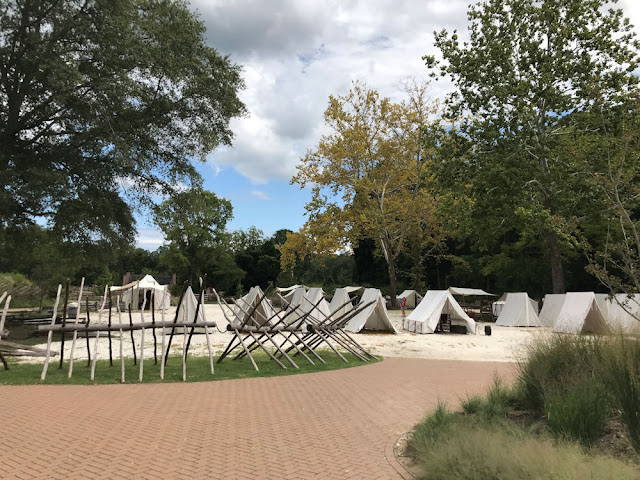 I also remember lots of chickens running around, and we were shown the tobacco drying barn.  We walked through the vegetable garden and were told about okra, cotton and tobacco, and much more.  Certain things were used for 18th century medicine.  All very interesting! 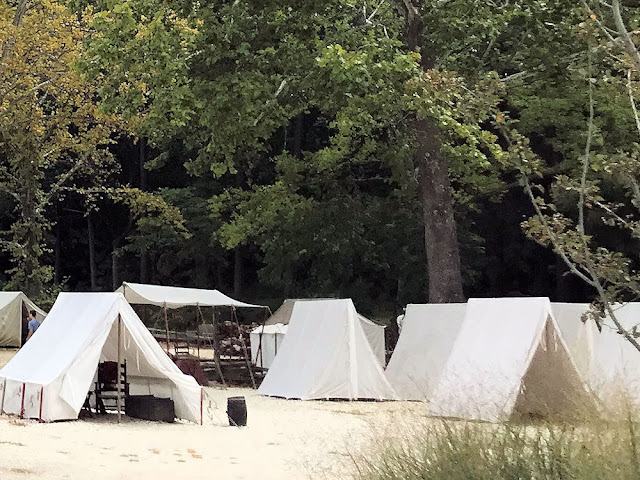 Today the village had been moved further away, still there but some distance and out of sight. In its place were tents with men dressed in colonial military uniforms.  It depicts a Continental Army encampment.  Visitors can take part in artillery demonstrations and see old flintlock muskets fired, among other things. 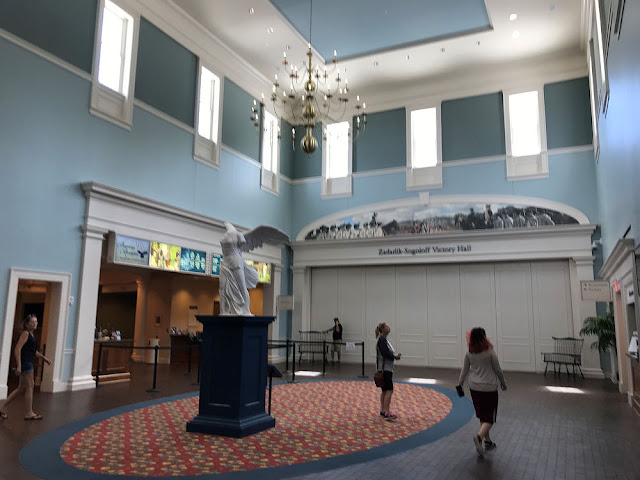 On this recent visit we spent most of our time looking at the exhibits inside the museum, and decided to leave outside for another visit.  Fortunately we don't live that far, a three-hour drive each way.  More often than not we stay overnight in a local hotel as there are a lot of other places to visit. 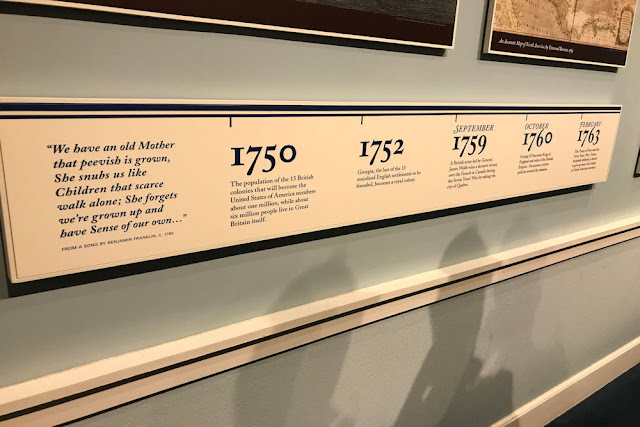 The exhibits were excellent with many rooms to explore.  The hallways were wide and also showed the history of the time, with portraits, historical scenes and timelines on the walls. 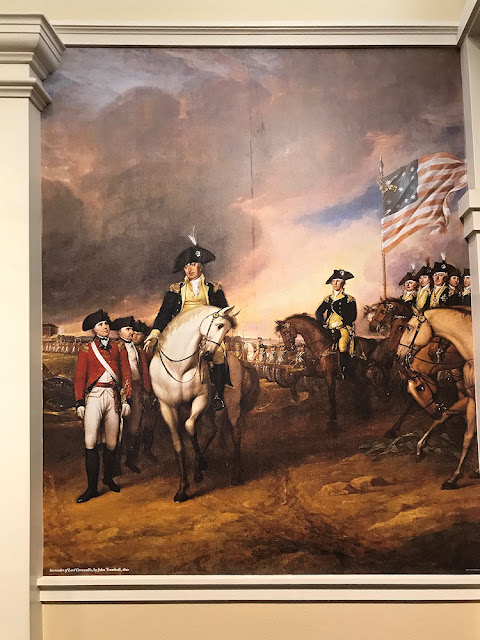 These snippets of history held our attention for a long time before we ventured into the actual exhibits. 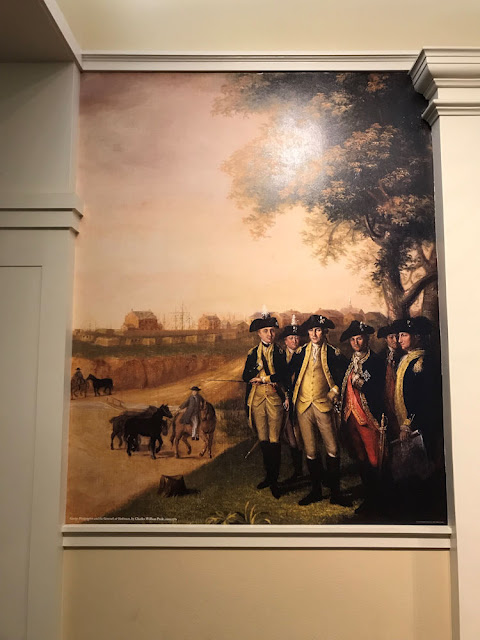 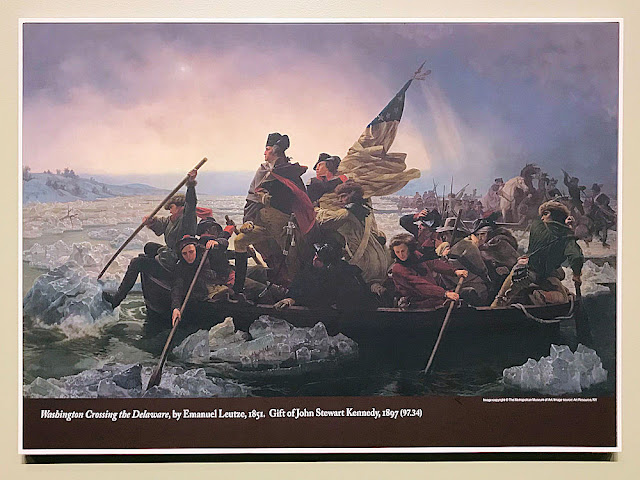 It is always interesting to learn of other people from history that I never knew of before.  Below shows a scene from the Battle of Oriskany, where General Nicholas Herkimer is mentioned.  I looked him up on Wikipedia and read that his parents were German immigrants.  He was born in the vicinity of German Flats in the Mohawk Valley of the Colony of New York.  He spoke three languages, German, English and Mohawk.  If you click on his name above, you can read more. 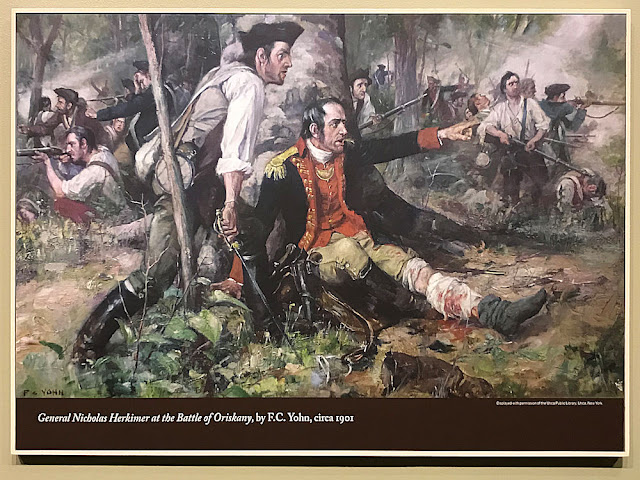 One of those snippets I read was about a short conversation between the lady shown below and George Washington.  She must have been a young woman when this happened.  Her name was Sarah Osborn Benjamin.  Washington asked her if she was afraid of the cannonballs during the Siege of Yorktown, as she carried beef, bread and coffee to the troops. Sarah replied, "No, the bullets would not cheat the gallows...it would not do for the men to fight and starve too."

If you have difficulty reading what I have included below even after enlarging the photo, I suggest clicking on this link.  It is where I found the newspaper clipping and it will be easier on the eyes.

The following painting depicts The Siege of Yorktown. 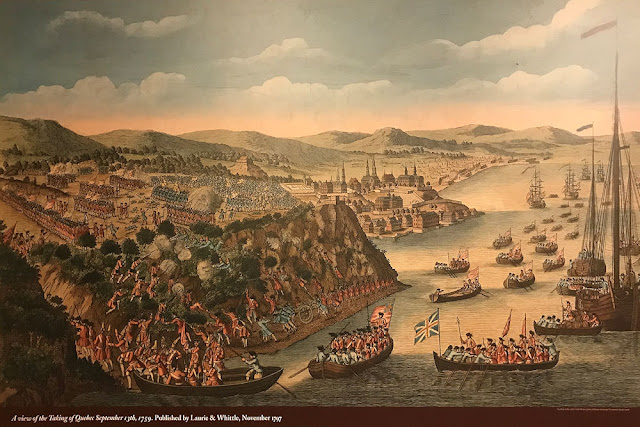 I was interested in the military costumes.  A young man was talking to several visitors as we wandered up and down the hallway.  For one so young (he looked in his late teens) he answered all questions about individual uniforms. 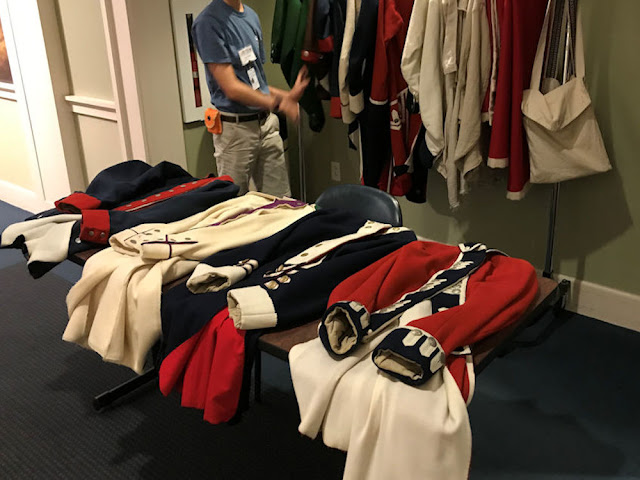 We started our tour by watching the 30-minute movie, "Liberty Fever".  It was narrated by an actor who portrayed a 19th-century storyteller who had traveled the country gathering stories from people who lived at the time.  These movies give a good basic knowledge before walking around the exhibits, 'puzzles' fell into place faster.  One other movie that comes to mind is shown at Mount Vernon.  We have lived in our present home for 28 years, and I have lost count how many times we have seen it when taking family and friends, and have gone on our own occasionally.  It is a good refresher history lesson and gradually as you tour the museum, everything you see starts to sink in.

This link gives information about the movie and the exhibits.

Three uniforms you would have seen in Colonial times. 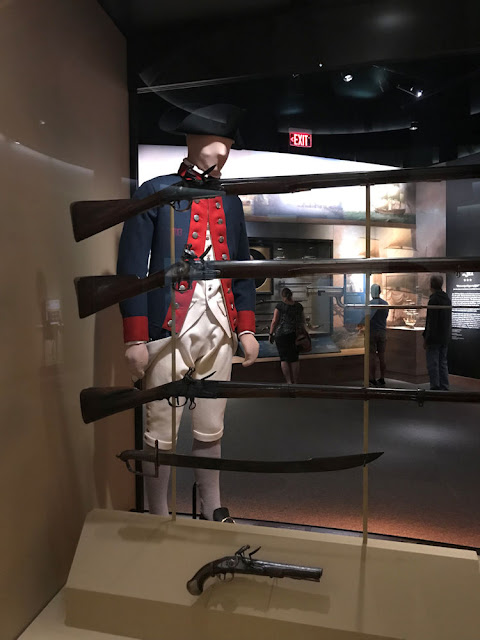 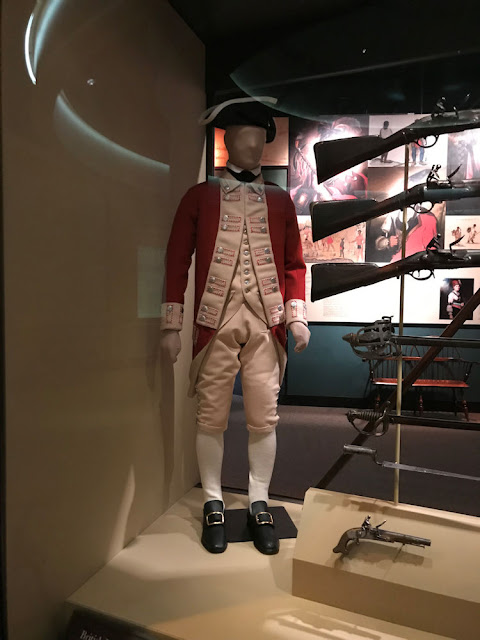 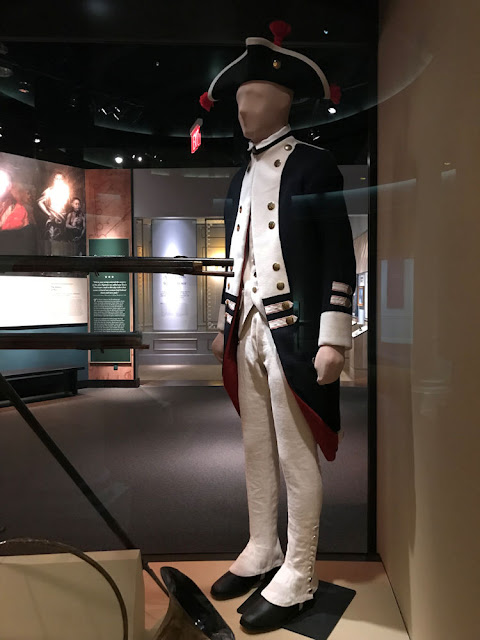 Unfortunately I didn't get a photo of the French soldier's costume.  I remember others standing around the exhibit and it would have been rude to ask them to move. Not wanting to disturb them I was going to come back on my way out. Unfortunately by that time I had forgotten.  There is always next time, whenever that may be.

The next photo shows a mannequin dressed in the same style as the lady shown in the portrait of Alice Hooper, and the original painting our Alice is standing in front of is in the Milwaukee Art Museum.  This one is a reproduction.  You can read about the painting here. 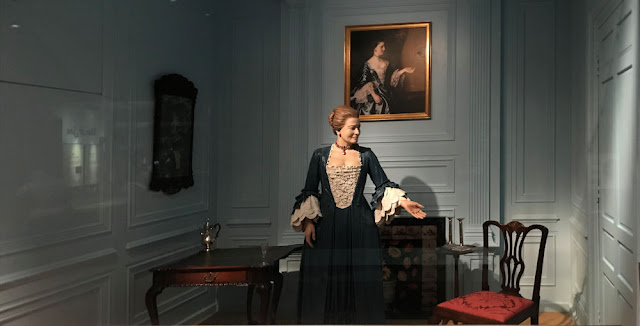 The only information I could find about Alice was her connection to the man who painted her, John Singleton Copley.  It read,  "Before settling in England in 1775, John Singleton Copley was the most sort-after portraitist in the American colonies.  His list of patrons read like a who's who of notable Bostonians. He was adept at flattering his sitters by depicting their conspicuous wealth, while retaining a true likeness. 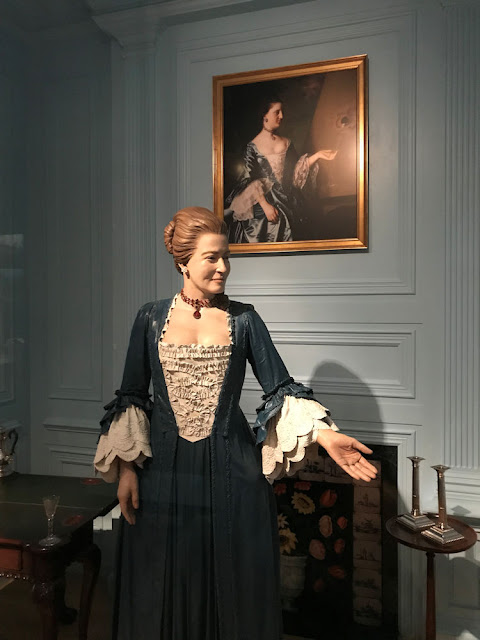 In this portrait, painted to commemorate the sitter’s recent engagement, Copley suggests Alice Hooper’s fecundity and maternal qualities by situating her against the backdrop of a cultivated garden, her hand caressing the fountain’s trickling water. The artist further devoted great attention to the glinting blue satin and frothy lace of Alice’s fashionable gown and the highlights of her ruby jewels, revealing the great wealth of her family. 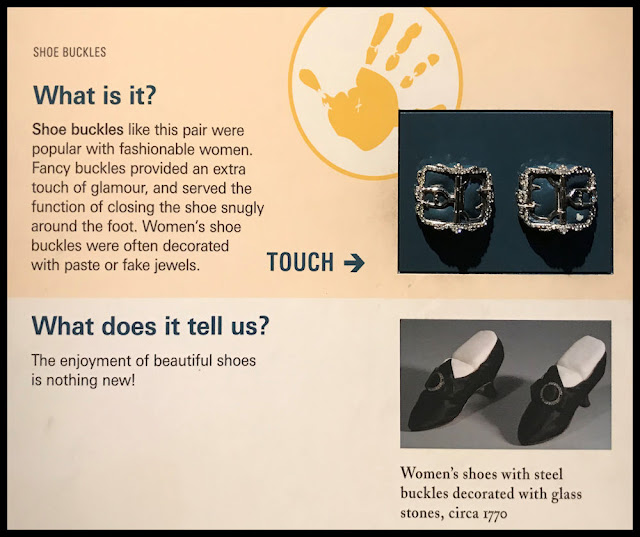 Alice may have worn shoes just like the ones on display. 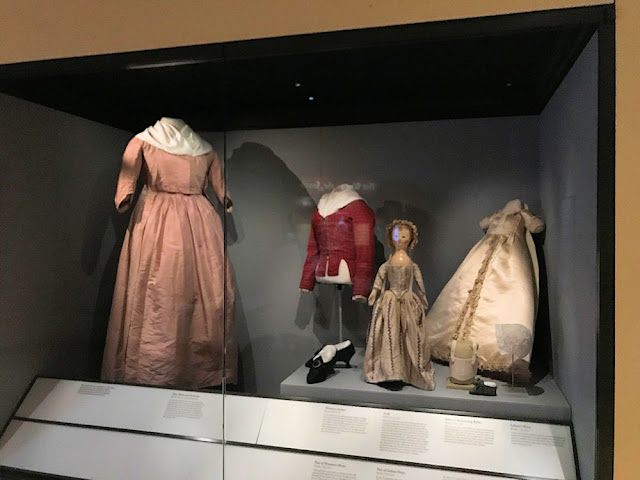 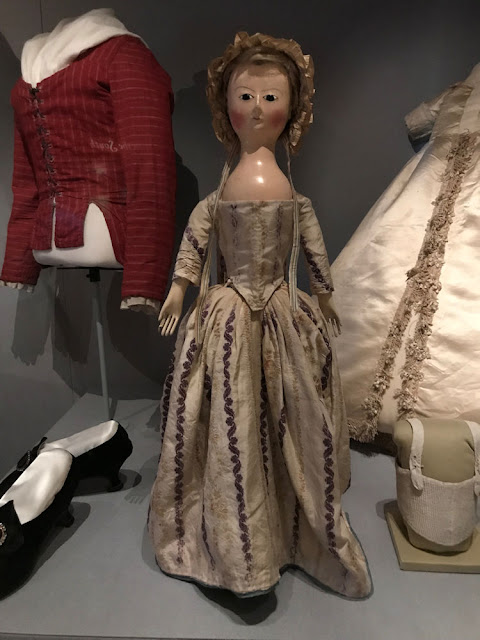 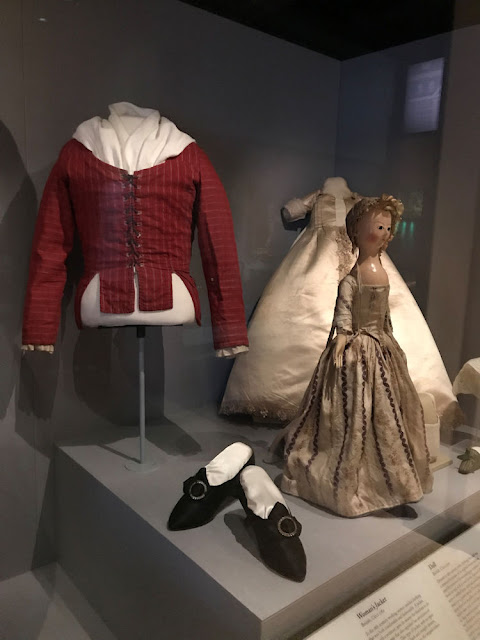 I am saving the other photos I took for Part 2 which will be my next post.  Thanks so much for stopping by and enjoy your day.