Leaving our hotel in Parachute at 9.20 a.m., a late start today.

I have been interested in all these unusual names of town around here.  When we reached Parachute I decided to do an online search to see how they got them.

I read the following from this link.

"According to the Maxine Benson book, "1001 Colorado Place Names", Parachute gets its name from the shape of a creek when viewed from up high, or from hunters on the cliffs above who said, 'We need a parachute to get down there!'" The town also has a Parachute Mountain, so maybe that is where those hunters were.  Not sure if I captured it in the above photo though. 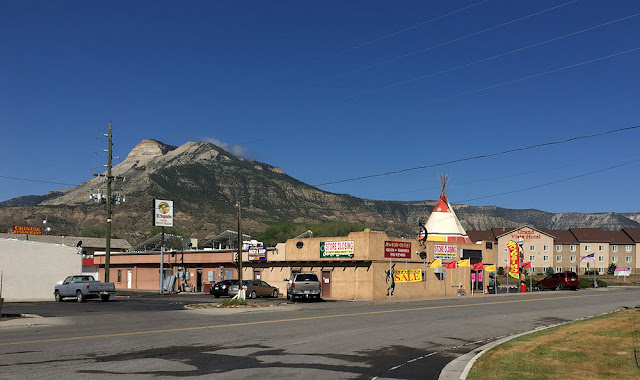 It was 60 degrees F. this morning.  Lovely and refreshing after the desert heat.  Gregg and I are both feeling a bit heady.  We think it is the altitude. 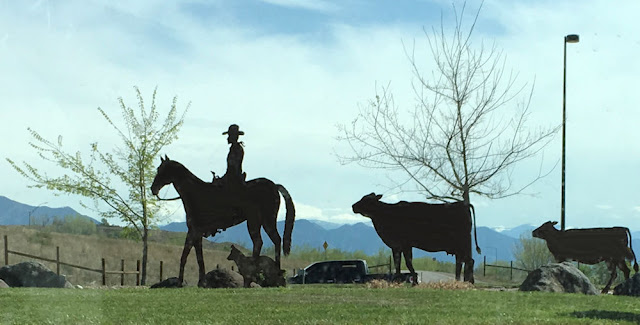 These interesting sculptures were on a roundabout as we drove off the freeway to stop for gas. 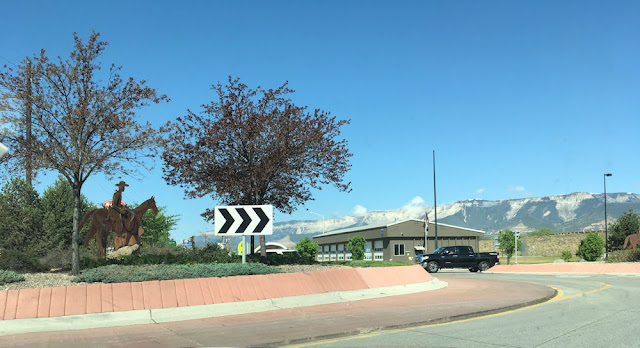 Next town we past was West Rifle, and then Rifle.   There is a state park called Rifle Gap. 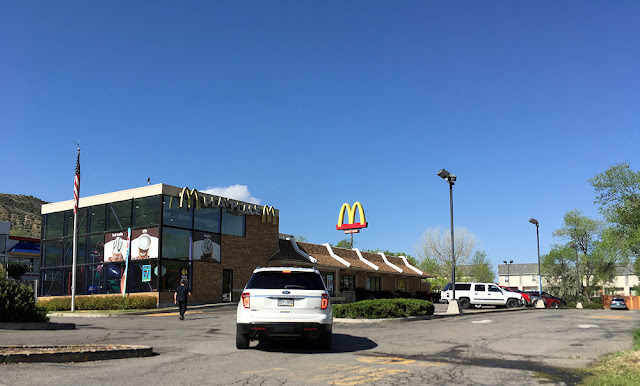 10:29 a.m. we stopped in Rifle for our McDonald's breakfast. I had an oatmeal and Gregg his biscuit. Then off to Walmart where we bought water and snacks.  Gregg surprised me by buying dried Edamame instead of potato chips. They were pretty good.

Rifle, according to the link above, was named "when a soldier left his gun along a creek and returned at night and found it still there." 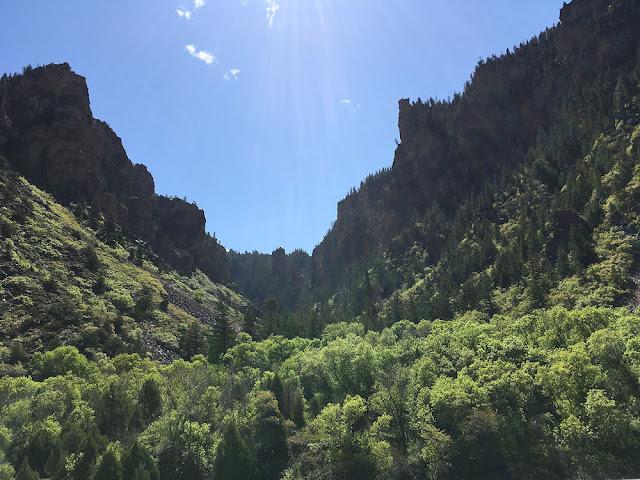 Driving through the Rockies, 6,000 feet up.  Glorious scenery.

We are passing names like South Canyon, Red Mountain, Glenwood Springs and Aspen.  Also saw a sign for Hanging Lake at 10.59 a.m., and just left the White River National Forest.

Other names, Dotsero and there was an Eagle County welcome sign at 11.05 a.m. 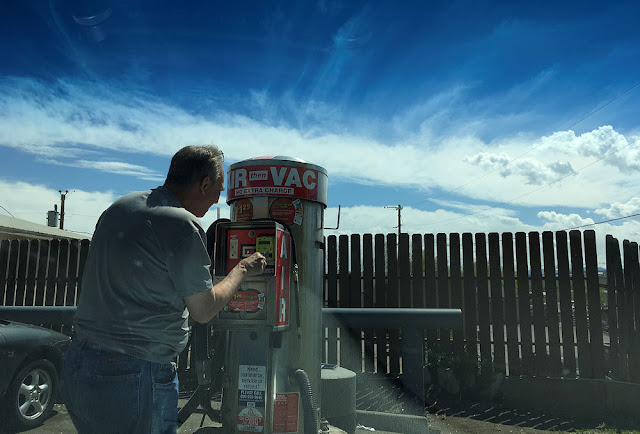 11.14 a.m. We stopped so that Gregg could check the tire pressure as the light came on again.  Gregg is again wondering about altitude.  They were fine. 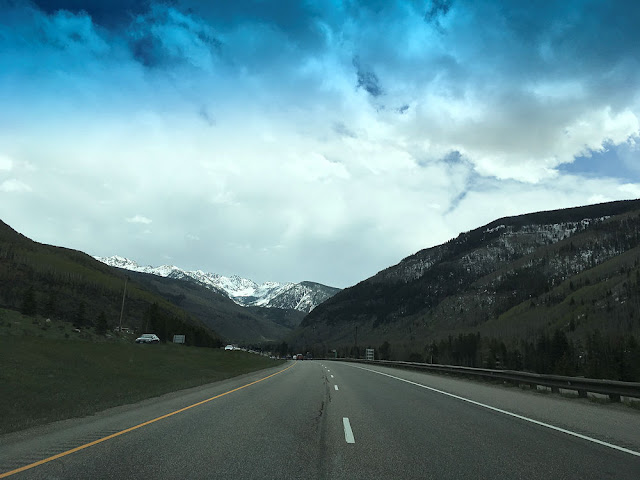 Passed by Ski Cooper and now passing through Vail, 8,150 feet. We have been coming down. Gregg says we must have been almost two miles up. No wonder our heads are fuzzy.

Two motorcycles went by, man and a woman. They are really moving. The man was carrying a bicycle on the back of his motorcycle. 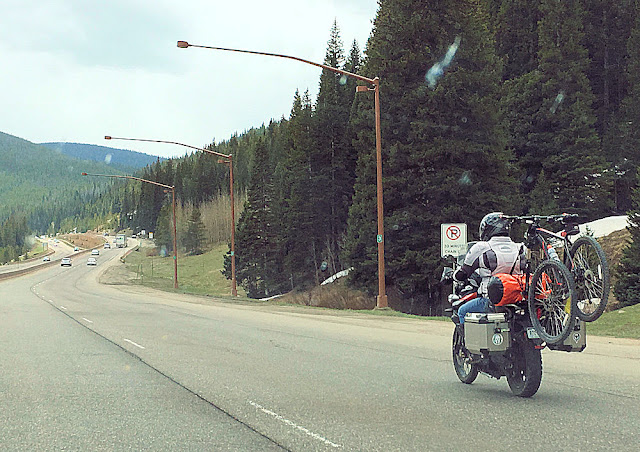 White River National Forest. There is snow up here. Window open to take photos. It is COLD! We have the heat on. We are a long way from Yuma! 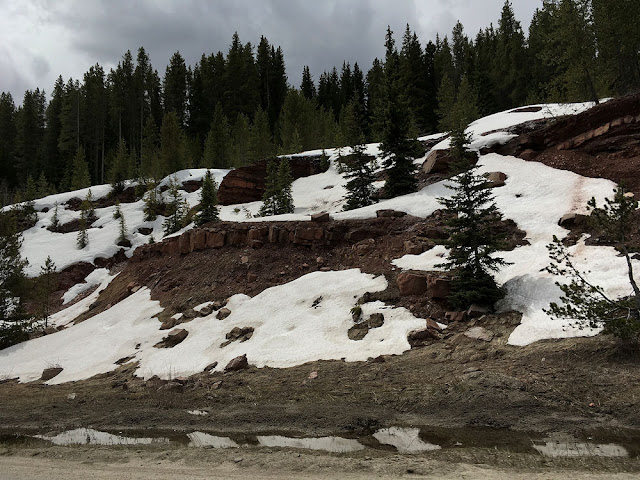 Raining a little, hope it's not snow!

Officers Gulch, Frisco, Breckinridge.  It is a ski area. 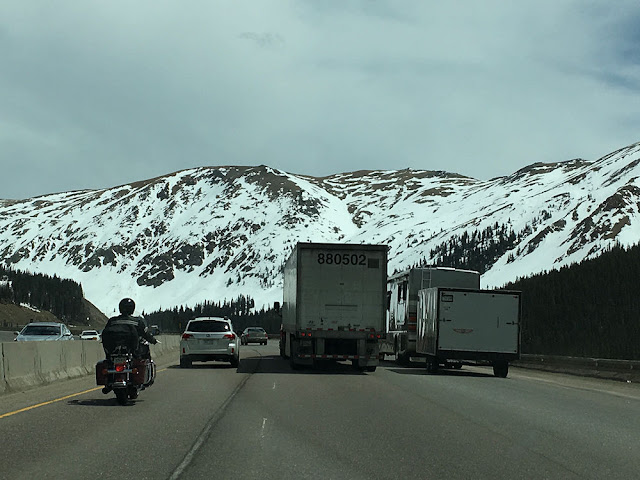 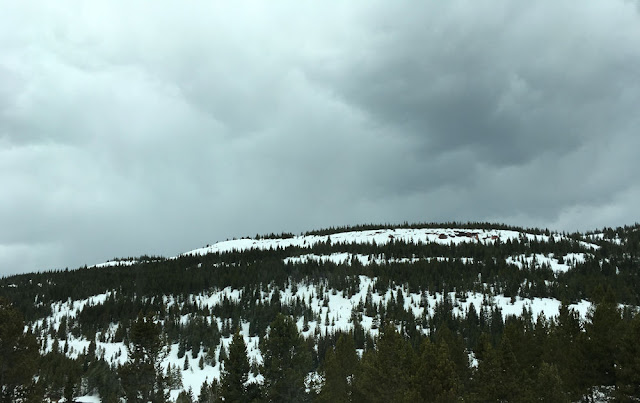 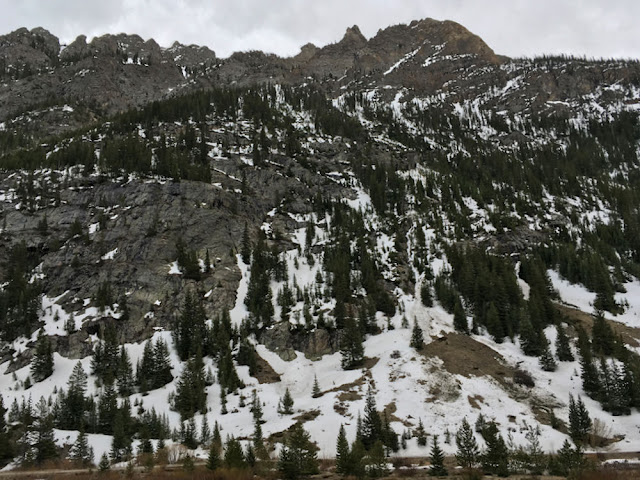 We are seeing signs for gold mine tours. 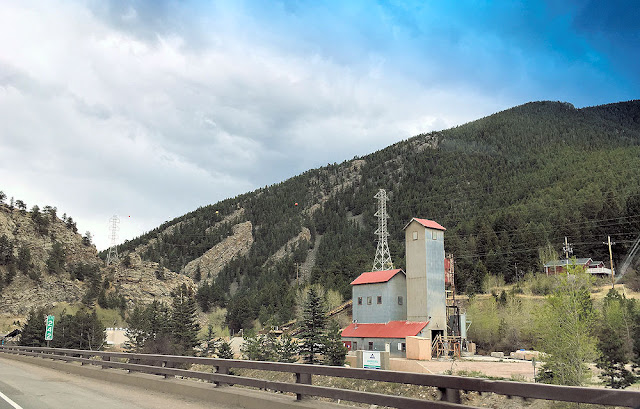 1.32 p.m. driving on the outskirts of Denver now.  We see the city skyline in the distance from the freeway.  It was not a good photo so I am giving you the Puppy Chow structure instead. 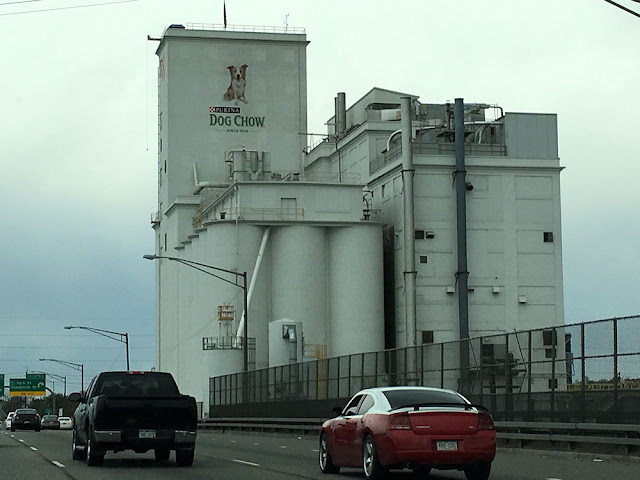 1.51 p.m. Saw another burned out shell of a car.  It must have happened quite a while ago as there was no smoke, looked like the metal was cold.  We saw the police car lights flashing first.  He was standing with a man several yards from the car, whose face from the few seconds I saw it, appeared quite calm, even smiling with the officer.  I thought they were maybe waiting for a tow truck.  Strange to see evidence of two of these car fires, one a raging inferno, and now this.

2.50 p.m. and we are leaving the High Plains Diner in Bennett, Colorado.  The link is to their Facebook page.  I cannot for the life of me remember what we had now as I took no photos.  I know it wasn't a burger!

Gregg went into Family Dollar next door for water.  They were having a competition to see who could sell the most M & M's, so he bought a couple of packets and we snacked on them until we reached the hotel.

4.40 p.m. We booked the hotel in Goodland, Kansas. We should be in Kansas in two or three miles. This part of the journey has been through miles and miles and miles of farmland.

We have seen more wind turbines. 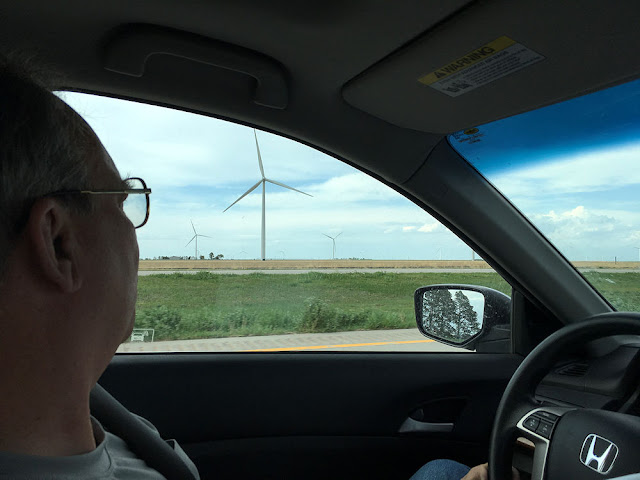 4.45 p.m. we have just passed the sign that said "Leaving Colorful Colorado"....

and shortly thereafter we passed the sign saying we were in Kansas. 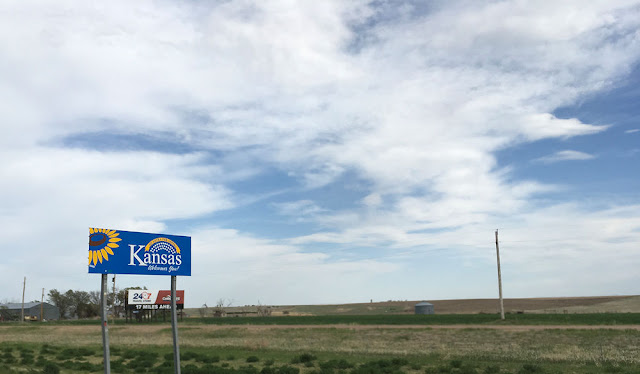 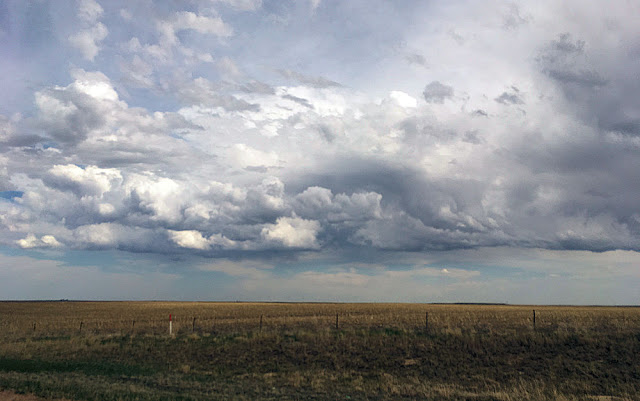 5.08 p.m. we have just reached our hotel and are in the room already.

Posted by DeniseinVA at 2:15 PM