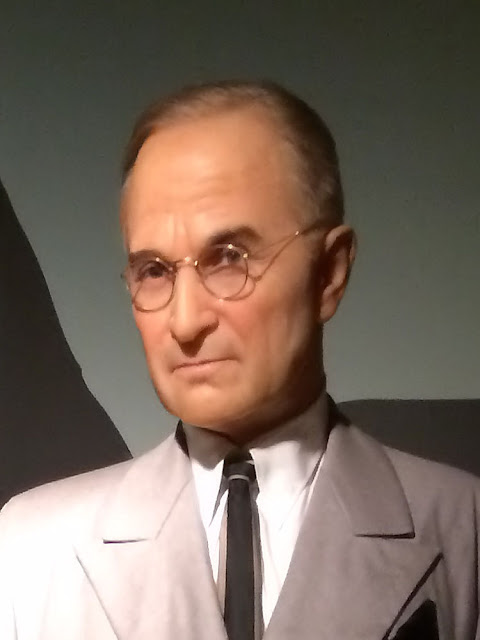 I thought I had gotten through all my presidents, but I wanted to share with Titus John White that I did in fact take a photo but forgot to put him on my last post.  As Titus John mentioned he was a distant relative of Harry Truman, I said I would share his wax figure at the beginning of this post.  Here you go John.  You can read John's comment here.  Just scroll down until you find his name, Titus John White. 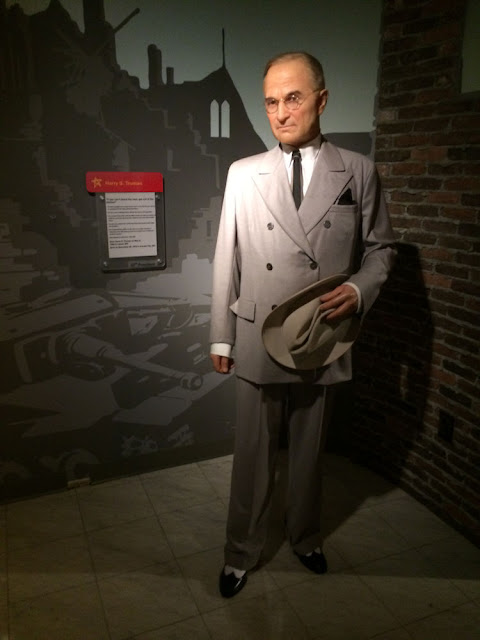 Harry Truman became our 33rd President on April 12th, 1945.  He was born on May 8th, 1884 and grew up on the family farm in Lamar, Missouri.  He had very poor eye sight which kept him out of West Point.  Instead he enlisted in the National Guard and was an artillery commander during WWI.  You can read more about him at this link.

This is Frederick Douglass.
He was an African-American social reformer, abolitionist, orator, writer and statesman. 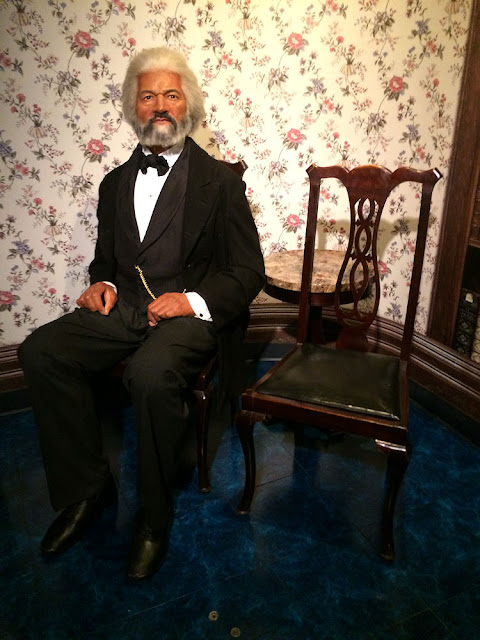 Juliette Gordon Low.
Founder of the Girl Scouts of America 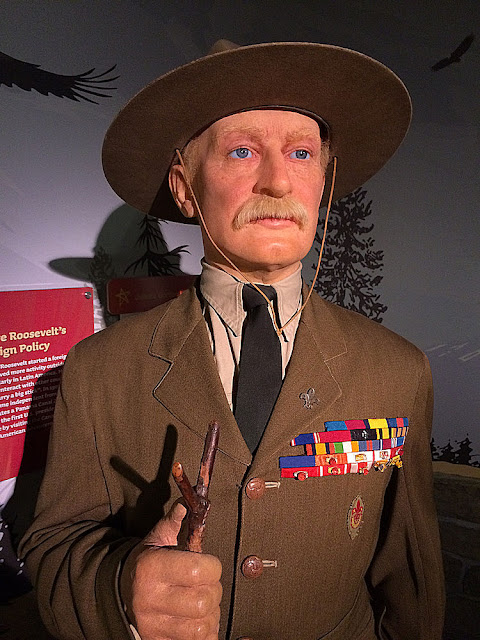 Rosa Parks.
Congress called her "The First Lady of Civil Rights" and "The Mother of the Freedom Movement."

Martin Luther King Jr.
Mr. King was an American Baptist Minister and activist, a leader in the Civil Rights Movement. 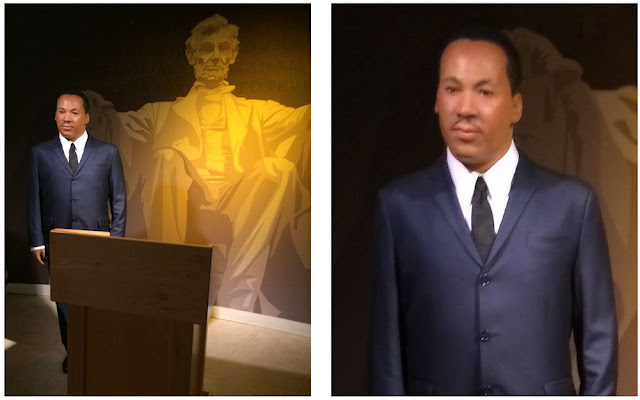 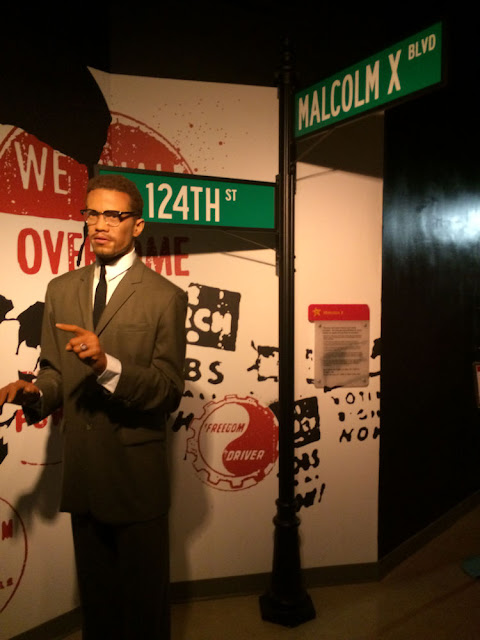 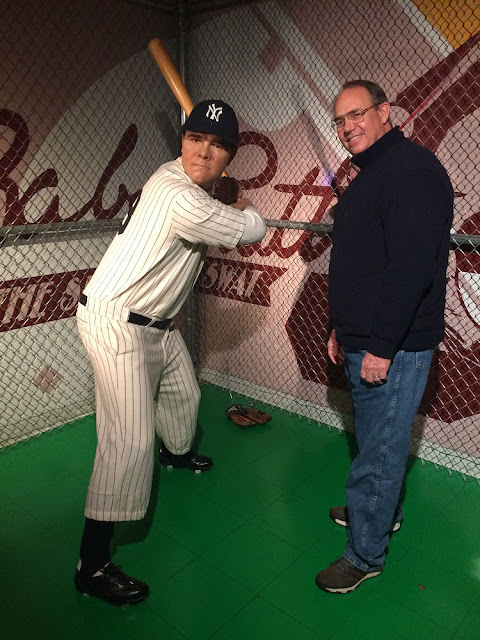 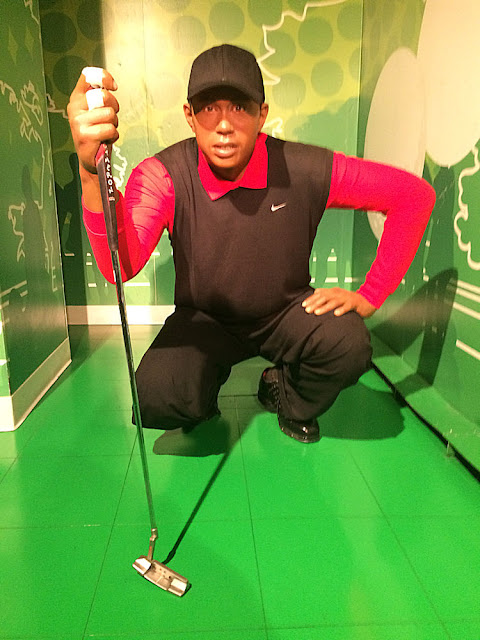 and Alex Ovechkin, the Russian Ice-Hockey player for the Washington Capitals of the National Hockey League. 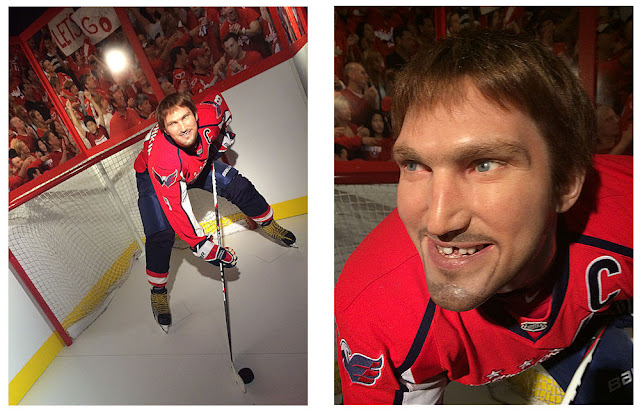 Fidel Castro was standing not too far from President Kennedy. 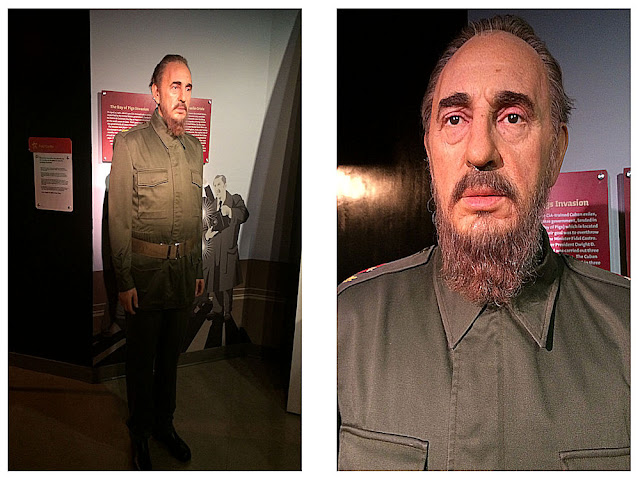 Here come more celebrities.  You can sit with George.... 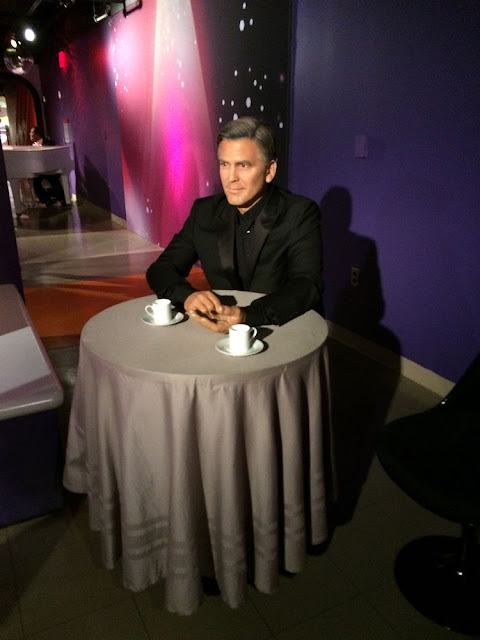 and chat with Samuel, Brad, Zac or Tom. 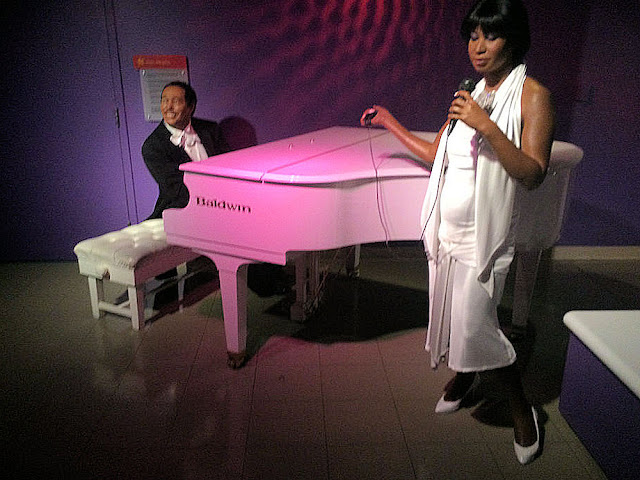 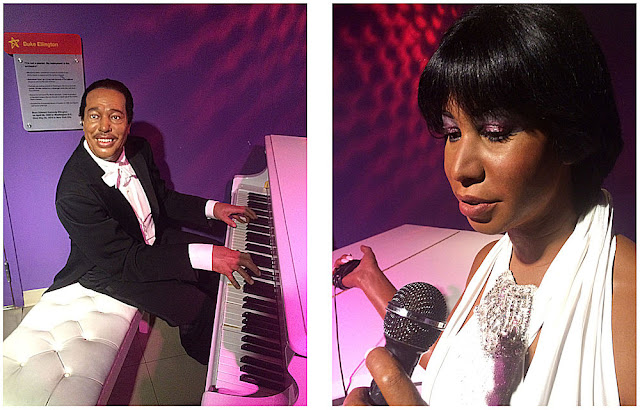 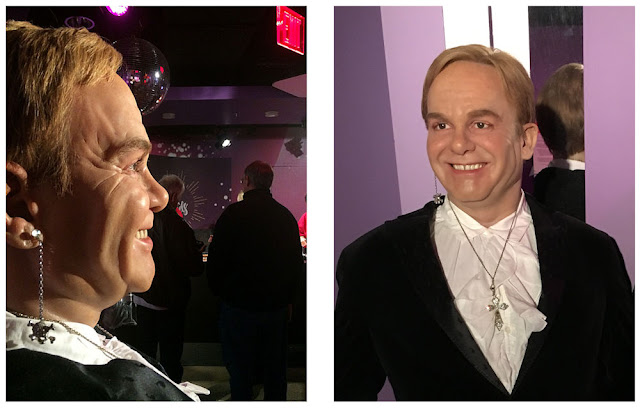 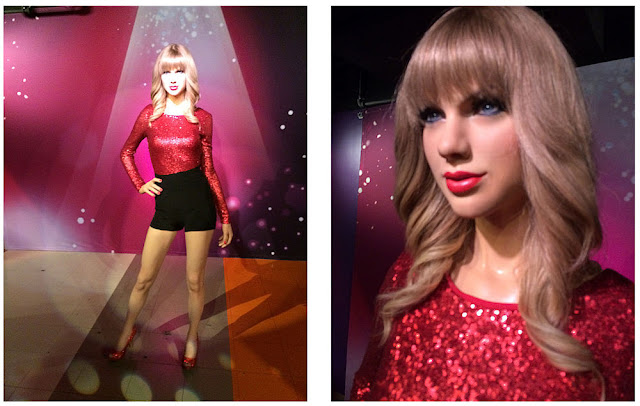 There were other celebrities such as comedian and talk show host Stephen Colbert.

Another in the same line of work, Jimmy Fallon.

Lovely to see Al Roker from the Today Show.

The last notable personality before we exited the exhibit was Larry King.  I took my photo.... 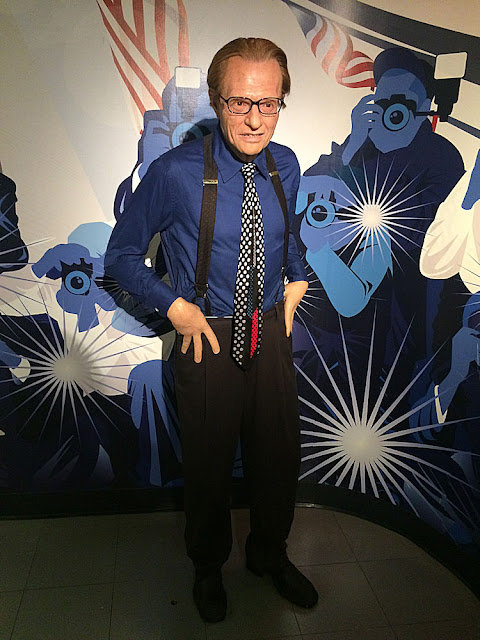 and as I turned the corner I noticed an elbow first, and then the camera.  It was a lady taking a picture of Larry and I said, "Oh excuse me...." and held back so that she could take her shot.  Well, I was saying to myself, I thought I was a bit picky for lining up a frame.  I had been standing there for a while.  Gregg, Cuz and her husband had gone on ahead of me but I stood back.  I must have waited for at least five minutes and finally my patience slid a little.  I popped my head around the corner and said, "Excuse me, would you mind if I went by?......"  As I looked into her waxen face I heard laughter coming from a few feet away.  Gregg was saying to the staff, "Well, she's English you know, she's very polite."  More laughter as I looked again at the lady taking the photo of Larry King.  The joke was on me. 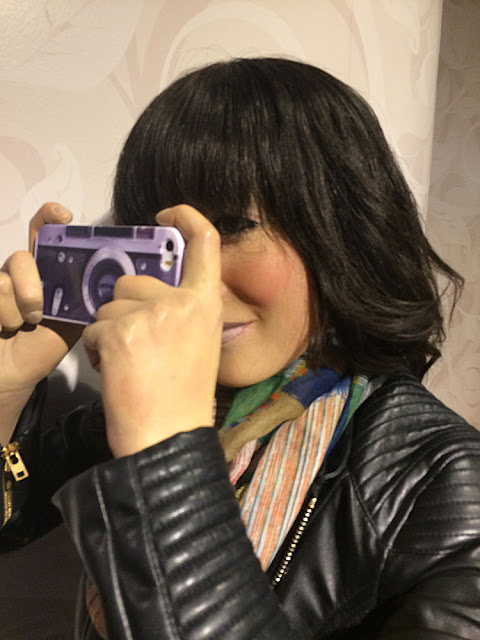 The person behind the counter said they had had a lot of laughs because of their wax figure photographer, but no one had waited as long as me.  Finally caught out.  Either I need glasses (yes I do need a new prescription) or that wax figure photographer was an amazing likeness yet again, and that outfit I would have coveted in my youth. 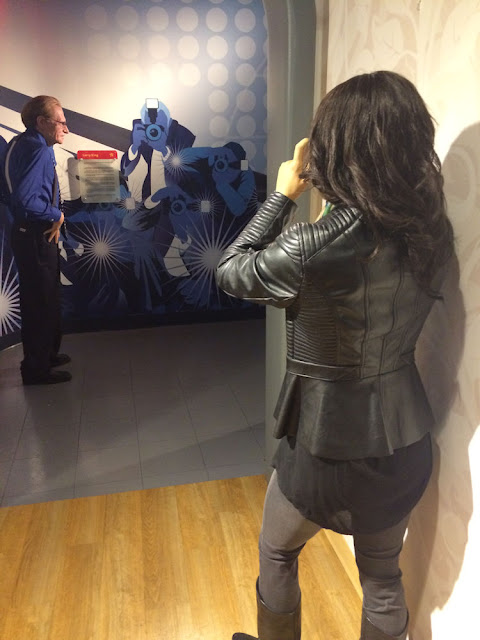 I felt a bit like Grumpy Cat, not really. Yes they even had a wax figure of him. 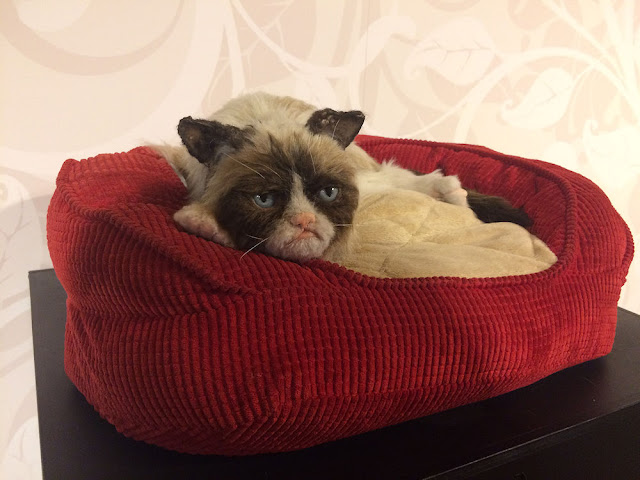 So there you go, very photo heavy but I wanted to share my last post of Madame Tussauds.  Hope you enjoyed it.

You can click on the names in red to read more information.

Posted by DeniseinVA at 7:57 AM