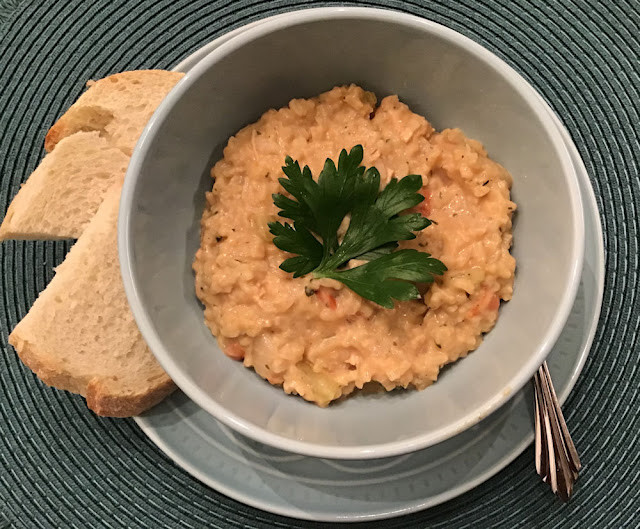 This was delicious.  Unfortunately I can't remember where I got it from and can't offer a link today.  We made a few changes which I will share below the recipe.

In a large soup pot, heat oil over medium-high heat.

Add onion, carrots and celery and cook and stir for 3-4 minutes, until onion begins to turn golden.

Stir and bring to a boil over medium-high heat.

Reduce heat to medium-low (a simmer), cover, and cook for 30 minutes, stirring every 10 minutes, or until vegetables and rice are tender.

Remove chicken from pot and shred.

Add back to the pot and stir in evaporated milk. 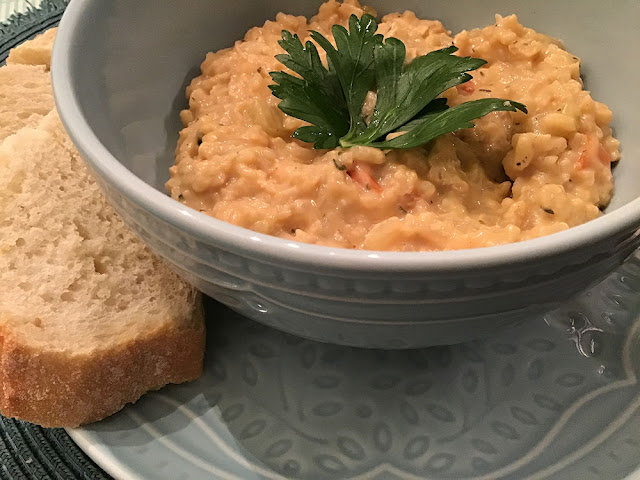 A great Fall weather soup and we thought this was one of the best we have made.

But, when I first took the cover off the pot, my first reaction was to say, "Oh!"  There wasn't much broth left and it looked more like a risotto consistency than soup.  Next time I would have a little extra broth on hand to pour in if needed.  We had no more in the pantry.  This is entirely due to our own taste and you may think differently if you make it, as a soup, but we loved it.

Also we might put in less rice as it obviously absorbed much of the broth.  I suppose we could have cooked the rice separately and added it at the end, but the whole point was for the rice to pick up the flavor of everything it was cooked with.

We used white rice instead of brown.

We doubled up on ingredients as it was our intention to eat this over a few days, and also put some in the freezer.  It freezes well but perhaps with a few changes - *see the paragraph on freezing below.

It would be easy to turn this into a vegetarian dish for those who don't want to use meat, and then of course you'd use the vegetable broth.

I wasn't sure about using evaporated milk but I needn't have worried.  It was great.

As we doubled up on our ingredients, we thought it might be a good idea to use 1 can of evaporated milk and using the same can filled with 2% milk (but see notes in the next paragraph).  We also said instead of the milk, thought we would try a can of coconut milk next time.

*If you are going to freeze this soup, I remember reading somewhere that using a higher fat milk is better rather than the low-fat that I normally use.  Low fat tends to separate during the freezing process, and when heating it up from a frozen or thawed state.  Better to use whole milk for instance, or even cream when you know you might be putting what's left in the freezer.

If you run out of broth you can use water and a bouillon cube, using the instructions on the packet or jar.

Adding corn would be a nice addition to this soup.

There are approximately 332 calories per 1-1/2 cup of soup.  Not exact, just a guideline.

Even as a surprise 'risotto' we gave our meal a ten out of ten.

We served it with a slice of Italian bread, and the next day I made Chile Cheddar Biscuits.  That recipe will be posted next Monday.

I also added a few leaves of cilantro for garnish.  Not just to pretty it up a bit but I like the taste.

Thanks for looking, have a great week and... 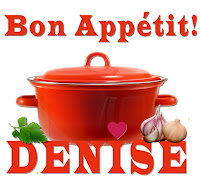