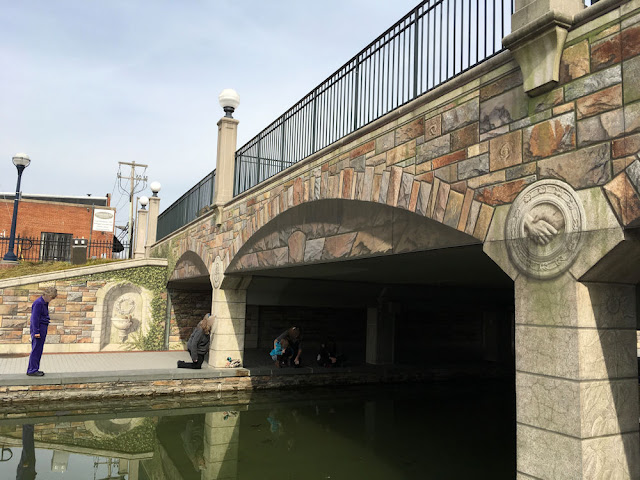 I posted a similar photo shown above in my previous post, but in this one there are two extra people on the left.  One of them is staring at something on the wall and my attention was drawn to the object that took her attention. 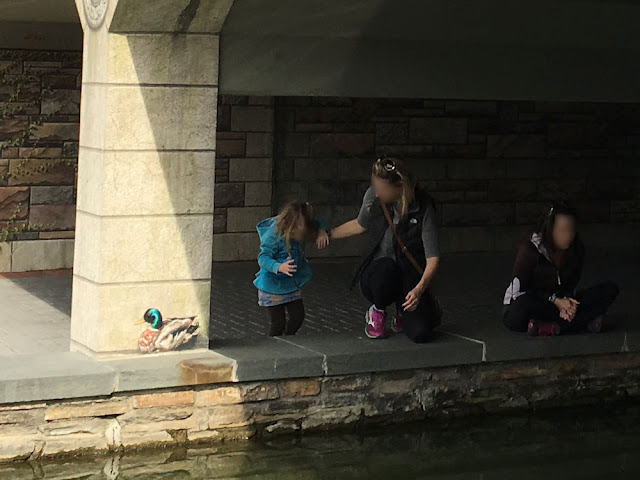 A Duck!  It took me a few moments to realize that it was another painting, and when we finally walked around to the other side, I got a closer look.  These artists are very talented. 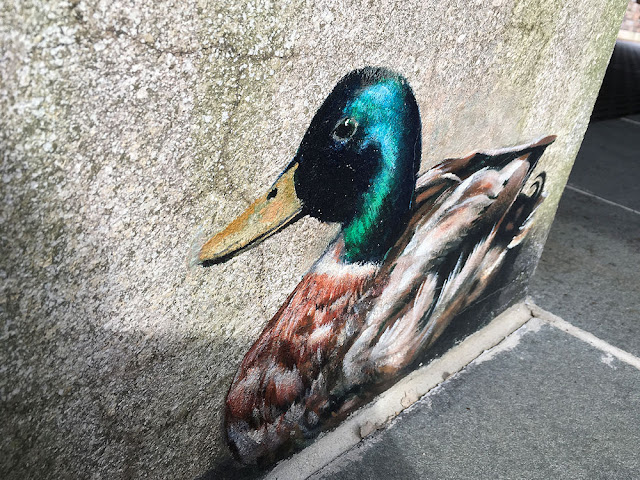 Here's one of the real ones swimming up and down. 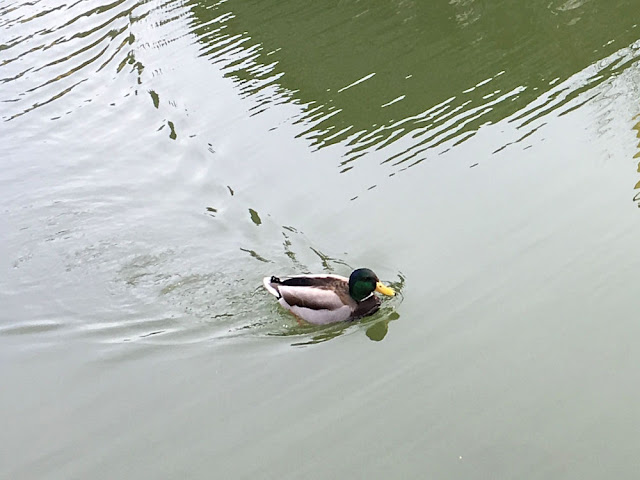 Here are those painted bricks I talked about in my other post.  If you missed that one you can find it here. 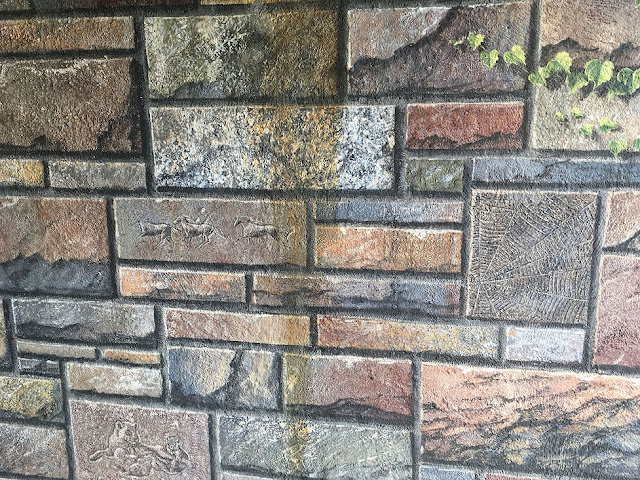 The stories behind the symbols are on this page of the website.  I didn't take photos of every symbol on the bridge, and could not match up a few to what I read on their page.  However, I have posted what I did find.

"This knot reminds me of the spirit of the community for many reasons: because it represents a continuum, it closes the loop, it is like a hand-off from one to the other.  It is like a spiral, always overlapping, yet it never ends.  It is a symbol of energy." 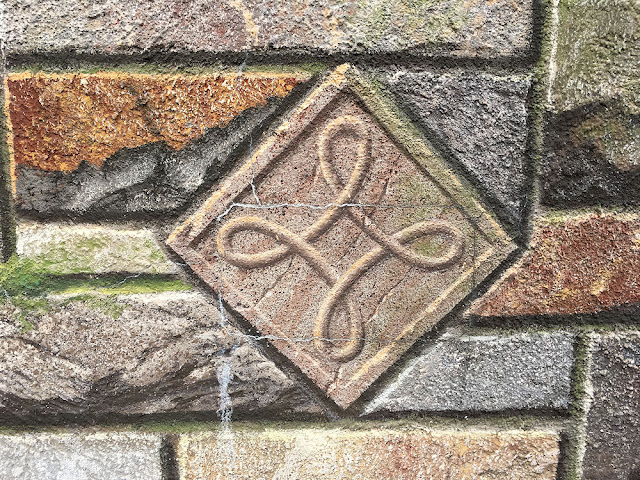 I didn't get the following information about the coins on the above website, just a general search on Google.

The Lincoln cent, sometimes called the Lincoln penny, is a one-cent coin that has been struck by the United States Mint since 1909.  The obverse, or heads side, was designed by Victor David Brenner, as was the original reverse. 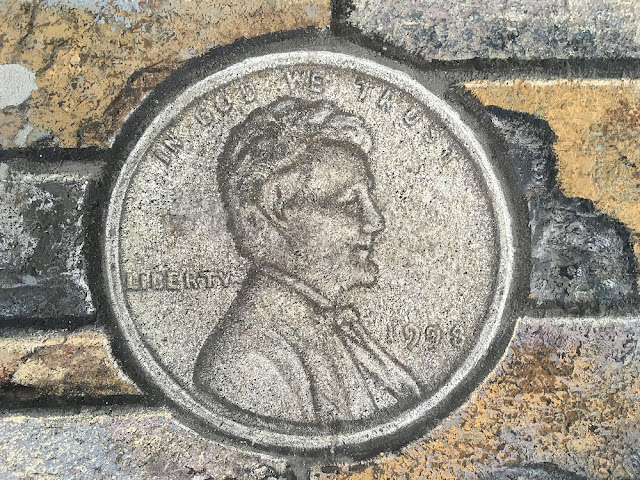 The Buffalo nickel or Indian Head nickel, is a copper-nickel five-cent piece that was struck by the United States Mint from 1913 to 1938.  It was designed by sculptor James Earl Fraser.  As part of a drive to beautify the coinage, five denominations of US coins had received new designs between 1907 and 1909. 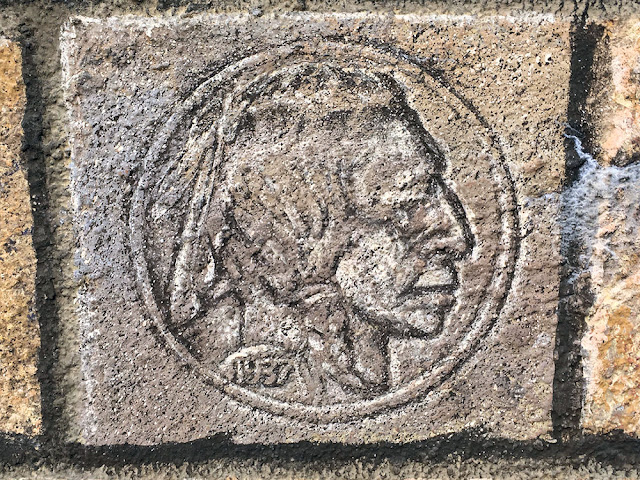 The actual time it took Mr. Cochran and his ten assistants to paint all these amazing works of art was a total of five years. The ivy fascinated me.  I learned that one of William Cochran's assistants took six months to paint those ivy leaves alone. 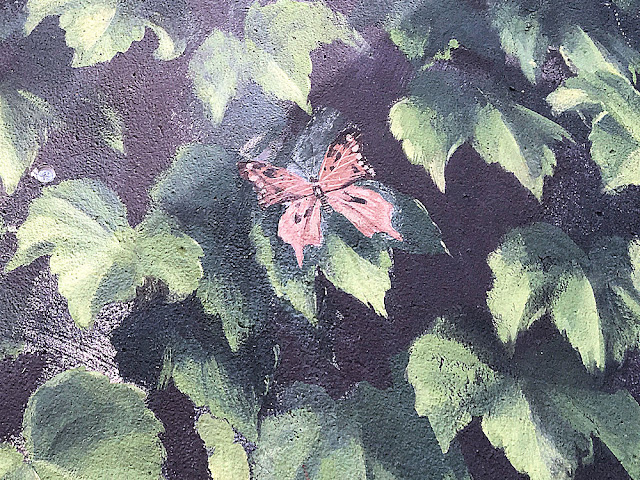 Passing by one of the columns I almost missed the sunflower. 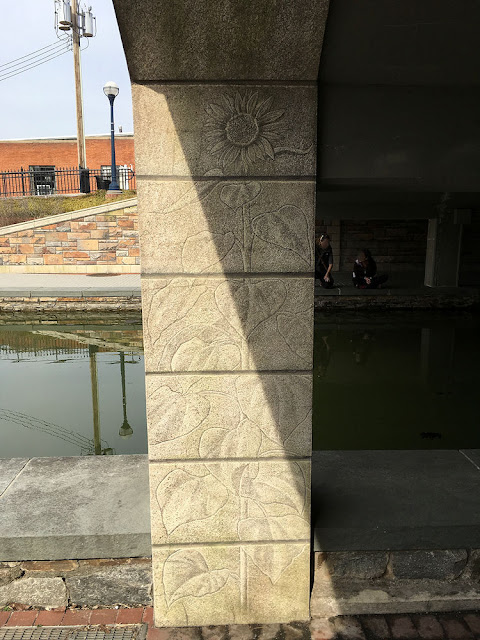 Here are more of the symbols. 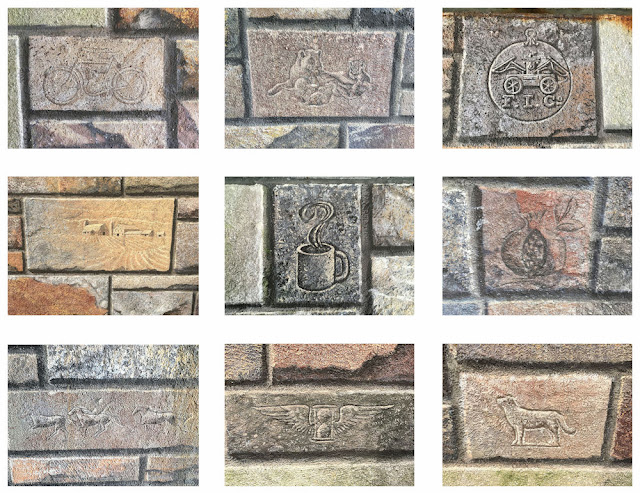 This one of people entwined comes from an actual design adapted from The Book of Kells. 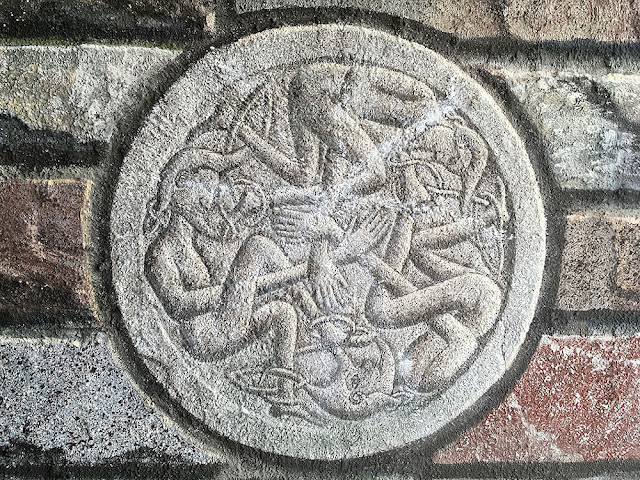 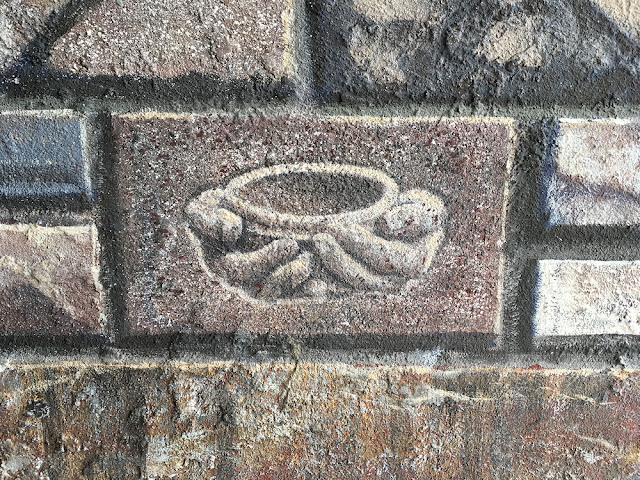 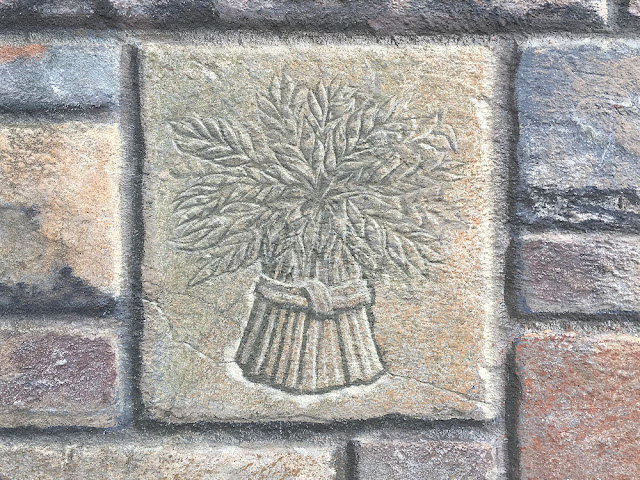 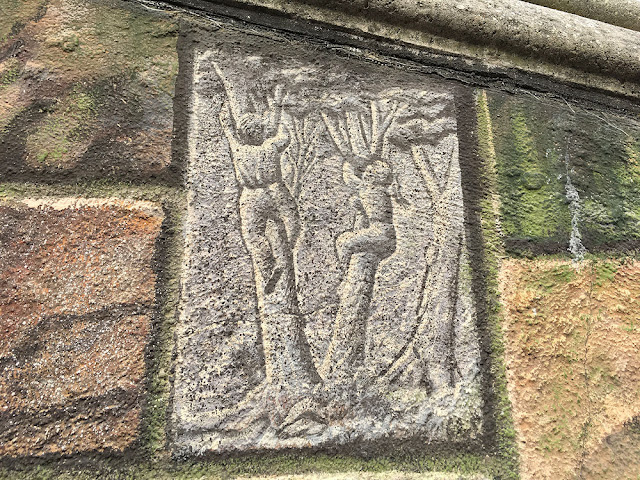 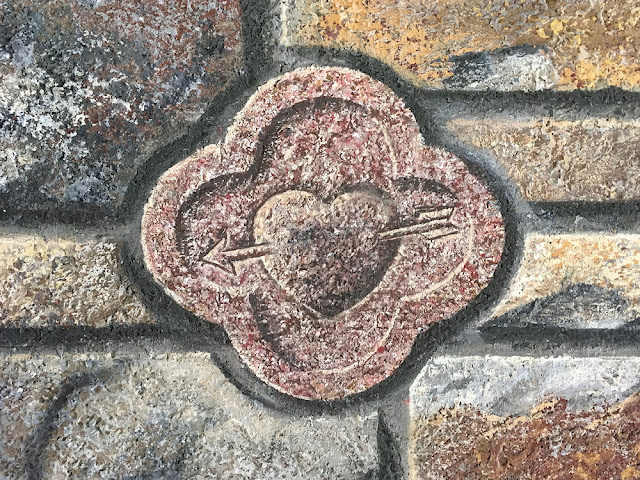 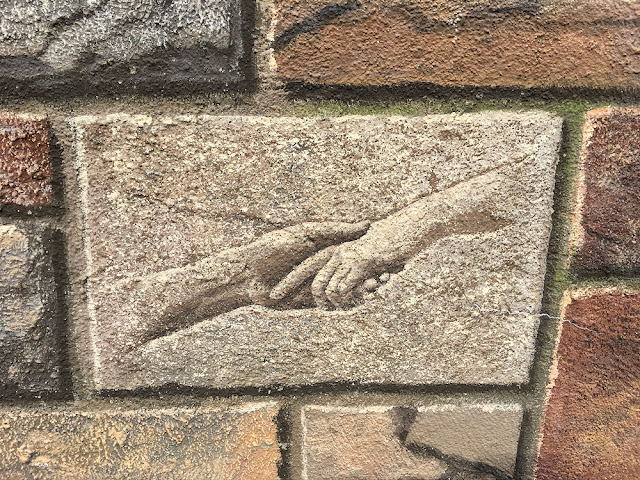 Chameleon
"The Chameleon has the ability to alter to suit its needs.  A community should be able to change in order to suit the needs of the people involved."  Julie O, 16, High School Student. 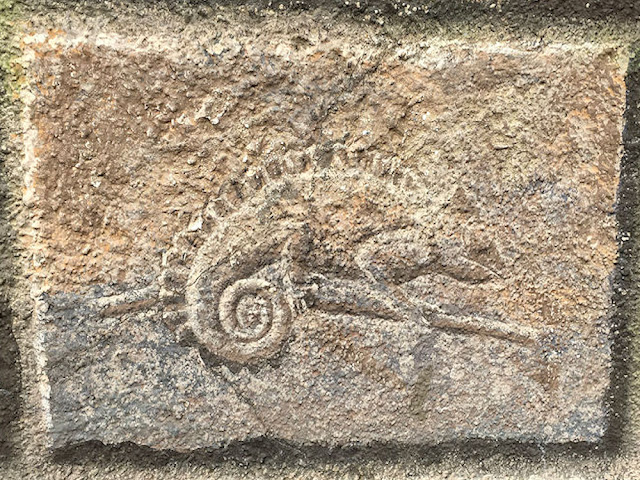 "The spirit of community is a sense of sharing and intimacy among those with common challenges.  Enclosed is the logo for the Frederick County Commission for Women.  The thistle - sometimes tender, sometimes prickly - grows undaunted all over the country."  Sandra West, Myersville 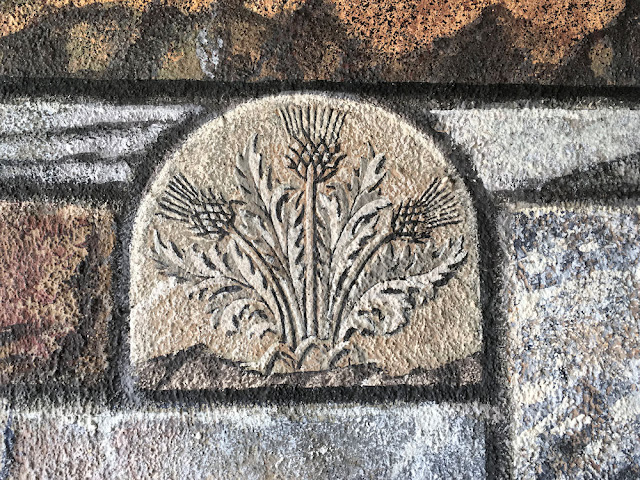 A few more symbols to end this part of my post. 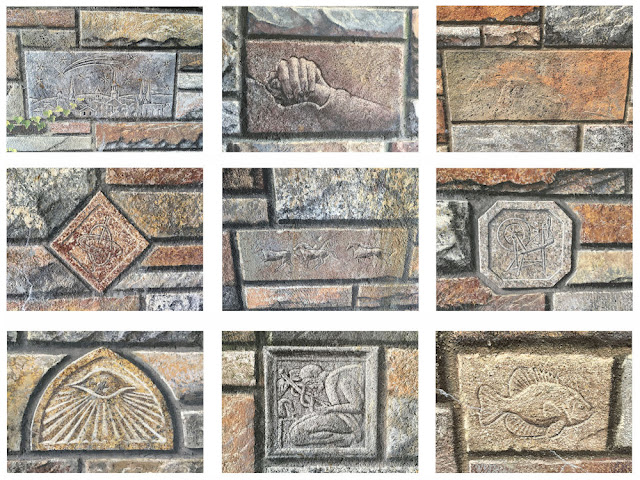 Another view of a bridge with the decorative clock that you may have seen here. 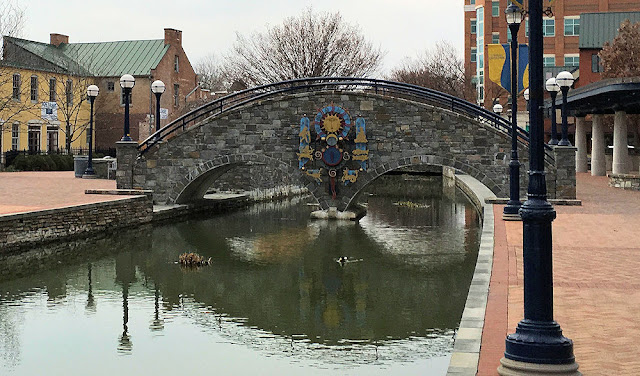 There were a couple of policeman patrolling the area on their Segways.  This is one of them in front of the very nice building that is the local library.  Must go in there next time.  If anyone is unfamiliar with a Segway, you can see one here.  There are different types these days.  There are Segway tours offered in Washington DC, and I daresay in many other cities around the world.  I would be interested to find out how popular they are.  A few years back when they were first being sold, we saw a man park his outside our local coffee shop.  I haven't seen any around here since, only when visiting DC.  It was fun to watch people in groups go by, and though they look like an enjoyable way to get around, I have my doubts that I could balance on one successfully.  I can be pretty klutzy truth be told. 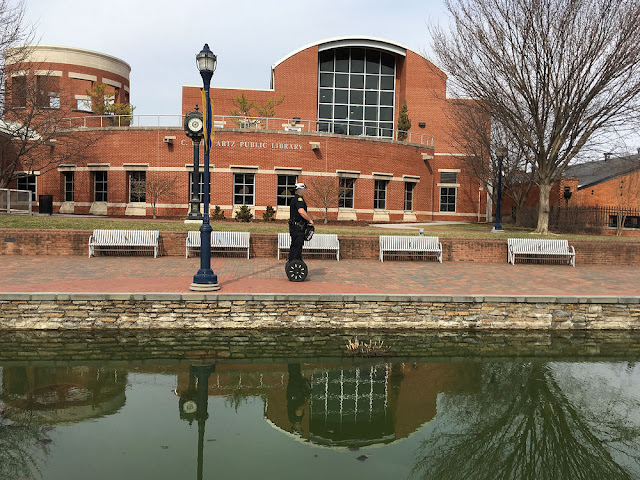 At this time of year when there are hardly any people on the Riverwalk, it is an ideal place to run with your four-legged friend. 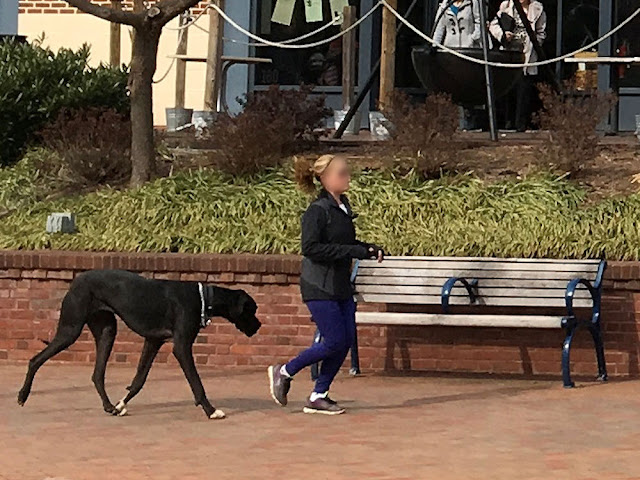 We walked over these metal grids with an oak leaf design.  I guessed that they covered a draining system down to the water, and its 'tiles' could be removed for easy access.  You can see my feet just in view.  I make no apologies for my scruffy shoes.  I take scruffy above style any day when it comes to comfortable footwear, at this stage of my life.  In my youth I remember spending a large part of my weekly wages on a pair of green satin, five inch stiletto heels with a pointed toe (winkle pickers was the term for them), and actually could walk in them quite well.  I loved them but they were a chiropodist's dream!  This was a few years before I met Gregg.  I wish I had kept them.  I would have had them in a glass case on a shelf somewhere.   Maybe just as well and I have no memory of where they went. 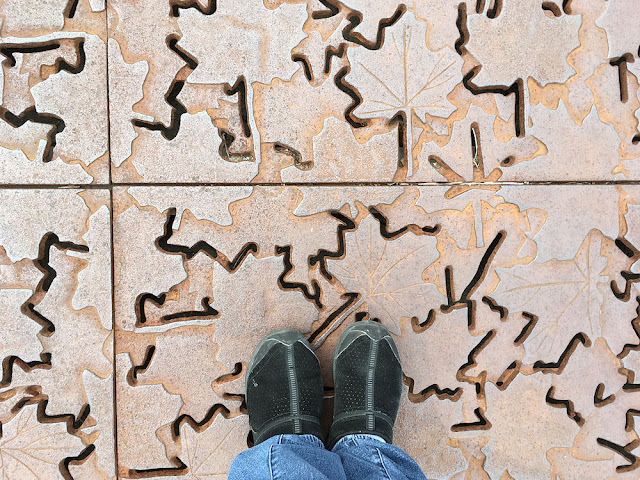 And that is the last of my photos from our trip to Frederick.  I am looking forward to going back in the warmer months, as I have seen photos of the water lilies and other flowers on the Riverwalk.  Gregg also wants to go to Gettysburg, which isn't too far away.  It has been several years since we went to Gettysburg.

Posted by DeniseinVA at 5:35 PM